Your guide to Novi Sad: Serbia’s upcoming Capital of Culture

Set on the Danube river, Novi Sad is Serbia’s sassy second city. As the European Capital of Culture for 2021, it will soon become a wish-list destination. Read our guide to get ahead of the crowds... 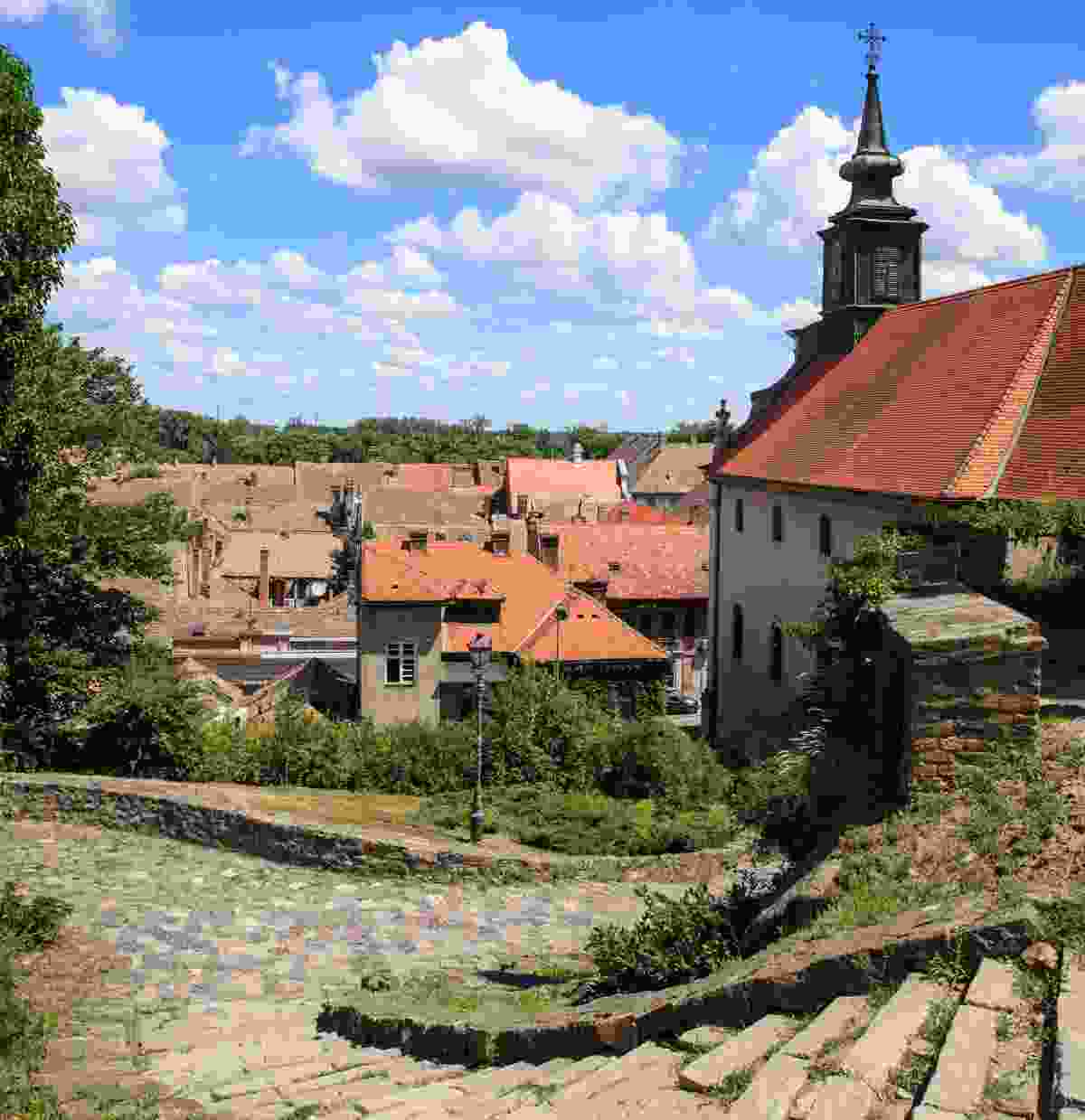 The Petrovadian Fortress is just one of many beautiful examples of Novi Sad's architecture (www.novisad.travel)

Elegant and easy going, Novi Sad is Serbia’s sassy second city. As a university town, it’s as lively and energetic as its big sister, Belgrade, but much more compact and accessible. The city is at its most lively during the annual EXIT music festival but fun can be had all year round at any of the city’s famous kafanas ­– traditional Serbian taverns.

Set on a strategic bend of the beautiful Danube river, the city has an elegant and refined side. During the 1700s and 1800s, the city blossomed into an unofficial capital for Serbian culture, and many of the city’s most impressive buildings, like the ones around Tg Slobode (Freedom Square) date from this time. The city centre is also jammed with beautiful baroque, Neo-Renaissance and Bauhaus buildings.

Just beyond the city lies Fruška Gora National Park, a gorgeous expanse of pasture and woodland, dotted with ancient fortresses and Orthodox monasteries and braided with vineyards. Easy to explore by foot or by bike, the region is famous for its salaši – traditional farmsteads where you can enjoy hearty rustic meals or even stay the night.

Where is Novi Sad?

Novi Sad is the capital of Vojvodina, an autonomous region in Northern Serbia, home to 23 different ethnic groups. The city sits beside the Danube – up river from Belgrade, down river from Budapest – and is surrounded by forests and farmland. 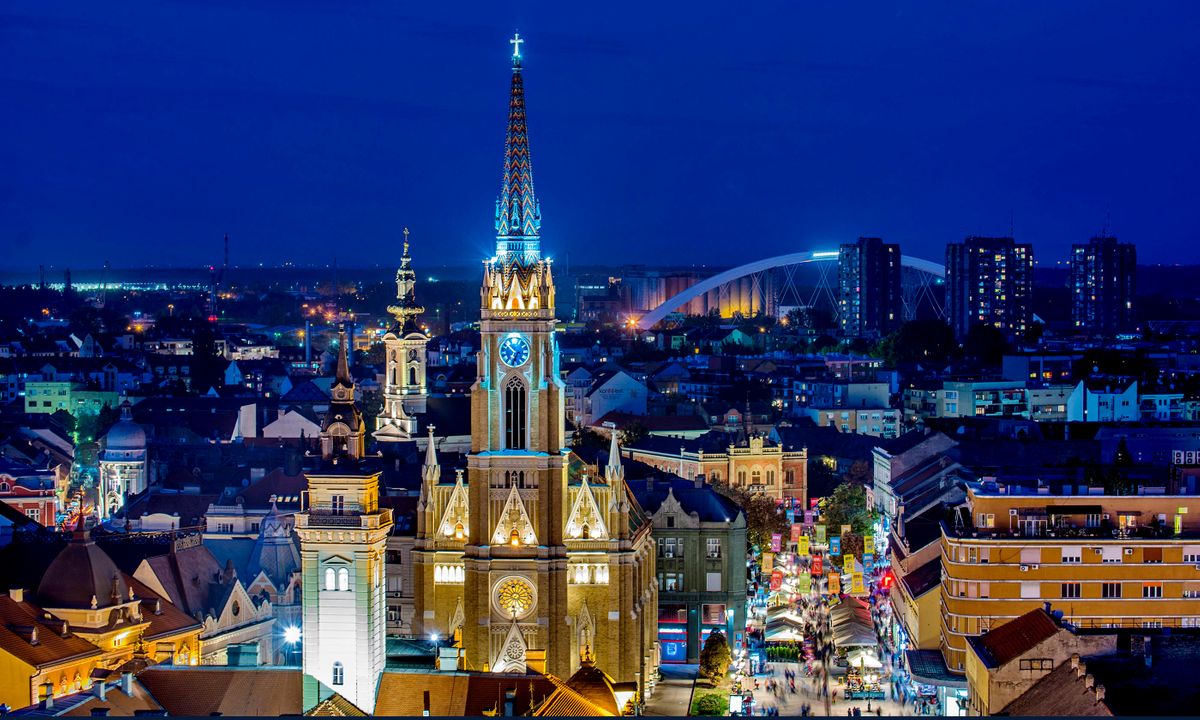 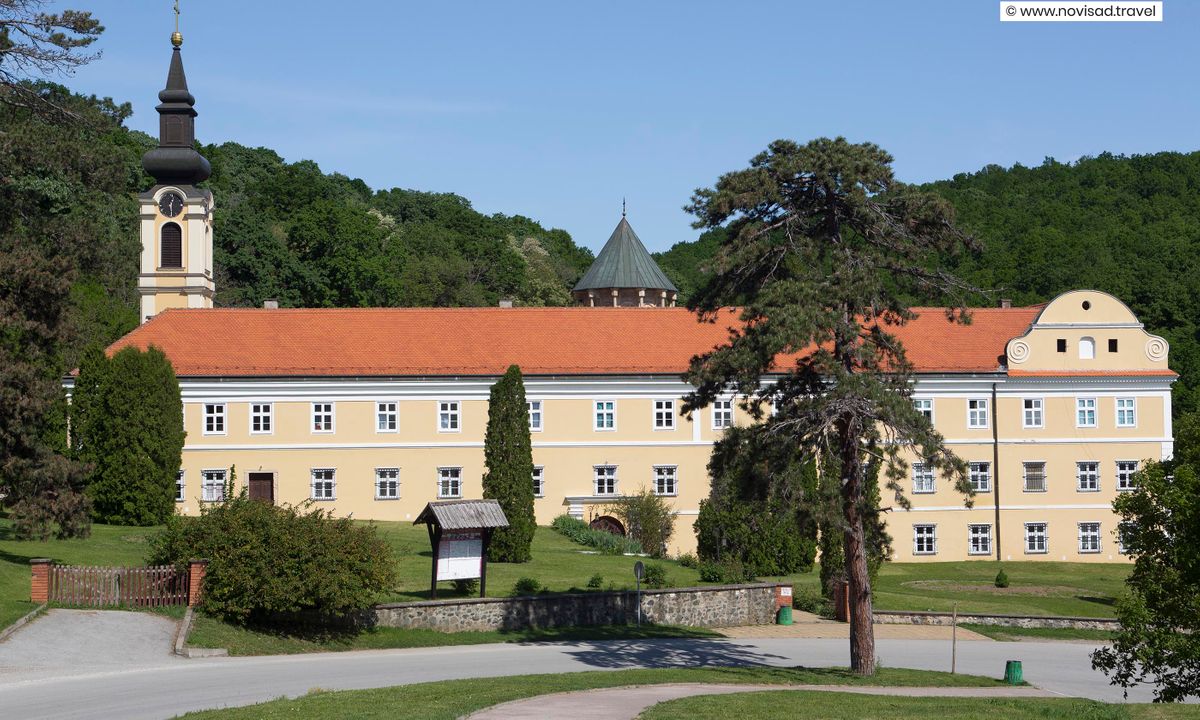 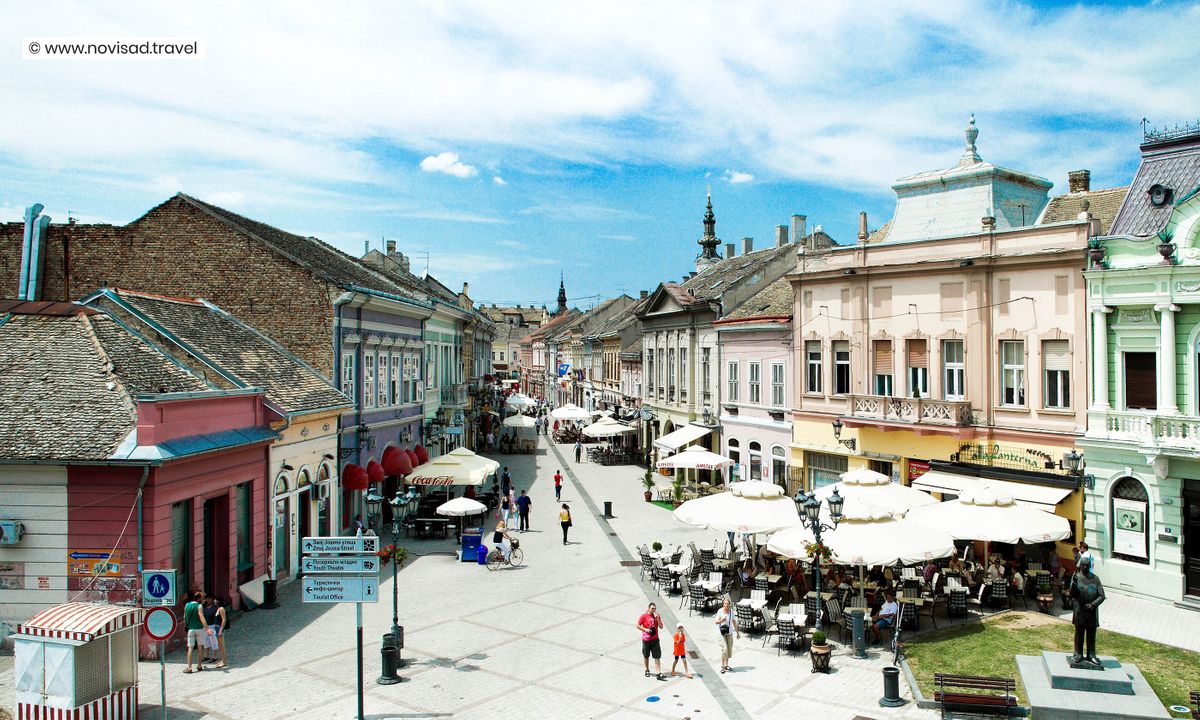 “Novi Sad is the European Capital of Culture in 2021. It is the first city outside of the EU to be awarded the honour. Its theme is ‘Four New Bridges’, celebrating the European values of Hope, Love, Freedom and Diversity.”

Things you must do in Novi Sad

1. Stroll through the city's history 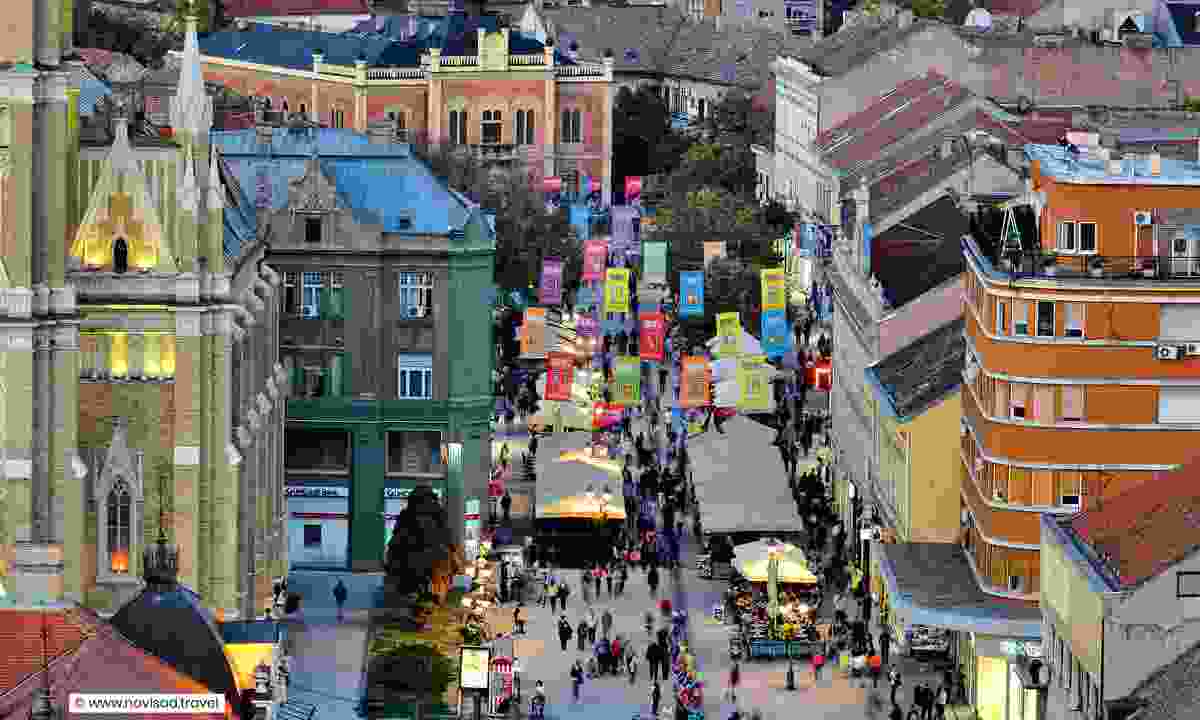 Novi Sad is perfect for exploring by foot. Indeed, most of the city’s most famous attractions can be reached by following Zmaj Jovina, a lively pedestrian thoroughfare that stretches from the main square, Trg Slobode, to Dunavska Park and the bridge to the Petrovaradin Fortress.

Along the way you’ll pass Bishop’s Palace, the Synagogue and the Name of Mary Church with its beautifully tiled roof. There are plenty of cafés for you to stop and and watch the world go by – and rostilj (barbecue restaurants), serving ćevapčići to sustain you to the end.

If you’d prefer, the city offers a free walking tour, starting at the national theatre and ending at the fort. It’s a great way to see all the highlights and pick the spots you want to go back to. Donations are appreciated.

Sitting high above the Danube, with commanding views up and down the river, the Petrovaradin Fortress is one of the largest and best preserved fortresses in Europe. Regarded as a masterpiece of Baroque military architecture, locals call it the ‘Gibraltar of the Danube.’ It houses the City Museums of Novi Sad, the Academy of Arts, an astronomy observatory and planetarium, the city archives and 16 kilometres of underground tunnels.

It is also where you’ll find the Fine Art Circle – the largest informal colony of artists in the world. For more than 50 years, artists have gathered here, using the space to pursue their artistic dreams. 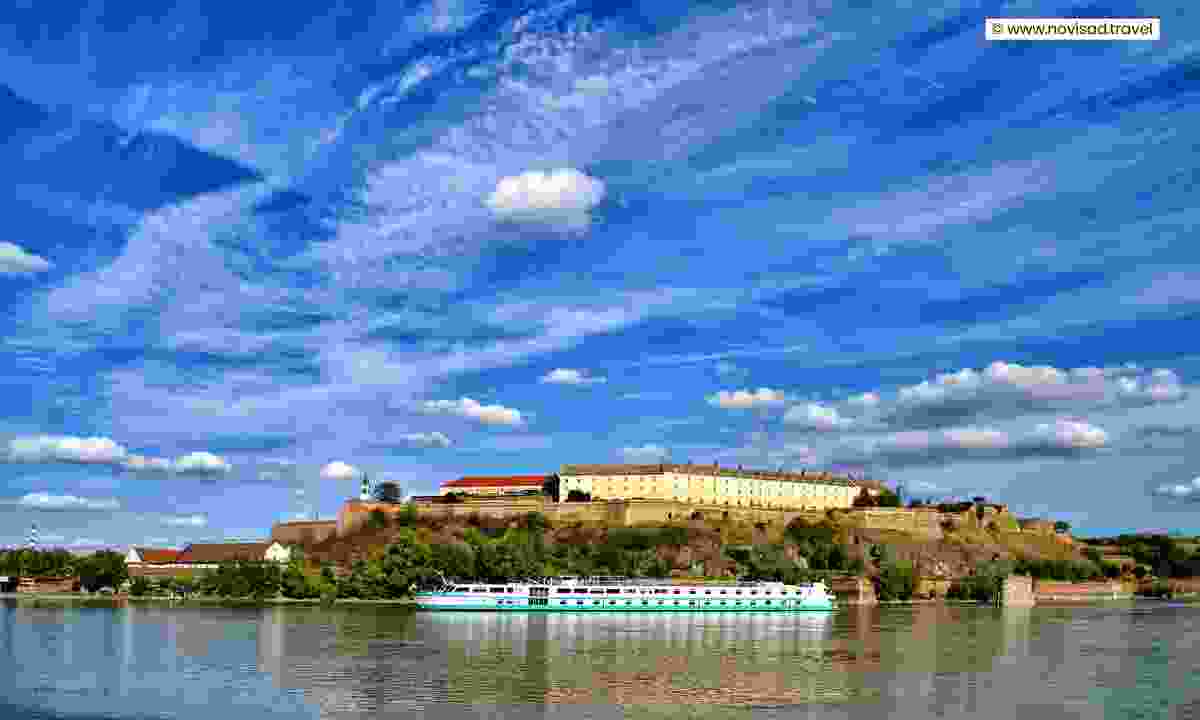 The Petrovaradin Fortress from the river (www.novisad.travel)

“Look out for the Petrovaradin clock tower, set on a square in the fortress, with epic views over the Danube. It is also known as the Drunken Clock because the big hand tells the hours and the little hand the minutes. Legend has it that the clock was made this like this so that fisherman on the river below could tell the time from further away.”

3. Take in a concert

Novi Sad is a musical city, with festivals held throughout the year. The most famous is EXIT, a modern music festival that takes over the Petrovaradin Fortress and spills out across the city every July. It started as an electronic music festival but has now embraced other types of music, making it one of the biggest music festivals in Europe.

More traditional musical tastes are catered for as well. April sees the Nomus Festival, where classical music fans are treated to concerts held in many of the city’s most impressive buildings. There’s a Festival of Street  Musicians in August and a Jazz Festival in November. If Latin music is more your style, you’ll love Dani Brazila – a samba carnival held every August. 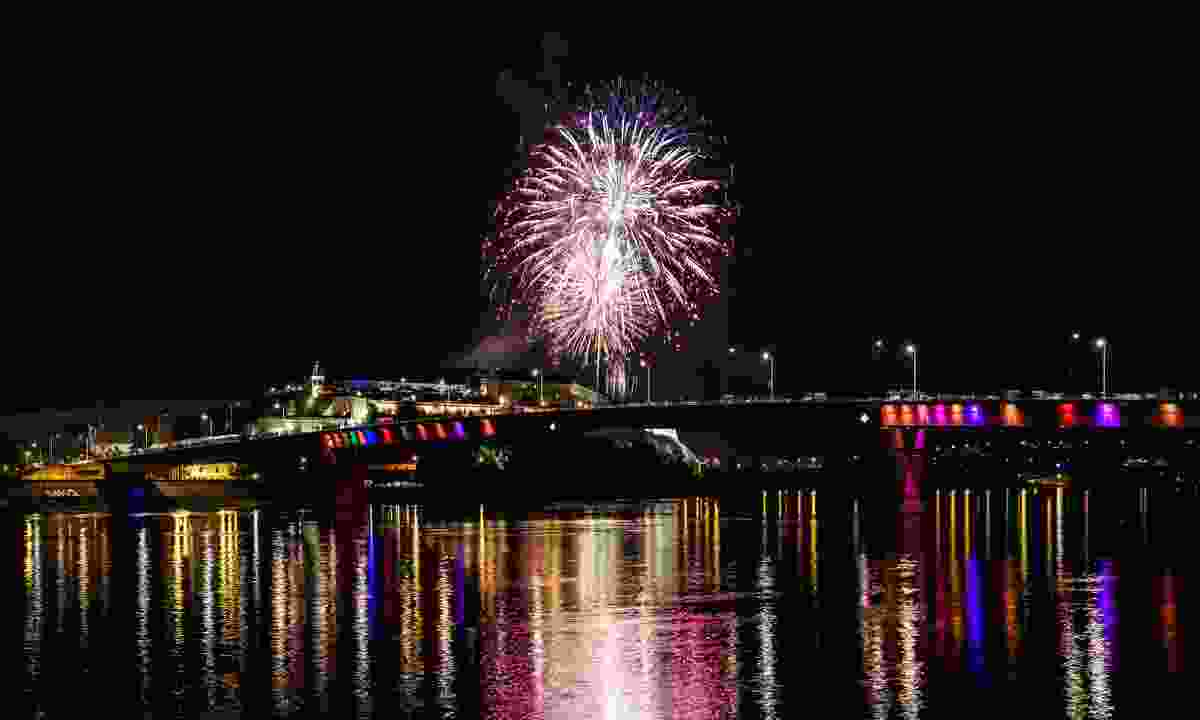 “The EXIT Festival began back in 2000 as a protest movement against the government of Slobodan Milošević. He was overthrown in October of the same year.”

4. Sun yourself on the Štrand 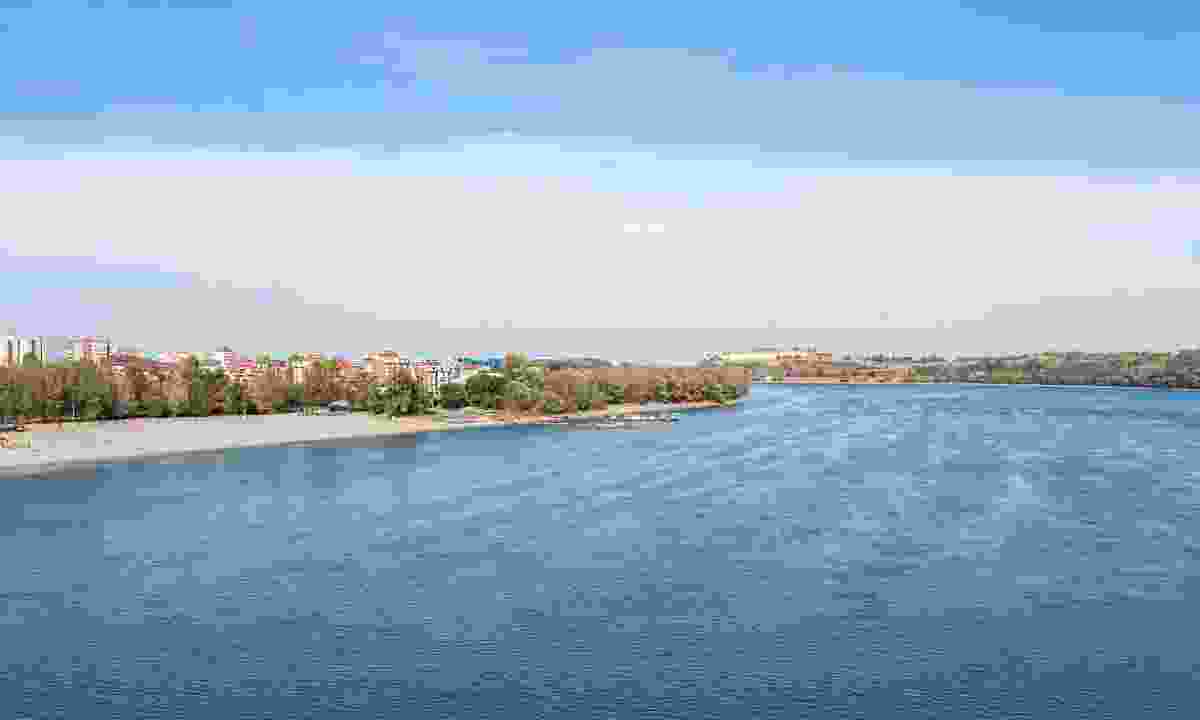 A view over the Štrand beach (Dreamstime)

The Štrand is a sandy beach along the Danube that becomes a hive of activity during summer when locals descend upon it to drink, eat and  hang out. During the EXIT Festival DJs perform live sets on the beach.

The beach is at its busiest between May and September, but is lovely at any time of the year. Swimming is possible, but take care. The currents of the Danube are surprising strong so a quick splash and paddle to cool down is advised.

5. Dine at a riverside čarde

Čarde are rustic riverside taverns where you can eat well at a slow pace. At a čarde meals are savoured, enjoyed in good company and accompanied by music – usually played on the tamburica, a mandolin-like instrument common in this part of the Balkans. You’ll find čarde all along the river near Novi Sad and beyond. Just follow the music and the sound of raucous laughter.

Opening hours are usually roughly around meal times. Don't expect written menus: dishes are usually determined by the catch of the day, from traditional fish specialties like white fish soup or pork belly škembići (chitterlings) soup, to (if you’re really lucky) a soup made from the eight fish species of the Danube.

What you can count on, however, is a flagon of local wine to accompany your meal. And the best strudel you have ever tasted to finish it. Portion sizes are generous, so get ready to loosen your belt. 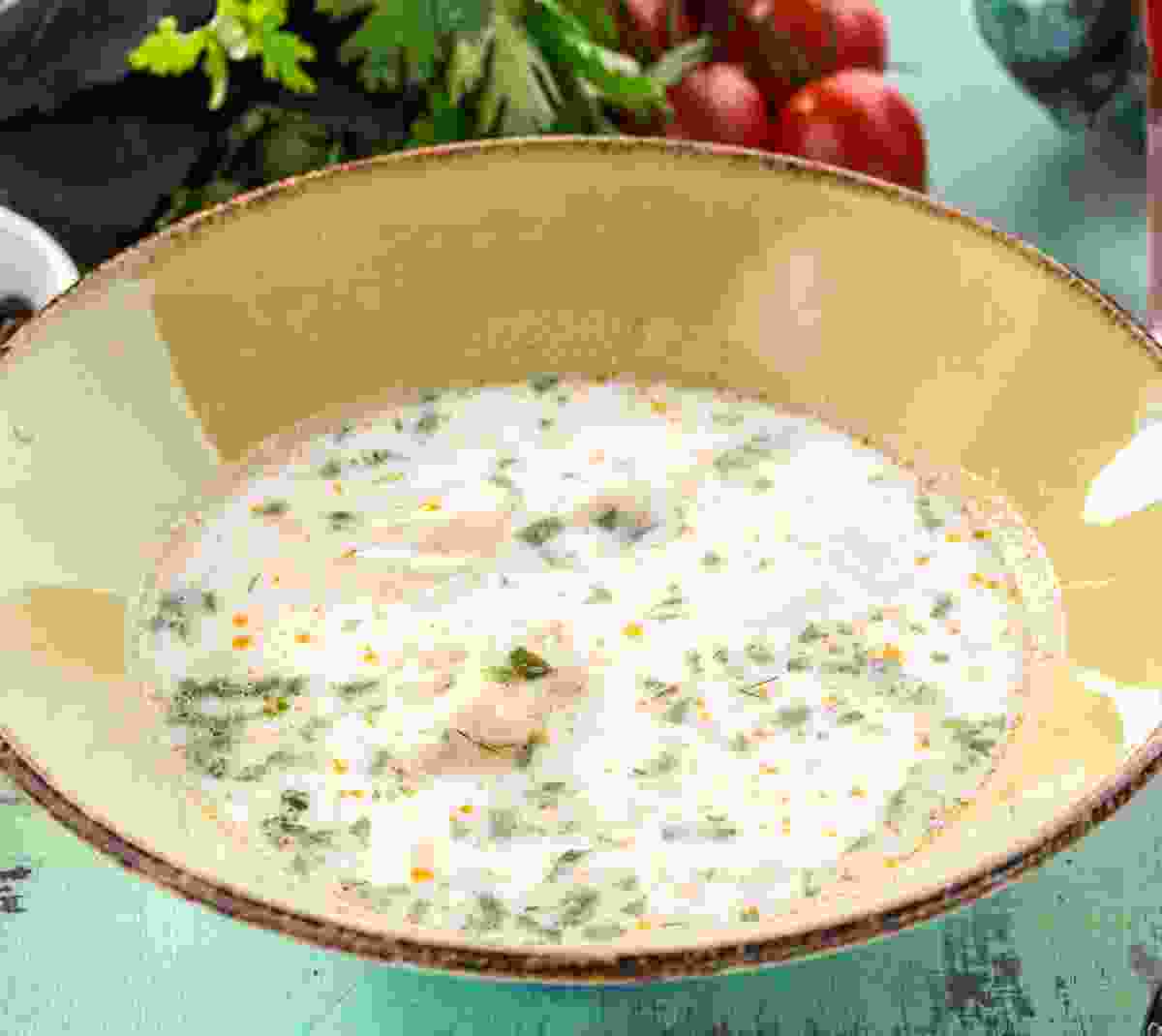 One popular option at the Čardes is white fish soup (Dreamstime)

“You must try the local Fruška Gora wines. Grown from vines first planted by the Romans, wines from Fruška Gora – served aboard the Titanic – are sort after in Europe. Varieties include Riesling, Neoplanta, Semillon and Sirmium. The local Bermet – a sweet wine that is said to have inspired many of Europe’s top poets – is still served with local and national dishes.” 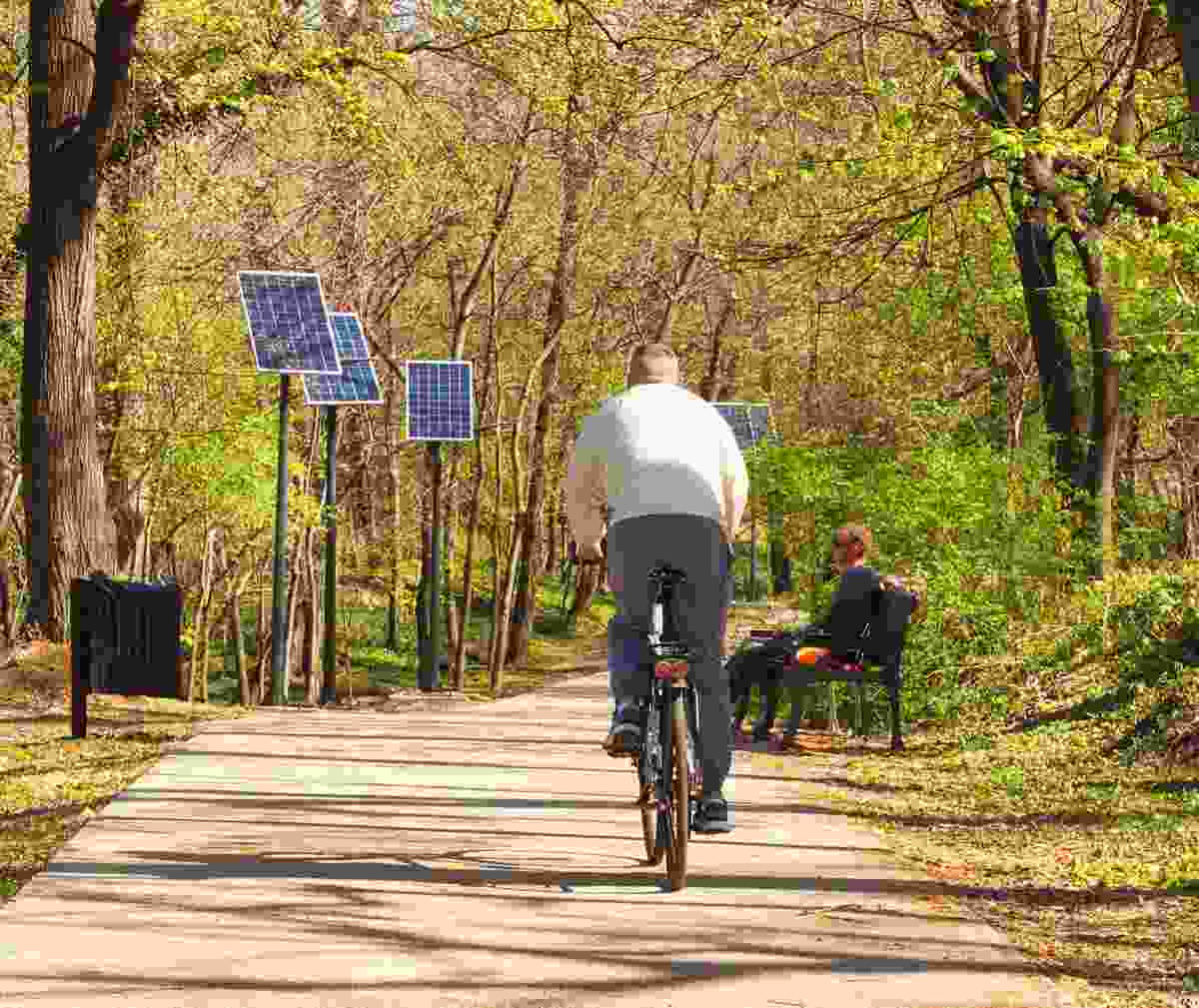 Enjoy a bike ride through the park (Shutterstock)

Novi Sad is a cycling town. Everyone rides a bike – especially as there are 233 cycle routes to explore. Cycling through the city is a breeze and a great way to take in all the sights. Dunavski Park offers pleasant rides beside the river, and the Štrand is the place to take a quick dip to cool down. Most of the cycle paths here are flat and well-maintained, used by locals and visitors alike.

Further afield, Fruška Gora National Park offers a variety of trails for cyclists. There are gentle trails that will take you through forests and past orthodox monasteries, as well as more challenging mountain bike trails that weave their way up rugged peaks and beside mountain lakes.

Novi Sad also sits on the EuroVelo6, a cycling path that follows Europe’s great rivers from the Atlantic to the Black Sea. You could follow the Danube section to all the way to Belgrade – or head in the other direction to Budapest.

“Novi Sad follows both the Gregorian and Julian calendars, making it one of the rare cities that celebrates two New Years: 31st December and 13th January. The city doesn’t stop partying for two weeks.”

Day trips out of Novi Sad

Novi Sad makes the perfect base to explore the forests and farmlands of Vojvodina and the ancient monasteries and Baroque towns that dot its landscapes. 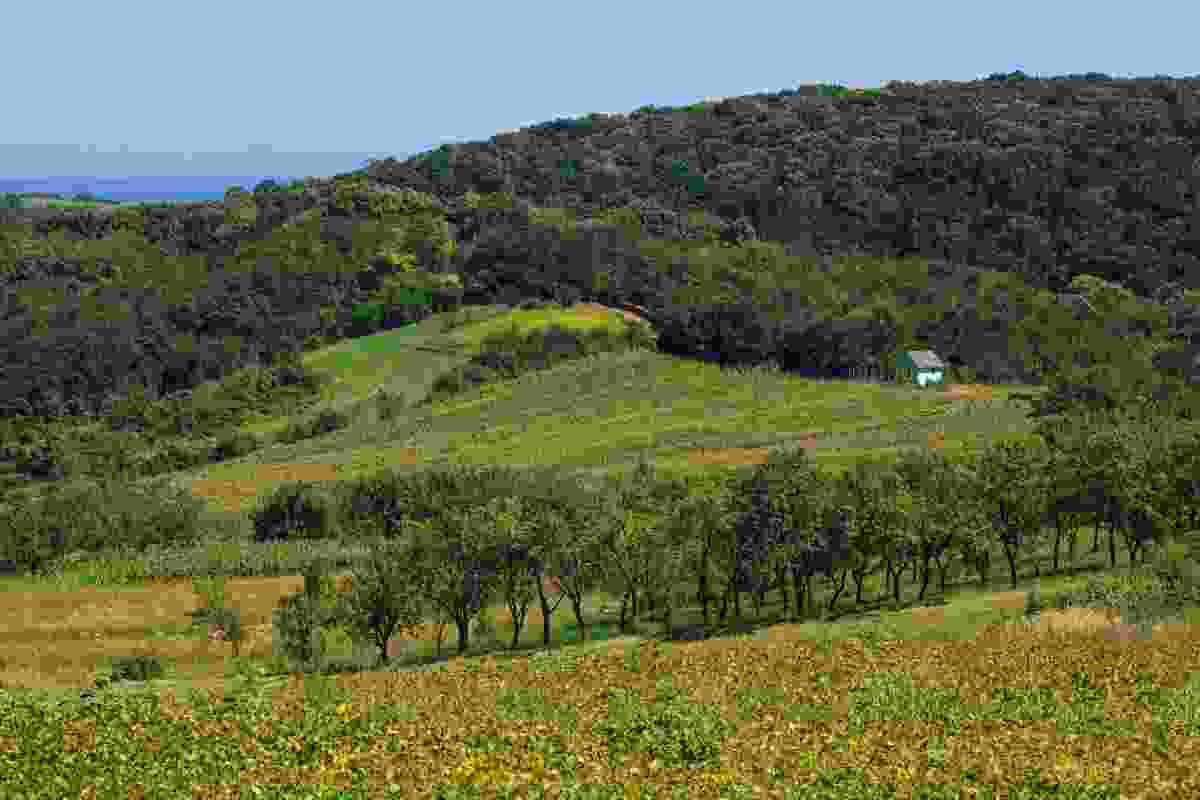 Half an hour southeast of Novi Sad, the right bank of the Danube becomes more mountainous as you venture into Fruška Gora National Park. A land of pasture and woodland, it is Serbia’s oldest national park, with plenty of hiking paths and mountain bike trails for you to explore.

As well as nature, there is history. Thirty-five monasteries were built here between the 15th and 18th centuries to protect Serbian culture from Turkish attacks, with more than 15 monasteries across Fruška Gora that you can visit all year round. There are vineyards producing wine from vines first planted by the Romans in 3 AD. And, more recently, the modern TV tower in the middle of the park was the first thing bombed during the NATO raid against Serbia in 1999. It rises, battered and forlorn, from the woods.

With its imposing red gate, ancient frescoes and immaculate grounds, Krušedol is perhaps the most impressive of the Orthodox monasteries you can visit in Fruška Gora. Founded in the early 16th century by Saint Maksim Branković and his mother, Saint Angelina of Serbia, it played a vital role in protecting Serb culture. It was declared a Monument of Culture of Exceptional Importance in 1990 and appears on the reverse side of the 5 dinar coin.

Despite the large-scale destruction of the monastery and many of its relics by the Turks, the original paintings remain on the dome's pillars. You can still find frescoes and icons inside that date back to the mid-1700s. Don’t forget to drop by the monastery’s ‘farm shop’ where the monks sell honey, rakija (fruit brandy) and wine, all produced on the monastery grounds. 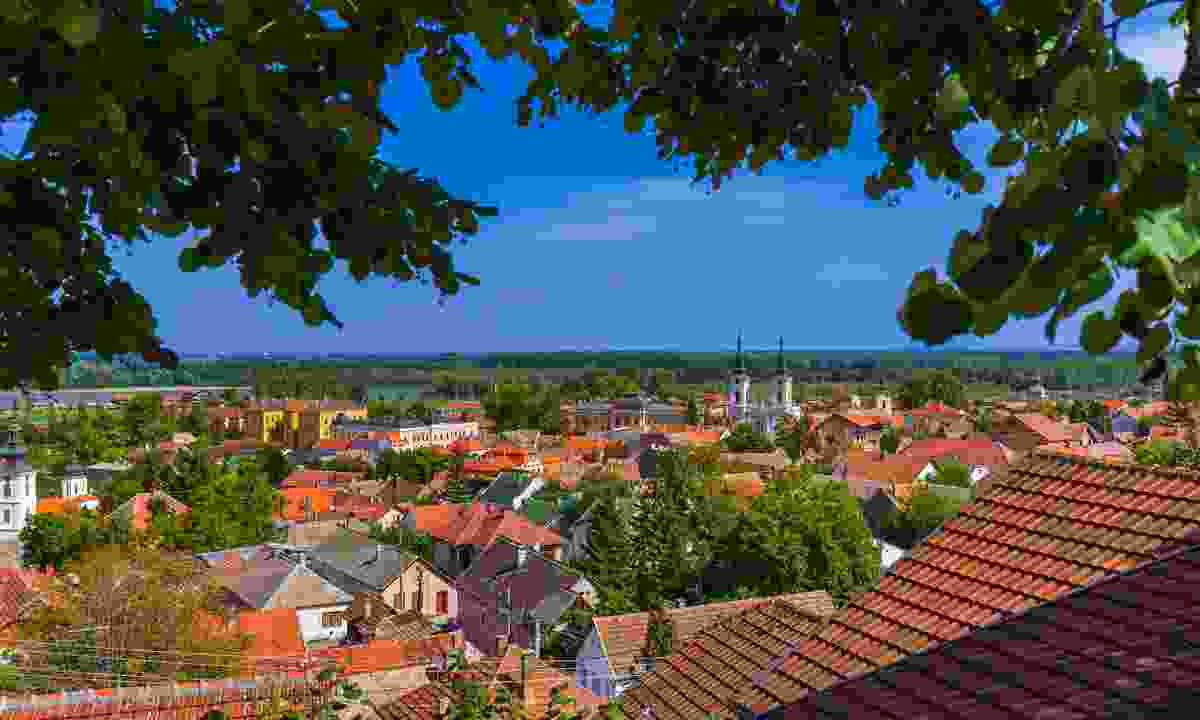 Set in hills and surrounded by vineyards, Sremski Karlovci is regarded as Serbia’s prettiest town. It was the seat of the Serbian Orthodox Church during the time of the Habsburg Empire and is famous for its beautifully preserved buildings, quaint squares and delightful fountains. Most of the town’s churches, halls and palaces survived the battles of 1848 in these parts unscathed.

Sremski Karlovci is popular with wine lovers too. An annual wine festival is held every September and local varieties can be sampled at cellars like Podrum Bajilo and the Zivanovic Wine Cellar, which also has a museum to bee-keeping. 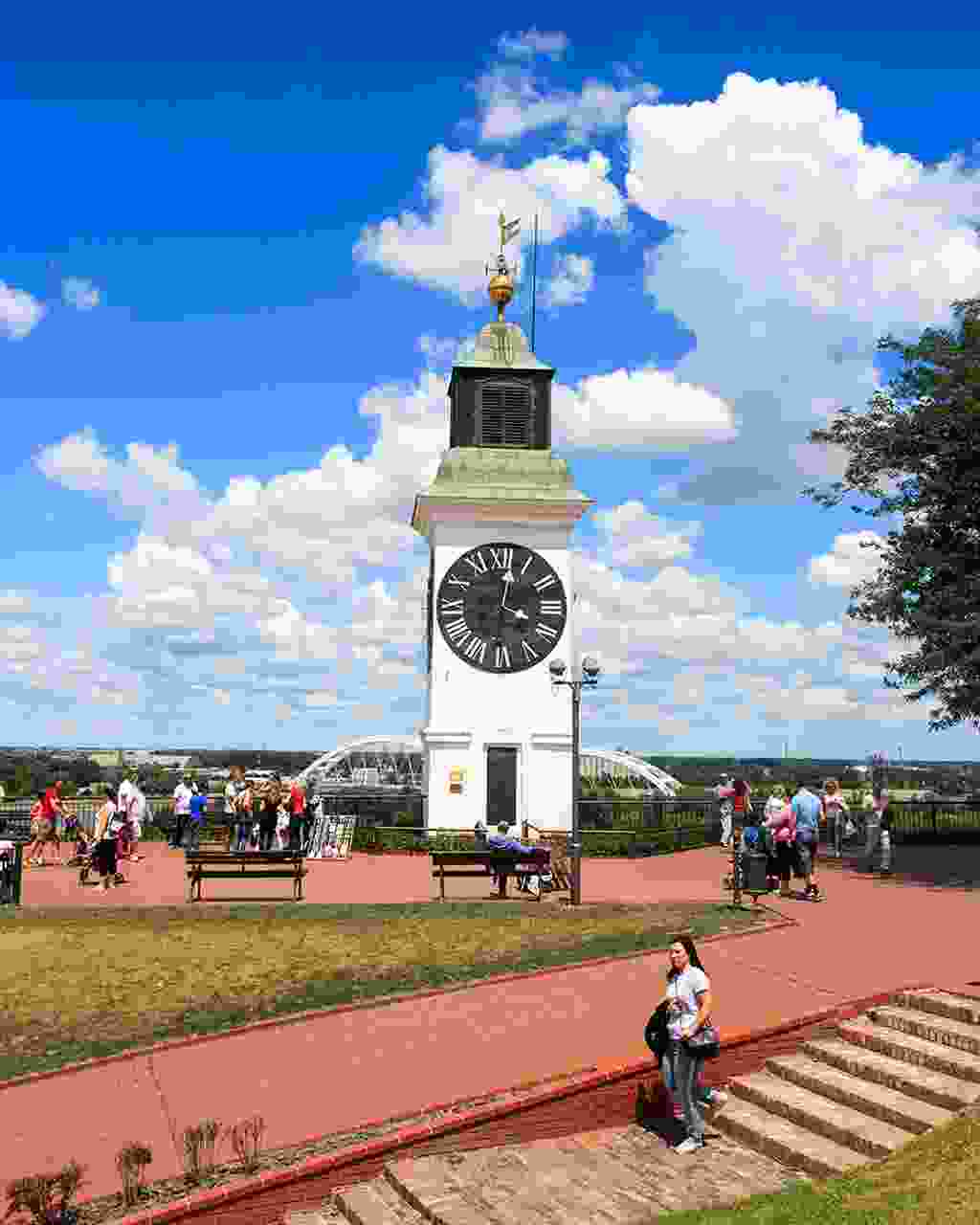 When to go: May to September is the best time to enjoy Novi Sad and the surrounding countryside. It’s warm, the cafés and bars are buzzing and there is a full calendar of cultural events. 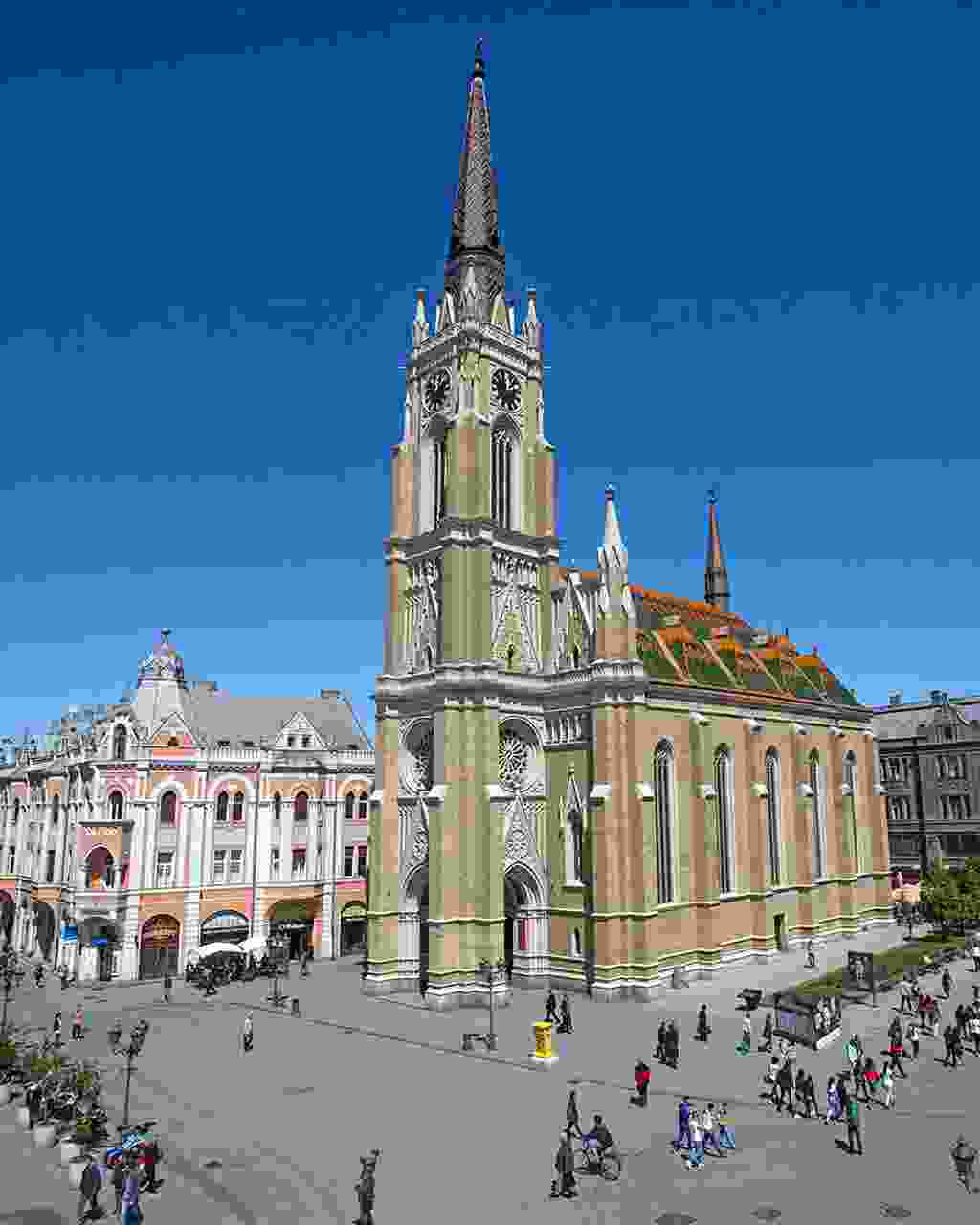 The Catholic Church of Mary (www.novisad.travel)

Weather: Novi Sad has four very distinct seasons. Winters are cold, with temperatures dropping below zero. Summers are can get hot and the warm weather lasts from May to September. Springs are short and wet. And Autumn is a mixed bag, tempered by the beautiful fall leaves on display along the river. 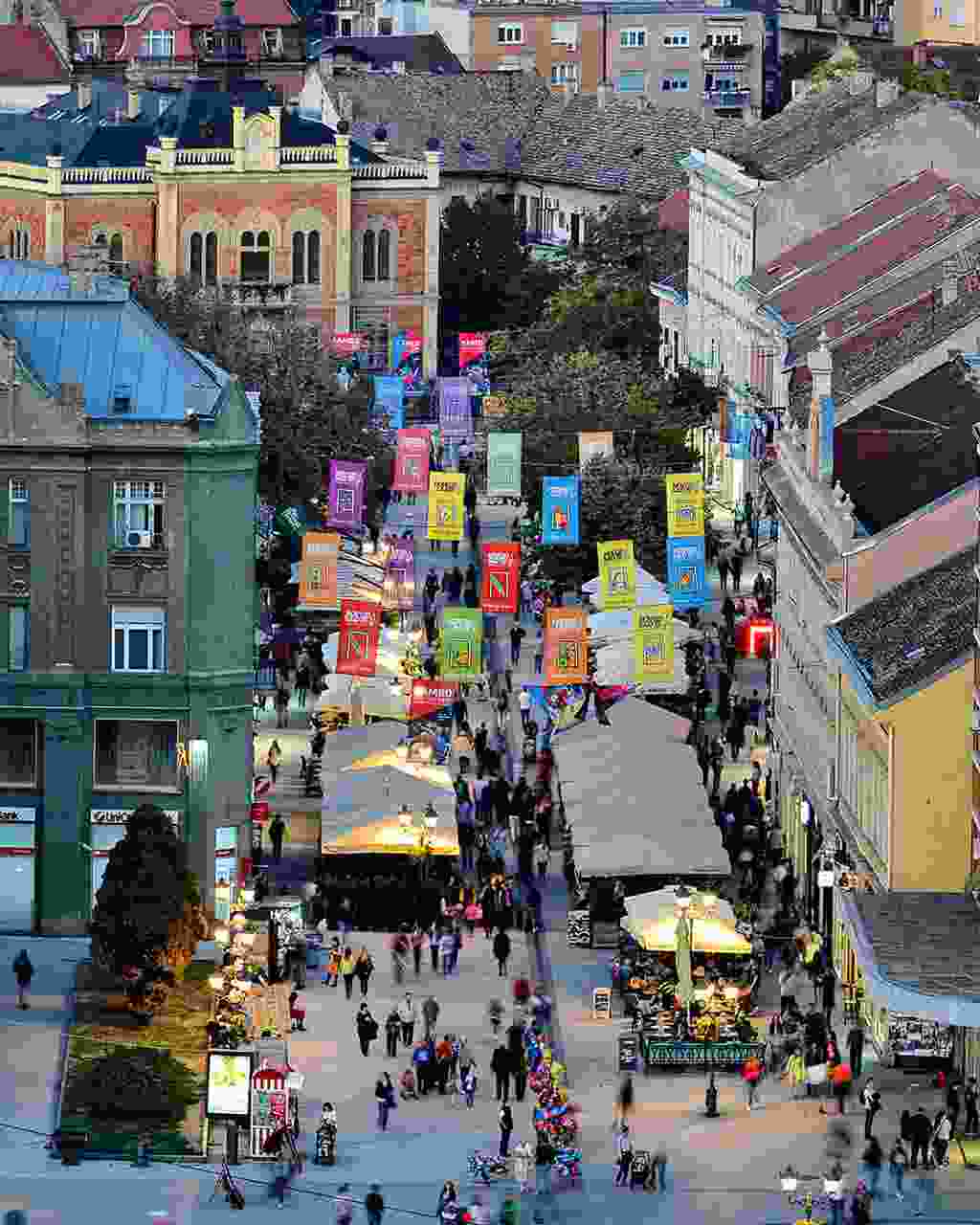 Getting there: Novi Sad doesn’t have its own airport. The nearest one is Belgrade’s Nikola Tesla International airport, 70 kilometres away. Taxi companies run regular car services between the airport and the city, alongside regular buses. Novi Sad is also on the main train line between Belgrade and Budapest in Hungary.

Find out more about Novi Sad and Serbia.