3 great ways to connect with the local culture in Nicaragua

Where to travel in Nicaragua to find fun festivals, fabulous food and fascinating history…

To really get under the skin of a destination, you need to go local. Traditional culture, authentic food and vibrant festivities are an intrinsic part of any adventurous trip and Nicaragua can offer this in abundance thanks to its celebration of locals and heritage.

With a unique blend of people, traditions and history, Nicaragua’s population is a diverse patchwork of multi-ethnic and multilingual communities. Each one is welcoming and captivating in equal measure, eager to demonstrate their customs, cuisine and warm hospitality. Here’s three great ways you can immerse yourself in Nicaraguan culture…

1. Celebrate with the locals May Pole festival in Nicaragua (Nicaragua Tourism Board)

From the Pacific Coast in the west to the Caribbean Coast in the east, Nicaragua is a mosaic of different cultures. The western region of the country was colonised by the Spanish from the early 16thcentury, who set about conquering the native tribes of the region and founding colonial cities such as Granada and León, before introducing the Spanish language and Catholicism. Much of Nicaragua remained under Spanish rule for 300 years until independence was secured in 1821, but Nicaragua's traditional and native traits always found a way to resurface into mainstream culture.

One of the biggest influences to remain in the fabric of Nicaragua is the El Güegüense play, one of the most important literary works in the country’s history.

Written in the indigenous language of Nahuatl, El Güegüense is a satirical drama that depicts the resistance against colonial rule. It’s one of the few pieces of indigenous literature to emerge from the colonial era, something made even more remarkable when you learn that it’s rumoured to often have been performed on the streets right in front of Spanish military officers. Its survival relied on being passed down orally for generations before finally being written down in a book in 1942 and has been officially recognised and inscribed on the list of ‘Intangible Cultural Heritage of Humanity’ by UNESCO.

You can still marvel at the spectacle to this day; each January sees hundreds of people of all ages take to the streets of Diriamba for the feast of San Sebastián, the city’s patron saint, in a dazzling display of choregraphed dance, colourful 'Toro Huaco' costumes and traditional music. It is also performed as a play in the Ruben Dario Theatre in Managua all year around. 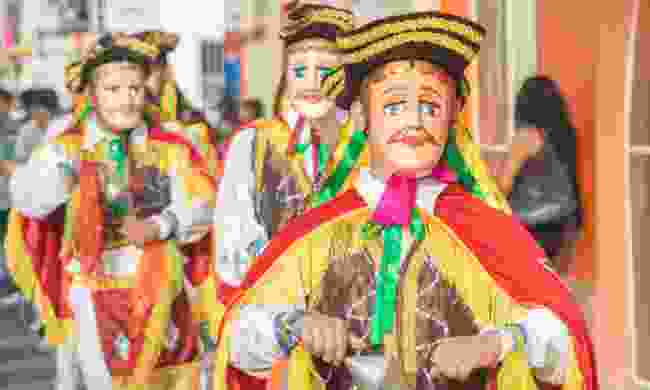 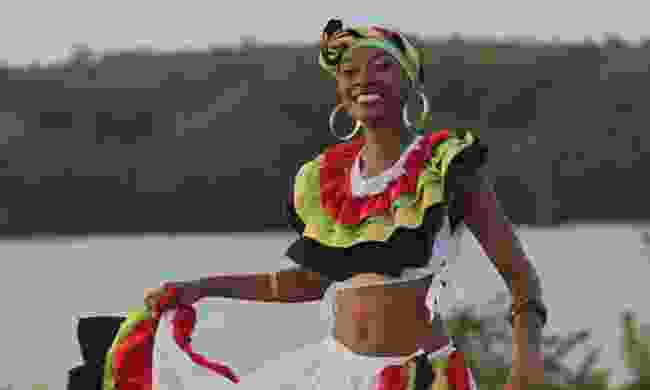 Unlike the rest of Nicaragua, the Caribbean Coast resisted colonisation by the Spanish, with the swathes of dense rainforest acting as a geographical barrier. The British however landed via the Caribbean, establishing it as a protectorate and bringing West Indian and African slaves to the region. The British Protectorate was dissolved in 1894 but the Caribbean Coast has remained either autonomous or semi-autonomous ever since, allowing for an English-speaking Creole and Afro-Caribbean community to blossom.

Today, this part of Nicaragua has become famous for its festivals and revelry. The most significant is the Palo de Mayo Festival in Bluefields, which fuses reggae beats, dancing and food together with the British tradition of maypole dancing.

If you want an insight into the small Garifuna community (descendants of West African and Caribbean Indian migrants) their annual festival is held in November in Bluefields and at Pearl Lagoon. The Garifuna language, dances and culture are a part of UNESCO's list of Intangible Cultural Heritage.

2. Connect with its history 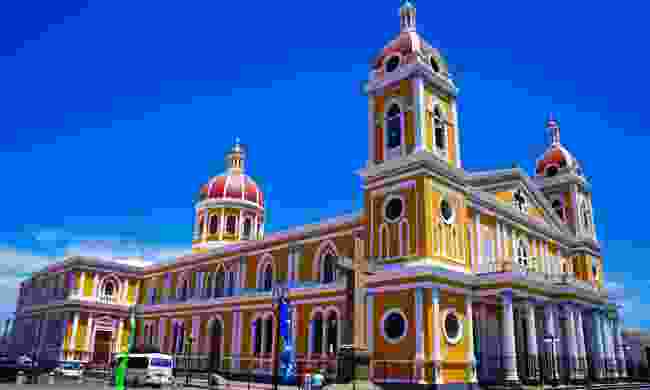 Our Lady of the Assumption Cathedral, Granada (Shutterstock)

The Spanish may have been overthrown in Nicaragua nearly 200 years ago, but they left behind a string of colourful colonial cities, which have become landmarks for visitors to explore. None more so than Granada, the oldest Spanish-built city in Central America when it was founded in 1524 and possibly the most photogenic. Today, its colonial streets are a joy to stroll, with many of the pastel-hued buildings impressively restored. The city’s crowning glory is its ochre-washed cathedral, whose peach-coloured bell tower offers panoramic city views. 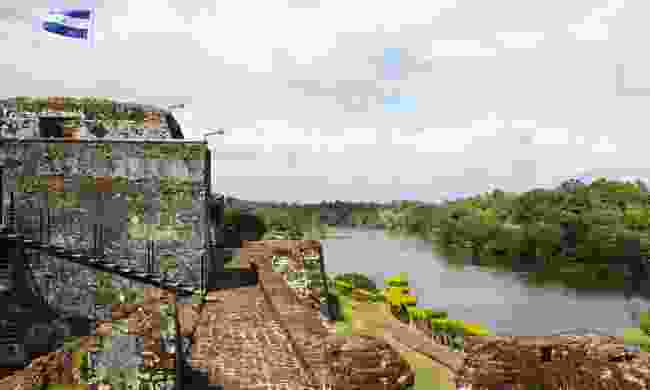 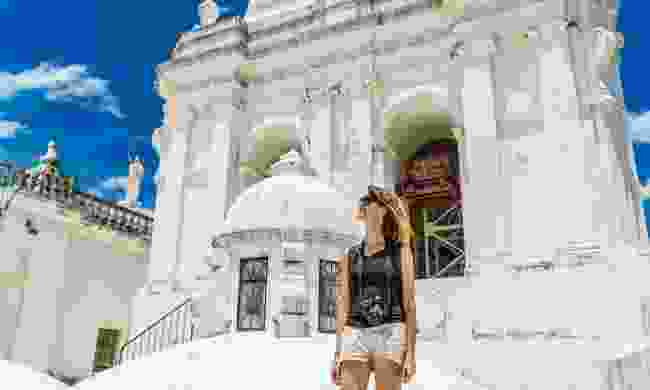 Exploring the rooftop of the cathedral of Leon (Shutterstock)

A visit to León offers a pretty mix of colourful churches, murals and a baroque cathedral, which is the largest in Central America. This is in fact the second version of León, with the original city swallowed up by the volcanic eruptions of Momotombo and its excavated ruins - known as León Viejo - are well worth a wander.

The Spanish’s architectural legacy stretches far beyond just city walls and La Fortaleza in El Castillo, on the banks of the Rio San Juan, makes for an intriguing stopping point; a moss-covered stone fortress that was built to stop pirates surging upriver to attack prosperous Granada.

Managua was built geographically in-between León and Granada as a compromise to become Nicaragua’s capital in 1852. Located on the shores of the Xolotlan (or Lake Managua, the second largest lake in Nicaragua) it means that a trip to Managua can have you enjoying the water on a ferry ride, the breeze of its boardwalk (peppered with an array of seafood and traditional restaurants) and music at the Salvador Allende Port.

As you explore be sure to admire the architectural finesse of the Ruben Dario Theatre and find the 18m-high statue of Augusto Sandino; the country's national hero who rebelled against the US military occupation in the early 20th century. If you want to further pay tribute to Sandino, his hometown of Niquinohomo has a museum dedicated to him and there's Coyotepe Fortress too, which witnessed one of the bloodiest battles during the resistance against the US.

3. Tuck into its local cuisine Nicaragua’s unique blend of history and geographical location has meant it boasts a cuisine that’s stuffed with both taste and heritage. Ingredients have been drawn from all kinds of backgrounds, with the Mesoamerican influences of the Aztecs and the Maya to the north bringing corn and the Incas in the south adding the likes of beans and potatoes. The eastern coast has been inspired by the flavours of the Caribbean and incorporation of coconut into cooking whilst, since the arrival of the Spanish, their cowboy culture and cattle ranching has now led to Nicaragua becoming the largest beef- and dairy-producing country in Central America.

This infusion of gastronomic influences has created a delicious range of dishes you should try, including the national food, gallo pinto (rice and beans), and vigoron (yucca with pork crackling with a pickled cabbage salad). Nicaragua’s version of tamales, called nacatamales (corn dough stuffed with meat, potatoes and vegetables) isn’t just a tasty snack to tuck into but thanks to its mix of flavours is also a gastronomic example of the country’s myriad influences across the centuries, all cooked together.

As you journey, be sure to also sample some of Nicaragua’s other gastronomic treats.

Due to its distinctive flavour, Nicaraguan cocoa has been growing as an industry and in popularity amongst artisan chocolate makers the world over. You too can indulge your sweet tooth at the ChocoMuseo in Granada, preparing the cocoa beans and creating your own organic bars at a chocolate workshop.

For something with a bit more ‘kick to it’ make for the Flor de Caña distillery near Chinandega, which offers visitors daily tours around its 125-year-old distillery and a chance to sample its award-winning premium rum.

Or, why not indulge in nature’s bounty, by purchasing some freshly grown fruit from a local street vendor – you may be familiar with some of the exotic options available such as pineapples, mangoes and bananas but have you ever tried a sapote, a pitaya (dragon fruit) or a star apple? Here’s your chance. Discover all this and what else Nicaragua has to offer at visitnicaragua.us