With diverse walks, ebony sand beaches, wildlife-rich forests and an even richer culture, there's every reason to visit Montserrat in the Caribbean...

At just over 17km long and 11km wide, Montserrat offers an uncrowded slice of laid-back Caribbean island life. The Soufrière Hills Volcano is the main attraction, and a humbling reminder of nature’s brute force following a series of volcanic eruptions in the 1990s. But the island’s other draws – including black sand beaches, thriving coral reefs, and rainforest-covered hills – provide plenty of adventures for nature lovers looking to relax and rejuvenate...

Montserrat’s north was left unscathed by the volcanic eruptions, retaining its natural beauty. This can be explored on several verdant hiking trails that meander through the Centre Hills, the island’s largest remaining forest area. The two kilometre Oriole Walkway Trail, for example, weaves through thick foliage to the top of the over 400m-high Lawyer's Mountain with its sweeping views of the Silver Hills and Caribbean Sea. Keep your eyes peeled for the national bird, the Montserrat oriole after which the trail is named.

Another revealing yet gentle hike is the Cot Trail. This two-and-a-half kilometre walk starts near the Montserrat National Trust and takes you past farmland, fruit trees and ferns. Near the end of the hike, be sure to stop at the Runaway Ghaut to drink the water. Montserrat's famous ghauts (pronounced ‘guts’) are steep ravines that carry rainwater from the hills down to the sea, and legend has it that those who drink from the Runaway Ghaut will return to Montserrat again one day. Over in the north-west of the island, hikers can combine nature with culture in Soldier Ghaut where petroglyphs engraved on a volcanic rock can be explored. They were only discovered in 2016 and are thought to have been carved by Amerindians some 1,000 to 1,500 years ago. 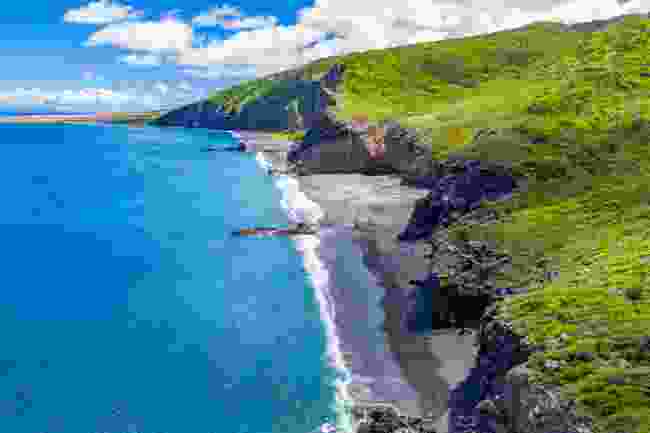 Due to its explosive geology, most of Montserrat’s beaches are powdered by black and grey volcanic sands – a striking contrast to the deep blue ocean and a novelty for many visitors to the Caribbean. Framed by a pair of rugged cliffs and fringed with palm trees, Little Bay beach is the island’s most popular for swimming, stand-up paddle-boarding and kayaking. Be sure to try the fresh seafood at one of its beach bars.

Tucked in a cove under a forested cliff, Rendezvous Bay is Montserrat’s only white-sand beach and can be reached in less than an hour by foot from Little Bay. You can also boat or kayak to the beach from Little Bay. Once there, enjoy a secluded picnic on the powdery sands. Offshore, coral reefs thrive and snorkellers and divers alike can enjoy fine visibility and an abundance of underwater life including sponges, heads of brain coral, kaleidoscopic tropical fish, spotted eagle rays, spiny lobsters and even nurse sharks. 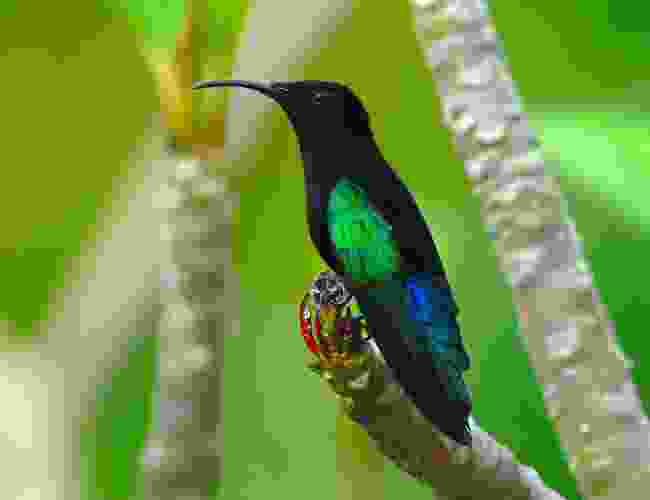 Montserrat has an exceptionally rich birdlife and most of the over 100 species on the island can be seen in the lush Centre Hills. While on the forest trails, keep an eye and ear out for birds such as the Antillean crested hummingbird, forest thrush, bridled quail- dove, purple-throated carib, pearly-eyed thrasher and the endemic Montserrat oriole. The undergrowth is home to a Jurassic array of reptiles and mammals such as agoutis, lizards, geckos, iguanas and the confusingly-named mountain chicken, which is in fact one of the largest frogs in the world and is endemic to the islands of Montserrat and Dominica.

Elsewhere on the island, at Rendezvous Bay a colony of thousands of Antillean fruit-eating bats roost above the eerily-lit waters of their seafront twin caves. One cave houses the males while the other is home to the females and their young. Paddle past on a kayak from Little Bay, or for an extra thrill, join a guide to swim into the caves.

Leatherback, green and hawksbill turtles all nest on many beaches in Montserrat. See them at Woodlands Bay, when at night from April to September, the females deposit their eggs in the black sand, and later in the season the tiny hatchlings emerge and scurry to the sea.

4. Take in the views 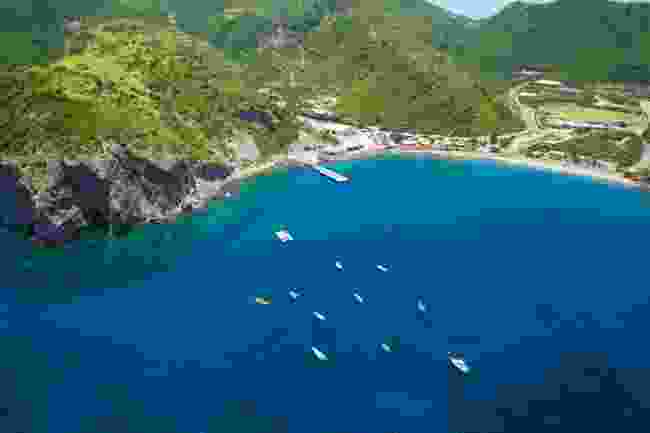 The Soufrière Hills Volcano and its immediate ash-smothered surroundings lie in a largely off-limits exclusion zone comprising more than half of southern Montserrat, but several hill-top vantage points provide sobering yet extraordinary views of the devastated areas. The Montserrat Volcano Observatory in the village of Flemmings was established after the first phreatic eruption on 18 July 1995, and is still staffed today by scientists monitoring volcanic activity. It gives an overview of how the eruptions impacted life on the island, and visitors can watch a 20 minute film that shows footage before, during and after the eruption.

From the observation platform, look out at the exclusion zone, the abandoned former capital of Plymouth, and the cloud-capped volcano looming beyond. The viewpoint on Garibaldi Hill on the west coast also takes in the haunting ruins of Plymouth as well as the Belham Valley filled with ash and rock. Jack Boy Hill on the island’s eastern side overlooks the old airport and villages covered by pyroclastic flows. From here, get a last look at the dome of Soufrière Hills for some final reflections on how the volcano has shaped so much of this island’s geology and history.

For more inspiration and information on travel to Montserrat, head over to the official website.