From the eclectic city of New Orleans to the wildlife-filled swampland, Louisana offers adventures for every kind of traveller. Discover some of the best with our full travel guide...

How to get to Louisiana and around 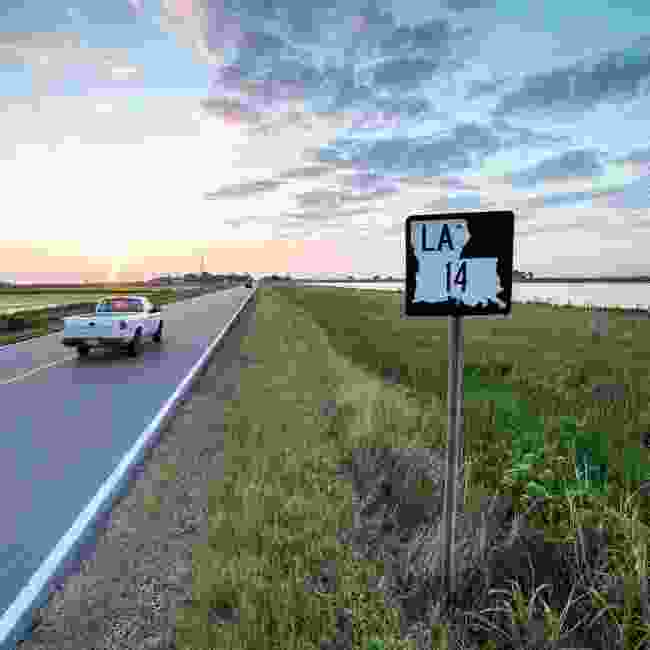 Getting around Louisiana (Louisiana Office of Tourism)

Flights from all over north America serve Louisiana’s one major airport in New Orleans. British Airways fly non-stop from London in under ten hours; otherwise, transatlantic passengers change planes in cities such as New York, Houston and Chicago.

Cross-country Amtrak trains connect New Orleans with Los Angeles, Chicago and New York, and the East-West line from New Orleans to Lake Charles via New Iberia and Lafayette allows you to travel across Louisiana itself. Greyhound buses serve the main towns.

Renting a car is the easiest way to get around the state and the best way to see the rural areas is to rent a car and enjoy one of their many byways. Bikes too are widely available for rent and great for exploring New Orleans and other towns, or forays along the backroads of Cajun country. Louisiana is simply too large, though – Shreveport for example is 500km from New Orleans – to tour the whole state by bike.

If you only do three things in Louisiana 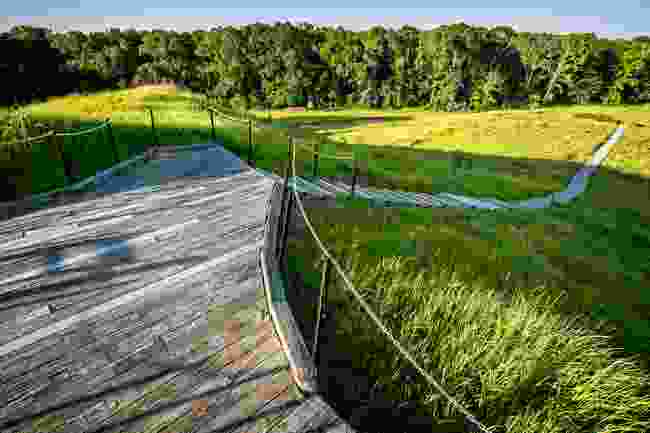 The remarkable ancient settlement of Poverty Point lies hidden in remote, rural northeast Louisiana. Between 1700 and 1000 BCE, several thousand Native Americans lived atop its six concentric earthen ridges. Only after seeing aerial photos did archaeologists realise this vast amphitheatre, now a UNESCO World Heritage Site, was human-made. These days it stands 20km west of the Mississippi, at the edge of the flood plain, but during its heyday the river flowed much closer by. Though agriculture was then barely established, goods and artefacts were traded as far afield as the Great Lakes.

A four kilometre hiking trail meanders through the grassy site with a boardwalk climbing the largest of several artificial mounds. Arguably shaped like a massive bird, the mysterious Mound A was the largest construction project in North America before the time of Christ. Tours, some by tram, set off from the visitor centre which displays tantalising discoveries. 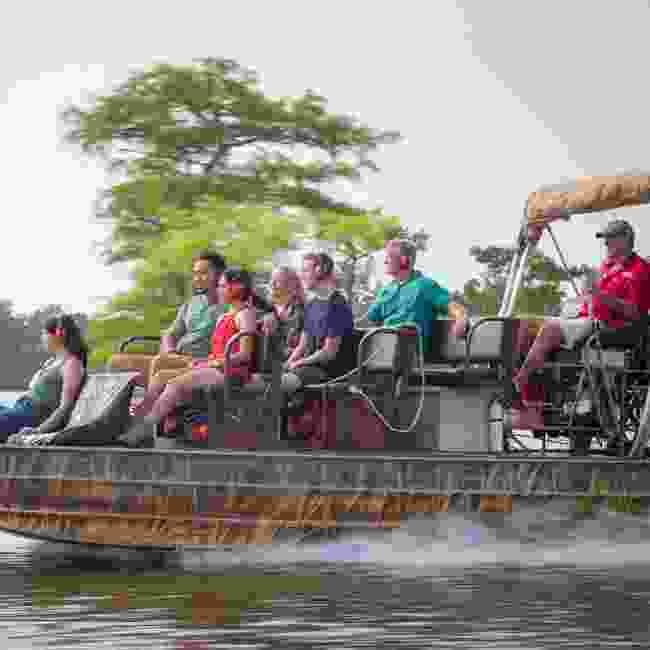 Go on an airboat swamp tour (Louisiana Office of Tourism)

2. Go on an airboat swamp tour

The muddy waters of the Atchafalaya River which winds through south-central Louisiana is reminiscent of a ribbon of melted chocolate. A semi-submerged labyrinth of lakes, swamps and bayous, the Atchafalaya Basin averages around 25km wide and harbours an amazing array of birds, reptiles, mammals and fish. Though protected as a National Heritage Area, it’s very much a living cultural environment and local guides eagerly share Cajun lore and traditions along with their wildlife expertise on exhilarating swamp tours.

Powered by thunderous propellers, the nimble airboats thread their way through this eerie, baffling waterscape, where wide open stretches of river are interspersed with expanses of thick swampland, and clusters of cypress and tupelo trees poke from the depths. Nothing beats the thrill of spotting your first log-like alligator, lasciviously eyeing an innocent nutria (coypu) perched on a cypress knee, or a snake coiled on the porch of a fishing shack. 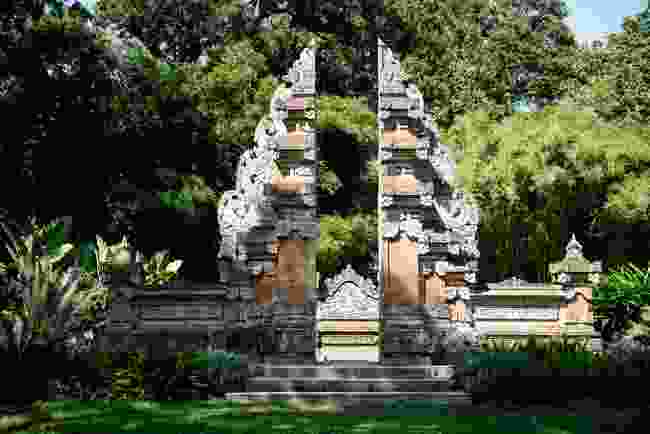 Louisiana’s gardens offer irresistibly soothing escapes for road-weary travellers. The sheer lush greenery surrounding Houmas House, on the River Road northwest of New Orleans, has to be seen to be believed. Set amid live oaks beside the Mississippi, the gardens of this former sugar plantation rejoice in semi-tropical humidity. Local species are to the fore while lily and lotus ponds make cool refuges.

To enjoy over 20,000 rosebushes laid out in 65 separate gardens, head to the Gardens of the American Rose Center just outside Shreveport. With new hybrids developed alongside traditional favourites, over 100 varieties – some at their most spectacular between mid-April and mid-May, others in September and October – are on show.

Also in northern Louisiana, beside the Ouachita River in Monroe, the Biedenharn Museum and Gardens centres on a formal, English-style walled garden. Colourful flowers bloom around immaculate lawns with themed sections including Four Seasons and Oriental gardens.

Over at Jefferson Island, Rip Van Winkle Gardens delights with its tropical vegetation that surrounds the Joseph Jefferson House, where the actor who portrayed Rip Van Winkle formerly lived. Embark on a guided tour of Rip's Rookery or for a longer experience, stay in one of the Acadian cottages where you can watch the sun set over Lake Peigneur. Don't miss the hand-carved Balinese Gateway that was brought to the garden in 2008.

Three ways to get outdoors in Louisiana 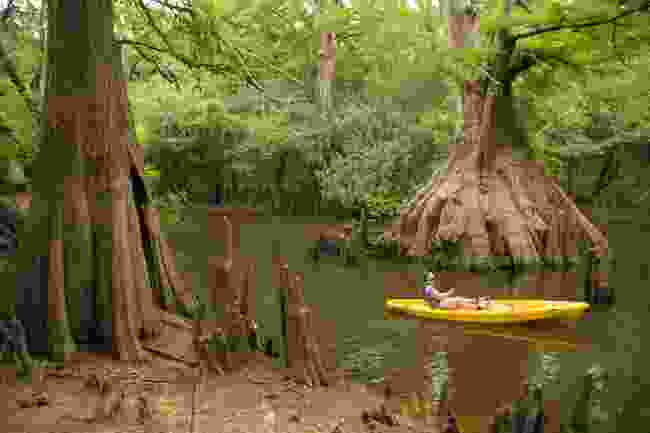 Bayous and waterways all over Louisiana offer superb kayaking whatever your skill or experience. Some of the finest trails lie along Bayou Bartholomew, up north below Arkansas. The longest free-flowing stream on the lower Mississippi, at 584km, the bayou is a wildlife haven where you can paddle through forests of giant bald cypress, some of which are over 1,000 years old. Further south, Lake Martin outside Breaux Bridge makes for an exciting introduction to the swamps of Cajun country, before you graduate to state parks such as Tickfaw near Lake Pontchartrain and Cypremort Point at the southern end of the Atchafalaya Basin.

Kayakers and canoers can combine saltwater paddling with fishing for bass and trout on the inshore trails around Venice, down at the mouth of the Mississippi.  Those looking for an extra thrill should head to the far west of the state to ride the whitewater rapids on the Sabine River below the dam at the southern end of Toledo Bend State Park. 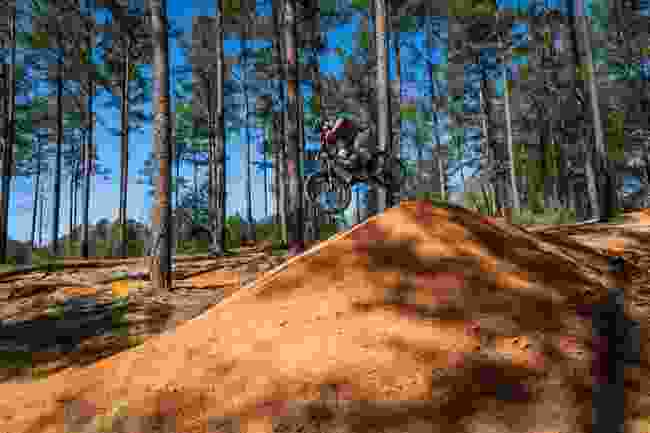 Whether you’re looking to explore its cities, tour its scenic swampscapes, or test your technique on dedicated mountain-biking trails, Louisiana is catnip for cyclists.

Among in-town tracks are the panoramic 6.8km trail atop the Mississippi levee in Baton Rouge and the lush avenue ride from the French Quarter to the Garden District in New Orleans. A more ambitious 120k loop follows both banks of the Mississippi between Plaquemine and Donaldsonville, passing plantations such as Houmas House along the Great River Road.

Exhilarating circuits through the wetlands and forests of Cajun country include those between Lafayette and Breaux Bridge, or between New Iberia and Avery Island, home of Tabasco sauce.

Off-road enthusiasts will find stimulating trails in state parks such as Chicot and Lake Claiborne, while Lincoln Parish Park up north boasts a gloriously convoluted trail over steep muddy ridges. After a longer route? Head to Kisatchie National Forest which is criss-crossed with shaded trails. Bogue Chitto State Park also offers a 22km track which will have you bumping over red soil mounds and weaving between the trees. 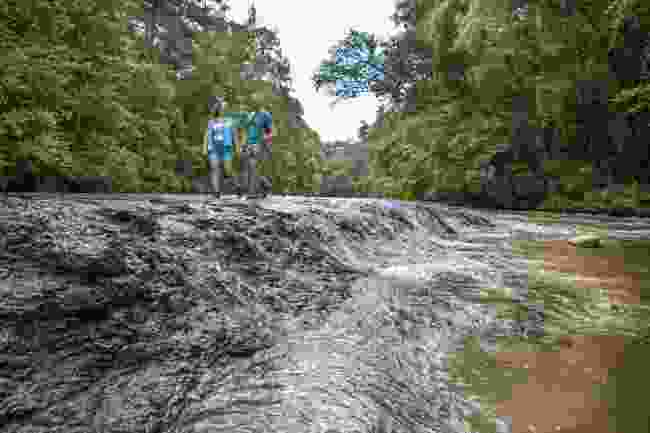 Parks and preserves all over Louisiana give hikers the chance to penetrate wildlife-rich wildernesses that range from mysterious bayous and cypress swamps to hardwood forests and windswept Gulf shorelines.

Up north, trails through Kisatchie National Forest cross wooded hills to reveal horizon-breaking views, tranquil lakes and streams fringed by wildflower-strewn meadows. East of the Mississippi, pine trees overlook a beach-lined river at Bogue Chitto State Park while down in Cajun country in places such as Jean Lafitte NHP and Tickfaw State Park you can venture out in search of alligators on boardwalks perched directly above the swamps and bayous. Further south still, at Grand Isle State Park near the mouth of the Mississippi, a 21km hike leads along the wild and dramatic shoreline of a barrier island, a haven for migrating birds.

Three road trips to put you in the heart of adventure 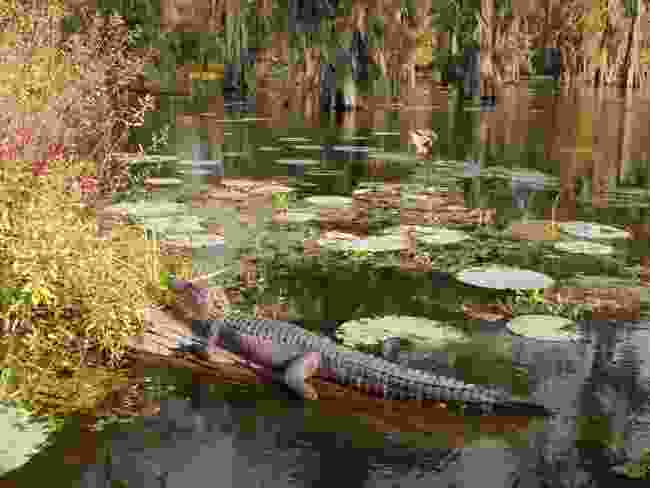 Discover the seductive charms of Cajun country as you meander for 300km beside the Bayou Teche from Morgan City southwest of New Orleans to Arnaudville near Lafayette.

Heading upstream from the bayou’s confluence with the Atchafalaya River, historic Franklin charms with its white lampost-lined streets and grand 19th-century houses. Next, continue to little Charenton which is home to the Chitimacha Native American reservation to explore the museum that recounts their heritage. For lunch, go to LeJeune’s Bakery in Jeanerette to treat yourself to fresh French bread still warm from the oven and baked to a 1884 recipe.

In New Iberia, the entire downtown is on the National Historic Register and it's easy to see why. Ancient moss-draped oak trees stand like guards around the stately homes while pastel-hued houses line the streets like a real-life timeline. The moody Shadows-on-the-Teche mansion seemingly palpitates with history and a tour around it reveals the tragic stories of its slavery and sugar plantation past.

After detouring to the Tabasco hot-sauce factory on verdant Avery Island, follow the bayou to St Martinville, where the magnificent Evangeline Oak commemorates Longfellow’s saga of lost Cajun love. Ravishing Breaux Bridge, also known as the 'Crawfish Capital of the World', is renowned for its cafes and restaurants, and makes a great base for swamp tours. 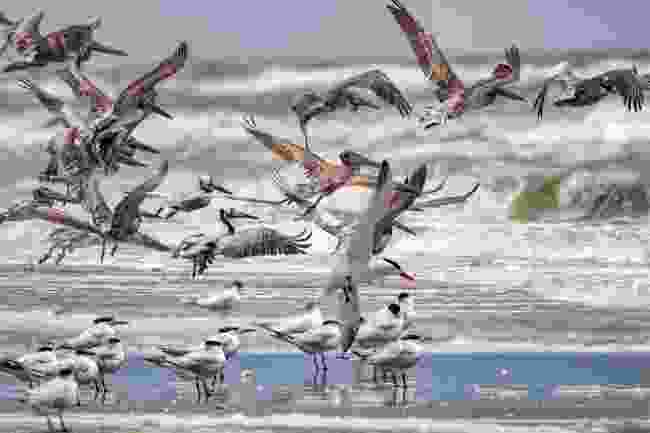 The Creole Nature Trail lures travellers in with its 330km network of itineraries through the wetlands of southwest Louisiana. Starting from Sulphur, 135km west of Lafayette, and taking in four wildlife refuges and 40km of beach, it’s home to 15,000 alligators, as well as birds from great blue heron to hummingbirds.

Driving south from Sulphur to Hackberry, the landscape transitions from prairie to marsh. Once across the Intracoastal Waterway which stretches right up to New Jersey, crab stands and fishing shacks dot the highway while trails in Sabine National Wildlife Refuge offer sightings of wintering waterfowl and alligators.

Hitting the seashore at Holly Beach, head west towards the Peveto Woods Sanctuary, or east to Cameron, where a flatboat ferry carries cars across a busy shipping channel. From wild Rutherford Beach, 25km beyond, turn inland to reach Lake Charles, stopping off in season at the roseate spoonbill rookery in Lacassine National Wildlife Refuge.

Now technically a lake having become detached from the Red River over the years, the Cane River was once lined with prosperous plantations. The Cane River National Heritage Trail, winding 114km southeast to Cloutierville, is a romantic rural drive fringed by superb oak, myrtle and magnolia. Stop off at  Cane River Creole NHP along the way to explore both the Oakland and Magnolia cotton plantations. At both sites you can tour the homes and outbuildings to learn about the lives of the enslaved African American and original French Creole owners. The trail also passes Melrose Plantation where renowned African-American folk artist Clementine Hunter worked as a cook in the 1940s. 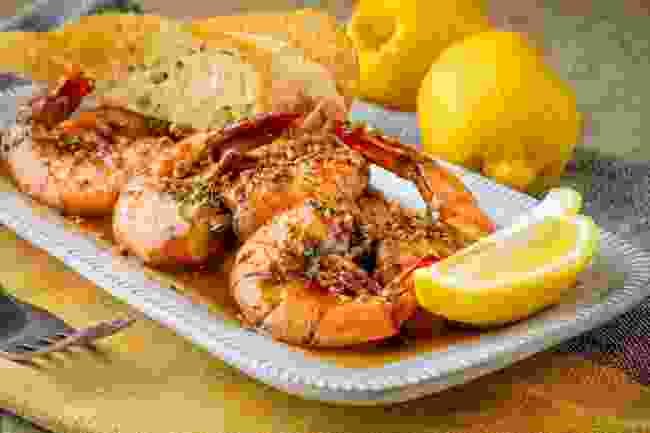 This restaurant in New Orleans dates back over 160 years and offers a taste of tradition with its modern take on ancient recipes.

Visit this famous restaurant in the French Quarter to feast on Creole and Cajun cuisine, walk through the Charm Gates, make a wish in the Devil’s Wishing Well and hear the story of sisters Emma and Bertha that give the restaurant its name.

Intertwining classic New Orleans and French cafe traditions, this eatery on Royal Street knows a thing or two about the perfect coffee and doughnut pairings. 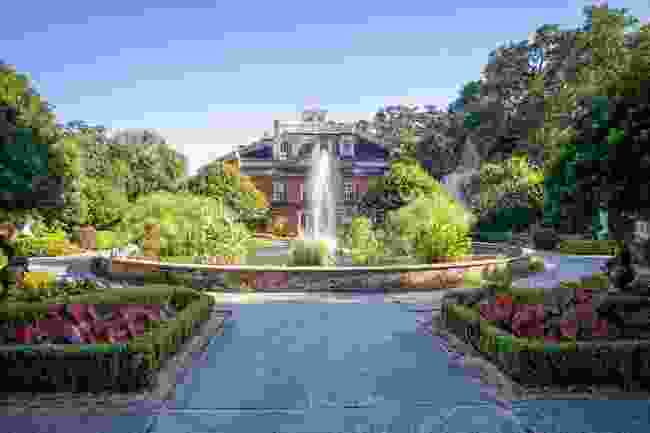 1. At a historic home

For an overnight stay on the Great River Road, head to Houmas House, a historic home facing the mighty Mississippi. Guest cottages are arrayed along an oak alley in its semi-tropical gardens.

2. A B&B in Natchitoches

3. A Boutique hotel in New Orleans

For more inspiration and information on Louisiana travel, head over to the official Louisiana website.