Dubrovnik may get the crowds, but not far away there’s a medieval walled city in Montenegro that's just as charming and atmospheric, with a bayside setting that will take your breath away... Tucked away in the far corner of a spectacular bay, backed by epic mountains and protected by stone walls built by the Venetians, the tiny Montenegrin city of Kotor is a Balkan gem. Seemingly untouched by time, each cobbled alley leads to a tiny chapel, an empty square or a grand palace, centuries old.

There is history at every turn – from the Cathedral of Saint Tryphon built in 1166 to beautiful Baroque palaces, stately reminders of the Hapsburg rule. All packed within squat city walls, a legacy of the city’s time as an important Venetian port.

Kotor’s charms spill beyond its medieval walls. A path behind the city climbs up the mountain, offering spectacular views across the city and the bay. Another path follows the bay, revealing pebbly beaches, seaside bars and outdoor restaurants offering the freshest seafood and uninterrupted views across the bay.

The Bay of Kotor itself is well worth exploring too. Bokor, as the locals call it, is dotted with tiny settlements, many as old as Kotor itself. At Risan, you’ll find Roman mosaics, just off the side of the road. Perast is another picturesque settlement, as old as Kotor, and the setting off point for the indescribably beautiful island church of Our Lady of the Rocks.

In short, Kotor is perfect – either as a base to explore this part of Montenegro or simply as a spectacular destination in itself.

Kotor is one of the oldest cities in Montenegro and sits tucked away in southeast corner of the vast Bay of Kotor. Located at the base of Mount Lovćen, it is only 60 kilometres south of Dubrovnik, as the crow flies, or 79 kilometres via a scenic windy road that follows the coast of the bay. “Surrounded by sheer walls of limestone and granite, the Bay of Kotor is often mistakenly described as a fjord. While it is easy to see a resemblance to its might cousins in Norway, the bay is actually a ria, a drowned river valley that remains open to the sea.”

Things you must do in Kotor

1. Wander through the walled city Wandering the narrow lanes of Kotor’s Old Town, is a delight. It’s easy to lose yourself among the UNESCO-listed city walls; each narrow alley packed with charming cafés where seating areas spill onto the streets. Every corner you turn reveals a glimpse of the town’s history: the Cathedral of Saint Tryphon, first built in 1166; the Church of Saint Luke from the 12th century; the Prince’s Palace from the 17th century and the Napoleon Theatre from the 19th century.

In the evening, when the crowds have thinned, it is like time has stood still – until the music from a nearby bar draws you in for a typically Montenegrin nightcap.

As befits a city with such a turbulent and eventful history, Kotor is home to some of the best museums in this part of Europe... Antiques in the old town (Dreamstime)

3. Sample the local food and wine

Spiced by the cultures that have ruled it and influenced by an abundance of local produce, the food of Kotor is fresh, flavoursome and unmistakably Mediterranean... 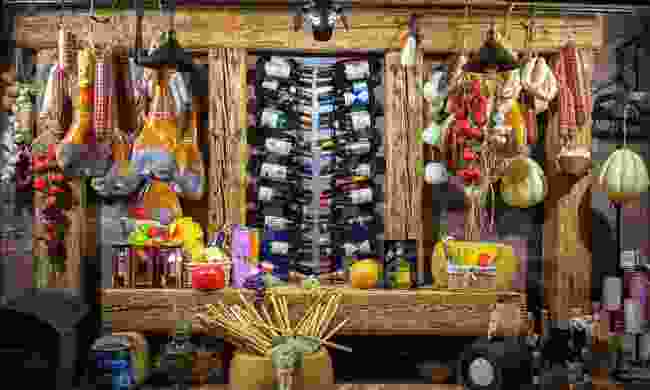 Where you eat is important. Many of the taverns in the old city are set in tiny squares, surrounded by beautiful buildings and often with live music. The pizzerias in the Square of Arms, in front of the cathedral, are surprisingly good value and a great place to people watch on a warm summer night. But for a real treat, head along the path following bay towards Dobrota and a clutch of restaurants offering outdoor dining, right beside the water. Eating your meal as the sun sets over the mountains that plunge into the sea, is one of Kotor’s simplest and most memorable experiences.

“In the local market, trestles groan under the weight of eggplants, asparagus, arugula, figs, nuts, tangerines and lemons. Down at the harbour, fishermen sell the bounty of the bay, fresh seafood that will become the culinary stars of local soups and broths or simply grilled and served as a seafood platter.” 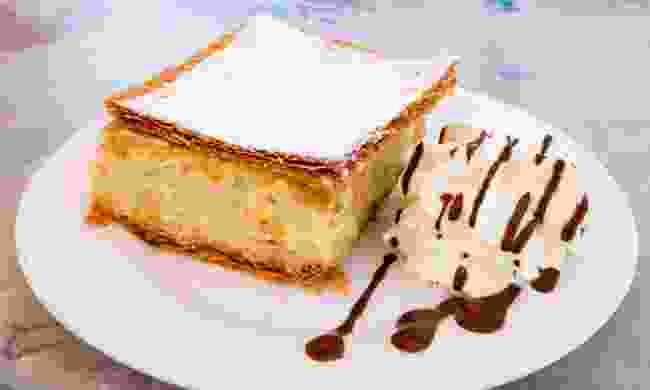 Krempita, a local custard-filled puff pastry that is created following a recipe that has been passed down from generation to generation. Available as a restaurant desert or to go, this indulgent treat is the taste of Kotor.

Kotor is immensely proud of its history and culture and celebrates it with a festive calendar, chock full of events, throughout the year. There’s an unmistakable focus on the arts, particularly with KotorArt, held every summer, is dedicated to preserving Montenegro’s traditional culture. Expect more than 200 performances of music, dance and theatre throughout the bay.

Towards the end of August, the city celebrates its maritime heritage with Boka Night, an ancient tradition that sees boat owners decorating their vessels for a naval parade and fireworks filling the skies.

The city also holds not one, but two, carnivals, one in the winter and another in the summer. The winter carnival, held in February, has been going since the beginning of the 16th Century, Both involve costume balls, musical and cultural events and a masked parade from one part of the city to the other, with revellers dropping in on bars, cafes and clubs along the way, serenaded by Blues, Jazz and Rock bands. 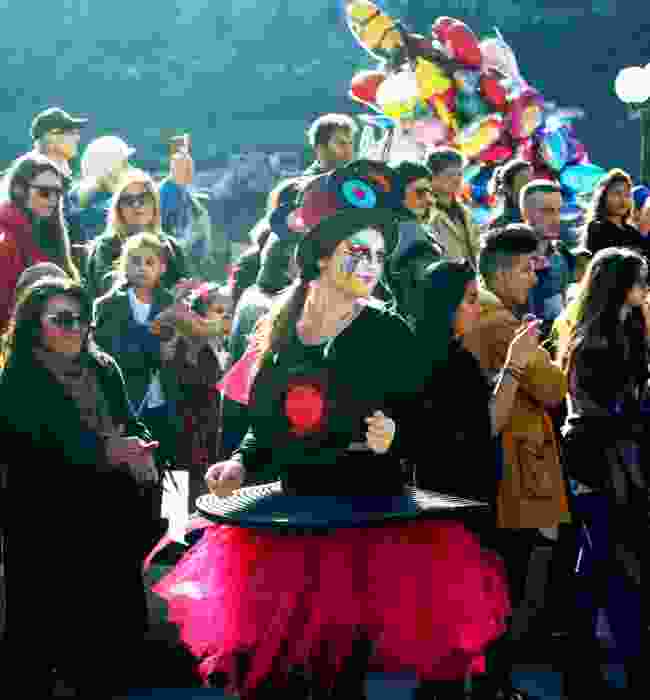 5. Climb the Ladder of Kotor 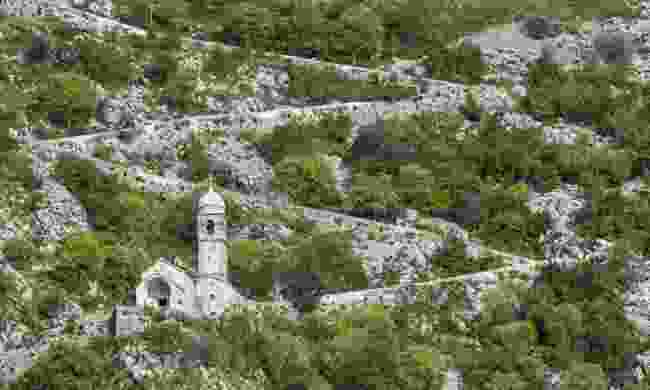 Behind the Old Town, you’ll find a hiking trail that zig-zags up the mountains. This so-called ‘Ladder of Kotor’ was once the only route connecting the town with Njegusi village and the old royal capital of Cetinje. From the 1200m-high Castle of San Giovanni, perched en route near the top of the range, views sweep across the bay, taking in the historic orange-roofed towns, the glassy ocean and the rolling mountains beyond.

“Kotor was nominated a world heritage site after the 1979 earthquake that devastated the city to encourage authorities to conserve and restore Kotor in keeping with its historical importance.” 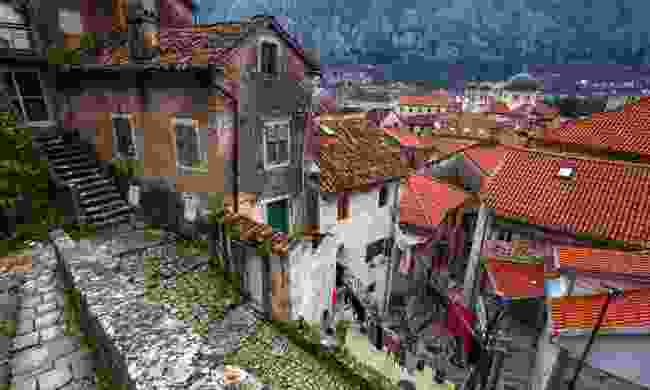 Day trips out of Kotor

1. Boat trips on the bay You can’t visit Kotor and not venture out onto the bay. It beckons you from every vantage point and even the shortest boat journey will reward you with spectacular views and new cultural delights.

Boat trips can be booked down at the harbour or through the tourist office near the main Sea Gate, just outside the city walls. The most popular tour is a 2 1/2 hour journey that takes you to both Our Lady of the Rocks, one of the beautiful island churches the bay is famous for, and the old town Perast. You can extend your trip by catching a later boat back from Perast, giving you time to take a dip at the local beach Pirat, or enjoy a meal in any of the seaside restaurants. The sandy beaches of Budva (Dreamstime)

Only 22 kilometres away and serviced by regular buses, Budva is a pretty town on the Adriatic Coast with ancient stone walls and a seaside citadel. It is famous for its sandy beaches and bussing nightlife and is known as Montenegro’s party town, by both visitors and locals alike. It is crowded and lively and popular with Russians. Staying in Kotor allows you to dip your feet in its hedonistic delights, before returning to the serenity of the bay. 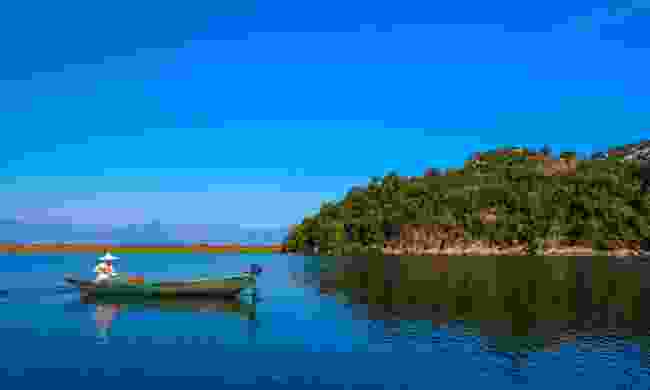 A fisherman on Lake Skadar (Dreamstime)

Another popular day trip from Kotor, albeit a more ambitious one, is a visit to the stunning Lake Skadar. At 400 sq km, it is the largest lake in the Balkans and a National Park since 1983. The park encompasses steep mountains, island monasteries and clear waters and is one of Europe’s top bird habitats. You can book a tour in Kotor or travel there independently, either by car or public transport. The colourful town of Cetinje (Dreamstime)

Just the other side of Mount Lovćen, Cetinje is the Old Royal Capital of Montenegro and the official residence of the President of Montenegro. It is a treasure trove of Montenegrin cultural and historical heritage, with many fine buildings and parks dating from the 18th and 19th century. It is a one hour drive from Kotor, along a winding mountain road that is regarded as one of the most spectacular – and hair-raising – drives in Europe.

Brad Pitt’s first lead role was in a movie called Dark Side of the Sun, shot on the Montenegrin Coast around Kotor in 1987. According to its Montenegrin director Bozidar-Bota Nikolic, Brad was particularly taken by the beauty of Perast. 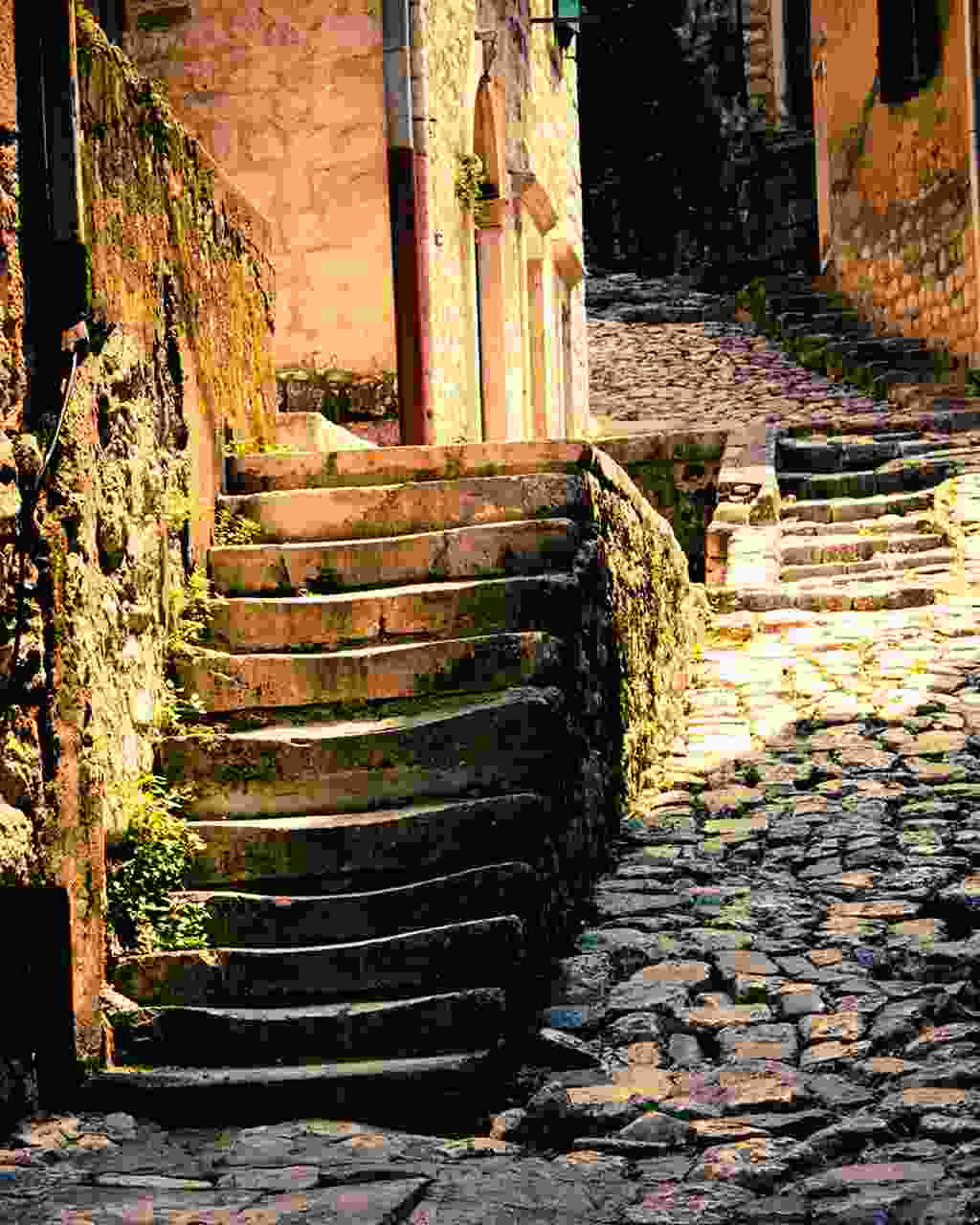 Getting there: Montenegro has two international airports at Podgorica and Tivat. Dubrovnik's Cilipi airport is a relatively short drive away. 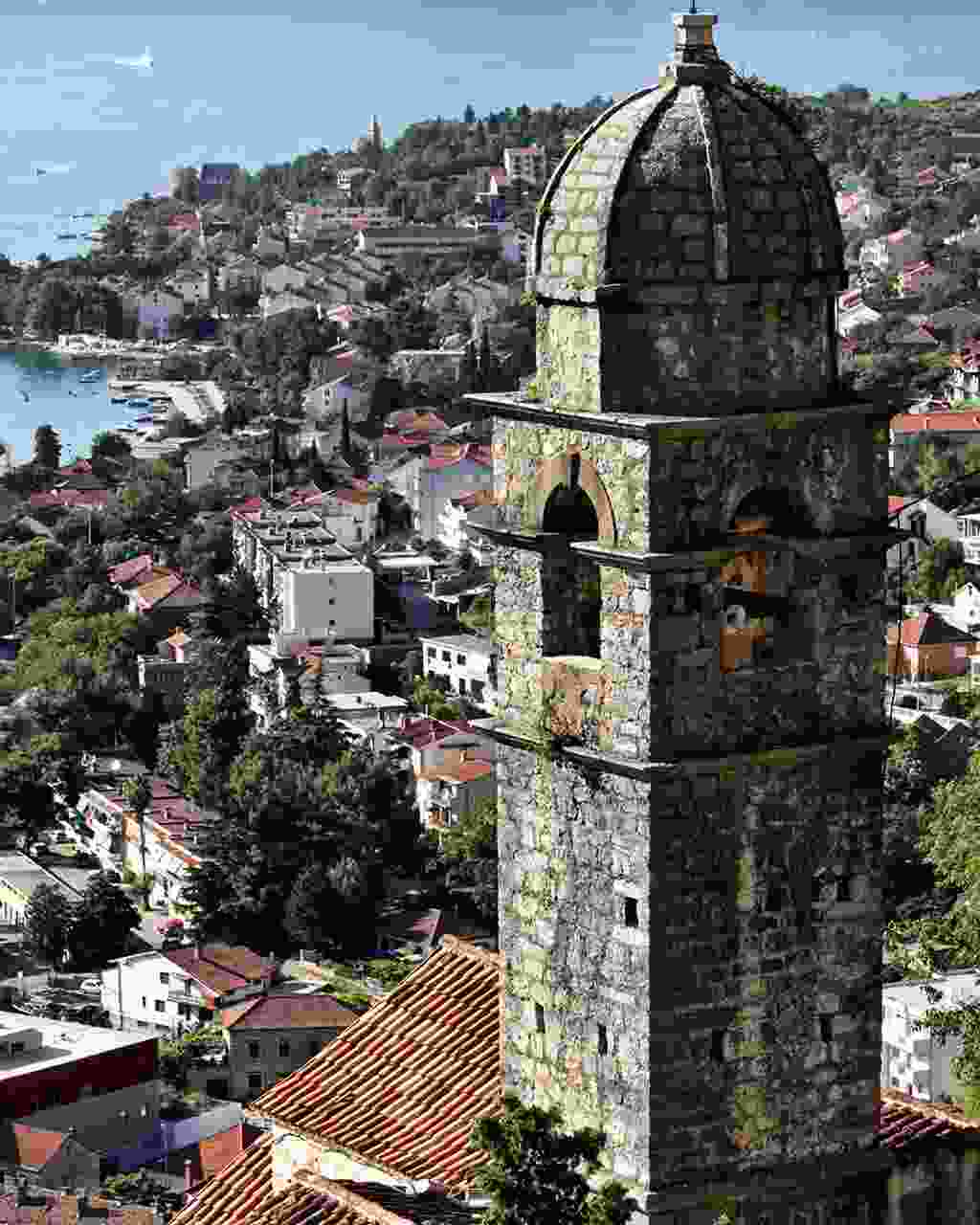 Language: The official languages are Montenegrin, Serbian, Croatian and Bosnian, but both English and Italian are widely spoken. When to go: March to October.