7 ways to relax and recharge in Kagoshima, Japan

Located on the southern tip of Kyushu, the vibrant prefecture of Kagoshima is home to healthy cuisine and unique ways to unwind, offering travellers numerous opportunities to invigorate body and soul ...

1. Be enveloped in geothermally heated sand 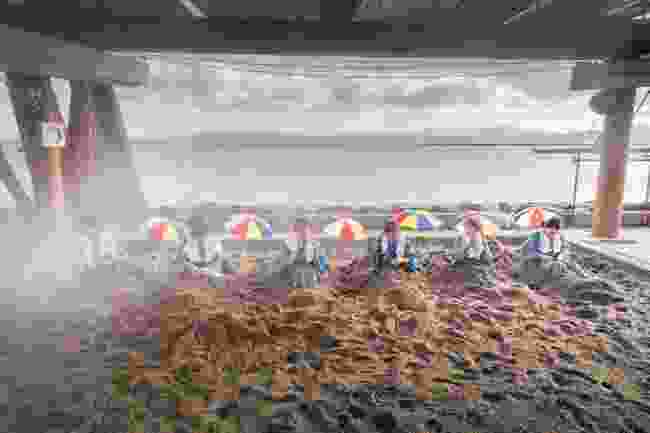 On the southeast coast of Kagoshima’s Satsuma peninsula lies Ibusuki, a resort town with a hot sand beach that people have been visiting to boost their health for more than 300 years. The secret behind this natural phenomenon? The Kirishima volcanic belt running through the prefecture, which creates hot springs just below the ground that raise the sand’s temperature to 50–55˚C.

Today, many sand baths along the coast offer a head-to-toe immersion followed by a dip in an indoor hot spring. Simply don a yukata (cotton kimono), wrap your head in a towel and stroll onto the shore where you will be covered in hot sand for about 10 minutes. In addition to being a stress buster, the experience is proven to boost complexion, improve circulation and rid the body of impurities.

2. Gaze on an active volcano 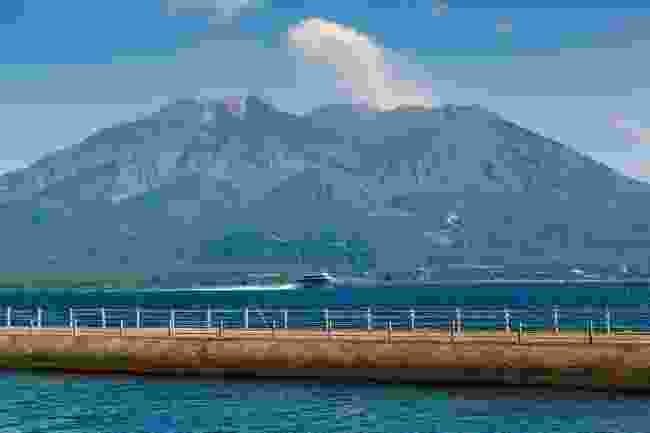 Sakurajima is an active volcano (Keith Crowley at TOKYOFOTOS)

Sakurajima is an icon of Kagoshima prefecture. Nestled in central Kinko Bay and only four kilometres by ferry from Kagoshima City, the active volcano is an almost ever-present landmark on the horizon in the bay area. With lush green foothills and a craggy top that appears to change colour depending on the angle of view and time of day, the 1,117m peak is a sight to behold, even when it’s not billowing smoke and ash high into the air, which happens almost daily.

There are a multitude of dedicated viewing spots throughout the bay area with many even offering a chance to soak in a hot spring while taking in the view. Shiroyama Hotel Kagoshima’s outdoor onsen offers an unparalleled view from its location, some 100m above sea level. Or for a close-up look, opt for the 100-metre-long Yogan Nagisa Park Foot Spa on Sakurajima’s lower slopes. 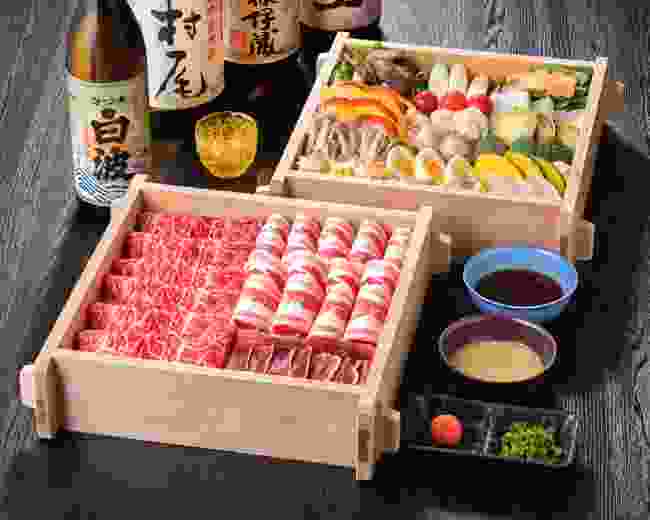 With an expansive natural landscape and mild climate, Kagoshima is one of Japan’s key agricultural larders, making it a delight for gourmands.

Perhaps most renowned is its highly nutritious satsuma-imo (sweet potato). Kagoshima produces more of this tasty root vegetable than any other prefecture in Japan and you can find many varieties baked or chipped in meals and in traditional confections – you can even find it in ice-cream!

The fertile volcanic soils of Sakurajima support a huge range of produce including the largest daikon radishes in the word, according to the Guinness Book of Records. These white radishes can weigh 20–30kg and gain circumferences of 120cm. 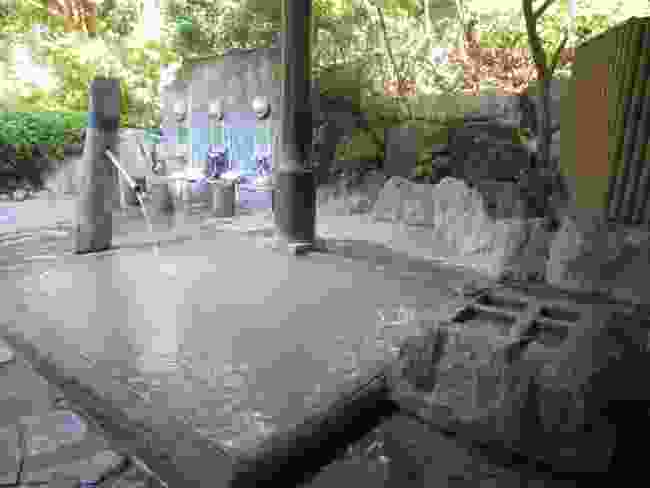 Soak in a volcanic mud bath in Kagoshima (Kathryn Wortley)

With more than 20 volcanoes located in a mere 60 sq km, Kirishima Geopark near Kagoshima Airport is saturated with mineral-rich soil. Each week, staff at Kirishima’s Sakura Sakura Onsen travel to one of the nearby hot spring lakes to collect this material and remove any impurities it contains before turning it into mud to use at the hot spring.

The mud is stored in a large stone pot adjacent to the outdoor bath. To gain maximum benefit, wash as normal and have a dip to warm yourself up before applying the cold grey mud. Once it dries and becomes a white colour, rinse off and get back into the bath, and you'll emerge with skin as soft as a baby. 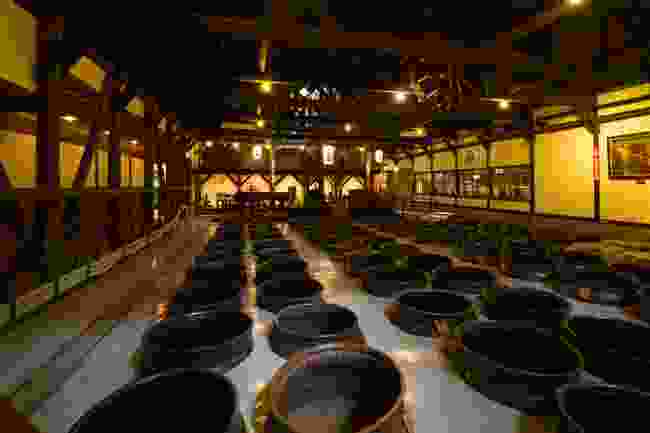 What better place to sample the distilled spirit shochu while in Japan than in Kagoshima, its birthplace? It is thought that shochu know-how arrived in Japan via the prefecture around the mid-16th century. Local people quickly became enamoured with the drink and still are to this day. There are more than 100 distilleries across the prefecture, making about 2,000 types of shochu. Many offer tours and tastings or have exhibits on display.

Kinzangura, operated by Hamada Syuzou, is housed in a disused gold mine near Ichiki-kushikino. The shochu is fermented, stored and aged in earthenware jars within a 120-kilometre-long network of tunnels that provide a constant temperature throughout the year. You can ride the underground rail car into the mine to see production which is carried out by hand using processes that date back to the distillery’s establishment in 1868.

Meijigura, Satsuma Shuzo’s shochu factory and museum in Makurazaki, also produces shochu using traditional methods dating from the Meiji era (1868–1912). The company operates extended production (August to May) at the site, so visit during this period for an insider’s look into how the popular drink is made. 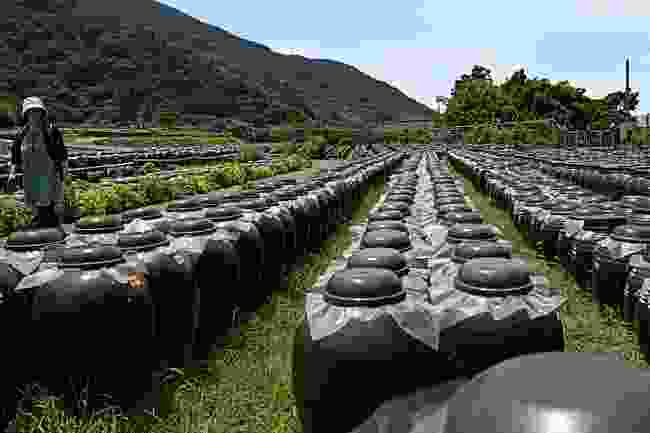 The Fukuyama area along the shores of Kinko Bay is home to row upon row of ceramic jars. Each contains only three ingredients—rice koji, water and steamed unpolished rice—which ferment in the mild climate to become kurozu (black vinegar).

Two centuries of know-how is used in the production of this healthy elixir, said to fight fatigue, aid in detox, burn fat and reduce the risk of cancer. Delicious diluted or as an ingredient in cooking, kurozu becomes smoother as it matures. After one year it is light amber with a mild taste, while a five-year batch is smokier and mellower.

7. Stroll back in time 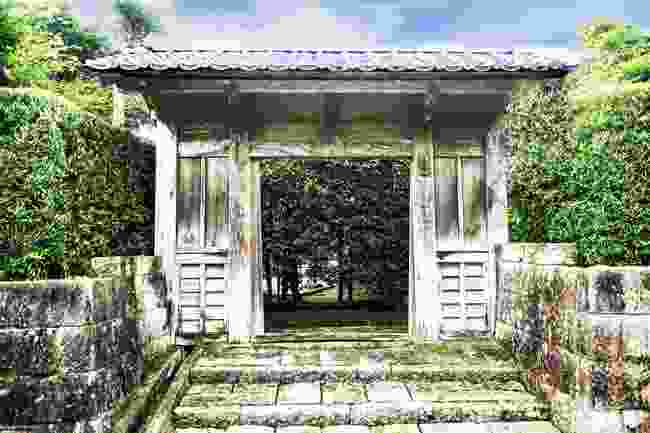 Nicknamed the “Little Kyoto of Satsuma” due to its historic district of samurai residences and gardens, Chiran is the perfect place to take it slow.

Stroll the long stone wall-lined street to see the 200-year-old homes covered in greenery. The absence of any hint of modernity, even telephone poles, will make you feel like you have travelled back in time.

Seven of the gardens are designated places of national scenic natural beauty and use the east Asian tradition of borrowed scenery, whereby the landscape is incorporated into the gardens’ stone, water and green features for maximum impact.

We've barely scratched the surface of the huge array of travel experiences in Kagoshima. To find out more about this incredible part of Japan and to find even more inspiration for your future trip, head over to the official Kagoshima website.