Northeast of Japan is the mountain-boarded region of Tohoku. Be enchanted by blossom-carpeted parks, explore samurai castles, hike the pristine landscapes, ascend sacred mountains and much more...

The Tohoku region in the northeast of Japan is a patchwork of jagged snow-capped mountains, hidden temples and some of the most dramatic coastlines in the world. This often-overlooked area, struck by the 2011 earthquake, has a kind of meditative Japanese spirit you can’t find in other parts of the country. Visiting feels like travelling back to a time when samurai warriors stormed the mountain passes and feudal lords governed from majestic castles. Yet the convenient network of train routes and close connection to Tokyo helps Tohoku keep pace with Japan’s modern spirit. Here are six reasons why you need to visit.

1: It’s home to some of the most remarkable trees in Japan 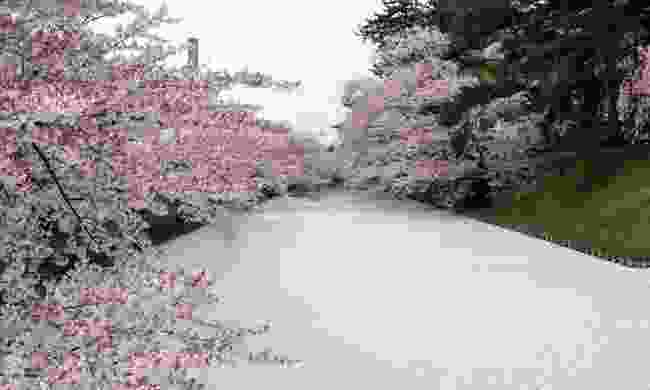 Every year, the cherry blossoms of Hirosaki Park explode into colour for about two weeks. The park — considered one of the ‘top three cherry blossom viewing spots in Japan’ — has over 2,600 pink trees, partly thanks to the Tsugaru clan who moved cherry trees from Kyoto to the grounds of Hirosaki Castle in the sixteenth century. Walk through a cherry blossom tunnel, picnic beneath the ‘weeping’ cherry trees, or paddle a boat around the castle’s moat, with the cherry blossoms cascading down like pink waterfalls. An annual sakura festival takes place every year at the end of April.

In winter, Tohoku is known for a very different kind of tree: the snow monster. At Zao ski resort, in Yamagata, you have the rare opportunity to see juhyo; trees that take on curious shapes from the heavy snowfall and freezing winds. Ride a gondola to the white summit, where these snow monsters stand looming over the mountain. Back at Zao resort, you can warm up in the steaming hot springs.

2: Experience traditional samurai culture in the place it last existed 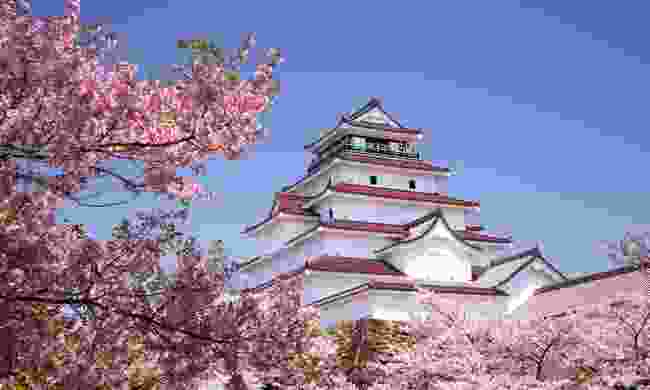 Tohoku is home to the town of Aizuwakamatsu in Fukushima, known as ‘samurai city’, where the last samurai soldiers fought and died at the end of the Edo period. Though the Samurai are gone, the spirit of their culture lives on: the Aizu Samurai Residence acts as a timeless memorial, telling the romantic and tragic stories of that era, like the tale of the 20 teenage Byakkotai samurai who committed ritual suicide at the sight of their castle burning.

The original complex was burnt down in 1868, but the dozens of rooms and gardens have since been reconstructed. You can try a range of cultural activities, from Japanese archery and zen meditation to dressing in yukatas and samurai armour. The impressive red-tiled Tsuruga Castle and seventeenth-century Oyakuen Garden are also nearby. Feudal lords used to visit the gardens to drink matcha; something you can still do today under the ancient gingko trees. While there, don’t miss the award-winning Suehiro sake brewery, founded at the end of the Edo period in 1850, which you can tour before a generous sake tasting.

3: The hiking trails wind through some of Japan’s most pristine landscapes 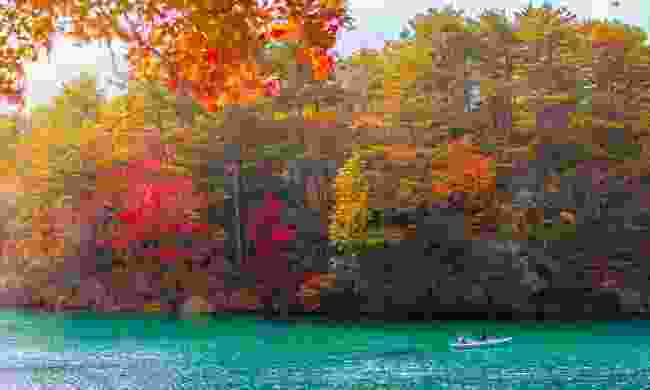 In western Fukushima, you can climb Mount Bandai, a volcano that once exploded in a colossal eruption, transforming the surrounding land to create over 300 smaller lakes and marshes. In winter, you can see swans landing on the glassy waters after their migration from Siberia. If you’re lucky, you might also witness unkai (a sea of clouds) from Bandai’s peak, where the clouds roll in to form a dreamy ocean below.

Not far from Mount Bandai is Goshikinuma, a collection of five unusually vivid lakes that change colour depending on the time of day and season — a result of rare mineral deposits that seeped in after Bandai’s eruption. From bright cobalts to fluorescent greens, these otherworldly lakes make for a great photo opportunity from the walking trails. Also worth hiking is Lake Towada in the north. The route leads along the Oirase River, meandering through maple leaf forests and past white waterfalls that look like they’ve been painted on the mountainside with a single brush stroke.

4: Road-trip along one of the world’s most dramatic coastlines 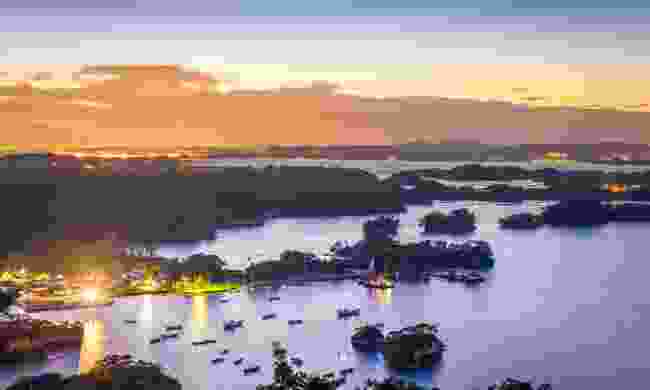 With long open roads and soul-stirring views round every bend, Tohoku was built for road trips. The Sanriku coastline along the east of Tohoku takes in over 100 miles of dramatic, rocky beaches and islands. You could easily lose a few days meandering by car, listening to waves crash against Kaminari Iwa (‘Thunder Rock), one of the top ‘soundscapes of Japan’, or taking a boat ride through Blue Cave, where the water shines a miraculous cobalt colour. You can also try fresh-from-the-ocean sea urchin, a local speciality grown in farms down the coast.

Perhaps Sanriku’s best-known spot is Matsushima Bay, one of the fabled ‘three best views of Japan’. This fishing village turned tourist hotspot is dotted with more than 250 pine-covered islands. Follow the walking paths over red-lacquered bridges, exploring sandy paths through the trees. There’s also another reason to visit Matsushima Bay: the oysters. At all-you-can-eat oyster shacks, you can sit in front of a shucker as you pluck the delicate, sweet meat from the shells with chopsticks. 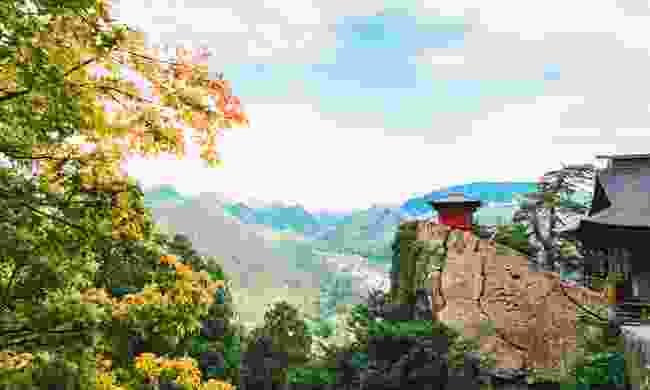 In Tohoku’s remote reaches, sacred Shintō summits jut out of deep green forests. Perhaps the most famous are Dewa Sanzan in Yamagata, a collection of three mountains with shrines perched on their peaks, considered to have the oldest history of mountain worship in Japan. The easiest of the three to ascend in a day is Mount Haguro, known for its remarkable five-story pagoda tucked amongst the pine trees at its base. The ascent involves 2,446 stone steps, twisting through sun-kissed sugi cedars and past small mountainside shrines.

Another equally popular day pilgrimage is the scenic temple of Yamadera, perched on a steep mountainside in Yamagata. The 1,000-step climb up to this ‘Place of Scenic Beauty’ is intended to be a meditative experience. In fact, Matsuo Basho, the famous haiku poet, composed his most enduring haiku about the stillness of the mountain at this temple. You can read the haiku from his statue as you take in the rolling green hills below.

6: The summer festivals are considered the best in the country 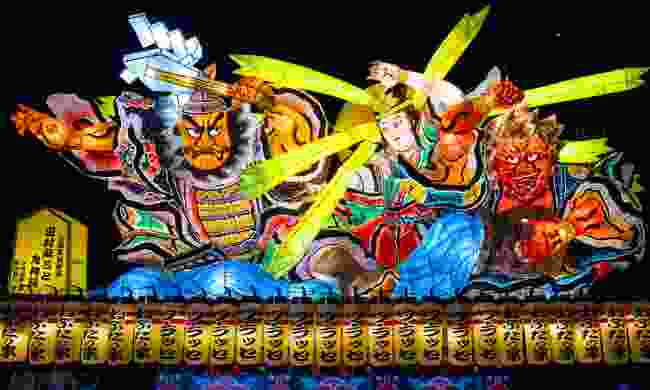 While Tohoku is often considered a meditative place, in July and August it swings into party mode as the towns and cities burst with the rhythm of taiko drums and traditional dance. Matsuri, or festivals, are a calendar highlight across Japan, but Tohoku is particularly well-known for its own 'three great festivals', typically taking place in the first week of August.

The largest is Aomori’s Nebuta Festival, attracting over three million people each year. Enormous illuminated floats fill the streets, accompanied by hoards of people cheering wasshoi! wasshoi! (roughly: ‘heave-ho’). On the final night, a two-hour firework display, impeccably timed to music, explodes into the sky.  One of the best parts of Japanese festivals is the food: colourful stalls sell everything from deep-fried chicken karaage to grilled squid on a stick — the vendors belting our cries of irasshaimase (‘welcome’). Make sure you finish with the festival favourite, kakigori; shaved ice doused in sweet-tasting syrup.

The southern reaches of Tohoku are easily visited from Tokyo in under two hours with the bullet train. The Japanese Rail Pass allows unlimited train rides within a set time period.

Tohoku is an all-season destination, with cherry blossoms in spring, festivals in summer, spectacular autumn maple leaves and frozen winter scenery. For those visiting for the autumn 2019 Rugby World Cup, it makes an easy week-long stop-off from Tokyo to Sapporo, where games are being held.

For more information about travelling in Japan,visit the Japan National Tourism Organisation's website