It may be the smallest of Japan's main islands, but with breathtaking cycle routes, captivating artwork and a sacred pilgrimage trail, an island of adventure awaits in Shikoku...

The rural region of Shikoku is the smallest and least populated of Japan’s four main islands, connected via a network of bridges to the mainland of Honshu, including the world’s longest suspension bridge. Shikoku is often overlooked by tourists due to its remote location – roughly a five-hour train ride from Tokyo – but for those willing to venture off the beaten track, it offers an enchanting blend of old and new Japan, set amongst some of the country’s most photogenic scenery. From authentic family-fun farmhouses to pretty islands dotted with modern art, it would be easy to lose track of time exploring this remote corner of Japan. Here are six reasons why you should go.

1: It’s the setting for Japan’s most famous pilgrimage 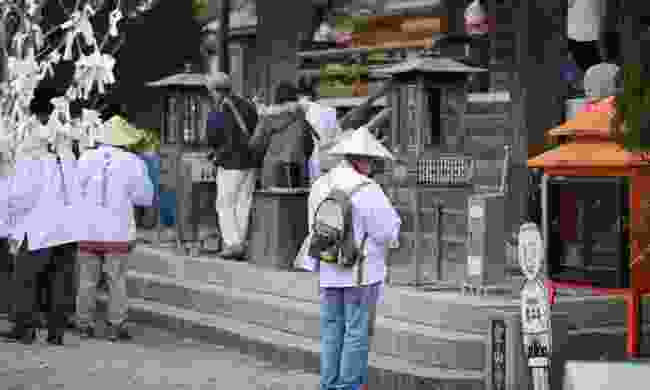 On the Shikoku Pilgrimage route (JNTO)

The 88 temple Shikoku Pilgrimage is a 1,200-kilometre route that loops the entire island – one of the few circular-shaped pilgrimages in the world. The route is traditionally completed on foot taking at least a month, but modern-day pilgrims also use modern-day means, including cars and buses. It’s easy to get by, staying in traditional inns and huts along the way, and relying on the generosity of the Shikoku locals who offer snacks to pilgrims passing by.

While many people complete the route for religious reasons, it’s also an opportunity to escape the pace of life and spend time reflecting. When the path winds into the mountains, it’s like you’ve walked into a painting; the green canopy of trees flecked with red and yellow flowers, the hazy peaks ahead. The temples are not as ornate as those found in Kyoto, but they are striking in their simplicity, and remarkable in their location. On a still day, when the temple bell sounds, it’s as if the whole world is listening.

2: The locals are extremely proud of their regional food 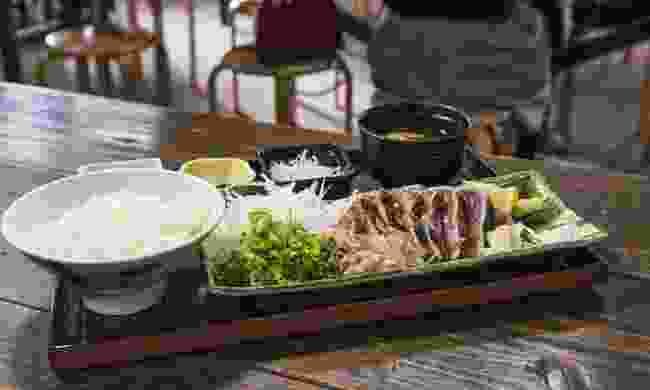 As Shikoku was largely disconnected from the rest of Japan until 1988, it developed its own unique food culture. It’s especially known for being the ‘home of udon’ – the thick white noodles served in a warming broth. Kagawa, on the northeast coast, is so proud of this reputation they created the world’s first ‘udon taxi’ to drive you between restaurants. Not only does the driver take you to his favourite places, he eats with you, teaching you about the local food, culture and history. You can also visit the Nakano Udon School to learn to make this noodle from scratch.

On the opposite coast from Kagawa is Kochi, home to the Hirome Market that opens nearly every day beside Kochi Castle. The giant food court was created as a way to introduce the island’s fishing and agriculture specialities, including fresh yuzu juice, a yellow citrus fruit that grows in giant groves on the island, and locally-caught bonito roasted over straw.

3: You can whizz along some of the world’s best cycling routes 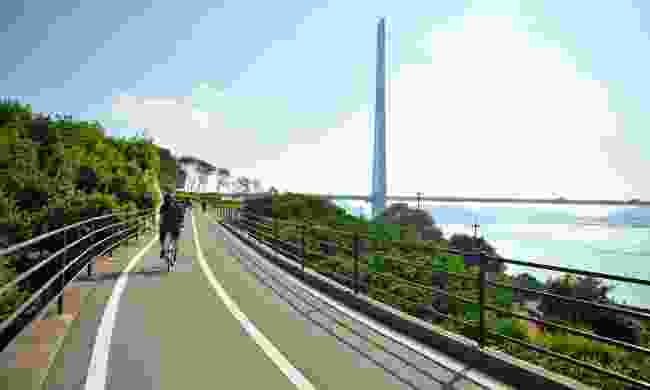 To the Japanese, Shikoku is synonymous with natural beauty. On the Shimanami Kaido, a relatively flat 70-kilometre cycling route that joins mainland Japan to Shikoku, it’s easy to see why. The route meanders across six forested islands in the Seto Sea, connected via elaborate bridges above the azure ocean. Pick up the route in Onomichi City and cycle through coastal towns, valleys and citrus groves, with grapefruits the size of cannonballs.

Keen cyclists should also not miss the 196-kilometre Shimanto River route, in the south of Shikoku. The water is said to be the clearest in Japan, where mountains form mirror images in their reflection. The route takes you past traditional fishing villages, seaweed farms and chestnut groves, as well as the world’s first dragonfly reserve. For both routes, bikes can be rented from one end and dropped off at the other.

4: There are entire islands dedicated to modern art 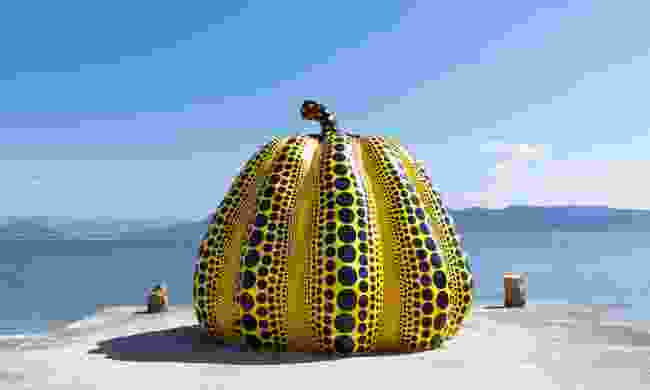 Between Shikoku and mainland Honshu lies a collection of tiny islands connected by ferry. Tucked into the folds of the mountains and beside sandy beaches are dramatic art installations, from enormous mechanical structures to underground galleries. The art project was started as a resurgence effort after the islands’ populations dwindled, turning many of the abandoned homes into exhibition spaces or artworks themselves.

The Setouchi Triennale International Art Festival, which takes place on 12 of the islands every three years, is a celebration of this art effort. The next festival is happening in 2019, when 150 new and modern artworks by some of Japan’s best artists will be exhibited among the fields, coasts and villages of the islands. As you wander through the countryside, it feels as if you’ve walked into a Japanese video game, exploring bizarre and fantastical art structures amongst scenery that snags your imagination.

5: You can experience centuries-old culture 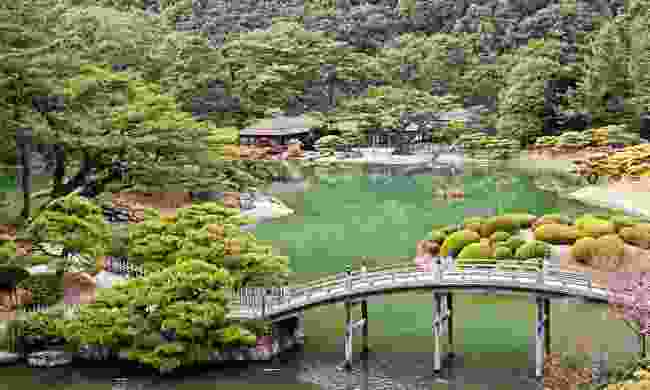 Ritsurin Garden, in Kagawa, is considered one of the best historical gardens in Japan. It was built for the feudal lords of the Edo period, featuring mirror-like green lakes, intricately-shaped bonsai trees and pavilions soaked in light. The tea house, where lords would sip matcha, is a good place to stop and soak up the view. Close by is Matsuyama Castle, one of Japan’s 12 ‘original castles’. Shaped like a five-tiered wedding cake, it stands proudly on a hill, accessible by a short hike or ropeway ride.

Kagawa is also home to Japan’s oldest complete kabuki playhouse, Kotohira Kanamaruza Theatre, dedicated to the classical Japanese dance-drama. Explore the grand main hall and backstage dressing rooms, where men don elaborate costumes, wigs and eye-catching makeup. If you’re lucky, you can catch a show and watch a performance style unchanged since the Edo period. While there, you should also explore the Kompirasan shrine on the mountain above, the most popular shrine on the island. The ascent involves an arduous 1,368-step climb, but the views from the top are worth the effort. 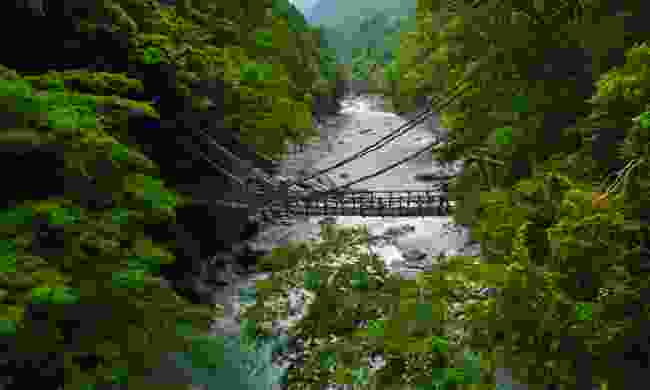 Shikoku’s Iya Valley is one of the few places in Japan that still feels truly wild. This isolated region, famously described in Alex Kerr’s Lost Japan novel, was a hiding place for defeated warriors in centuries gone by. One of the country’s ‘three hidden valleys’, the steep slopes and rocky gorges have largely resisted modern day development, helping retain the charm and authenticity of an older, more meditative Japan. You can still hike the same mountain passes the retreating samurai took, zig-zagging over the vine bridges that were once the only way to cross the valleys.

At night, stay in a kominkan; traditional thatch-roofed farmhouses that pepper the hillsides. These homes are characterised by their authentic wooden design, usually family-run and found in remote locations. Dinner is often served over a traditional charcoal irori fire, before a night sleep on futons on sweet-smelling tatami.

With Finnair, Air France, KLM and Cathay, you can fly from London to Osaka, on Japan’s mainland. From there, take the overnight Orange Ferry, or travel in under three hours by bullet train using the handy Japan Rail Pass.

Shikoku can be enjoyed throughout the year, but the maple leaves in autumn are particularly spectacular. Spring is a great time for cycling, while summer – though hot – is perfect for the island’s many watersports. For those visiting Kyushu in autumn for the 2019 Rugby World Cup, Shikoku makes a great stop en route from Tokyo.