Journey to Georgia: Lesser-known places well worth a visit

From bustling cities to lesser-known mountain towns, two writers reflect on their time in Georgia and what makes the Peach State so special

A Taste of Atlanta

Rooted in the railroads, razed to the ground twice (during the American Civil War and the Great Atlanta Fire of 1917) and the epicentre of America’s civil rights movement, Atlanta has grit in its history and determination in its bones. It’s a city of transformation and enterprise; one that has faced its past and is taking strides towards the future.

I start my visit on a rooftop with an icy frosé in hand on a sultry summer evening. I’m at Ponce City Market, a hub of shops, restaurants, a food hall and apartments in the Old Fourth Ward. It started life in the 1920s as a Sears warehouse; now its roof houses Skyline Park, a slick collection of bars, slides, vintage games and views. Peering over the urban sprawl, I see high rises and traffic, sure, but greenery pops out too. The city has made a real effort to create pockets of nature and renew run-down neighbourhoods and areas. One fine example of this can be found near Historic Fourth Ward Park, which edges Atlanta’s celebrated BeltLine, a car-free trail adapted from old railroad tracks. We set off along the Eastside Trail, which connects Midtown’s rambling Piedmont Park to Reynoldstown. The wide walkway bustles with walkers and cyclists and is edged by native trees and wildflowers. 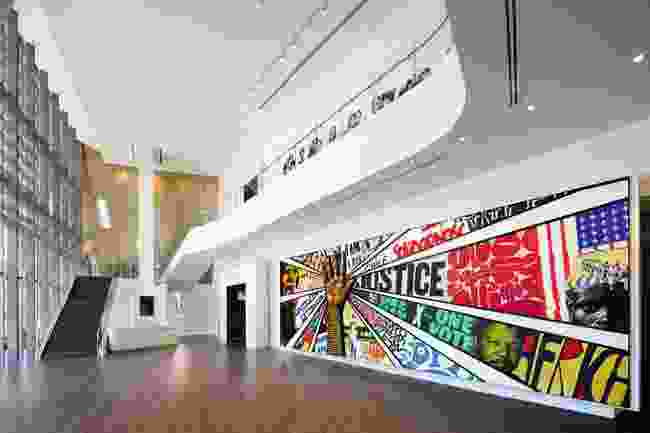 The BeltLine corridor (which will form a 35km loop when complete) is dotted with stores and hip food joints and is a hive of community initiatives and public art. Graffiti-lined Krog Tunnel is a must-see, as are the large murals along Wylie Street. We pause for dinner at Two Urban Licks. Housed in a renovated warehouse with fine views, it’s noisy, hip and high energy.

Atlanta’s food scene is exciting, with an ever-expanding crop of restaurants and food halls. Krog Street Market was one of the originals. Located near the Irwin Street BeltLine entrance, be sure to stop by for tacos and margaritas at Superica or chicken ’n’ waffles at Soul: Food and Culture.

More local treats can be found at the Municipal Market in Sweet Auburn District, east of Downtown, where you can visit homegrown success stories such as Miss D’s Pralines. The building opened in 1924, a time when Black shoppers were permitted entry but Black vendors had to sell by the curb.

Sweet Auburn was the birthplace of Dr Martin Luther King and is now a National Historic Site. See the eternal flame that burns near Dr King’s grave, his childhood home and the church where he and his father preached.

Afterwards, we head to the National Center for Civil and Human Rights in Downtown, which charts the history of the country’s civil rights movement. It’s immersive, unflinching, free thinking and all about the power of people to create change, much like Atlanta.

Singing along in Savannah 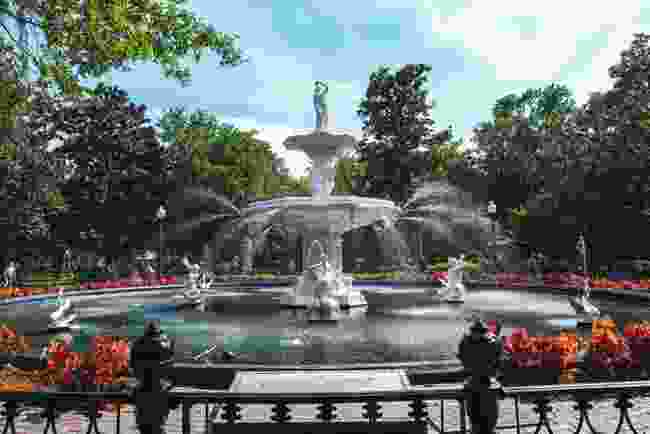 Savannah is like a soft southern song. As I walk among cobbled squares shadowed by live oak limbs draped in Spanish Moss, my shoulders drop, my steps slow and I am transported to another time. It’s not surprising. Savannah is the belle of the south. Its Historic District is lined with 19th-century mansions of every architectural style: enormous Greek Revival columns and Gothic-style pillars rub shoulders with Italianate balconies and stately Regency homes. As I soak up this blend of times gone by, I watch riverboats paddle the river.

But that’s only half the story. Savannah is that rare jewel of US urbanism that not only embraces its history but transcends it.

“We’re laid back,” one local tells me, sopping up the last of her shrimp and middlins (rice grits) with a glass of cool white wine. “But we play hard too”. This city may have one foot firmly in the past, but the other is tapping a new song.

It starts at the river. Stretching for a mile along its southern bank, River Street is a place to sip and stroll. Terraces gaze out across the water and spill over with laughter and the scent of barbecue. I sip on a margarita, watch the sun set, then order myself another. It’s that kind of place. 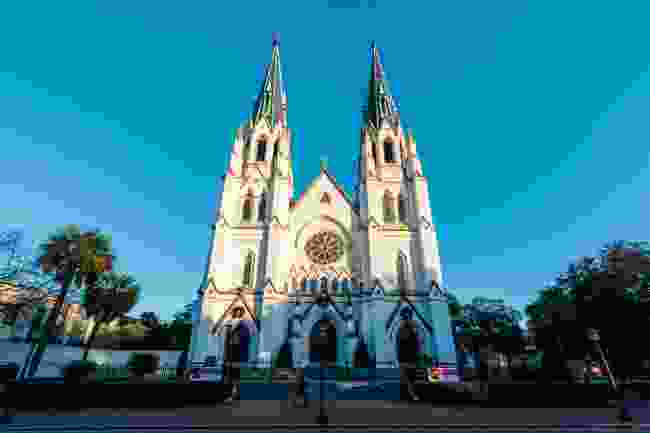 The Cathedral Basilica of St. John the Baptist is the oldest Roman Catholic Church in Georgia (Geoff L Johnson Photography)

But Savannah’s new heart is the Plant Riverside District, a buzzing entertainment hub that opened in 2020 with live music venues, nightlife and dozens of eateries and hip bars. This is the city’s cool younger brother. Try Myrtle & Rose, a rooftop garden bar with botanical-inspired craft cocktails, or Electric Moon, where you can take an actual slide from its balcony down to a busy outdoor terrace below.

The food scene is taking off as well, and there’s much more to this city than your usual southern-fried fare. The Grey, for example has been leading the way with its Art Deco style and tapas-like fine dining. It’s hard to beat, but bursting onto the scene are restaurants such as Ardsley Station, set within the aptly named and glitteringly hip Starland District – and with a truffle lobster mac that’s to die for. There’s also an exciting new secret speakeasy champagne den hidden behind a door at the Mint to Be Mojito Bar (or so the rumour goes).

That’s what this city is all about. The old southern song is still playing, sure. But now there’s other music too. It’s getting louder. It’s the sound of the new Savannah, and it’s impossible not to sing along. 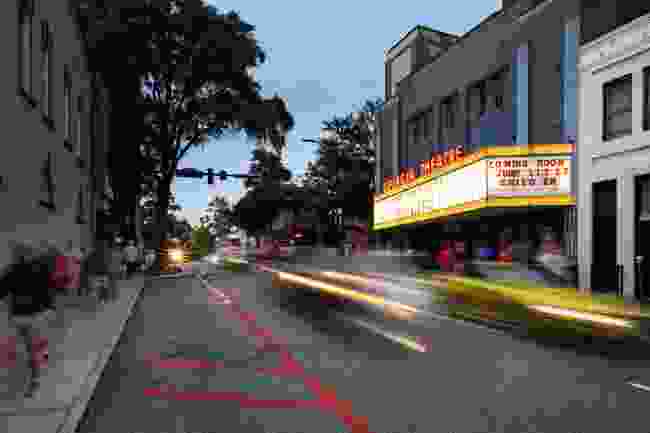 An ethereal voice floats across on the warm breeze as I sink my teeth into a honeyed Georgia peach and browse stalls piled high with fruits, jars of jellies and cheeses. It’s Saturday morning and the Athens Farmers’ Market is in full swing; not only does it celebrate local producers but it champions emerging acts too. Music, food and a small-town vibe combine to make Athens, set in the foothills of the Appalachians, a real southern charmer.

Hometown of the B-52s and R.E.M, its thriving music scene is evidenced by the abundance of live music venues in town. It’s got a really fun vibe, helped by its student population – Athens is home to the University of Georgia, the nation’s first state university – and craft brewing scene. It’s pretty, too, with leafy avenues, clapboard houses and 19th-century mansions.

We admire some of the houses on our walk to Heirloom Café & Fresh Market in the Boundary neighbourhood. Another champion of local farmers, the brunch menu here is studded with regional delights: buttermilk biscuits, pulled pork hash with baked eggs and crispy collards, and Doscuit Holes (cinnamon sugar-spiked balls drizzled with bourbon salted caramel). The meal staves off any lingering tiredness from an evening spent sampling local brews at Creature Comforts alongside live music. 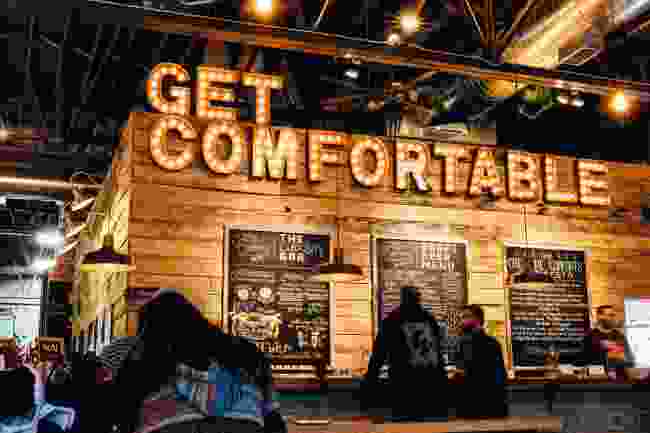 We’re staying at the Graduate, a boutique gem near the university campus. We opt for a walking tour that traces the town’s musical history. One stop is Weaver D’s, whose ‘Automatic for the people!’ sign was immortalised in an R.E.M album. It’s the place to get fried chicken and collard greens, but we choose lunch at Last Resort Grill instead, a one-time 1960s music club-turned- gastronomic hotspot that gives US comfort food a southern twist.

After a mooch around the vintage emporiums and cult music stores of downtown, we visit Five Points, another handsome neighbourhood with magnificent mansions (some now fraternity and sorority houses), indie bookstores and laid-back cafés.

Our time here ends on a high, with cocktails, local music and killer views on the rooftop bar of historic concert hall Georgia Theatre. 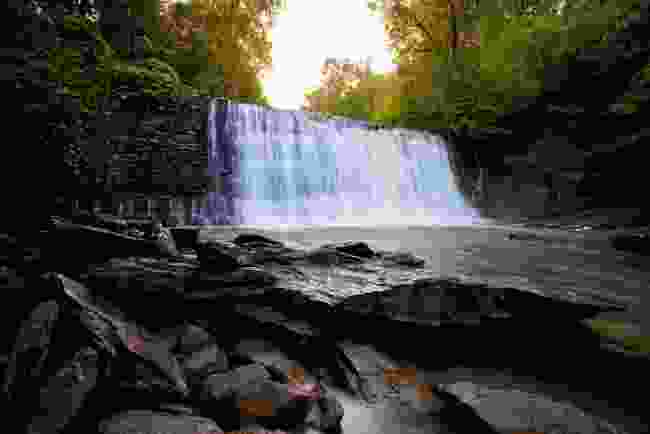 Within easy reach of Atlanta, in Roswell you can kayak or hike along a 15km stretch of the Chattahoochee River, then head downtown to rifle around the local art galleries. Walking tours lead to historic antebellum mansions and the ruins of the Roswell Manufacturing Company along Vickery Creek. By night, ghost walks unleash the spooky secrets of this old mill town and craft breweries beckon for great beers and good times. The food scene is a talking point too – stroll along Canton Street to take your pick. 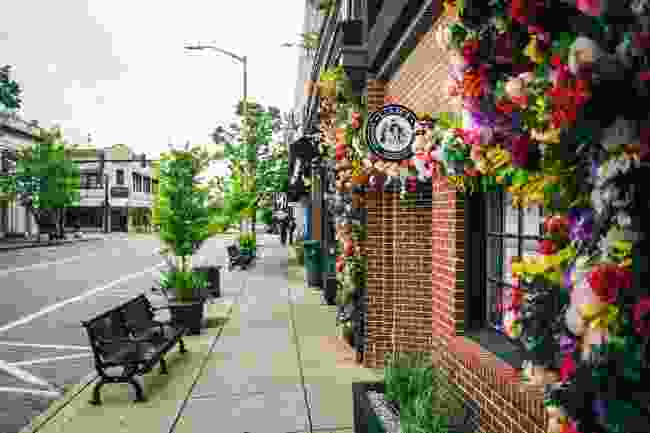 The history of Thomasville is still very much alive (Explore Georgia)

Famed for its roses and old-world feel, this flower-festooned town lies in the far south-west of Georgia. Stroll around its historic houses and green spaces. Don’t miss the Thomasville Rose Garden (complete with 1,500 blooms) or the Big Oak, an ancient moss-draped live oak tree. Be sure to sample the town’s emerging food scene: opt for the shrimp and grits at Jonah’s Fish & Grits and try small-batch wines at Farmer’s Daughter Vineyards. Craft brewers Tvelo Brewing Company is also about to hit the scene.

3 mountain towns worth a visit Every day is Christmas in the town of Helen (Shutterstock)

This mountain town in north Georgia is a popular getaway for Atlantans who come to hike, bike, visit wineries and embrace nature. There are 106,000 acres of Chattahoochee National Forest, and many come to tackle the long-distance Appalachian Trail, which begins here. Other – less ambitious – trails lead to waterfalls like Long Creek Falls and Amicalola Falls (the highest) through forests where you may spot bears and bobcats. The Toccoa River is a hotspot for tubing, kayaking and rafting. Campgrounds and hotels also abound, but this is the place to hole up in a cosy cabin to watch fireflies (or lightning bugs, as the locals call them) dance in the dark from your stoop.

Dahlonega, whose name stems from a Cherokee word meaning ‘yellow’ or ‘gold’, is another scenic town in the Blue Ridge Mountains. It was the site of the USA’s first major gold rush, which started in 1829. Learn its story at the Dahlonega Gold Museum inside the old Lumpkin County courthouse, then go underground at an old mine and even pan for your own gold. Explore Dahlonega’s public square, quaint stores and cafés – the Smith House is a southern institution – then wind your way around the mountain roads. This is the heart of Georgia’s wine country, where tastings and soaring views await around every corner.

Located in Georgia’s north-east mountains, on the edge of the Chattahoochee-Oconee National Forest, this Bavarian-ish village should stick out like a sore thumb, but Helen manages to style it out. It was transformed into an alpine village in the 1960s, though it doesn’t take itself too seriously. As well as a gorgeous location, it offers visitors a whole host of outdoor activities (from angling to zip-lining). It also attracts those who love it for its year-round Christmas ‘shoppe’, kitsch candy stores and irresistible cinnamon-scented bakeries.

But if you only do one thing here, make it tubing down the Chattahoochee River on a hot summer’s day. It’s quite a thrill and a great way to see the town at play.

Go from dining on cutting-edge cuisine and bar-hopping along cool urban trails to tasting cool-climate wines and hiking to tumbling waterfalls in the Appalachian mountains on North America Travel Service’s Pure Georgia Gold tour. This 18-night round trip starts and ends in Atlanta.

For more Georgia travel information and inspiration, head over to the official Georgia website.