How to get to Formentera and getting around Formentera is a great island for cyclists (Jaume Capellà

Getting there:
Regular flights from the UK to Ibiza Airport by easyJet, Ryanair, British Airways and Jet2 take approximately two hours.

Getting to the Ibiza ferry terminal:
The L10 bus runs regularly from Ibiza Airport to the ferry terminal in Ibiza town. It takes about 25 minutes and costs €3.50 one way.

Getting from Ibiza to Formentera:
A 30-minute ferry service is provided by Med Pitiusa,Trasmapi Baleària and Aquabus from Ibiza town to La Savina in Formentera. Baleària also offers a direct ferry service from Palma, Mallorca. You can book the ferry online but you don't have to as you can also buy tickets at the port directly. You can see the full schedule here.

Getting around by bus:
Four bus routes (L1, L2, L5 & L7) including the N6 night bus, operate a regular service to key towns and beaches in Formentera.

Getting around by foot:
Formentera has an excellent network of 32 ‘green routes’ of rural paths and tracks. Much of the terrain is flat, so walking is a perfect way to explore the island.

Getting around by bike:
Bikes, electric bikes and scooters can be hired in La Savina and from specialists island wide.

If you only do three things in Formentera 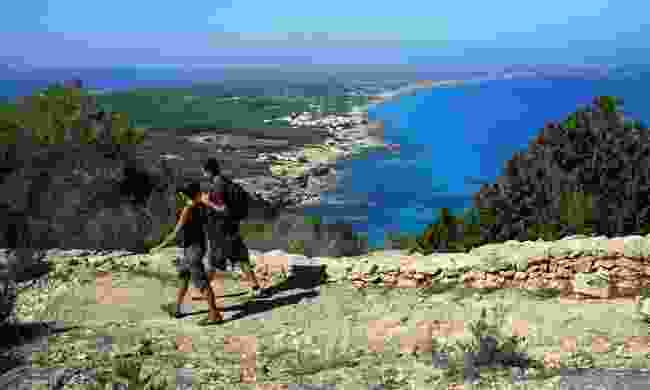 A 130km network of well-maintained hiking and cycling trails, known as the green routes, criss-cross the island and serve to connect the sleepy, picturesque villages. As Formentera is mostly flat, walking and cycling through the lush countryside and along the sandy, asphalt and gravel tracks is a joy. Breathe in the briny, warm air as you wander past dunes and Sabin Junipers, golden wheatfields, forests of pine and carob trees, and verdant vineyards. Cycle to the island’s four historic watch towers or explore Pla de La Mola, passing ancient dry-stone walls and sheep sheltering beneath giant fig trees as the you head for hidden coves or the island’s emblematic lighthouses.

As Formentera lies halfway between Africa and Europe, thousands of migratory birds arrive during the Spring and Autumn, attracted by the island’s diverse eco-systems, lagoons and wetlands. Start your birdwatching trip at Ses Salines d’Eivissa i Formentera Natural Park which stretches from the south of Ibiza to the north of Formentera. Over 200 avian species have been recorded at this pristine park including bright flamingos, puffins and woodpeckers. Alternatively, take a boat ride northwards to the peaceful Freus islets, a UNESCO Heritage Site, home to the protected Posidonia seabed meadows and countless marine birds. This is the domain of Audouin’s gull, European Shag, Petrel and the Balearic Shearwater. Visit the lagoon of Estany Pudent, formerly a historic saltpan,where flamingos, Shelducks, Sandwich Terns and the Great Skua thrive. Indigenous species include the Balearic warbler, Peregrine Falcon, Hoopoe and Gold Finch. 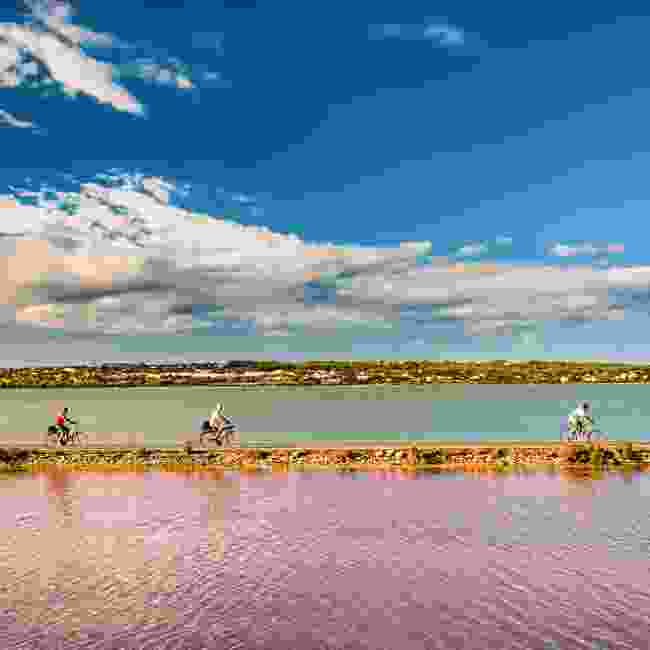 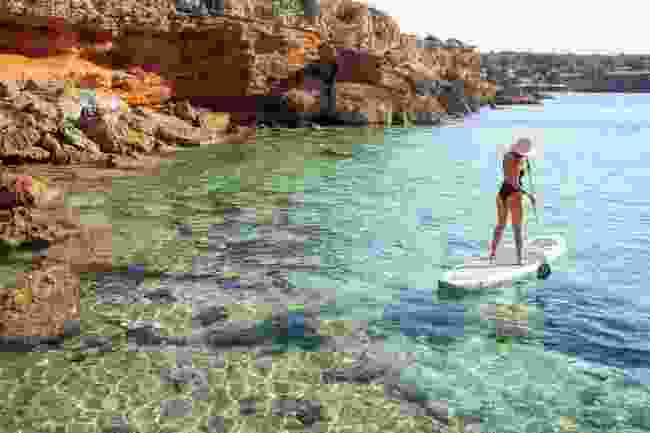 Enjoy the water activities on offer in Formentera (Cala Saona)

3. Get stuck in with the water activities

With 69 kilometres of virgin coastline promising crystalline, cobalt-blue waters and powdery white sand, it’s little wonder that water sports abound. Activities for all levels include diving, snorkelling and kayaking or simply taking a lazy boat ride. For diving enthusiasts, the tiny northern islands of Espalmador and S’Espardell within Ses Salines Natural Park, offer clear turquoise waters, while beaches, Ses Illetes or Migjorn, with its six kilometres of soft sand, are ideal for paddle surfing, kayaking and snorkelling. A sail from Cala Saona to the dramatic red cliffs of Punta Rasa and the underwater caves is a must for would-be mermaids.

Three must visit beaches in Formentera 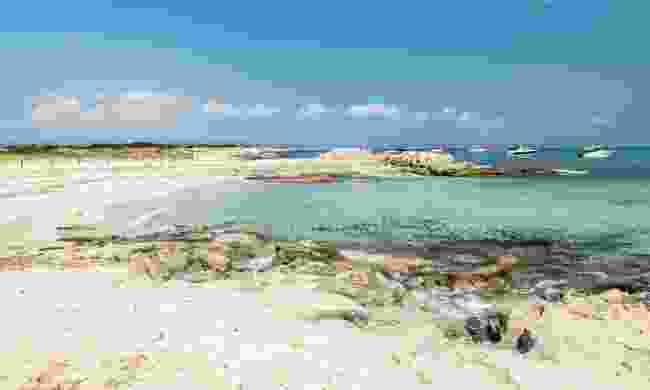 Regular 40-minute round-trip sails from La Savina to the peaceful, private island of S’Espalmador off the northern tip of Formentera cost €22.50 (£19.50). Choose from sandy S’Alga beach, the coves of Cala de Bocs and Sa Torreta or wallow in mud in the central salt plain. Bring refreshments, sunscreen and parasol as there are no amenities. 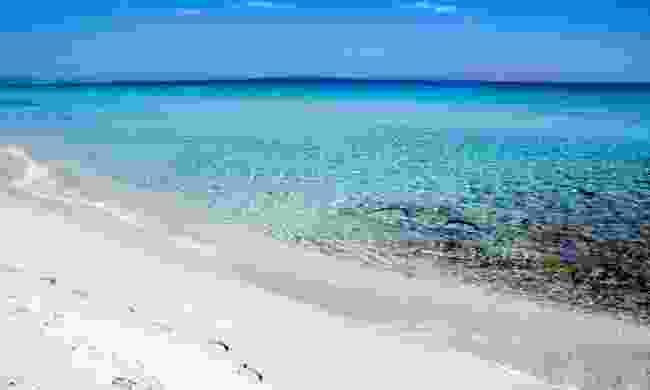 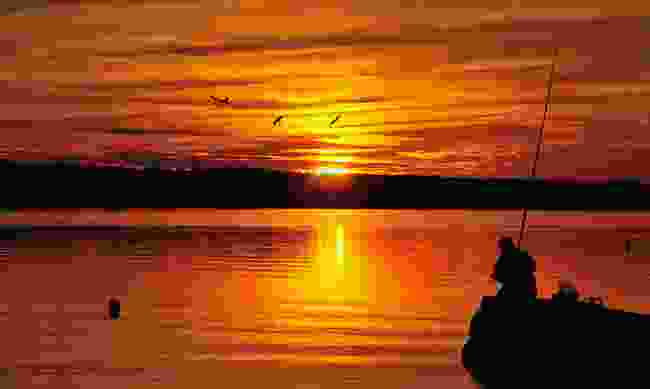 This craggy cove flanked by fiery cliffs and fringed with pine trees and quaint wooden boat houses, has a safe, sandy beach and simple chiringuito bar offering drinks and snacks. Clamber up the red rocks on either side for clear vistas out to sea or visit the high cliffs of Punta Rasa by boat.

A spotlight on... sustainability in Formentera 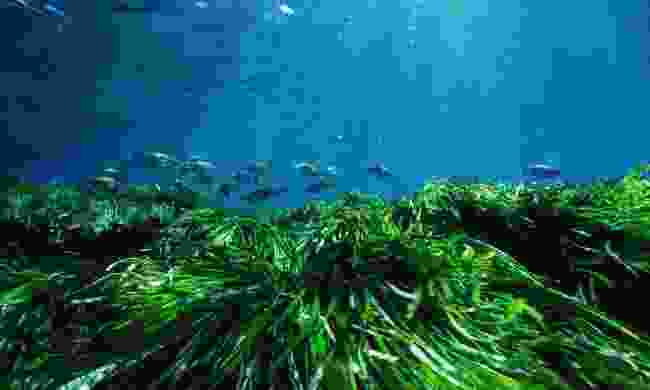 The Balearic Islands have long been reputed for their eco-credentials and conservation is something the local government of Formentera takes very seriously. Enter the Save Posidonia Project, a pioneering conservation initiative set up to protect Posidonia Oceanica, a unique seagrass believed to be the reason behind the Mediterranean Sea’s turquoise colour.

And it is well worth protecting. The Posidonia is one of the most important natural values ​​of Formentera, playing a significant role in the coastal ecosystem by contributing to maintain the quality and oxygenation of the water by filtering the sediments which gives the water its unique transparency.

So how can you get involved? The initiative allows both companies and individuals to sponsor a small patch of the seagrass for as little as one euro, the funds from which go directly to the programme. Over 250,000 sqkm of the Posidonia Oceanica meadows have already been sponsored and preserved.

That's not the only way Formentera's environment is being protected. The Plastic Free Ibiza and Formentera movement started in 2018. Formed of local non-profit organisers, they work alongside volunteers to raise awareness about plastic pollution and offer solutions to reduce the use of single-use plastics. Their goal? To ensure both Formentera and Ibiza are free of single-use plastics by 2023.

How to spend 48 hours in Formentera 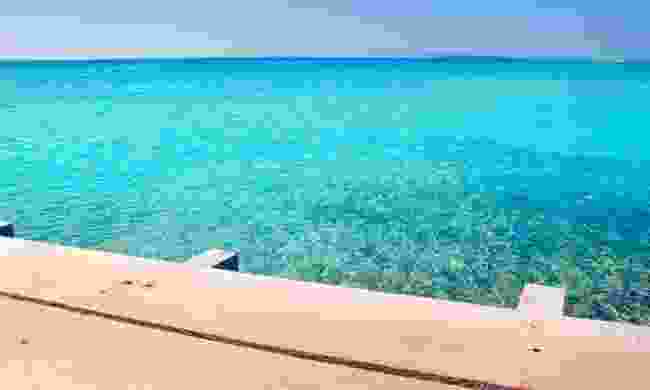 Head to La Savina for a takeaway breakfast at el Tamis Formentera before hopping on a ferry to the private island of S’Espalmador. Here, enjoy the wild and natural sandy beach and clear waters of S’Alga or birdwatch at the saltwater wetlands of Sa Bassa de S’Espalmador. Inland, visit the defence tower of Guardiola, the coves of Bocs and Sa Torreta and natural mud baths of the salt plain.

Return by boat to La Savina, passing the turquoise waters of Illetes beach en route. Head to Sant Francesc and pop by the Spartan white fortified church, inaugurated in 1738. Also in the plaça is the tiny 14th century barrel-vaulted chapel of Sa Tanca Vella and close by, the two-room ethnological museum.  If you arrive by 2pm, browse the local craft market and enjoy an authentic Italian ice-cream at La Mukkeria. Once refreshed, follow the road to the remote, lunar-type landscape of the Barbària Peninsula to view the meagre remains of three 3,800-year-old Bronze age settlements, the secluded lighthouse and 18th century Garroveret watch tower.

Take a detour to Cala Saona for a fortifying mojito at the Kiosko bar and climb up the south side of the red rocks to watch the sun go down. From here, go east to lively Es Pujols and enjoy dinner on the terrace overlooking the sea at Tahiti Beach Formentera. There are also many great restaurants in Paseo Maritimo to admire the sea views such as S'Avaradero. 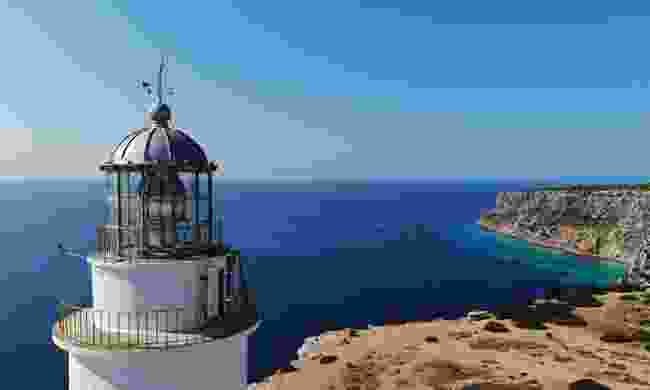 Rise early to catch the morning sunrise at Playa Llevant or Illetes before stopping for breakfast at S'Espardell in Es Pujols. Now, take in the splendour of the megalithic tomb of Ca Na Costa with its concentric circles of stone and watch the flamingos, Terns and Balearic Shearwaters in the shimmering lagoons, formerly salt pans, of Estany Pudent and Estany des Peix. Make your way to Sant Ferran and visit both the 19th century sandstone church and legendary sixties hangout, Bar Fonda Pepe, before enjoying lunch at veggie haven, Blat Picat.

Taking the highway to Castell Romà de Can Blai, the remains of a Roman fortification, and follow Green Route 32 to La Mola through wild and rugged countryside, passing Terramoll vineyards and El Pilar de la Mola church. At the eastern tip is the lonely white Far de la Mola and a stone monument to writer, Jules Verne, who was sufficiently inspired to include it in a novel. Two historic windmills can be found here but newly renovated, 18th century Molí Vell is especially interesting, as it once served as a hippy commune where Bob Dylan purportedly lived for five months.

After a busy day, feast on paella at La Fragata and savour the views over the sea. Later, if it’s a Wednesday or a Sunday, head back to Sa Mola for the evening hippy art and craft market with live music until late. 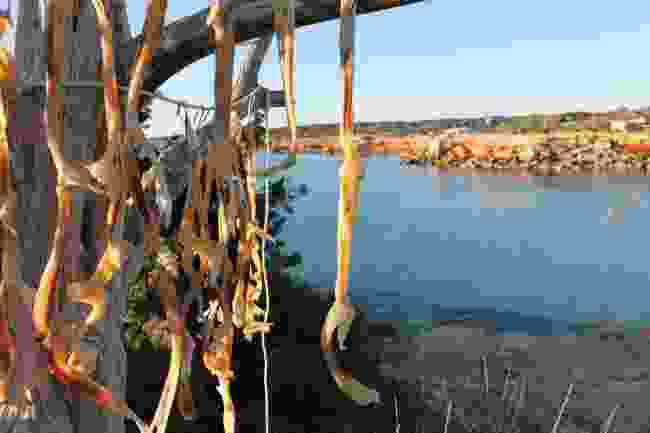 Formentera may be a sun-baked isle but it has sufficient rainfall and good soil to support two wineries, Bodega Terramoll in the South East and Cap de Barbaria in the South. Local grape varieties Fogoneu and, Monastrell produce red wines and Prensal Blanc, Viognier, the whites. Wines are hearty and certainly pack a punch. Digestifs include thyme-based  fríola and herbes, a concoction of anise and wild herbs.

During Spring and Autumn restaurants island-wide offer gastronomic menus over several weekends for just €20 (£17.50) excluding drinks. This allows restaurateurs to showcase contemporary and traditional menus including rich seafood rice dishes such as paella and guisat de peix or salted cod, bacallà.  Desserts include flaó, a dense cheesecake made with eggs, goat’s cheese, sugar and anise.

There is no shortage of delicious local produce in Formentera, such as catch of the day and fresh organic sheep and goat cheese, wild figs and honey. Dried fish is used in popular dishes such as ensalada pagesa combined with tomatoes, bread, and potatoes while sobrassada, cured pork sausage, is lovingly prepared by locals.  Dining is a languid affair and locals lunch around 2pm and enjoy dinner from 9pm, especially during the summer months. Simple homemade pa pages, brown bread with allioli garlic dip is served in most restaurants.

Where to stay in Formentera 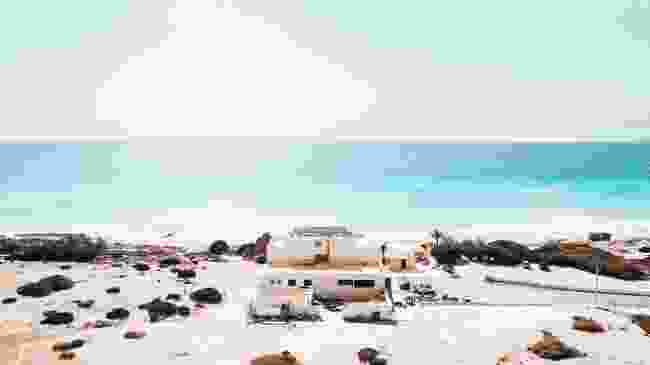 With 14 rooms, laid-back Casa Pacha is the brainchild of Ibiza’s Pacha Group. Situated on Playa Migjorn, the island’s longest sandy beach, its contemporary and comfortable rooms offer private terraces with uninterrupted seascapes. It has a Bohemian sixties vibe offering rooftop yoga and all-day dining at communal wooden tables on the beach.

Newly-opened 79-room Five Flowers in Es Pujols resort is the island’s first five-star hotel. Quirky, colourful and luxurious, its hippy-chic credentials are reflected in the prominent flower motif displayed throughout the dazzling white complex. Rooms have private terraces, some with whirlpools, and guests can enjoy two restaurants and large pools, a spa and rooftop bar.

Revamped by Pablo Carrington of the Marugal Group, Gecko Beach Club has a jaunty, nautical feel and plenty of glamour. It sits right on Playa Migjorn and the 30 deluxe rooms include private terraces, some with plunge pools. A huge sea-facing pool, canopied sunbeds, and dining terrace are surrounded by lush verdant grounds.

For more inspiration and information on travel to Formentera, go to: formentera.es