The beginner’s guide to drones for travel photography

Ever wanted to get started with drones for epic travel photos and videos? Here we teach you the basics – and show you how drones are far easier to use than you might think... 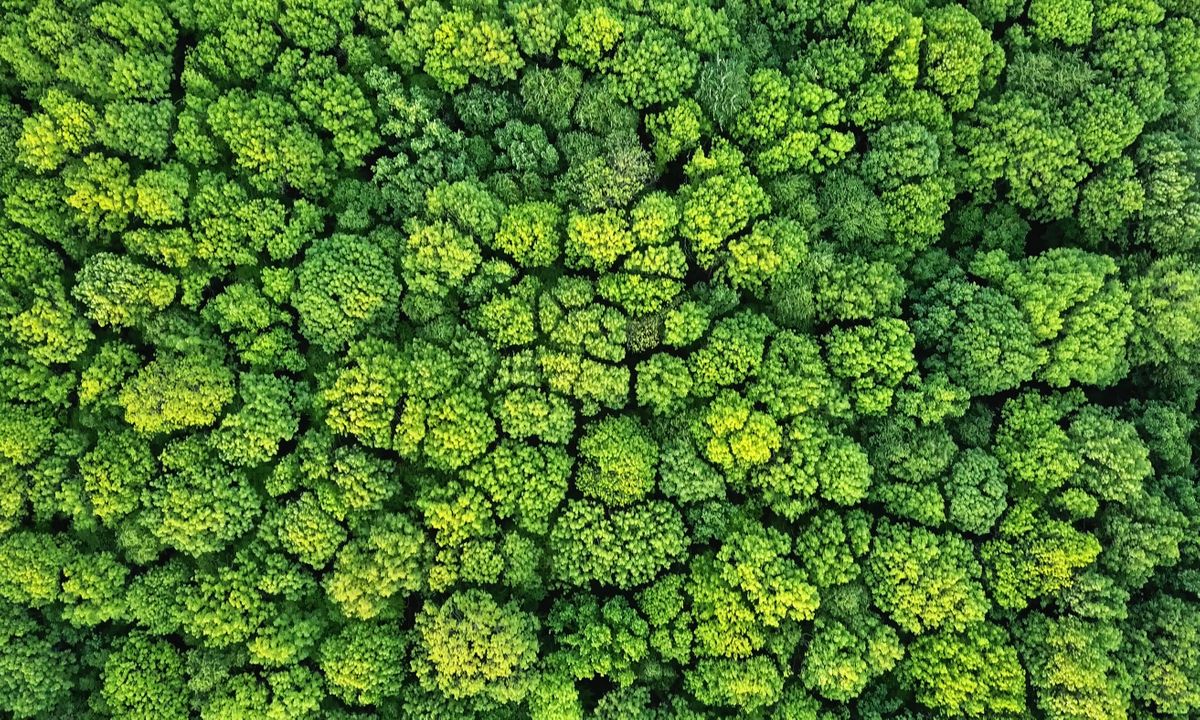 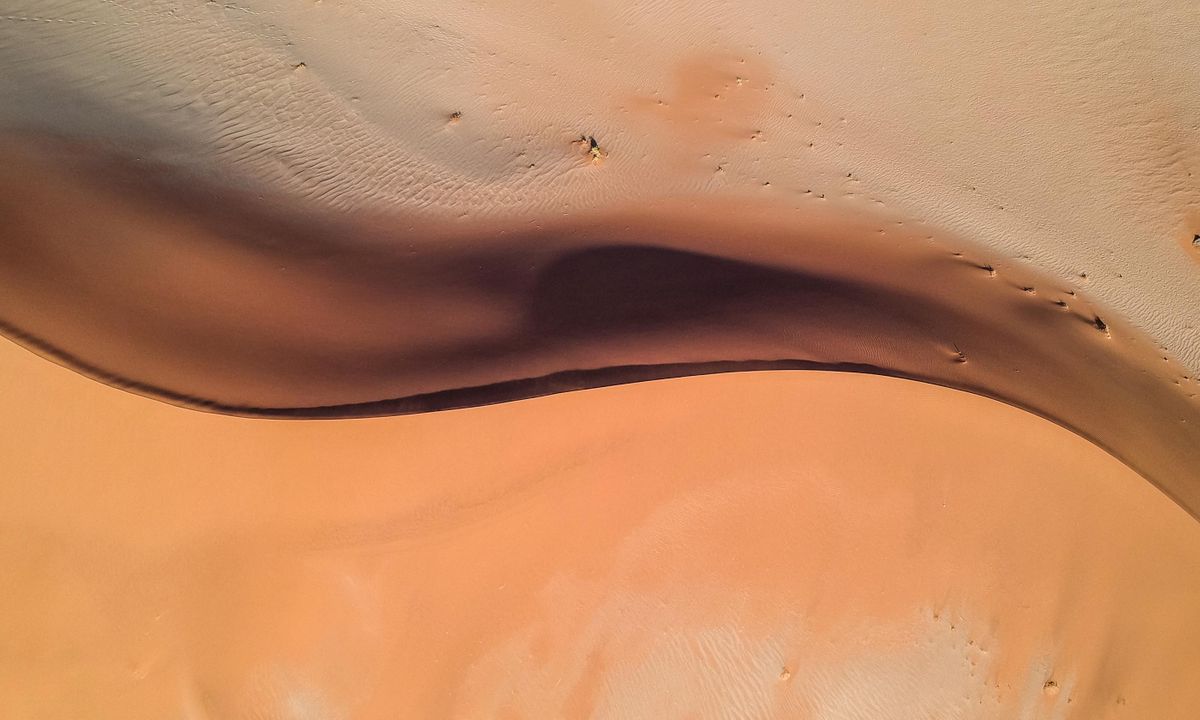 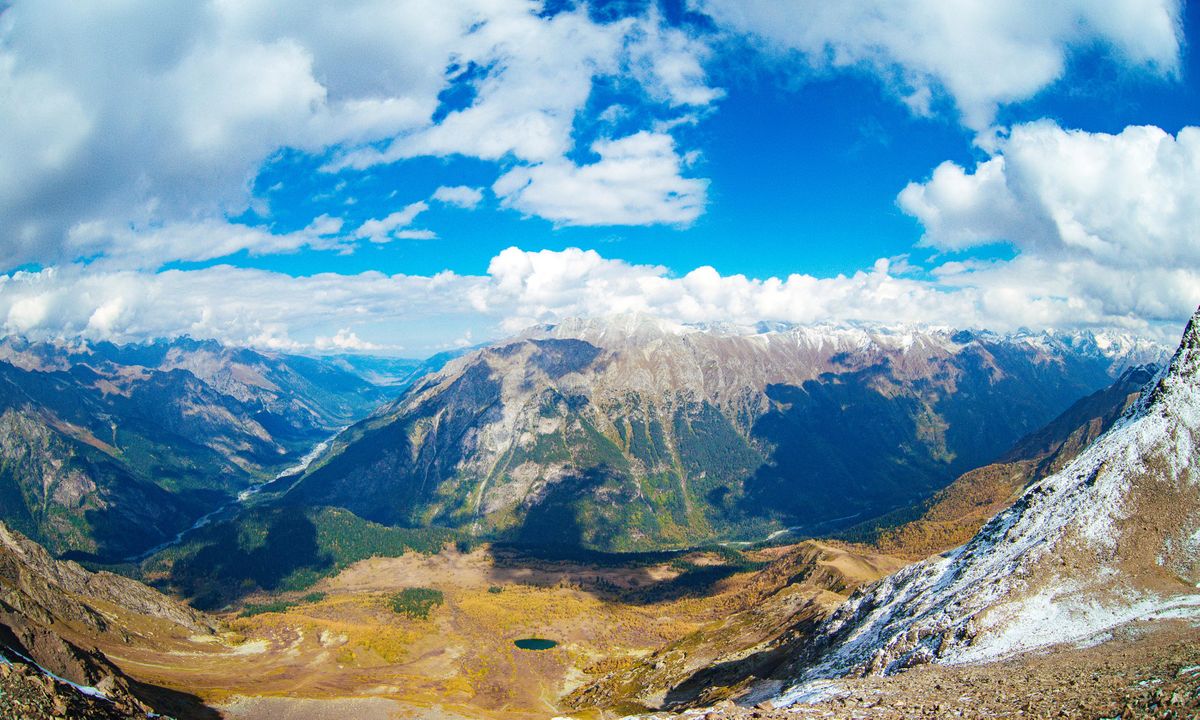 The world of drones is a rapidly growing market. If you’re new to these magnificent flying machines, getting started can be a little daunting. Today, there seems to be drones for every occasion, from tiny stunt drones to large commercial drones used for TV and film. You can even buy specialist drones designed for search and rescue missions, with infrared cameras and high intensity searchlights.

However, if, like most people, you want to get started with drones to elevate your travel photography and videography, you’re in luck. Thanks to the rapidly improving design and technology of drones over the past few years, these machines have never been more affordable, or easy to use. Read on for our complete guide to drones.

What type of drone should you get?

Where are the best places to practice flying drones?

Can you fly drones in any weather?

Do you need a qualification to use drones?

Alternatives to drones for travel photographers

1. How to choose a drone 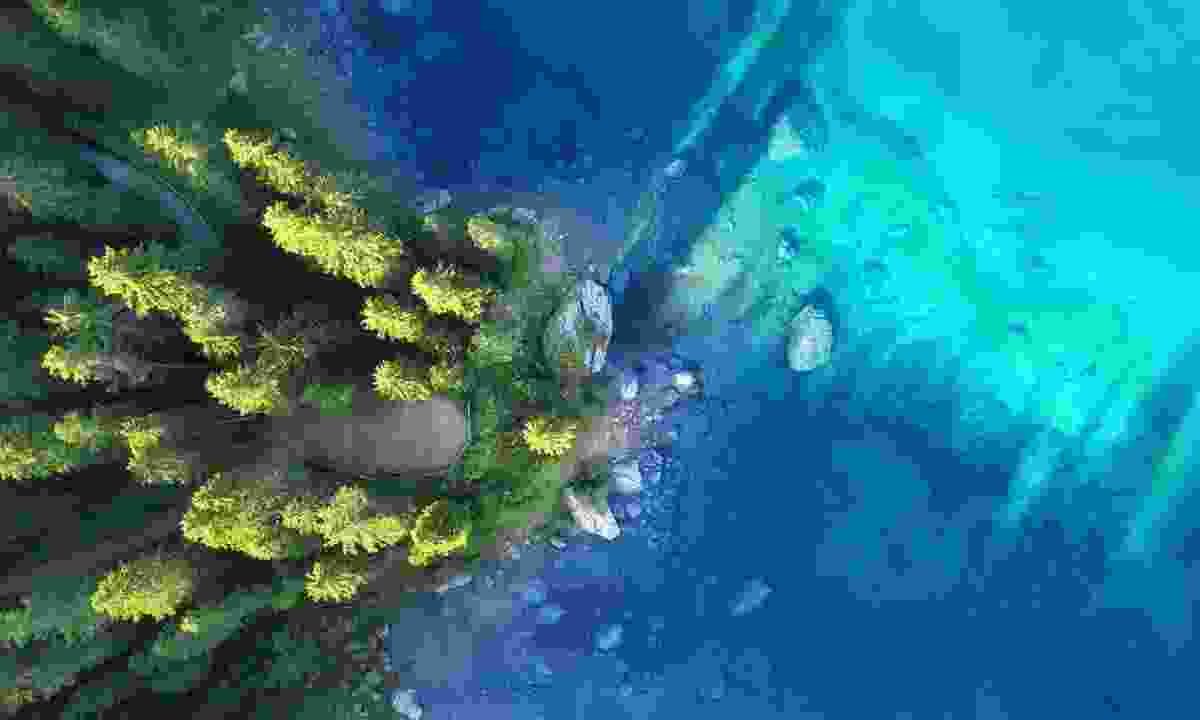 A view of a forest and lake, taken by a drone (Dreamstime)

While drone technology might seem a little intimidating, there is actually far less to consider than when picking a traditional camera or smartphone. In fact, drones can largely be split into two broad categories: drones with cameras and drones without. The latter are naturally much cheaper, but you can’t take photographs or video. And while you can buy attachable cameras, the quality isn’t as good, so it’s better to opt for the built-in camera models if you’re serious about getting good shots. Like with regular hand-held cameras, the specs make all the difference. 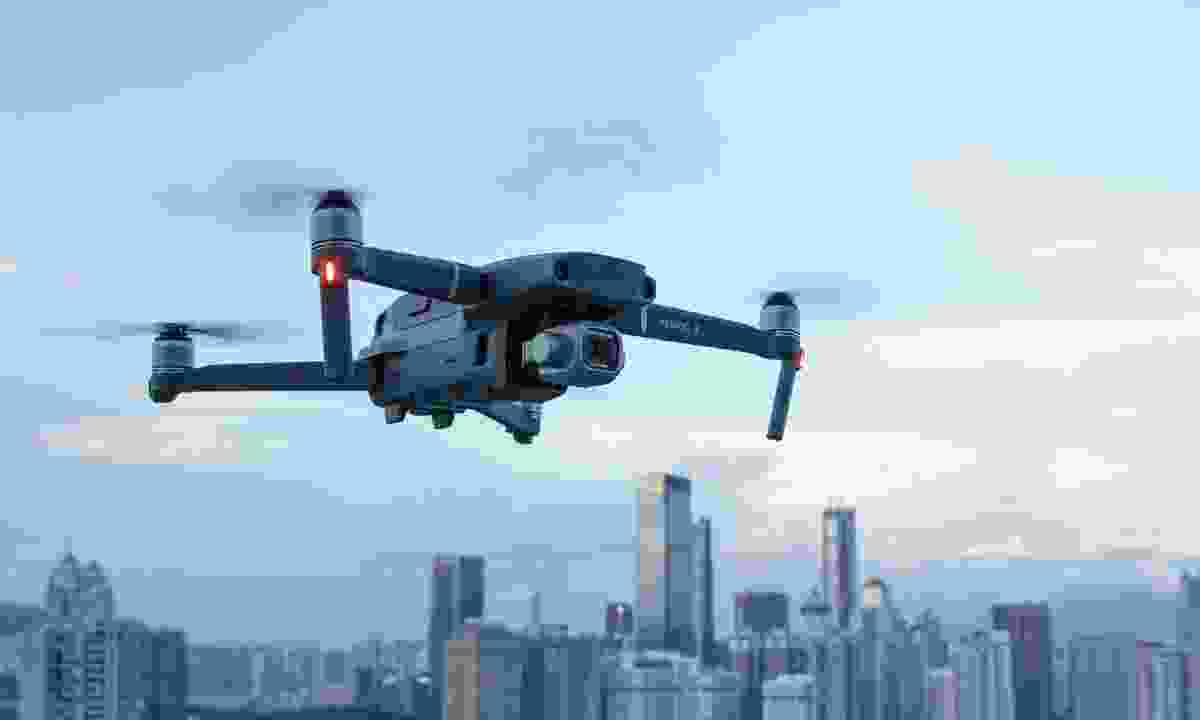 The brand DJI seemed to have cornered this market in recent years. They sell a wide range of drones at different price points and sizes (as well as key accessories like charging packs, propellers and waterproof bags). When picking a drone, it’s important to work out why exactly you want it. If it’s just to capture nice pictures or video on your travels, it would be better to opt for a smaller model that will tuck into your hand luggage – the DJI Spark, for instance. If you want professional level photos and super smooth video though, shelling out for a model more like the DJI Mavic 2 Pro  is probably worth it for those stunning landscapes and HD video.

A good mid-point option is the DJI Mavic Air . Techradar actually rated it their number one ‘drone for beginners’ last year. While its flight time is only 21 minutes, you can get a lot shot in that time – especially with the built-in panorama function that allows you to stitch together 25 photos in just eight seconds, allowing you to create horizontal, vertical and 180-degree panoramas. Usefully, it has a three axis gimbal, helping you create super steady and stunning video. It can also zip along at 42mph, plus it’s foldable, making it much easier to pack into your hand luggage if you’re heading abroad. On Currys PC World’s website, it scores 9.4 out of 10 based on 40 customer reviews. Other factors to consider include whether you want integrated GPS, which lets the machines know where they are in the world (and keep them stable in the air), or ‘follow me mode’, allowing you to run, bike or swim while your flying machine tracks you from above. 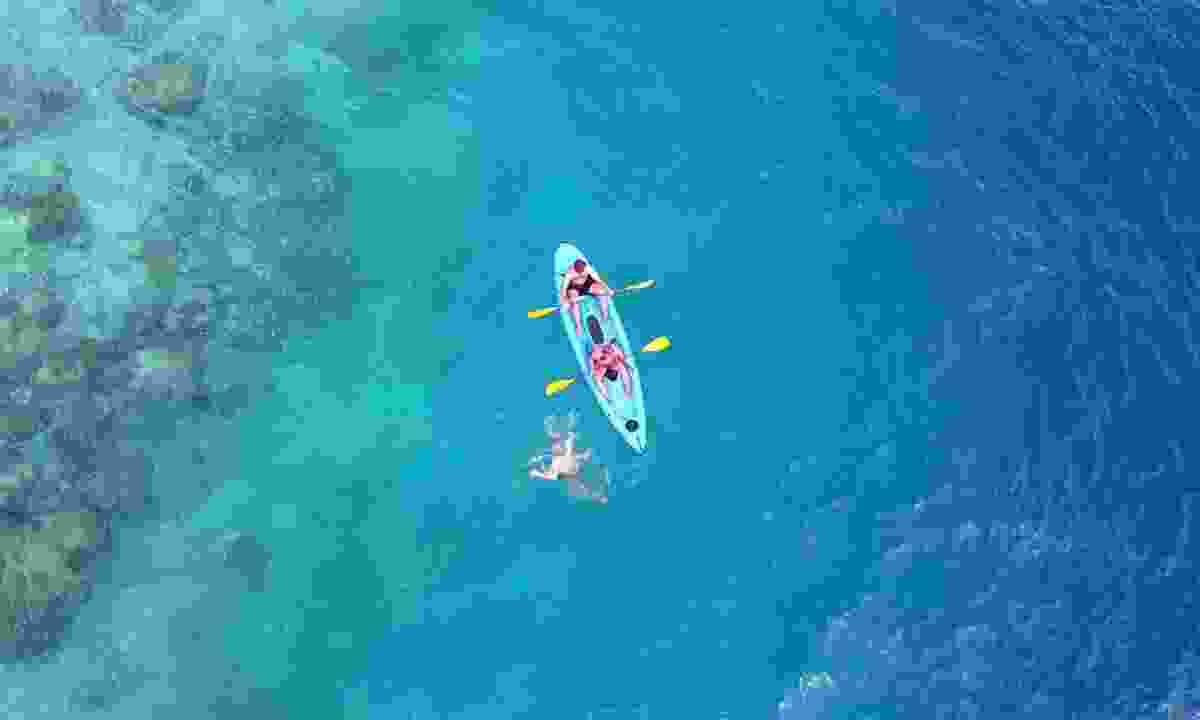 Once you’ve got your gear, you need to work out how to use it. Before trying to shoot photos and video, you need to feel confident with your flying skills. A good idea is to buy a small, cheap drone that you can use in your house or garden to begin with, though the more expensive pieces of kit are actually much easier to use. 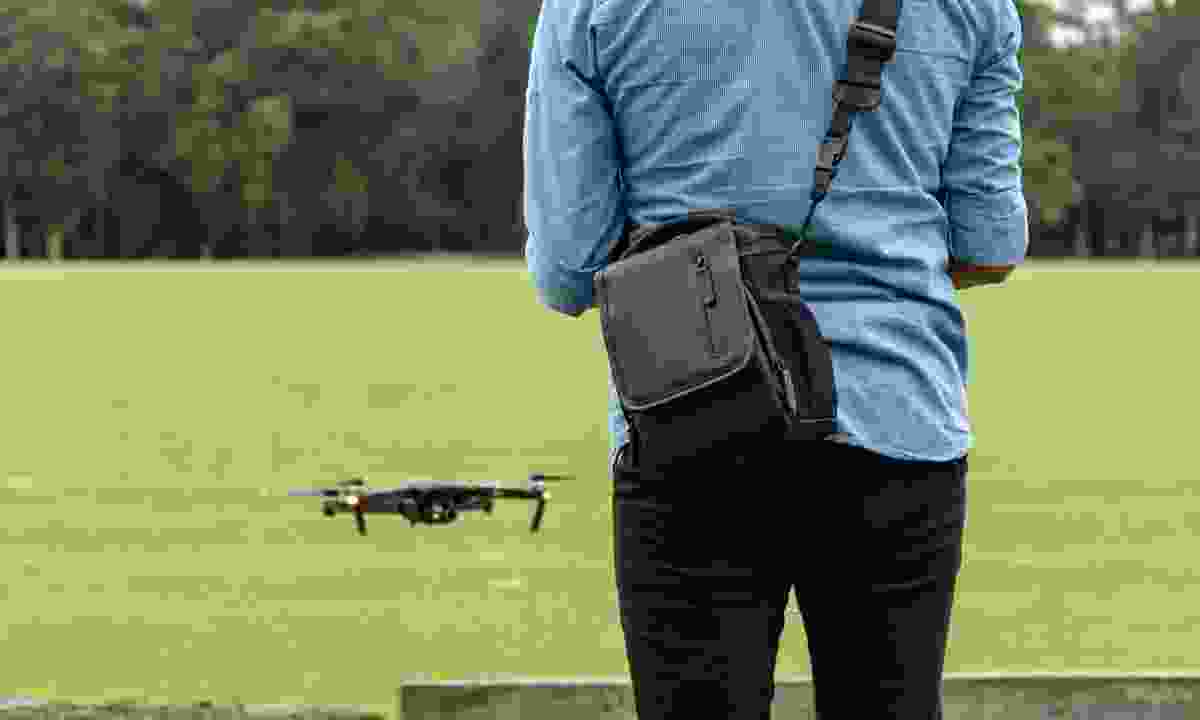 Once you’ve practiced with your drone in your house or garden, look to move to a larger space outside – ideally an open field (Dreamstime)

Once you’ve had a go in your house or garden, look to move to a larger space outside – ideally an open field with no obstacles like power lines or buildings (and preferably no other people). Practice hovering your drone a few metres off the ground, then landing it safely.

You'll actually find hovering very easy with real camera drones like DJIs'. Many people think this is the hardest part, but that's a misconception. While toy drones can be tricky to handle, camera drones have built in functions that allow them to hover for themselves – the GPS tracking and visual positioning systems mean the machine can hold itself steady as it takes off, and it won't go anywhere until you tell it to – pretty clever. 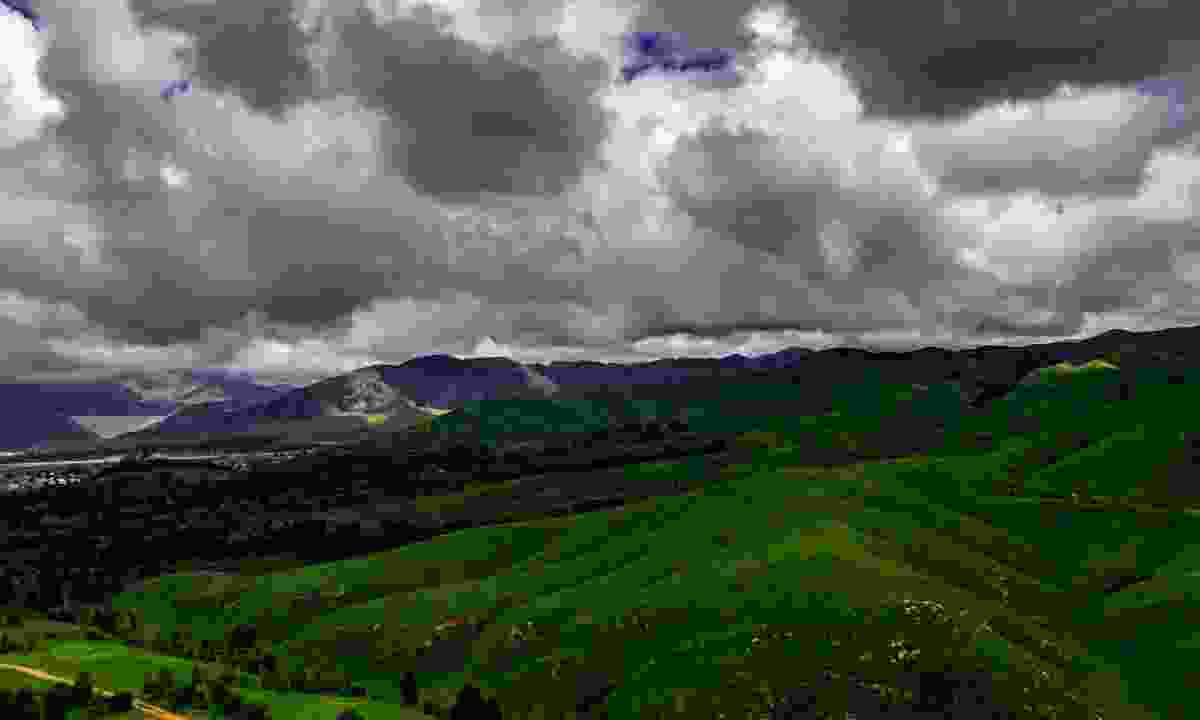 Wind often catches out people new to drones. Each drone has a maximum flying speed (air speed). If the wind is approaching this speed or faster, the drone won’t be able to make any significant progress into the wind, but will go very fast downwind (meaning you could crash). You can usually check wind speeds online before you head out, or download a wind speed app to do while you’re in the field. Your drone will also come with an app that lets you track it in the field. If it's getting blown away from you, the app gives you a really clear readout of where it is, so you can usually check if there is a problem.

What's important to remember though is that modern drones actually have obstacle avoidance technology, which means that it's actually pretty hard to crash. Even if your drone is heading off with a strong gale, it will do its very best not to hit an obstacle. 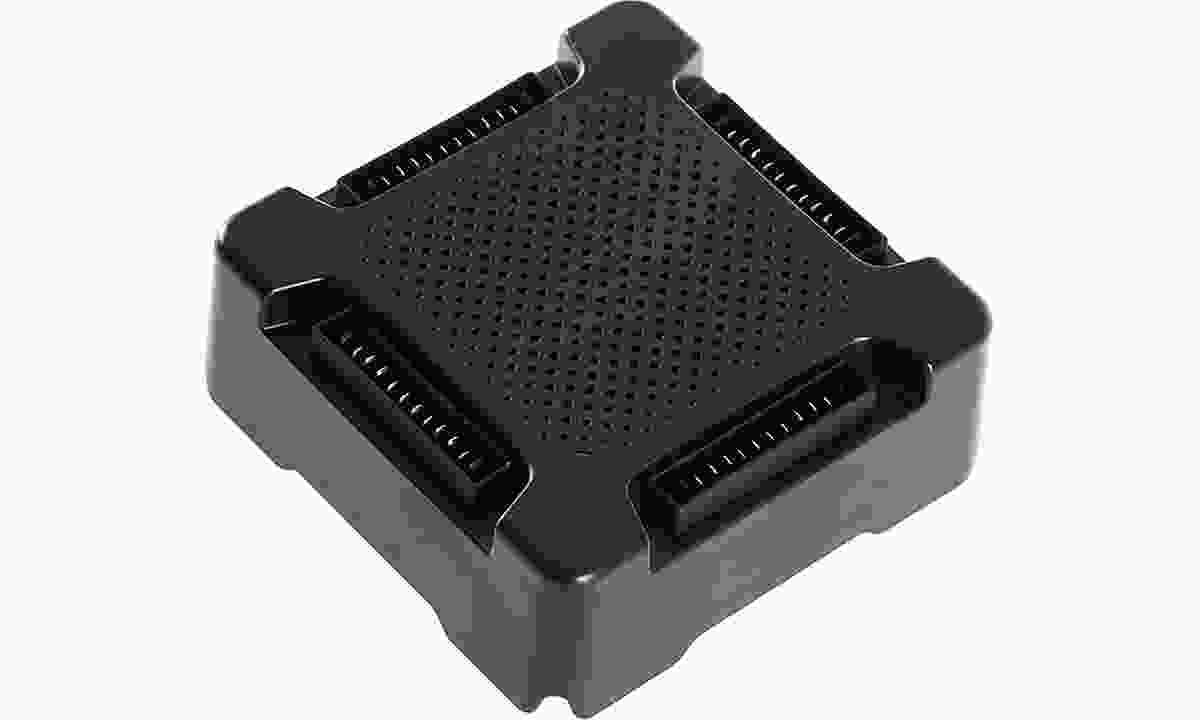 Battery life used to often be a problem for drone owners, when a dead battery would mean crashing out in mid-air. Today though, modern drones have a 'return to home' function, which means that when the battery level reaches 30%, you'll get a warning telling you to bring the drone back in. If you ignore the warning, eventually the drone will head back on its own to ensure it never crash lands. Having back up batteries is always advisable so you can stay out shooting photos or smooth video for longer.

4. Get qualified and stay legal 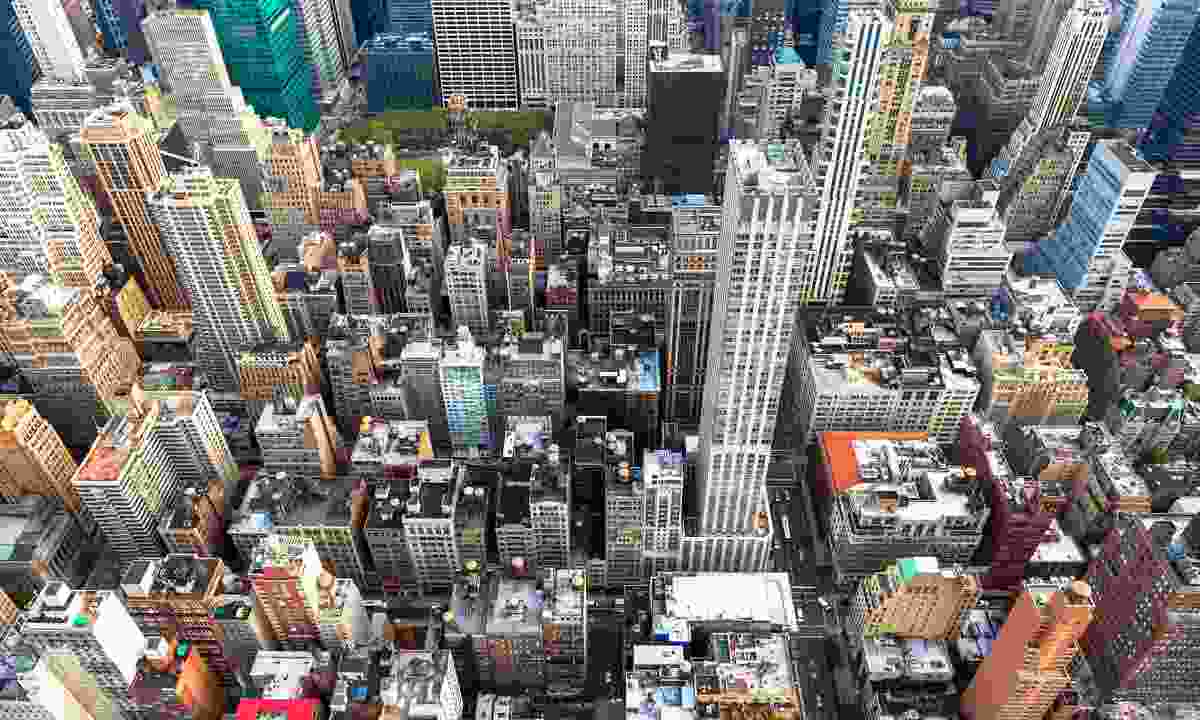 Unless you have a drone license, you're not allowed to fly within 150m of a congested area, such as New York City (Dreamstime)

If you're planning on using your drone strictly as a hobby, you technically don’t need a drone licence, providing you follow the Civil Aviation Authority regulations (you can read the full rules here). Some of the key ones to abide by include not flying your drone above 121m, not flying within 150m of a congested area (towns or cities) and not flying within 50m of people or property that are not under your control. 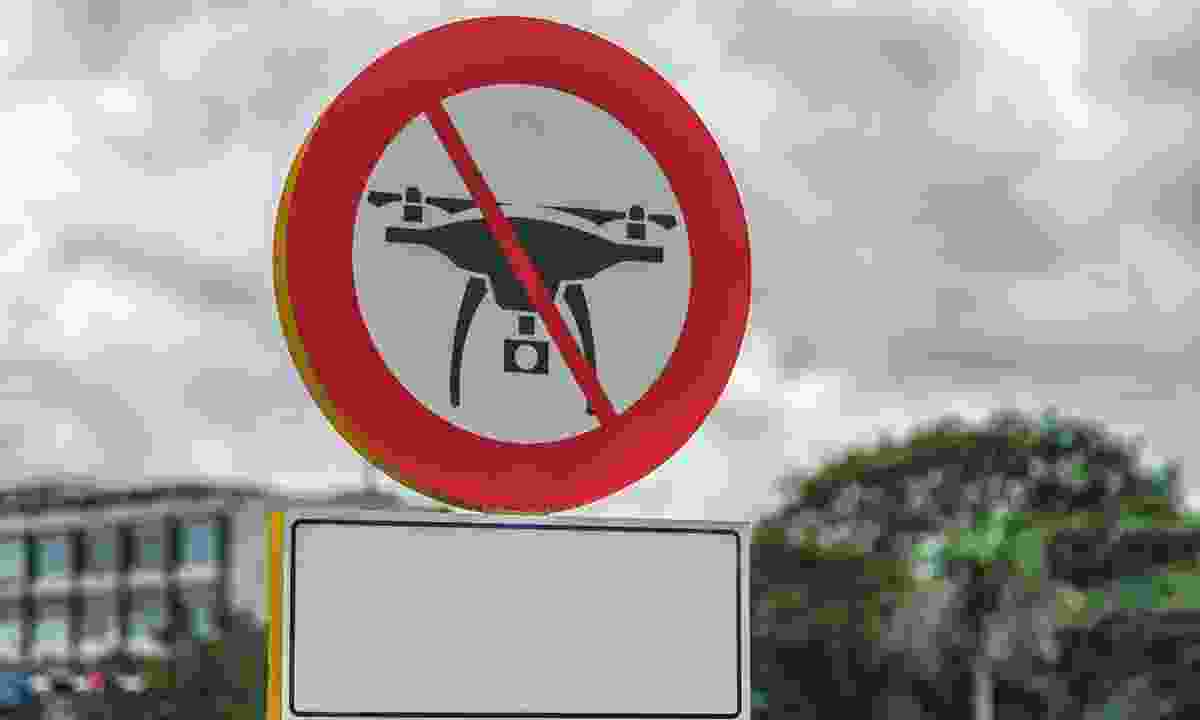 A 'no drones' sign on display in Cuba (Dreamstime)

If you are going to use the drone for any kind of commercial work, then you will need to gain your drone licence from the CAA (technically called ‘a permission’). Courses will cost around £1,000 and consist of a classroom/theory course followed by a practical flying exam.

Even if you have a license, you still cannot fly your drone in lots of places, including over National Parks, in the 4.5km exclusion zone around airports and over the Royal Parks in London. Different countries have different laws, so read up before taking your drone abroad. In some countries, such as Cuba or Morocco, drones are completely banned. 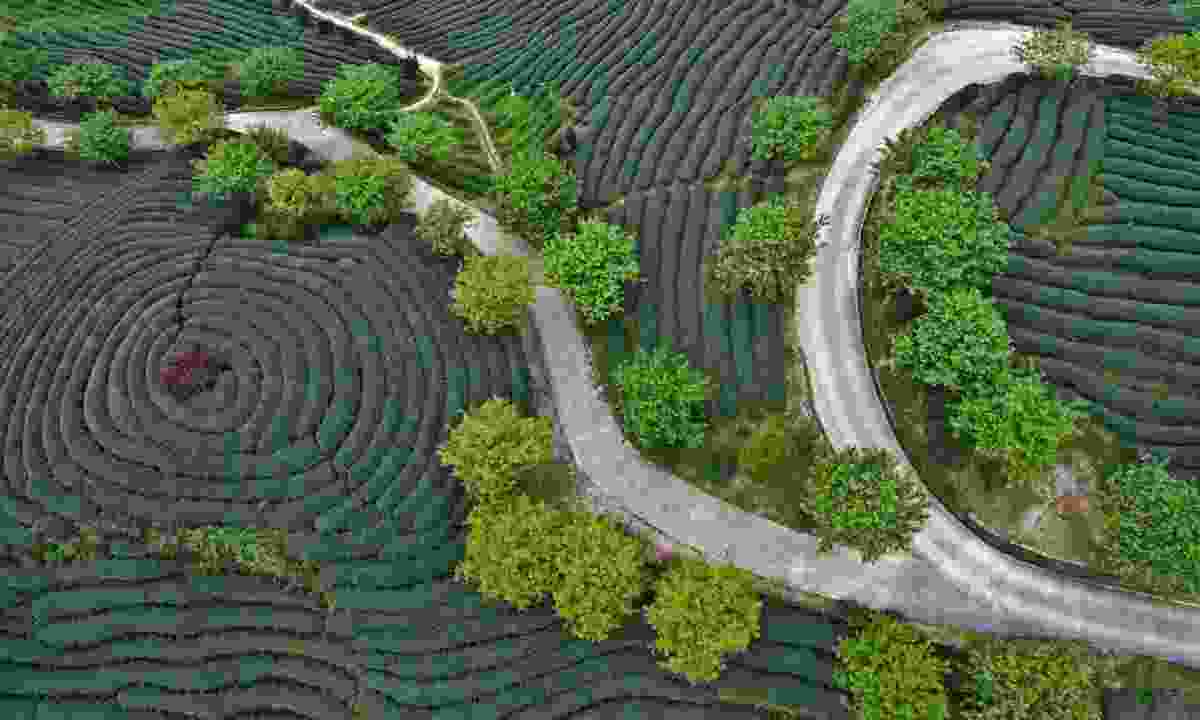 A fascinating photo of a road running through a farm, taken with a drone (Dreamstime)

The rise of drone technology is great for budding travel photographers and videographers, provided you know how to use your kit and you stay within the law. In fact, last year’s Wanderlust Travel Photo of the Year winner in the landscape category was shot with a drone, so we can certainly vouch for their effectiveness.

Drones aren’t cheap, so choose wisely and fly with care. And don’t forget that while they pack a powerful punch, they aren’t the only way to capture stunning travel pictures – though they do let you see the world in a way few other tools can. 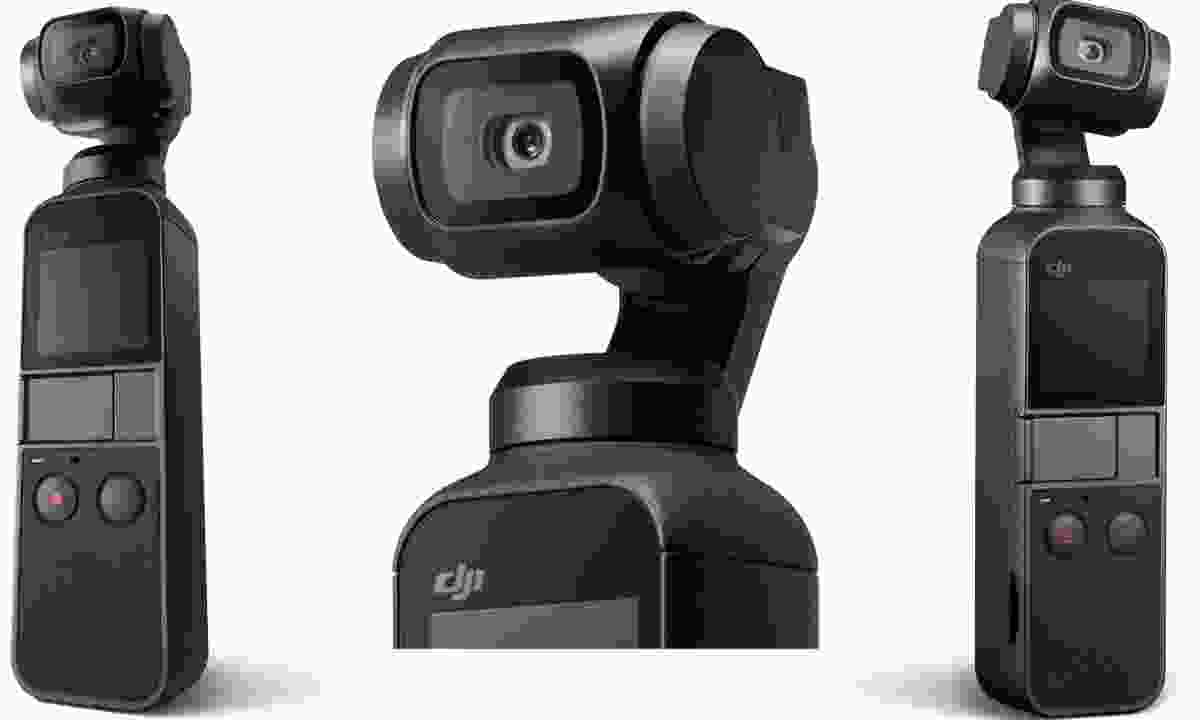 Still not convinced drones are for you? No problem. Here are two other cool pieces of photography gear that'll provide stunning pictures and smooth videos...

1. The Osmo Pocket  is a swanky new handheld camera from DJI that fits snugly in your jeans or coat . Its stabilised camera allows you to capture smooth 4K quality videos. It has an LCD touch screen, a 12 megapixel camera and a great time-lapse mode.

2. The new Osmo Action Camera has a screen on the front and back, so you can see what you’re shooting whatever angle you’re facing. It’s also waterproof up to 11m, great for shooting if you’re diving or snorkelling, or in snowy conditions like skiing and snowboarding.

We teamed up with Currys PC World to write this article. From now until July 2nd, they are offering a FREE £50 gift card from lastminute.com to use on your travels, when you buy any camera, camcorder or drone over £149 at Currys PC World.