11 things you have to see and do in Canberra

With a rich concentration of museums and galleries, fabulous gardens, cool restaurants and vibrant festivals, you'll need a good three days in Canberra, says Emma Gregg, to pack so much in... Set on a lakeshore peninsula, it’s arresting right from the start, its walls decorated with braille messages and QR codes.

Inside, it collates voices, stories, objects and theories relating to Australian identity, presenting them without judgement or prejudice. The museum contains so many artefacts that its displays represent a fraction of the whole, with hidden treasures, such as the Terence Lane Kangaroo Collection, detailed online. Consider booking their Ultimate Museum Experience package, which includes lunch overlooking Lake Burley Griffin and a tour of the museum, the expert guides bringing the objects to life. There’s more to Canberra’s dégustation dining scene than miniature portions with tiny dabs of sauce. Take trendy, lively Eightysix (eightysix.com.au), for example, an open-kitchen restaurant which hates to send anyone away hungry. Choose the A$86 ‘All you can eat’ option and you can tuck into as many full-size dishes as you like.

The ever-popular Akiba (akiba.com.au) makes it easy to try all the best bits of their pan-Asian menu. Say “Just feed me” and they’ll bring you eight favourite dishes for A$49.

On Saturdays, the Petit Feast brunch at Buvette (hotelrealm.com.au) is anything but small. Ask for a take-away box if you can’t polish it off at one sitting.

After all that eating, head to Canberra's uber cool Bar Rochford (barrochford.com), a wine and cocktail bar that was recently awarded Gourmet Traveller Australia's 2018 Bar of the Year award. Raise your glasses.

3: Get into Aboriginal and Torres Islander Art at the National Gallery of Australia 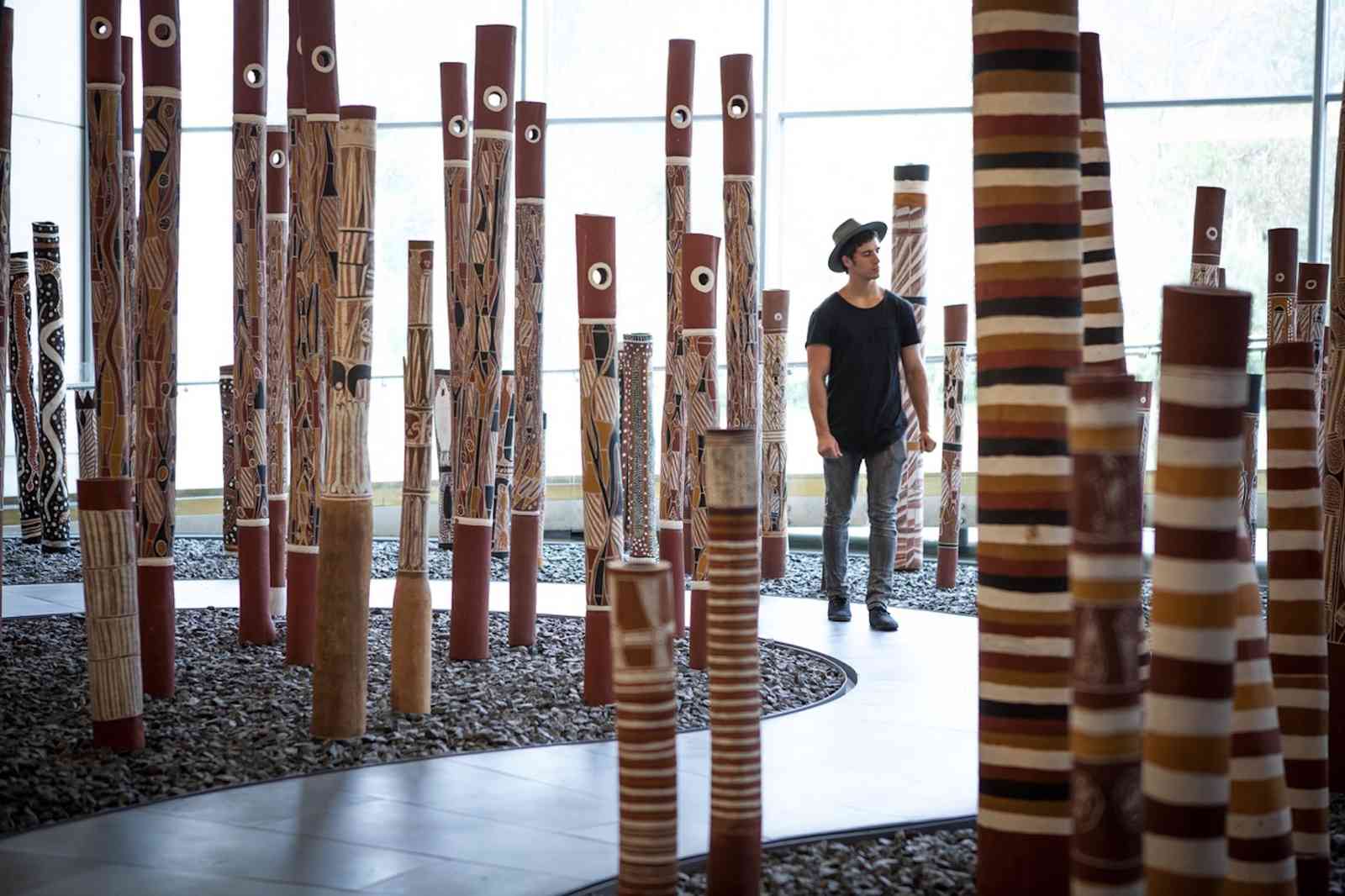 In a crisp 1970s concrete building full of raw, eye-catching right angles, the NGA (nga.gov.au) holds more than 166,000 works of art by international greats (think Monet, Hockney and Dalí) and Australian artists. Its powerful Aboriginal and Torres Strait Islander collection – the largest of its kind in Australia – is a genuine highlight.

The best-known installation, The Aboriginal Memorial, is a forest of log coffins hand-painted by a collective of Aboriginal artists from the Northern Territory.

Outside, venture into the Sculpture Garden, where you can find almost 30 works from
some of the best sculptors in Australia's recent history nestled among beautiful
gardens overlooking Lake Burley Griffin.

4: Catch one of Canberra’s signature festivals 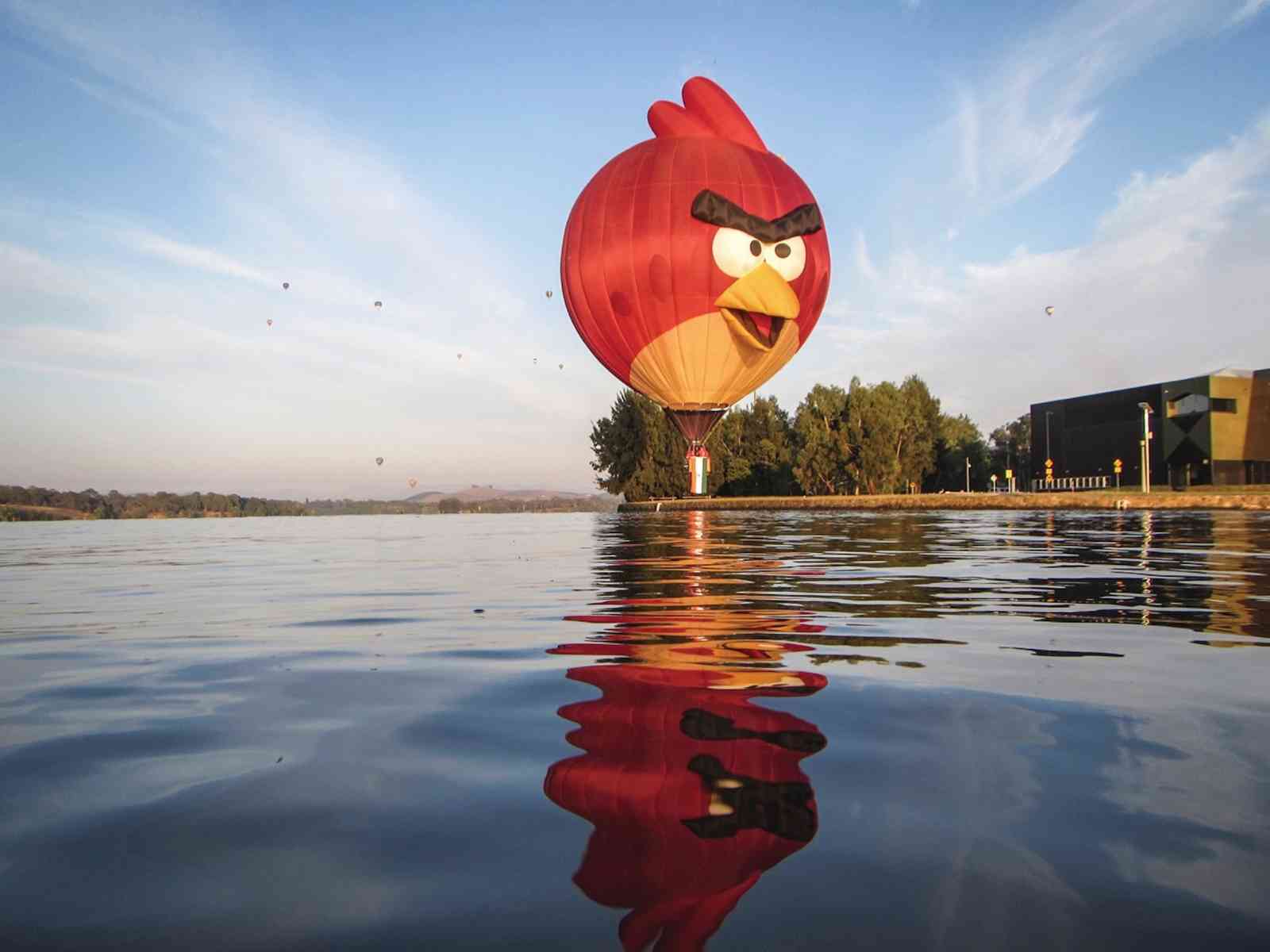 Canberra is as mad about sport as any other Australian city, but what really sets the capital apart is its superb calendar of cultural events. The best of them bombard the senses; Canberra’s dazzling displays of spring flowers, hot air balloons, light projections and fireworks are the spectacles that everyone wants to see.

It’s well worth timing your trip around Enlighten (enlightencanberra.com.au) and the Canberra Balloon Spectacular (events.act.gov.au) in March or Floriade (floriadeaustralia.com) from mid-September to mid-October. Just make sure you book your accommodation in advance. Low slung, light-filled and intriguingly multi-textured, the permanent home of Canberra’s NPG (portrait.gov.au) is less than a decade old. Its vivid collection of paintings, sculptures, photographs and videos, roughly 300 of which are on display at a time, honours around 2500 Australians, including the likes of Kylie Minogue and Dame Edna Everage, together with significant non-Australians, such as Captain James Cook and Queen Elizabeth II.

Like all the best portrait galleries, it’s intimate, eclectic and enjoyable on multiple levels, with a fascinating array of styles to appreciate.

6: Admire the machinery of democracy at Parliament House 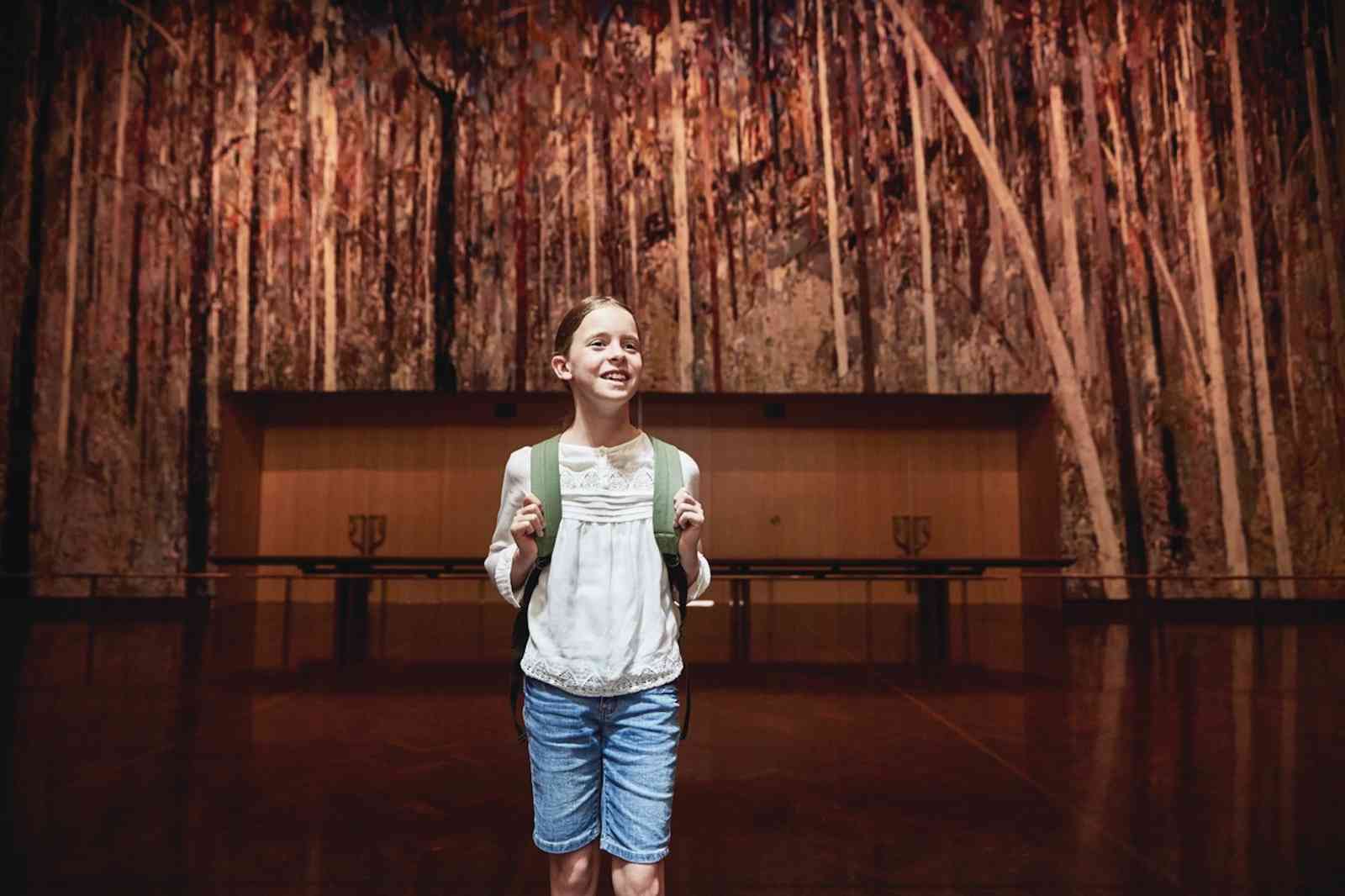 Shaped like two enormous boomerangs, powered by solar panels and built almost entirely of Australian materials, including timber, granite and marble, Canberra’s Parliament House (aph.gov.au) is one of the world’s most imaginative legislative buildings. Local designers Mitchell, Giurgola and Thorp won plaudits for their vision when it was inaugurated in 1988.

Visitors can take a tour, witness the cut and thrust of political debate from the public galleries, admire the Art Collection or relax on the turfed roof. 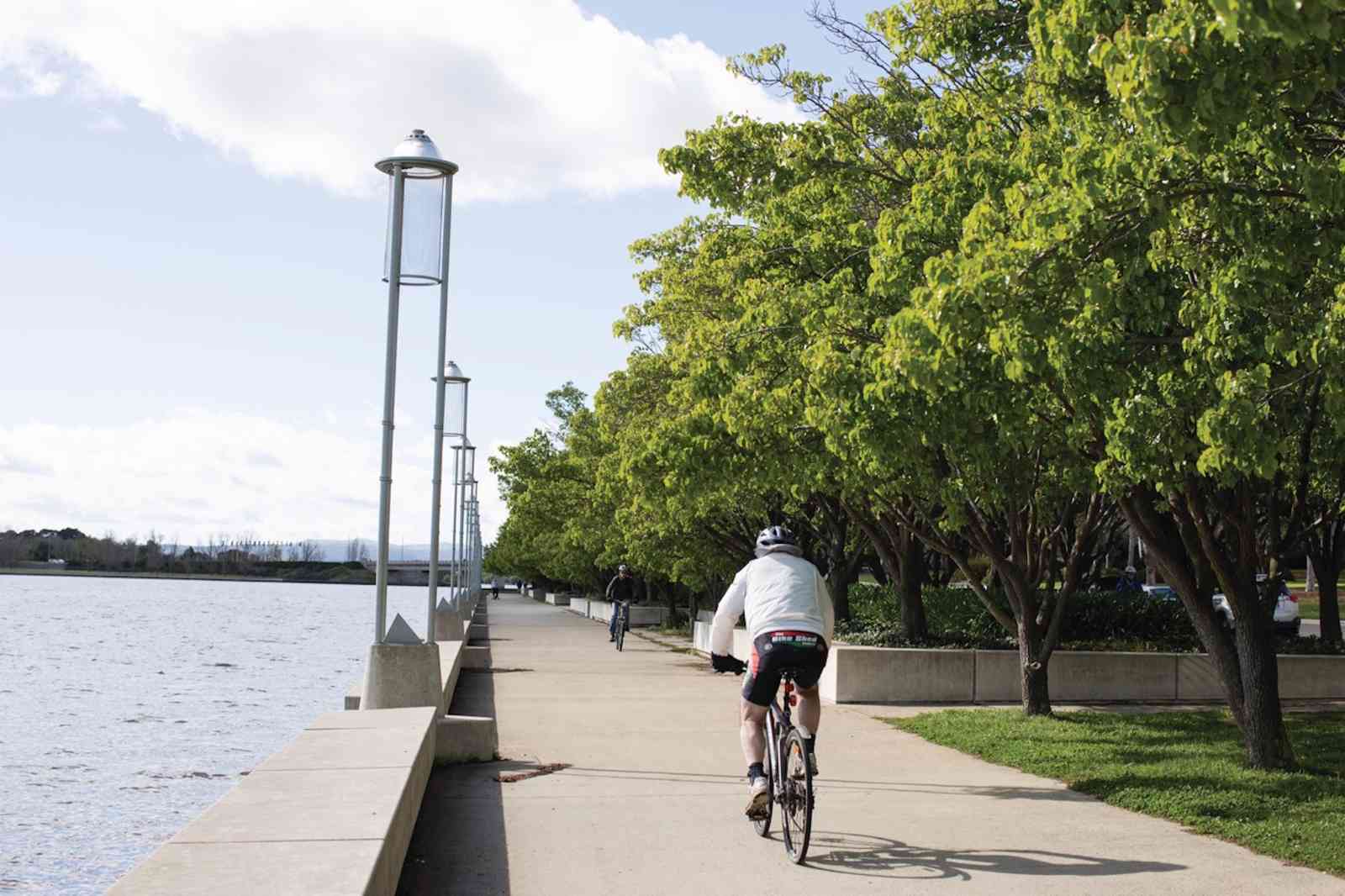 Whether you want to clock up some exercise or zip between museums, a bike ride along the waterside cycle paths in the heart of the city is an excellent way to enjoy the fresh air. There are three way-marked loops, ranging from 4.9km to 16km, which can be linked to create a 30km round-the-lake trip.

Spinway (spinwaycanberra.com.au) has bike-share ranks all over the city centre, while hire services, such as Cycle Canberra (cyclecanberra.com.au), will deliver direct to your hotel.

You can pick up VisitCanberra’s route map listing sights and pit stops from the Canberra and Region Visitors Centre, Regatta Point, or download it from visitcanberra.com.au.

8: Smell gum trees and spot a kangaroo in the Australian National Botanic Gardens 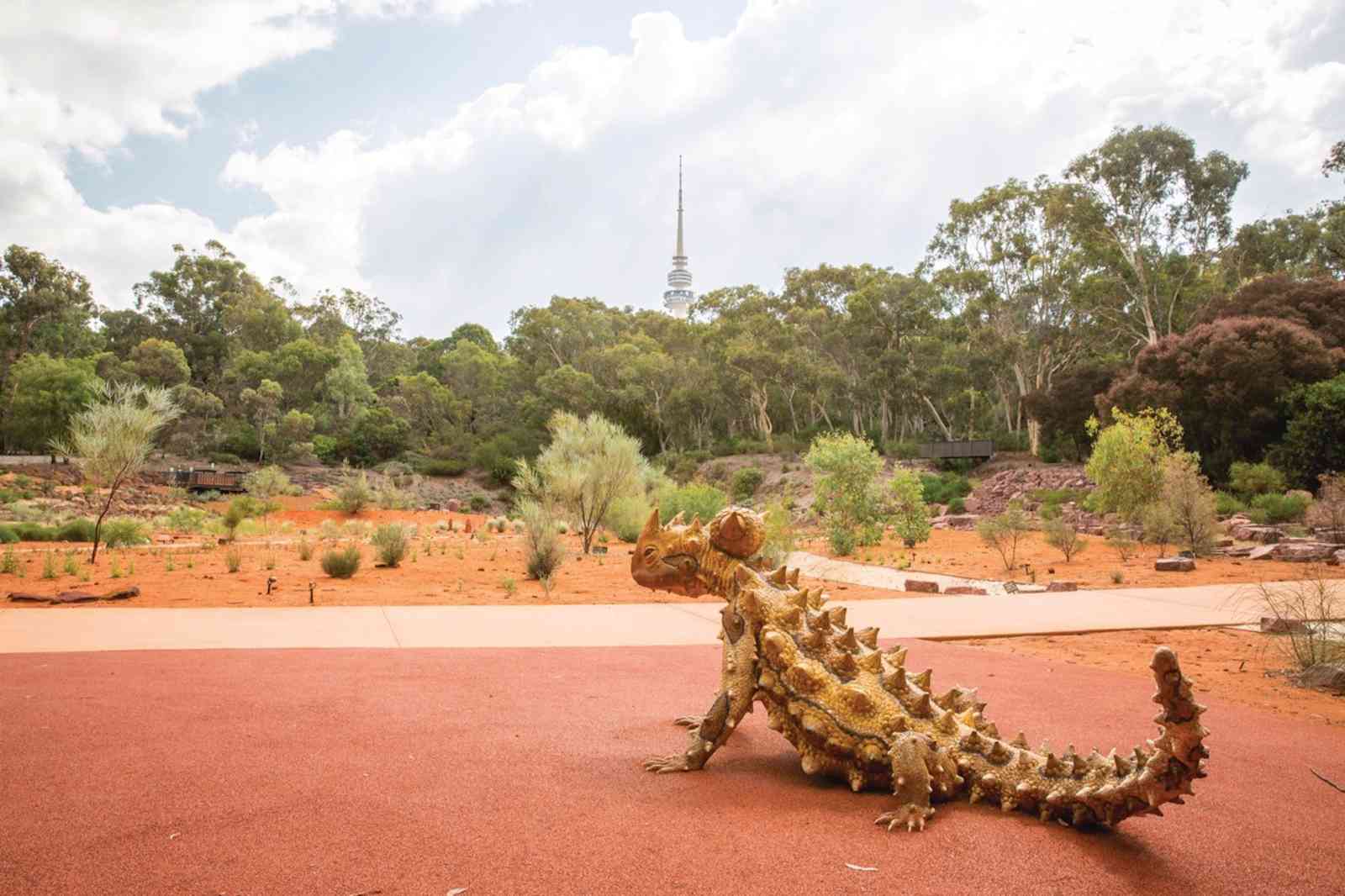 Canberra’s famous Botanic Gardens (anbg.gov.au) are as blessed with native plants as the city’s museums are with cultural artefacts. Over 6,300 plant species thrive here, including a propagated Wollemi pine, one of the world’s oldest and rarest species of tree.

Join a guided tour or simply stroll the walking trails at your own pace, admiring the giant ferns and scented trees. Close to the city centre, this green space is a haven for wildlife. Birds call from the branches and kangaroos graze in the quieter corners.

9: Design your own open-air sculpture tour 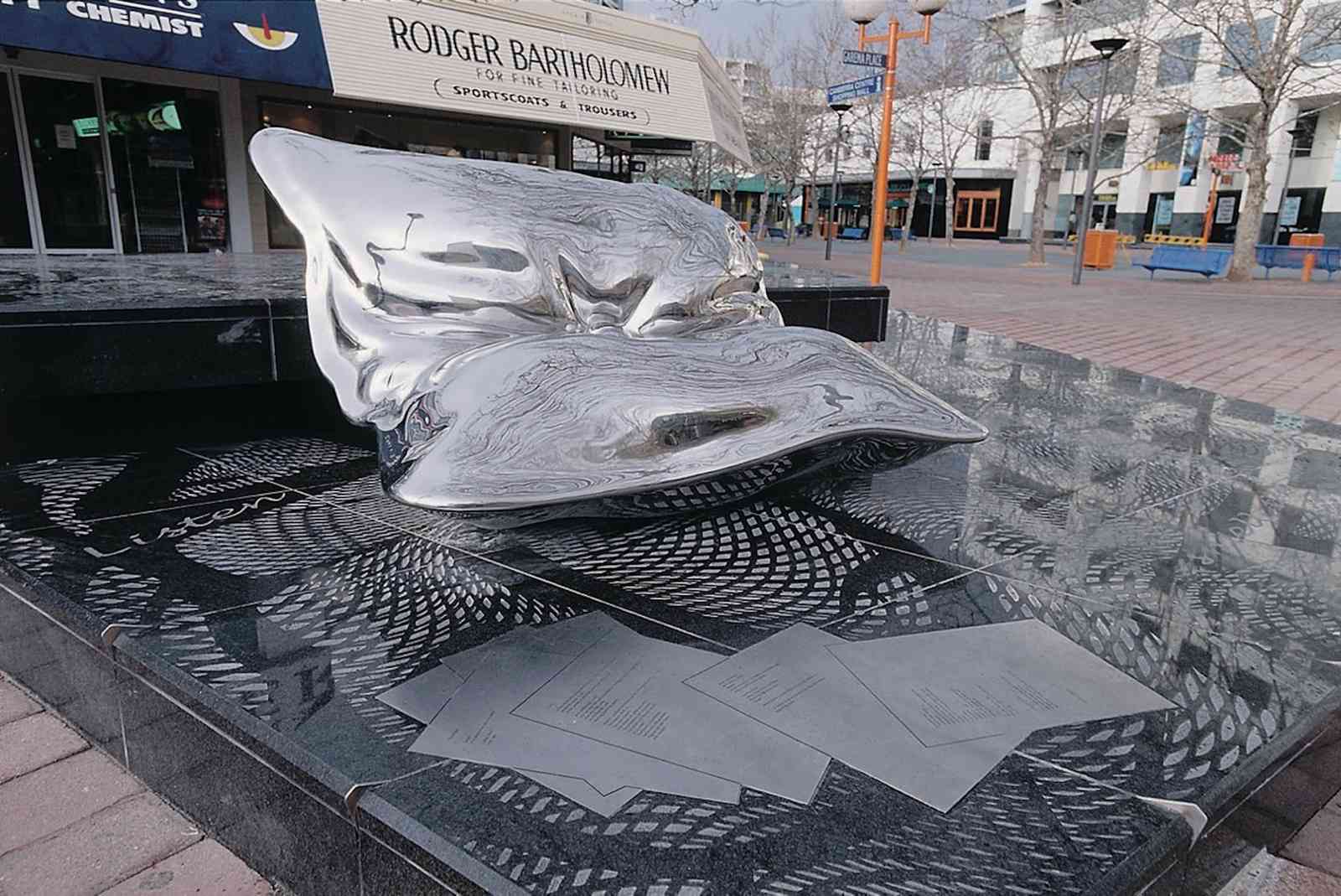 From an aluminium sheep in a barber’s chair and a flight of orange bogong moths to a huge tangle of iron girders representing native grasses, Canberra is liberally sprinkled with public art.

Of the city’s 140 or so commissioned outdoor pieces, over half are very central. You’ll find famous sculptures, such as Ainslie’s Sheep by Les Kossatz and Matthew Harding’s The Cushion on City Walk and Garema Place. It’s easy to plan a tour with the help of the city’s detailed online guide (arts.act.gov.au/public-art). 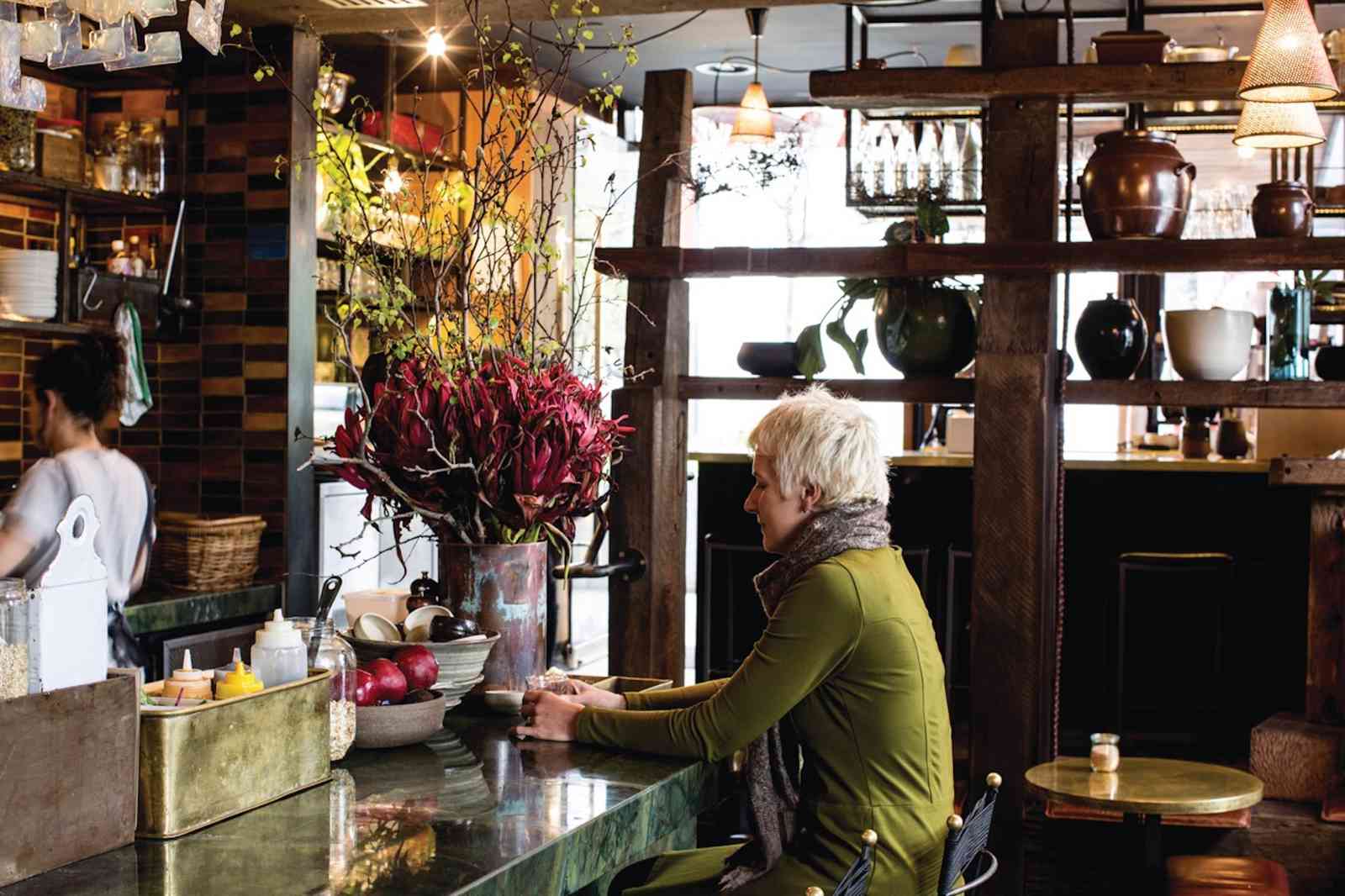 It’s a stimulating place to spend time, perhaps grabbing a fair trade coffee at Močan and Green Grout (mocanandgreengrout.com), an ethical café with upcycled décor and a handcrafted, retro-chic vibe, or indulging in a stylish lunch at Monster Kitchen and Bar (monsterkitchen.com.au) at Hotel Hotel, one of the city’s hippest hotels which serves witty, seasonal fare.

11: Pay your respects at the Australian War Memorial Tackling its solemn subject matter with courage and grace, the celebrated Australian War Memorial (awm.gov.au) in Canberra pays due respect to the armed forces and victims of conflict, while avoiding any temptation to glorify violence.

Bedecked with poppies, the Wall of Honour contains the names of more than 102,000 Australian servicemen and women who have lost their lives in battle, while, in the galleries of the war museum, dioramas and audiovisual reconstructions try to make sense of it all.

Time your visit to witness the moving Last Post Ceremony, held each day at 4.55pm.