Canada's Atlantic coast – just a five-and-a-half-hour flight from the UK – is a place of puffins, whales and coastal road trips. Discover the best things to do in this colourful corner of Canada...

The four provinces of Atlantic Canada – New Brunswick, Newfoundland & Labrador, Nova Scotia and Prince Edward Island – jut out into the alluring waves on Canada’s eastern shore. Just a five-and-a-half-hour flight from the UK, this region offers accessible coastal living at its finest. Roam between storybook lighthouses while watching out for whales, tap your feet along to lively Celtic folk music in a historic fishing village, or settle down beside a roaring fire for an all-you-can-eat seafood supper. There are lots of reasons for you to visit Atlantic Canada – here are seven of the best… 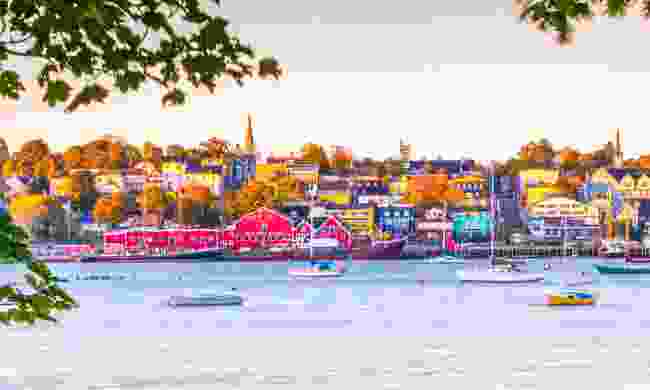 When it comes to the coast, Atlantic Canada does nothing by halves. Indeed, there is more than 43,000km of diverse coastline to explore. Take the Hopewell Rocks in New Brunswick, which feature among the provinces’ great sights. This collection of bizarre sandstone towers mushroom up from the ocean floor in the Bay of Fundy, before practically disappearing beneath the highest tides in the world. This means you can walk on the ocean floor at low tide, then kayak up to 50 feet higher on the same spot just six hours later. Visit at both high tide and low tide to truly appreciate the ocean’s magnitude.

Over in Newfoundland & Labrador, the fishing port of Twillingate is the gateway to the world-famous Iceberg Alley, a stretch of coast where cathedral-sized chunks of aquamarine ice drift lazily between May and early July. You can spend an afternoon soaking in their enormity from sea level in a boat or kayak, and your evening toasting them with beer brewed using the water from melted icebergs. To explore the best of Atlantic Canada’s seaside towns, check out this Enchanting Canadian Maritimes tour.

2. For puffins and whales 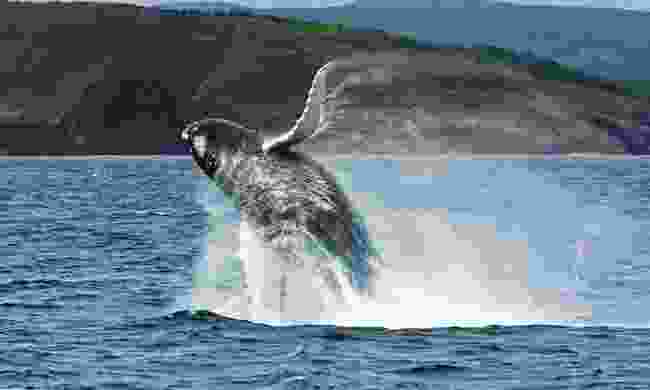 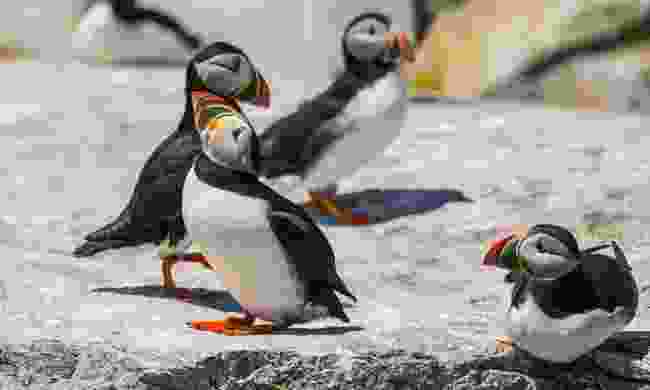 Much of the provinces’ wildlife congregates on the coast, whether it’s the whales cruising between its craggy bays, the puffins plucking herring from the waves or the polar bears riding in on icebergs from the north.

Some of the best whale watching can be found in the Bay of Fundy, as the world’s highest tides create rich feeding grounds for acrobatic humpbacks, pods of pilots and various other species, including the endangered North Atlantic Right whale, with only 400 remaining on the planet. Also keep an eye on the skies for the seabirds wheeling overhead, as it’s possible you’ll spot kittiwakes, petrels and cormorants, as well as swooping bald eagles.

Of course, you’ll find plenty of wildlife back on land, too. The alpine plateaus, glacial valleys and grassy lowlands of the national parks, such as the glacier-carved Gros Morne National Park – a UNESCO-site in Newfoundland & Labrador – provide a lush home for bears, moose, deer and enormous herds of caribou. Atlantic Canada almost redefines the meaning of fresh when it comes to its seafood, which can go from ocean to plate in a matter of hours. Its 43,000km of coast offer a mixed platter of briny morsels, ranging from mussels, scallops and crabs up to halibut, cod and salmon.

But if there’s one thing Atlantic Canada is known for, it’s lobster. In New Brunswick, lobster is a near-ubiquitous feature on restaurant menus, and you can learn all about how they’re caught on a lobster-themed cruise around Shediac Bay. Come dinner time, you’ll be able to tuck into one of your own directly on the boat.

The focus shifts to oysters on Prince Edward Island, where you can join local fishermen tonging and shucking them before enjoying an all-you-can-eat supper. For the full experience, visit in September to coincide with the PEI International Shellfish Festival. Festivals pack the calendars in Atlantic Canada, and many of them pay homage to the region’s colourful roots. Think fiddle playing, local food and vigorous jigs that’ll wear out the soles on your dancing shoes.

Over in Caraquet, in French-influenced New Brunswick, you’ll find the provinces’ most important Acadian festival, with a full programme of music and theatre spread across two weeks in August. The crowd favourite is the Grand Tintamarre on National Acadian Day, when revellers are invited to make as much noise as possible over the course of an hour – horns, bells and drums encouraged. 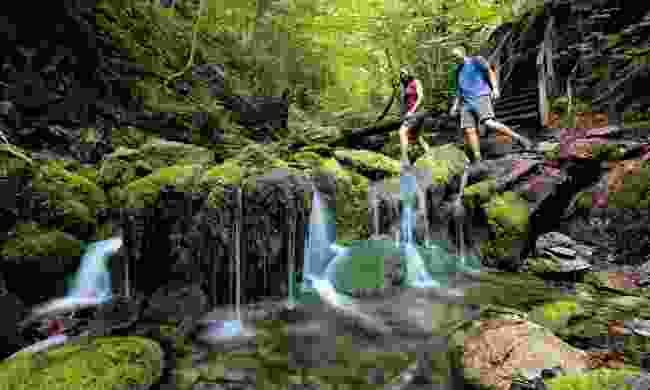 In all, there are nine national parks spread between the four provinces, where you can kayak between craggy coves, cycle through old-growth forests or practice yoga on a red-sand beach. But hiking is an almost essential activity here, as you’ll find picturesque trails right across the region.

In Nova Scotia’s Cape Breton Highlands National Park, the five-mile Skyline Trail is a local favourite, tracing a lofty route across a dramatic headland overlooking the ocean. If you keep an eye out from the viewing decks, it’s possible you’ll spot pods of whales.

For something more challenging, you can try a section of the East Coast Trail, a series of 26 long, hilly wilderness paths near St John’s, the technicolour capital of Newfoundland & Labrador. You’ll pass quaint fishing villages, puffin nests and sea arches, and – if you choose the Spout Path – a natural wave-driven geyser. A road through Cape Breton in Nova Scotia (Canada Sky)

Quiet coastal roads meandering between salt-tanged towns, pretty lighthouses and untouched beaches are an Atlantic Canada speciality, so it’s no surprise the region is perfect for a self-drive road trip.

The 185-mile Cabot Trail is one of Nova Scotia’s great routes, looping around a sizeable chunk of Cape Breton Island past colourful villages, hospitable inns and countless glorious coastal viewpoints. Keep an eye out for black bears, moose and bald eagles along the stretch beside the Gulf of St Lawrence.

Over on Prince Edward Island you’ll find a number of spectacular coastal drives through the landscapes that inspired the novel Anne of Green Gables. For a memorable picnic, stop off at PEI Preserve Company and stock up on homemade pies, cheese and jam – it’s just thirty minutes outside Charlottetown. 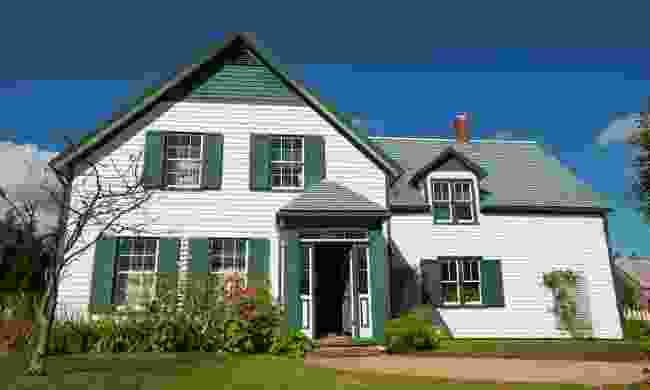 The Green Gables Heritage Place, set in the landscapes that inspired the Anne of Green Gables novels (Dreamstime)

For those interested in history, Atlantic Canada is peppered with historic sights, and one of the most notable can be found on Prince Edward Island in its eponymous national park. The Green Gables Heritage Place formed the inspiration for Lucy Maud Montgomery’s classic 1908 book Anne of Green Gables, a heart-warming tale of a plucky red-headed orphan. Fans of the novel shouldn’t miss a trip to the visitor centre, the final resting place of Montgomery’s original typewriter.

On Cape Breton Island in Nova Scotia, the laidback fishing village of Baddeck is home to the Alexander Graham Bell National Historic Site, where the inventor of the telephone chose to build his enormous estate beside Bras d’Or Lake. On a behind-the-scenes White Glove Tour, you can hold his notebook and many of his other former possessions.

With up to 77 Air Canada flights from London Heathrow to 7 airports in Canada and flights from Manchester, Glasgow and Edinburgh to Toronto during the summer, there is plenty of options for you to choose from when planning your Canada holiday. Discover the best of Canadian Sky’s Atlantic Canada holidays or visit canadiansky.co.uk for more information.