From medieval architecture and fascinating forts, to music events and street celebrations – Brittany has it all. Seek out its thrilling sights with a twist...

1: Walk the walls of Saint-Malo 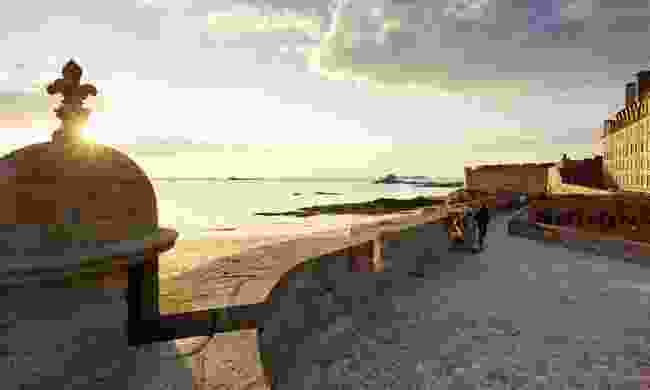 Enjoy coastal views on a stroll through Saint-Malo (Alexandre Lamoureux)

Even from the ferry, as it comes into port, Saint-Malo’s mighty remparts make for a striking sight, but nothing beats the experience of walking the centuries-old walls that encircle the old Corsair city. The two-kilometre loop takes you past eight gates, three posterns and three bastions and offers breathtaking views of the Emerald coast and the islands of Bé just off the coast. Within the walls, gaze down upon the stately granite façades of wealthy ship-owners’ mansions, where narrow cobbled streets weave between traditional creperies, kooky boutiques and welcoming bars. 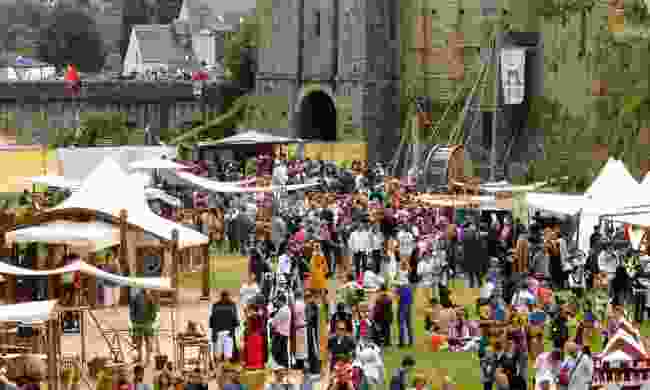 Saint-Malo isn’t the only town encompassed by impressive walls, Dinan too, has remparts that date from the Middle Ages, making them the oldest in Brittany. Start your walk at the 13th-century castle, home to the town museum, and then explore the town’s charming cobbled streets, with half-timbered buildings and then go down to the picturesque port for its restaurants and arts and crafts boutiques. Every July, the annual Fête des Remparts celebrates the town’s medieval heritage with a host of activities, from locals dressed period costume to jousting displays. 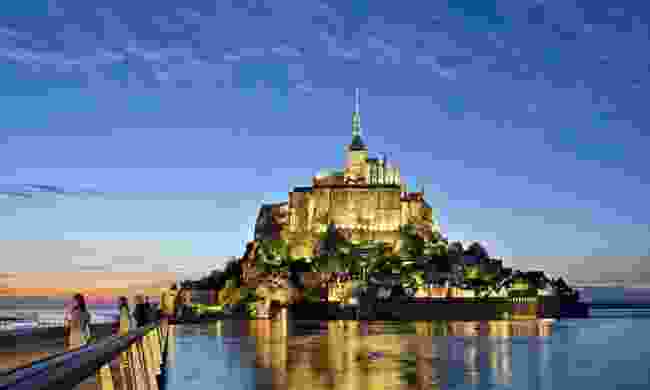 Claimed by both Brittany and Normandy, if Mont-Saint-Michel seems impressive by day, just wait until the sun sets over this iconic heritage site. With its twinkling lights reflecting on the sea at high tide, or on the gentle ripples of the sand at low tide, the monastery strikes a magical sight. In July and August, the experience is even further enhanced by the sound and light shows that take place throughout the village, the abbey and the ramparts of the island. If you want to explore further, take a twilight tour of the bay, followed by a night tour of the abbey, surely the most atmospheric time to be in this most peaceful setting.

4: Explore its other magnificent forts and castles 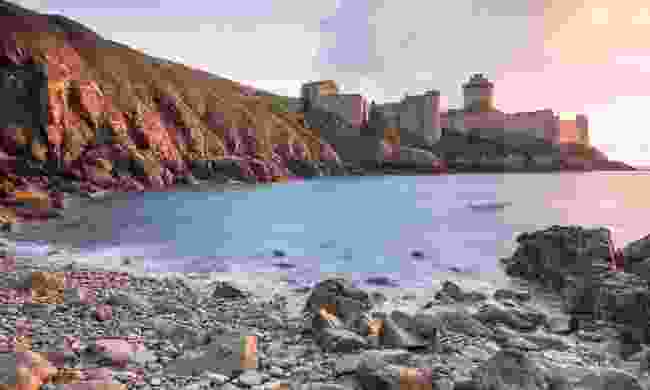 Time was, foreign visitors weren’t so welcome on the Breton coast, and the many castles and forts found throughout Brittany stand in testament to such times. Among the most impressive is Fort La Latte, a medieval fortress that occupies a narrow rocky promontory west of Saint-Malo. Set above the sea atop perilous cliffs, it ticks every box when it comes to castle wish-lists with its drawbridge, impregnable walls, its dungeons and weapons of war. Inland, in the depths of the Breton countryside, the La Hunaudaye Castle is equally impressive – its five crenelated towers, some ruined, are surrounded by a moat. Meanwhile, the Chateau de Josselin is a more refined affair, its turrets and towers overlooking manicured gardens and the River Oust.

5: Get ready to see Rennes 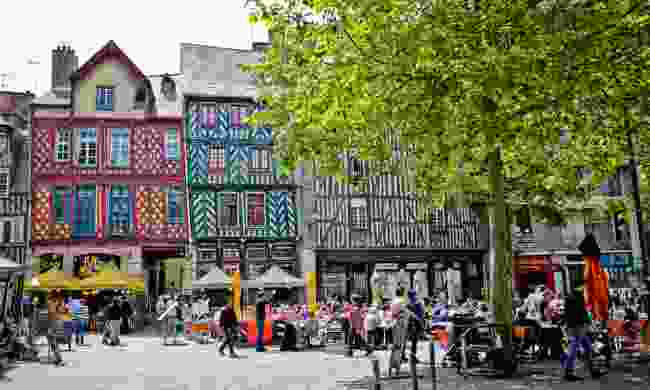 With its crooked and colourful timber-framed buildings and narrow cobbled streets, Rennes abounds with character, with stories from its fascinating past found around every corner. Make your first stop one of the city’s most vibrant streets – who could resist a drink on Rue de la Soif? Translated as ‘Drinkers’ Alley’, the 87-metre-long street has a bar every seven metres, and is a buzzing place to hang out, night or day. Cultural sights include the Fine Arts Museum (Musee des Beaux Arts), home to great works by such masters as Botticelli and Rembrandt and Picasso. Further arts can be found a more surprising venue – the Art Deco swimming pool, La Piscine Saint-Georges, which opened in 1926 and has a beautifully striking Art Deco façade and exquisite mosaics. Also take some time to see Rennes’ palatial 17th-century parliament building, as well as the remains of the city’s Gallo-Roman walls.

6: Get happy in Quimper 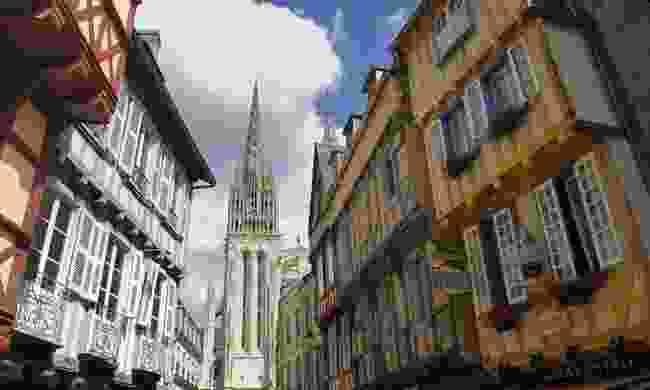 In the heart of the Finistère department in south-west Brittany, the charming city of Quimper (pronounced ‘kamp-air’) represents the very best of Breton culture. It is set on the confluence of two rivers – the Odet and the Steir – and overlooked by a glorious twin-spired Gothic cathedral that dates from the 12th century. Next to it, the Musée Départmental Breton displays Breton costumes and furniture. The streets of Quimper’s old town run between colourful timber-framed buildings, so explore the shops and then head up to Place au Beurre – ‘butter square’ – the perfect place to enjoy a traditional crêpe. And for the main Breton event, coincide your visit with the annual Festival le Cornouaille, which is dedicated to celebrating the Celtic character of the region. The event each summer sees a host of events including bagpipes, traditional jigs and a grand parade welcome some 250,000 visitors.

7: Take to festivals and events 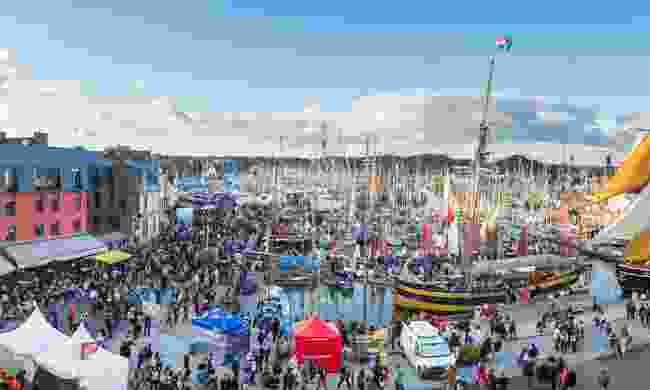 Film buffs, rock chicks and history-lovers need not look further than Brittany for their festival fixes; there’s something for everyone here. Each August, the American and British rock festival, La Route du Rock, takes place in Saint-Malo, with this year’s headline acts from Patti Smith and Grizzly Bear. If cinema is your raison d’etre, you will love the Fête du Film Britannique, the British Film festival which takes place in September in Dinard. The festival showcases the cinematic talents from Britain and rewards them with statues shaped like Alfred Hitchcock, the legendary film director who took cinematic inspiration from this area of Brittany. Later in the year, the Route du Rhum sees 100 solo sailors take to the stormy November seas for a 3,510-mile journey across the Atlantic to Guadeloupe in the Caribbean. The race takes place every four years and around 200,000 well-wishers come to wave them off.