With 23 cycling routes winding past castles, golden beaches, craggy peaks and charming towns, there's plenty of things to see and do on a cycling trip in glorious Carmarthenshire...

There’s a slice of south-west Wales that’s trailblazing adventurous travel with its brand new scenic cycling routes: Carmarthenshire. Too many visitors flock to the Brecon Beacons or dash straight to the Pembrokeshire coast, leaving this magical county’s undulating roads blissfully quiet. They’re missing a trick. These peaceful byways traverse spectacular landscapes, from the longest beach in Wales through bucolic valleys to craggy peaks and uplands, all studded with cycle-friendly accommodation, tempting cafés where you'll receive a warm croeso (welcome) from the locals and historic sites ranging from Roman gold mines to Norman castles and Georgian mansions. Now 23 routes, mapped out with full directions online, make it even easier to explore Carmarthenshire. Between the uplifting ascents and exhilarating downhills, make time to experience these 10 unmissable aspects of the county. 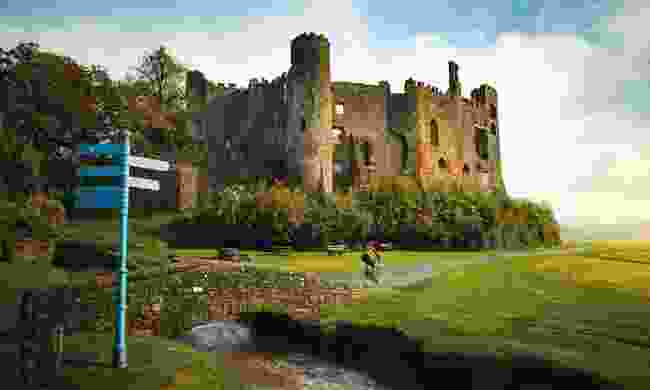 Carmarthenshire has an enviable castles-per-mile ratio, with an impressive array of medieval fortifications scattered across the county. Perched on a crag near Llandeilo is Dinefwr, stronghold of Lord Rhys, 12th-century ruler of the kingdom of Deheubarth. Llansteffan Castle stands stoically above Scott's Bay, providing dizzying views of the long stretch of golden sand beneath it. The mighty round towers of Kidwelly Castle (recognisable from the opening scene of Monty Python and the Holy Grail) are Norman constructions from the late 13th century, while perched on the edge of the Taf estuary is Laugharne, whose walls date from the same period and were enhanced in Tudor times. Most dramatic, though, is Carreg Cennen, its imposing ruins looming over the river Cennen from its craggy limestone eyrie. 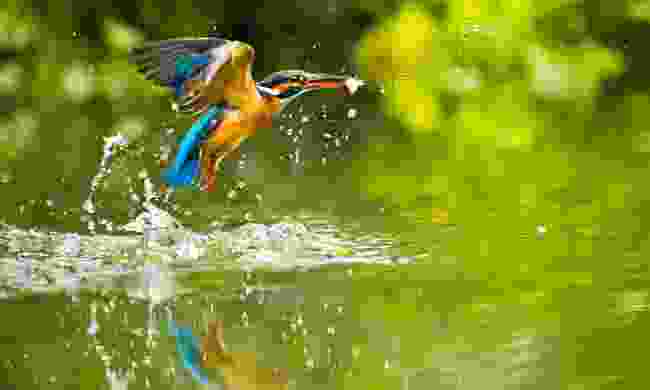 Spot kingfisher among other birds in Carmarthenshire (Shutterstock)

Wild encounters are never far away in this region, which is a treat for birdwatchers – be sure to pack binoculars. North of Llandovery, RSPB Gwenffrwd-Dinas is a magical reserve of alder and oak woodland, where flycatcher and redstarts flit and dippers forage the Towy River. The skies above Llanddeusant Red Kite Feeding Station swarm with those lithe birds of prey, while WWT Llanelli bustles with waterbirds. If plants are your thing, roam the themed areas of the National Botanic Garden of Wales (where you’ll also find the British Bird of Prey Centre) and the diverse lawns, cloisters and Asiatic gardens at Aberglasney.

3. Get your caffeine fix 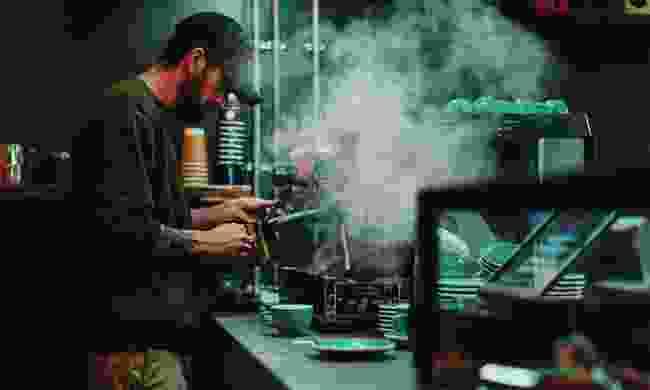 Enjoy a coffee at the award-winning Coaltown Coffee Roasters

There’s nothing cyclists like more than a pick-me-up cup – and Carmarthenshire’s roasters and baristas produce unbeatable coffee. Grab the best beans at source: multi-award-winning Coaltown Coffee Roasters in Ammanford – the Roastery just out of town has a canteen serving gourmet brunches, or stop for a shot at the central Espresso Bar. Elsewhere, The Hangout in Llandeilo was named the best café in Wales in 2019, and Bean on a Bike in Cross Hands bakes cakes to fuel the toughest ascent. In short, you’re never far from a caffeine fix and your dewsh (visit) will be warmly received by the friendly barristers. 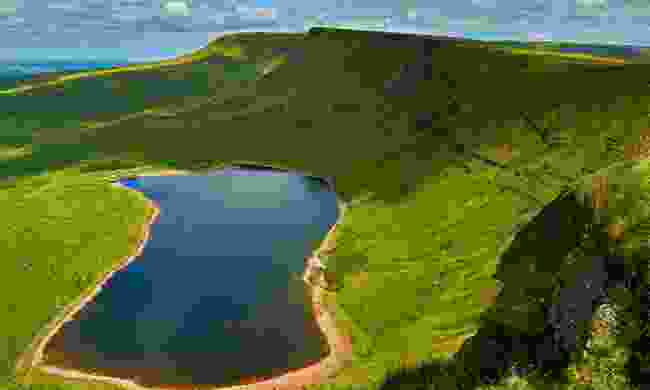 Carmarthenshire’s not all about the bikes – there’s a range of adventures to enjoy out of the saddle too. Some of the finest (and quietest) hiking trails in the Brecon Beacons traverse the county – our pick is the loop around the sheer Carmarthen Fan, affording birds’-eye views of myth-soaked Llyn y Fan Fach lake. Alternatively, use the Heart of Wales train line to access a series of walks across the county, now linked by a long-distance path. Several stables offer horseriding, while the Teifi River draws water babies with memorable canoeing, rafting and SUPing.

5. Drink in the views 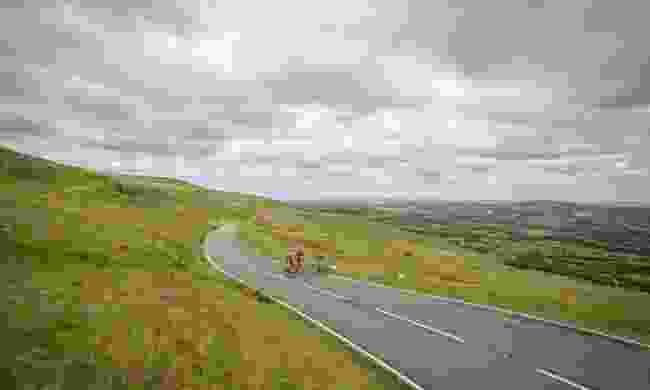 Enjoy spectacular views from the top of Black Mountain

Bike rides in Carmarthenshire tend to be long – more because of countless photo stops than challenging ascents. As well as the historic sites, pretty towns and golden beaches, countless other vistas will have you reaching for your camera or phone while you pedal. The area around the wooded banks of Llyn Brianne reservoir, for example, has been dubbed ‘Little Switzerland’ for its wild beauty. Near Llandovery, Cwm Rhaeadr (‘Valley of the Waterfalls’) is well-named, with cataracts forging over mossy rocks in a forest that’s at its fiery best in autumn. And the switchback climb up Y Mynydd Ddu/Black Mountain rewards with dramatic views to far north and south. 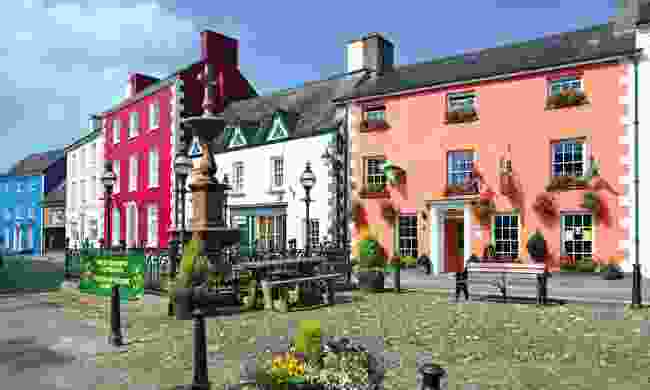 Settlements across the county have their own distinctive appeal, not least a roster of cyclist-savvy eateries. Carmarthen itself, founded by the Romans and reputed birthplace of the Arthurian wizard Merlin, is a buzzing burg where you can make out the remains of an ancient amphitheatre. The old drovers’ centre of Llandovery, a handy base for roaming northern Carmarthenshire, is guarded by a dramatic castle and packed with alluring pubs and cafés where you'll hear the Welsh language being spoken. Colourful houses tumble down the hillside at Llandeilo, which has made a name for itself as a gourmet hub – don’t miss aptly named Heavenly for chocolate, cakes and ice cream. And in characterful waterfront Laugharne, you can sip a pint in Brown’s Hotel, Dylan Thomas’s favoured spot for ‘mouldering’ and musing. 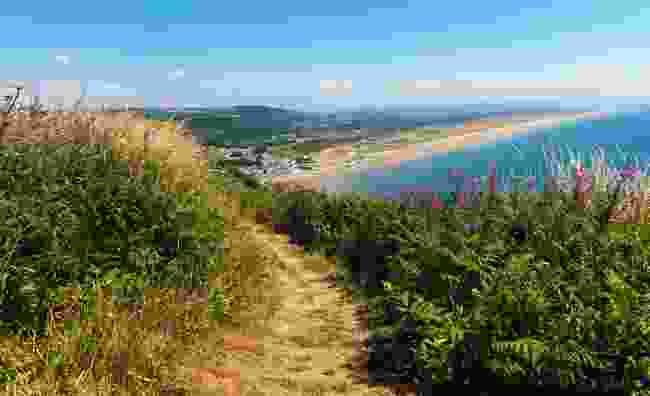 The longest beach in Wales stretches for 13km along Carmarthen Bay: Cefn Sidan, backed by tufted dunes and the attractions of Pembrey Country Park. This broad, peaceful strand is a fine spot for swimming and sandcastle-building, and you might even spot shipwrecks at low tide. To the west, Pendine Sands is almost as long, while the cockle-shell-speckled beach at Llansteffan on the Towy estuary is guarded by the romantic ruins of a 12th-century castle. 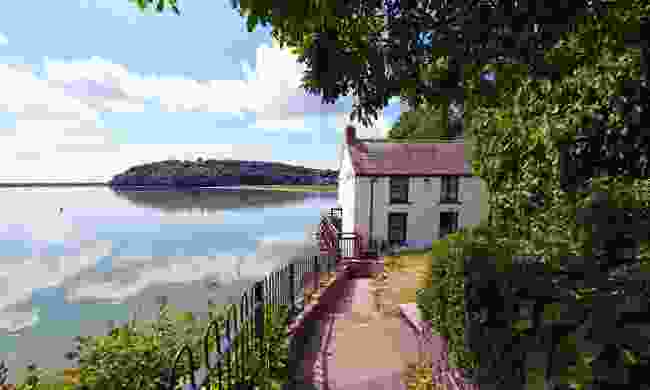 Visit the home of Dylan Thomas, the Boathouse

The county’s heritage stretches back to long before those inveterate castle-creaters were active. Nearly a millennium ago, Romans dug for mineral wealth at Dolaucothi, and today you can explore their goldmines. In Whitland, visit the Hywel Dda Centre to learn about the exploits of that 10th-century Welsh king, and at Talley roam the evocative ruins of the medieval abbey of the Premonstratensians or White Canons. Llanelli boasts Wales’s finest Georgian building, Plas Llanelly, while in Laugharne, the Dylan Thomas trail visits his erstwhile home, the Boathouse, now a museum encompassing the writing shed where he penned many of his most famous works. 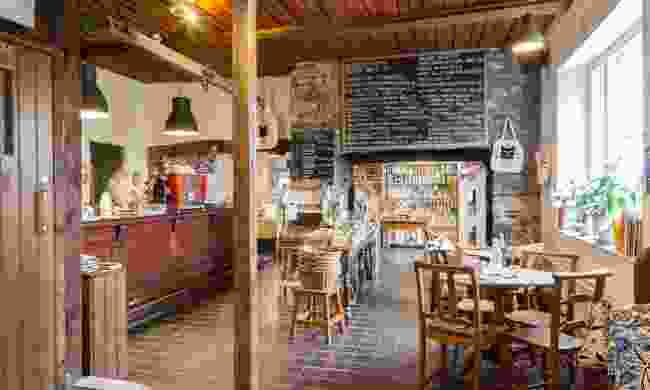 Carmarthenshire works up a wonderful appetite – and affords ample places in which to satisfy it. Cyclists relish a string of delis along the mapped routes, perfect for creating gourmet picnics: try Wright’s Food Emporium at Llanarthne, Ty Croeso in Newcastle Emlyn and Ginhaus Deli in Llandeilo, famed for its local cheeses, charcuterie – and, yes, gin. But there’s also more substantial and sophisticated fare for evening celebrations: St Elli’s Bay offers bistro dishes and dramatic views of Carmarthen Bay, while in Laugharne, the menu at Penderyn aptly showcases fish and seafood. 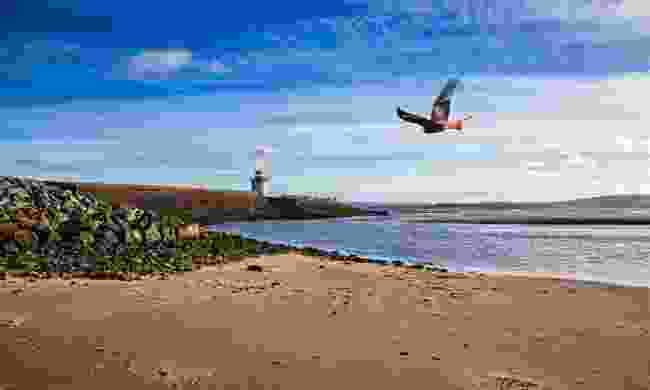 While Carmarthenshire’s rolling backroads represent the big draw for many cyclists, there are ample opportunities to enjoy a break from the tarmac. The car-free Millennium Coastal Trail leads west from Llanelli to Pembrey Country Park, laced with paths and hosting the National Closed Road Cycling Circuit, where you can pit yourself against the clock – as you can at Carmarthen’s Velodrome, one of the world’s oldest. And for something more gnarly, head to Brechfa Forest, where a network of off-road trails get the adrenaline pumping for mountain-bikers. 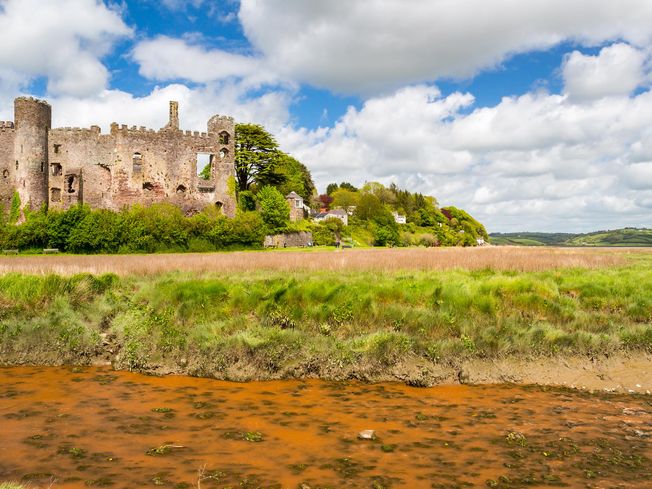 Head over to the Carmarthenshire website and start planning your cycling holioday now. You will find all the information you need to know about what to see and do and where to stay, eat and visit. You will also find all the details on the 23 cycling routes, including detailed maps.