10 delicious and unique foods you must try in Catalonia

Catalonia has its own, distinct culinary traditions. We show you the top 10 foods to try on any trip to Barcelona or beyond

Catalan food tends to be simple, seasonal and unpretentious. It’s all about letting good quality ingredients do the talking. Fish is often served with nothing more than a thrust of lemon juice and plenty of salt, unhampered by herbs or creamy sauces.

Catalans eat most at lunch and a three course menú del día will rarely cost the earth.

A word of warning: Catalans eat dinner late. If you’re looking for a convivial atmosphere, don’t even think about having dinner before 9pm.

Botifarra or Catalan sausage, is ubiquitous in all of Catalonia but especially so in the mountains and the area around Vic. Typically accompanied by white beans (mongetes), this long, highly-seasoned pork sausage is usually grilled and served without fanfare.

If you find yourself in the area around Olot, look out for the fesols de Santa Pau, a slightly smaller type of white beans that are highly-prized.

Calçots, a type of mild scallion or green onion, are unique to Catalonia. In the cold winter months of January and February, Catalans get together in country houses, restaurants and around barbeque pits for a calçotada. The calçots are thrown onto the barbeque whole until charred and black, and then served with a garlicky almond and pepper sauce called romesco.

Diners pop on a bib, strip off the outer leaves and dunk the calçots into the sauce before lowering it into their mouths from above. Typically, they are washed down with plenty of red wine and followed by barbequed meat or sausage. It’s a gloriously, messy business and great fun.

Autumn is the time when Catalans excitedly take to the countryside to hunt for wild mushrooms and there are few better ways to enjoy these earthy delights than in this dish. Finely cut veal is stewed in a rich stock of red wine and tomatoes along with whatever has been foraged. Just before the end, the picada is added. A stalwart of Catalan cooking, picada is a mix of breadcrumbs, toasted almonds, saffron, parsley and oil, and is used to thicken and blend the meat juices and round off the flavours. 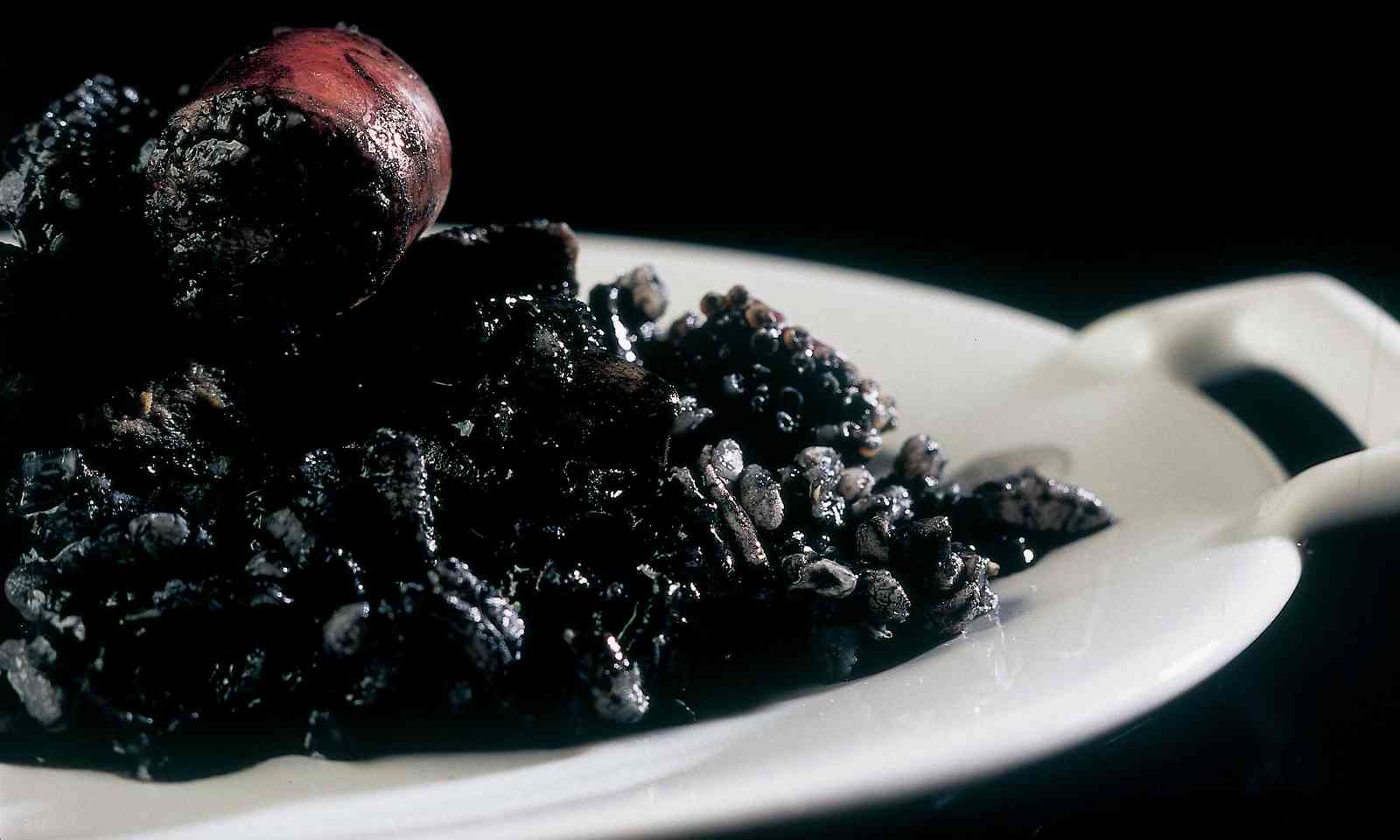 Catalans and Valencians from further down the coast quibble over the origins of arròs negre and understandably so; it’s too good not to squabble over. Made with cuttlefish, white rice, green peppers, garlic and sometimes mussels or fat prawns in their shells, this is basically paella with the added ooh-la-la and foodie credits of squid ink.

Black as a coal face, the squid ink enhances the fishy goodness of the broth the rice is cooked in and ensures that when the time comes to dig out the last bits of any shellfish with your fingers, you’re going to need a lot of extra serviettes to clean up afterwards.

Look out too for Fideuà negra, a delicious variation made with short pasta noodles instead of rice, which is served with generous spoonfuls of thick, garlicky aioli.

There are a wealth of dishes in Catalan cuisine that combine the flavours of the sea and the mountains but this is the tastiest. Meatballs swim in a rich stew with melt-in-the-mouth strips of cuttlefish and peas, seasoned with picada. Mop up the juices with hunks of crusty bread.

Summers can be sweltering in Catalonia, especially by the coast. This traditional salad bursts with flavour and can be just the ticket on a hot day.

Salt cod is shredded with the fingers (the Catalan verb esqueixar means to tear) and mixed with firm, fresh tomatoes, onions, black olives and colourful peppers. Olive oil vinaigrette finishes it all off. 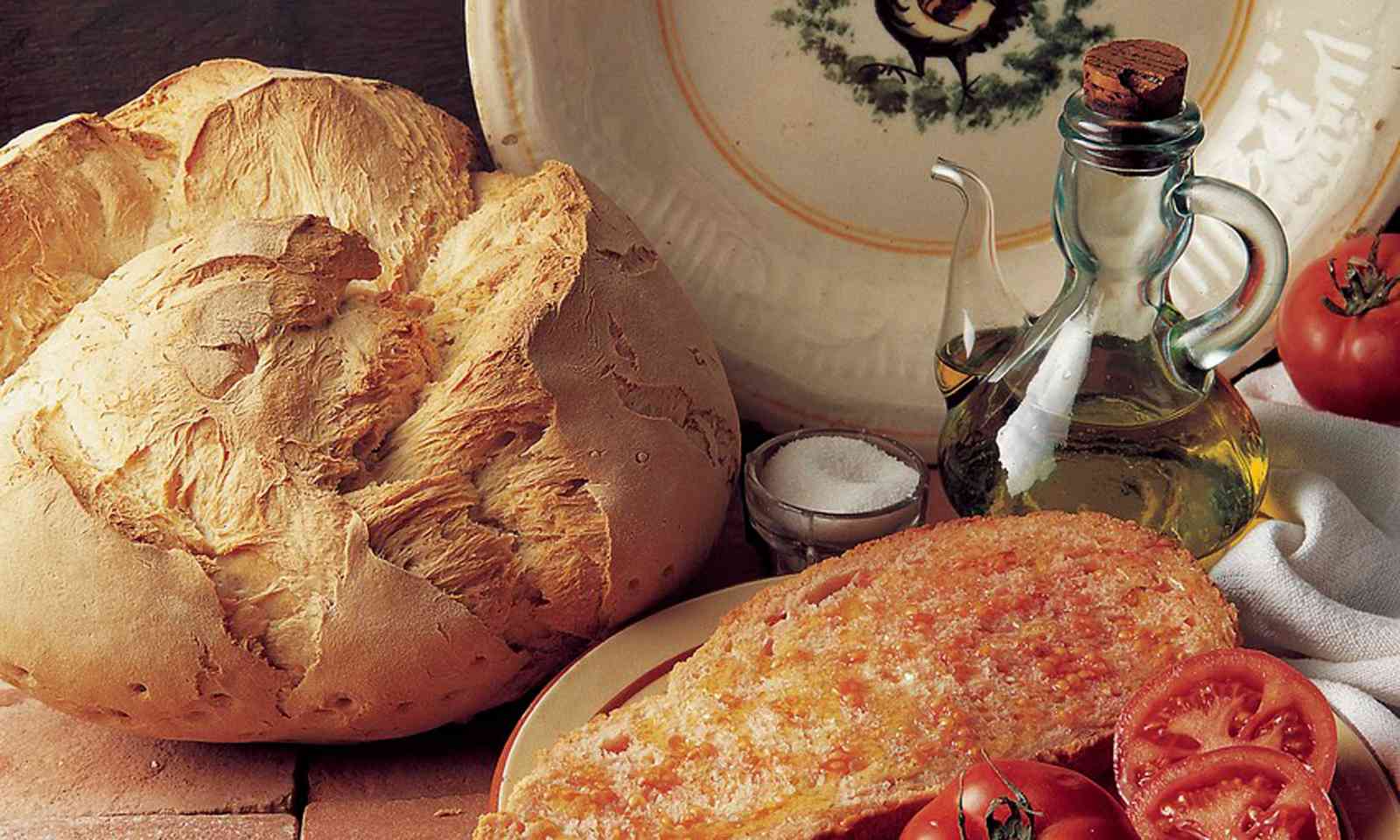 Bread is as essential as breathing to most Catalans and pa amb tomàquet (bread rubbed with tomato) is a source of great national pride. Once merely a way of jazzing up stale bread, pa amb tomàquet done well is a thing of beauty. Barely a mealtime goes by without it and it will always be served with some kind of grilled meat. While you can find pa amb tomàquet in other parts of Spain, Catalans will tell you that theirs is unique.

Purists will fuss over the finer details but thickly cut slices of pa de pagès (a rustic, crusty bread) and squidgy ripe tomatoes are essential to the mix. Pa amb tomàquet can come out of the kitchen ready-prepared but in more traditional places, especially in the mountains, expect a Do-It-Yourself ensemble of toasted bread, tomato and garlic. To pass as a local, cut the tomato in half horizontally through the middle. Start by rubbing a cut garlic clove over the toast before doing the same with the tomato, then drizzle with olive oil and a good sprinkle of salt, and tuck in. 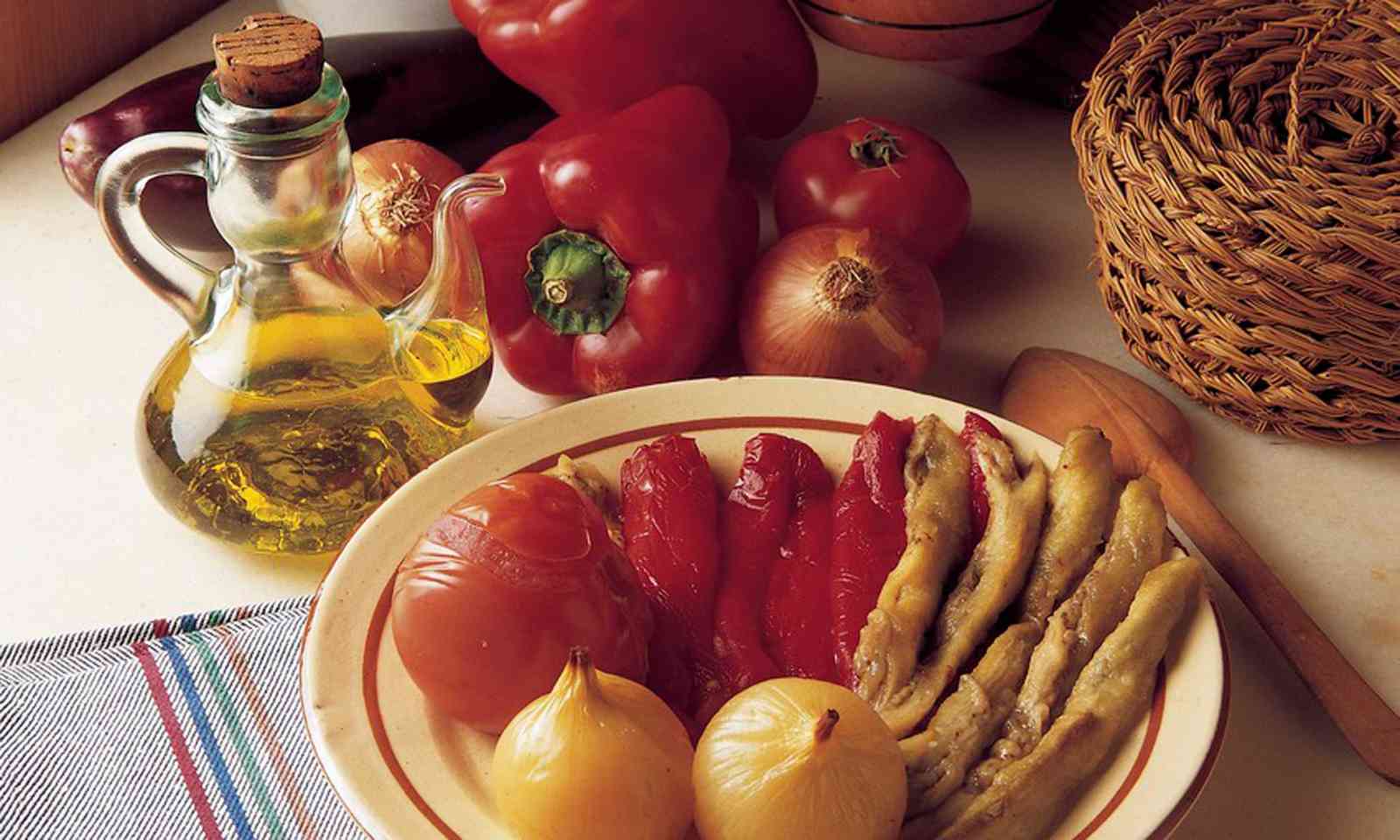 In a region known for its pork products and seafood, locals are sometimes bewildered by vegetarians who don’t partake. Meat lurks inside almost all of Catalonia’s cheap and nutritious lentil and bean mains, and even a vegetal baguette is likely to include tuna or chicken. When you’re sick of truita de patates (potato omelette), escalivada will save you.

Escalivada takes two basic ingredients and makes them sing. Aubergines and red peppers are left to char over a barbeque grill, then the silky insides are scooped out in all their smoky goodness and dressed with garlic, salt and generous glugs of olive oil. It’s usually served with pa amb tomàquet or on coca, a flat bread similar to a crusty pizza base. When the peppers and aubergines are in season, it can take your breath away.

Mel i Mato is no less modest but it’s as Catalan as it gets and can be just what you need after a heavy main. Mato is a type of fresh unsalted cheese, similar in texture to riccotta but with a milder flavour. The soft, creamy cheese is drizzled with local honey and often served with walnuts for a bit of crunch. It’s simple, tasty and guilt-free.

High in calories, this flat puff pastry cake is made with eggs, sugar, crushed pork crackling and anise, before being liberally sprinkled with pine nuts. Usually accompanied by a glass or two of local cava, it typically starts to appear in bakeries around Carnival time in February, in the run up to Easter and alongside Coca de Sant Joan on June 23.

Hunt the cake out after a long afternoon of sightseeing to keep you going until dinner after the sun goes down.

This article was supported by the Catalonia Tourist Board but it is impartial and independent, just like all Wanderlust editorial.