From coastal paths to rugged mountain trails, there are plenty of fantastic options for one-day hikes in Catalonia to fill your lungs with air and work off a few tapas plates too many Follow in the footsteps of mule drivers, militia and highwaymen across the Serra de Cadí mountains to reach the Pyrenean town of Bellver de Cerdanya. This moderate, eight-hour hike winds uphill through forest and over the 2,430m Gosolans pass, rewarding your efforts with striking views of the Cadí range’s sheer rock walls.

There’s culture too: Pablo Picasso once walked these parts, and paused to paint at the village of Gósol, which is now home to a Picasso Museum. 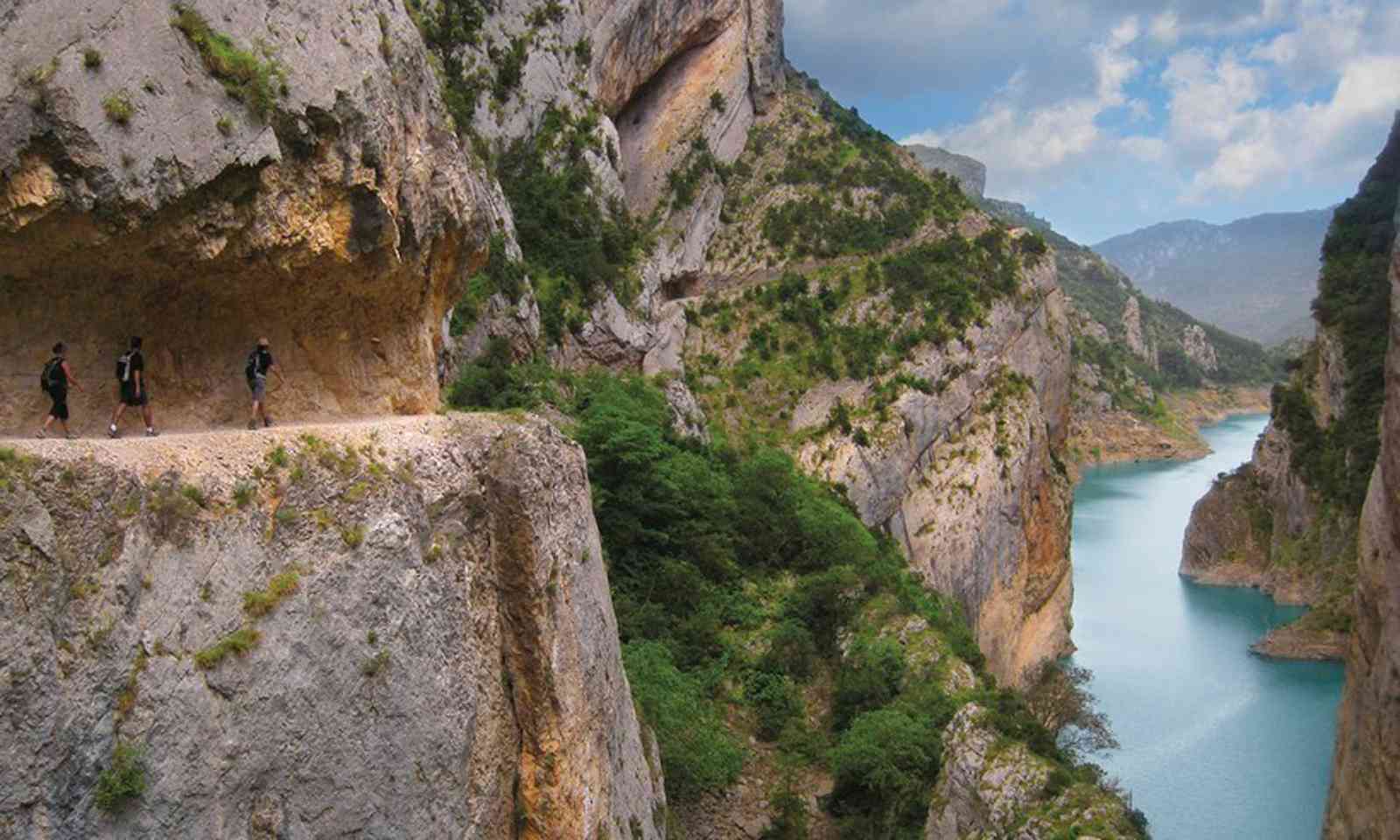 Where? Montsec mountains (The lands of Lleida)

Those without a head for heights, don’t look down. Parts of the precipitous 4km-long Mont-Rebei Gorge trail are cut right into the limestone cliff-sides, high above the Noguera River.

Hikes must squeeze along the path, negotiating rock-hewn tunnels, hanging bridges and narrow, rail-less ledges. The reward? Unhindered views of the majestic canyon and turquoise river flowing far down below. Spain has an extensive network of Vies Verdes, disused railway lines that have been converted into scenic (and largely flat) walking and cycling trails.

The Baix Ebre Greenway, a 26km section of the old Val del Zafán railway, is particularly enticing. From the former station of El Pinell de Brai, the route runs via red-rock ravines, limestone caves, orange-blossom meadows, impressive viaducts and tunnels, and the Ebro River to reach the historic city of Tortosa. The 12th-century Núria shrine sits high up and hidden in a glacial valley of the Catalan Pyrenees. It’s only accessible by the 12.5km rack railway ride from the town of Ribes de Freser, or it can be done on foot.

The best option is to take the scenic train up to the holy sanctuary, then hike back down along the mountain trails, following the stream-cut ravine, looking for marmot and chamois en route. This mountainous national park is small but mighty, with a surprisingly large number of lakes, streams and hiking trails packed into its compact boundaries. The classic route, following trails used since medieval times, is a wonderful 20km east-west traverse, between the villages of Espot and Boí. It’s doable in a long day.

If that sounds too much, concentrate on the section from Boí to the pine-flanked and wildflower-fringed lake of Estany Llong. One of the best things about hiking in the Garrotxa region is the opportunity to fuel up on delicious local specialities, including sheep’s milk cheeses, cured meats, succulent beans and suckling lamb. Suitably fortified, you can head out into the Volcanic Zone Natural Park, a strange yet spectacular landscape of lush, dormant cones and craters.

There are 28 trails in the park, ranging from 30 minutes to all day. Try Footpath 1, a 10km loop from Fageda de Jordà, via beech forest, an old Romanesque church and two of the park’s most impressive volcanoes. With time, you could trace the whole Costa Brava, hiking the cliff-topping and bay-dipping paths of the Camino de Ronda right up to the French border. However, if you have only a day to spare, try the 15km section between the boutiquey town of Begur and the whitewash-and-pastel resort of Calella de Palafrugell.

The trail is clearly marked, and runs via fragrant pine groves, old watchtowers, tucked-away coves, unspoilt beaches and the gentle lap of the Med. It passes lovely little fishing villages, such as Tamariu, named for the tamarisk trees fringing its promenade. It also calls at pretty Llafranc, where you could stop to lounge on the terrace at Hotel Llafranch, just as Salvador Dalí used to do. There are 120 works of architectural intrigue along the Modernisme Route, a way-marked urban amble around Barcelona, including the work of architects Domènech i Montaner, Puig i Cadafalch and, of course, Gaudi.

It would take several days to do the whole trail justice, but a shorter One Day Route gives a great grounding in the Modernist movement, taking in must-see Gaudí monuments, such as the Sagrada Familía, as well as lesser-known, lower-key, hidden-away sites, building a complete picture of this daring design movement. Grapes have been flourishing in southern Catalonia’s Priorat region since the 12th century, and now there are more than 50 wineries scattered across the hillsides here, making some exceptional tipples.

Ancient mule tracks between the old villages have been repurposed as Camins del Vi, or Wine Trails, wending between the sheer rock-faces and hidden valleys, and amid vineyards where you can stop for a tasting or two.

Try the 8km path between the wine-growing hubs of Falset (home to a castle and palace) and hilltop Gratallops, also renowned for its fine almonds and olive oil. Otherwise known as the Route of the Seven Gorges, this 9km-long waterfall-filled circuit is perhaps the coolest walk in Catalonia, offering ample opportunities for refreshing dips in crystal-clear lagoons.