Your full Wanderlust guide to travel in North Cyprus

North Cyprus packs a real punch for a country that doesn’t exist. Not recognised by the United Nations, the Turkish-ruled half of the isle of Cyprus sits swathed in eastern Mediterranean sunshine and diplomatic uncertainty, divided into Greek southern Cyprus and the Turkish Republic of Northern Cyprus since 1973.

To the passing traveller, this political intrigue adds further interest to an already fascinating island. North Cyprus is littered with ancient ruins – sprawling Salamis is the main site, but you’ll discover smaller remains all over the place. The beaches on North Cyprus are some of the least developed in the Med, and frequented by nesting turtles in summer. Inland in North Cyprus there are mountains to climb, some topped by Crusader castles, while the untouched Karpaz Peninsula is like a step back in time, the place to forget politics and instead make cheese, play backgammon and drink thick black coffee with the welcoming locals. 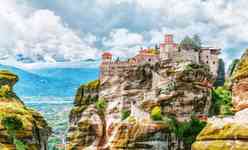