Kosovo travel guide, including map of Kosovo , tips on Kosovon culture, places to visit in Kosovo, when to go to Kosovo and Kosovo travel tips

In world terms, Kosovo is a little baby. Long a part of the Ottoman Empire, then an autonomous region of Serbia, it was only in 2008 – following bitter battles and NATO intervention in the 1990s – that Kosovo declared independence from its Balkan neighbour and became a country in its own right.

It’s a natural treasure, too. Tiny Kosovo is hemmed in by mountain ranges, looming over 2,500m. These provide spectacular scenes – waterfalls cascading down valley sides, traditional farmers shooing herds up hill, snow-topped crags pricking the skies. And it also offers an untouched playground for the adventure-seeker: skiers can hurtle down pistes while hikers and mountain-bikers, can get out amid a rainbow of wildflowers.

Wanderlust tips for travel in Kosovo

Squat toilets are common in Kosovo. If travelling in more rural areas, take your own toilet paper.

Crossing the border between Serbia and Kosovo can be problematic. There have been instances where foreigners holding a Kosovo stamp in their passport have been denied entry into Serbia. Check the Foreign Office website for the latest information on transiting between the two, and for the latest security information.

When to go to Kosovo

Kosovo is best visited in spring – April-June – when wildflowers are blooming, temperatures are pleasant and there’s still snow on the mountaintops. From July to September, Kosovo gets hot (well over 30°C) and busier. In winter ice and snow can make travel in Kosovo more challenging, and rather chilly – temperatures in Prishtina dip below freezing.

Getting around in Kosovo

Driving in Kosovo offers the most flexibility, and hire cars are widely available. However, road quality in Kosovo is poor with large potholes blighting many surfaces, especially side-roads.

Buses connect most towns in Kosovo – they are the cheapest and most convenient way to get around. Trains tend to be slow, and only really useful for long-distance journeys on Kosovo’s north-south line.

Cycling isn’t ideal in Kosovo, due to the poor roads, though there are some excellent offroad opportunities in the mountains.

There are plenty of hotels and motels in Kosovo. Those in cities tend to be quite expensive, catering to business and development workers. Some of Kosovo’s out-of-town motels are often a little shabby and of dubious repute (many rent rooms by the hour...).

There’s no formal B&B network in Kosovo, but making enquiries locally will generally procure a bed in a family home. Campsites are few, though the Rugova Valley and Dragesh area have sites, useful for hikers.

Kosovo is a surprising treat for foodies, serving up some of the Balkan’s best dishes, accompanied by good service. Carnivores should try lamb, often served in kebab form (generally in bread rather than skewered), and pleskavica, minced beef stuffed with cheese. Trout is the most plentiful fish in Kosovo.

Vegetarians in Kosovo can eat a range of stuffed, baked and grilled peppers, of various spiciness. Cheese is a menu staple too: try the soft cheeses of Kosovo’s Dragesh Valley. Local yoghurt is also good, which can be mixed with the abundant strawberries (from April) and other fruits.

Tapwater is generally safe, though it may be wiser to stick to purified water. Ensure you’re up-to-date on standard vaccinations. Employ tick-avoidance measures if travelling in rural areas between spring and autumn.

Hikers and cyclists should not deviate from designated tracks in areas known for land mines – seek local advice if unsure. 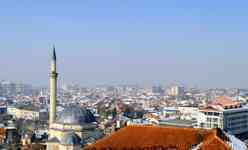