Halfway between Iceland and Norway, to the north of UK, the Faroe Islands are a jigsaw puzzle of 18 volcanic islands, lying far off the tourist radar.

The weather can be unreliable in this stormy section of the Atlantic. But there's wisdom in the local Faroese phrase, “If you don't like the weather, wait five minutes” – conditions change fast at this latitude, and a wild, wind-lashed day could turn sunny in an instant.

Whatever the weather, the Faroe Islands are an intriguing spot. Capital Torshavn, a cluster of brightly coloured houses with Viking heritage, is a good start-point. Then head out on foot: the cliffs are craggy and dramatic, the coastal walking spectacular.

Bird watchers will be in heaven: puffins, guillemots, razorbills and shags fill the skies. Take a boat trip to watch the birds from the sea, and keep your eyes peeled for whales and dolphins in the crashing waves below.

The puffin-beak earrings you'll see in the shops really are puffin beaks. The locals say it's recycling… You may want to give them a miss.

The weather changes within seconds on the Faroe Islands so be prepared to batten down the hatches and sit out a storm when hiking on one of the remote islands. Wear layers.

When to go to the Faroe Islands

The Faroe Islands’ climate is extremely changeable. Rain is plentiful but often short-lived and localised; winds can be ferocious, then just drop away.

Summer (June-August) is the best time to visit, with long days and milder weather – expect 10-13°C. Winter days are dark, and many services close, though temperatures aren’t that cold (January average 3°C).

Vágar Airport (FAE), the only airport in the Faroe Islands

Getting around the Faroe Islands

A good system of roadways and ferries connects most towns and villages on the Faroes, and there are inter-town buses. Torshavn has an efficient local bus service.

Helicopters service some towns and villages for relatively reasonable prices.

There is a campsite along the seafront in Torshavn. There is also a selection of hotels and B&Bs.

Lamb and fish are the main staples on the Faroe Islands. Meat may be hung, and fish dried, to preserve it for a long time.

Whale may also appear on menus. Whales are not hunted commercially here, but the practice has been generally condemned. Do not encourage it by ordering whale ‘out of curiosity’.

Health & safety in the Faroe Islands 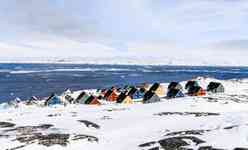 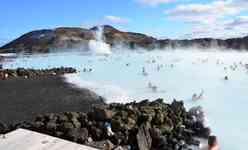