Your full Wanderlust guide to travel in Bosnia and Herzegovina

Many come for a long weekend to Sarajevo to see the city’s fascinating confluence of East and West. Here, Muslims, Jews, Orthodox Christians and Catholics once lived in harmony and you can see all their imprints on the skyline – minarets, domes and campaniles.

Look down and you’ll see traces of the past in the artisan workshops where coppersmiths continue to create tea sets by hand. But for a real taste of Europe as it once was head out into the countryside of Bosnia and Herzegovina where in small, isolated villages like Lukomir, shepherds still tend their flocks.

In the countryside you’ll also find an amazing abundance of fresh water: turquoise waterfalls, lakes and rivers such as the raging Una, which make Bosnia & Herzegovina a prime spot for rafting, kayaking and canoeing. With woodlands that still cover 50% of the country, national parks such as the Unesco-listed Hutobo Blato Bird Reserve and some of the most impressive peaks in the Dinaric Alps, Bosnia & Herzegovina is also paradise for hikers and nature-lovers. Yet despite all these attractions, the country remains little visited. Go now before the crowds arrive.

Bosnians tend be very friendly but if you’re engaged in a political or historical conversation be aware of who you are speaking to – tensions can still run high. While in Hergzegovina do not refer to Bosnia & Herzegovina as just Bosnia. If you are entering a church or mosque make sure you are respectfully attired.  Women should cover their heads with scarfs when visiting mosques and both men and women should remove their shoes.

When to go to Bosnia & Herzegovina

Climate in Bosnia & Herzegovina: Bosnia & Herzegovina’s climate varies dramatically depending on where you are in the country. Herzegovina – the area in the south near the Adriatic enjoys a Mediterranean climate with warm, sunny, dry weather and mild winters. Bosnia in the north has more continental conditions – warm summers and very cold, snowy winters. However, microclimates surround individual mountains. Unless you’re planning on going skiing, summer is generally the best time weather-wise to visit Bosnia & Herzegovina and unlike other more established tourist destinations, you don’t have to face “high season” prices and crowds.

Festivals in Bosnia & Herzegovina: Sarajevo holds an international film festival in August, a theatre festival in October and a jazz festival in November. During the mont h-long Bascarsija Nights festival held in July, the city hosts a range of cultural events from whirling dervishes to Viennese concerts. Mostar also holds a summer festival in July.

Getting around in Bosnia & Herzegovina

By train: With the railways hit hard by the war and repairs still to be made on many lines, train services are limited in Bosnia & Herzegovina. The routes that do exist are reliable and cheap, if very slow and the train ride between Sarejevo and Mostra is particularly scenic. Sarajevo is well-served by a tram network.

By road: Every town and village in Bosnia & Herzegovina is served by a private or public bus system. The buses are more frequent than trains but less comfortable and around the same price for comparable journeys. Car rental is available in the bigger cities. The roads are generally decent, although don’t expect quick journey times as motorways are non-existent. Narrow roads with no hard shoulders, hills, bends and fast drivers make road-cycling in Bosnia & Herzegovina a challenge.

Hotels can be found in all major cities. Many of the large ones built in the socialist period aren’t all that pleasant so it’s worth having a scout around for family-run private rooms and apartments. Feel free to knock on the door where you see a sign saying sobe/ zimmer/ rooms/ camere. There’s huge potential for eco-tourism in Bosnia but unfortunately few campsites. There are however numerous mountain huts which make good bases for hikers. For more information on these contact the Mountaineering Union of Bosnia & Herzegovina.

Vegetarians will have a tough time of things since even so-called vegetable dishes are often cooked with bits of bacon or smoked meats.

Local wines and beers are very cheap in Bosnia & Herzegovina, but the alcohol of choice is, as elsewhere in the Balkans, Rakija – a very strong fruit brandy to be consumed slowly. Turkish-style coffee is very popular.

There are no legal requirements for vaccinations in Bosnia & Herzegovina but its sensible to be up to date with hepatitis A, tetanus and diphtheria jabs. Healthcare in Bosnia is not of the standard in Western Europe. In case of emergencies, contact your embassy. The biggest danger in Bosnia & Herzegovina is uncleared landmines. Steer clear of taped-off areas and abandoned villages. If you’re planning on going hiking or wandering off paths in rural areas, make sure you go with a guide or local who knows the terrain. Beware of pickpockets in large cities 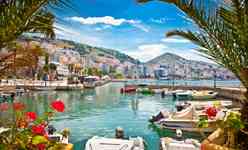