Long-term traveller Justin Egli names and shames the worst gyms he has worked out in around the world... and explains why he loves them so much

When I visit new countries I try to find a local gym. Not only is it good to try and keep some sort of mental/physical routine going when you are on the road, but gyms are a great way to get a glimpse into the local community.

I’m not looking for a fancy one in a hotel or resort, as these are just like the modern ones we have at home. I always look for one that locals go to. The gyms are usually pretty crappy: stuff falling to bits and funny posters on the wall. But that's all part of the fun. 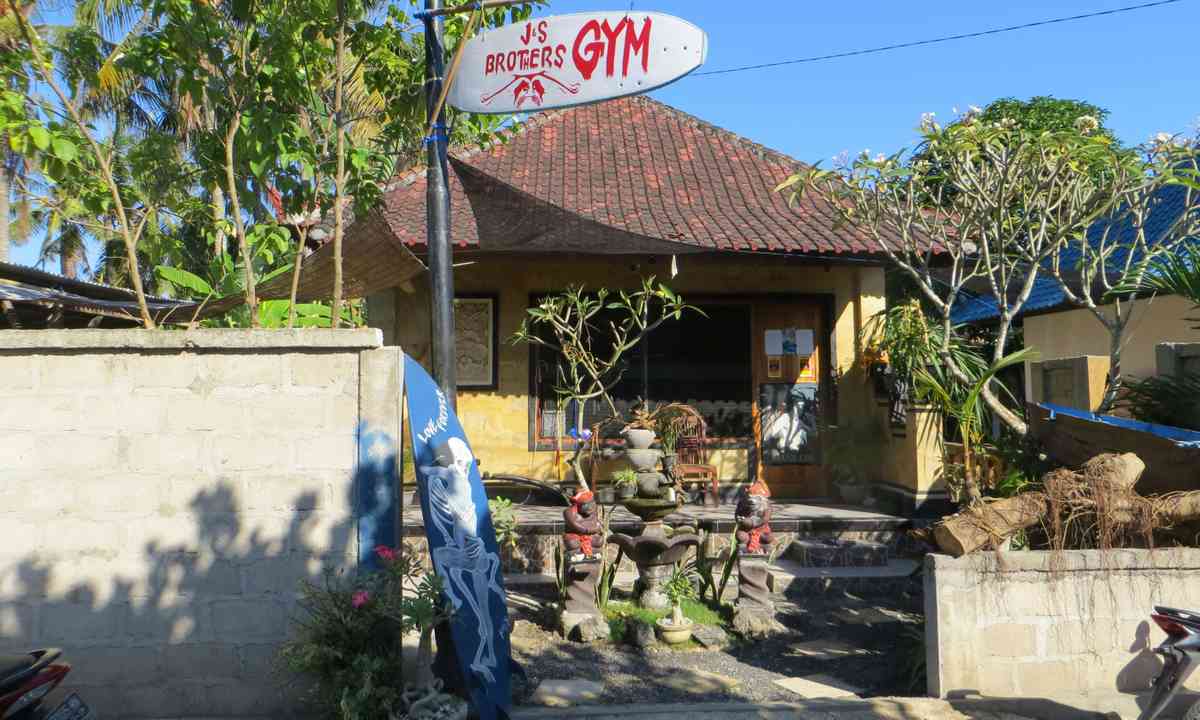 I came across this doozy when I was cycling across Lembongan island off the coast of Bali a few years back. It was a ramshackle mess of a place, with a sweaty leathery Australian guy beating the crap out of a punching bag in the front yard.

“I live on Lembongan seven months out of the year,” he told me. “I’m one of the few foreigners who actually live here long term.”

I asked how much the gym was and he told me he didn’t know. He said he just bought the owner petrol now and again. I told him I didn’t have any petrol so he said for me to just go in and use it for as long as I wanted. So in I went. 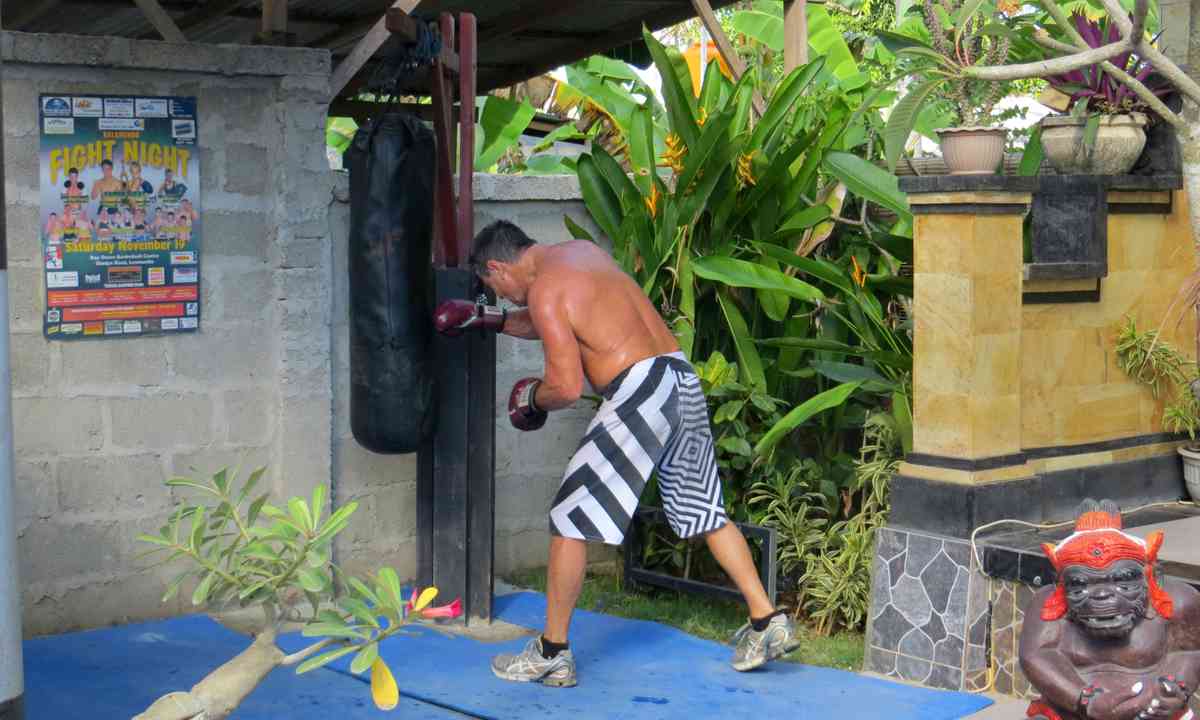 Inside there was a tattoo-covered guy working out wearing a faded California Raisins t-shirt. There was Balinese pop music blaring from an old stereo in the corner. I lifted up a barbell and the weights fell off one end as there was nothing to hold them on with. The guy laughed. I laughed. Then he went back to business.

What I remember most was that there were loads of pictures of stumpy Indonesian bodybuilders stuck to the wall. I kept imagining someone sitting on the floor cutting them all out, then putting Blutac on each of them like some sort of deranged art project.

There was a sign saying that the toilet was broken but the guy in the California Raisins t-shirt didn’t care. He used it a lot. After I finished I asked the leathery Australian guy who I should give money to. He told me to go round the back and see if anyone was about. I found the owner sanding down a surfboard in his garage.

He asked me for the equivalent of 50p. 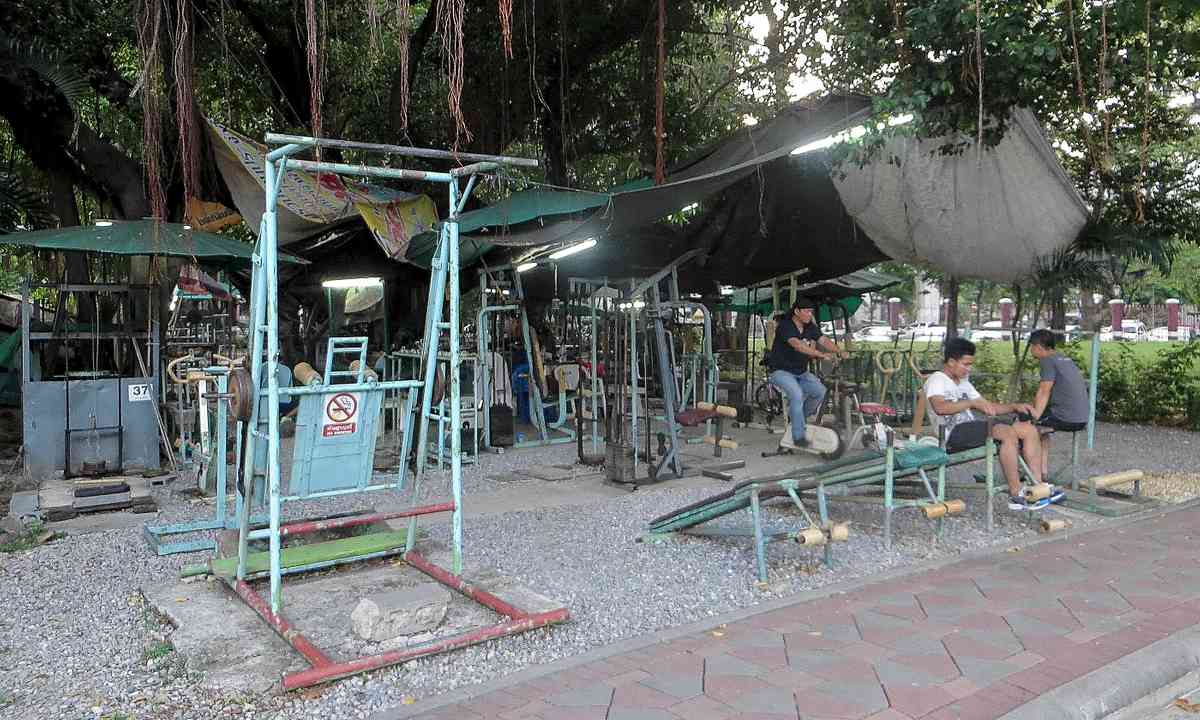 This is a really cheap place to work out if you are ever hanging out in the centre of Bangkok. Gyms are often expensive in the city so if you don’t mind sweating buckets outside, head to Lumphini Park not far from Silom BTS station.

Once you go through the main gates, veer to the left and you’ll see a rustic outdoor gym. The machines are terrible (if you want cardio just run around the park) but there is a decent amount of free weights. It’s free for Thai people, but £1 for foreigners.

Sometimes (if you’re lucky) the sprinklers will be on on the grass beside the gym and you’ll get cooled down. Otherwise, expect to be as hot as you would imagine working out in 35 degree heat. Bring lots of water. 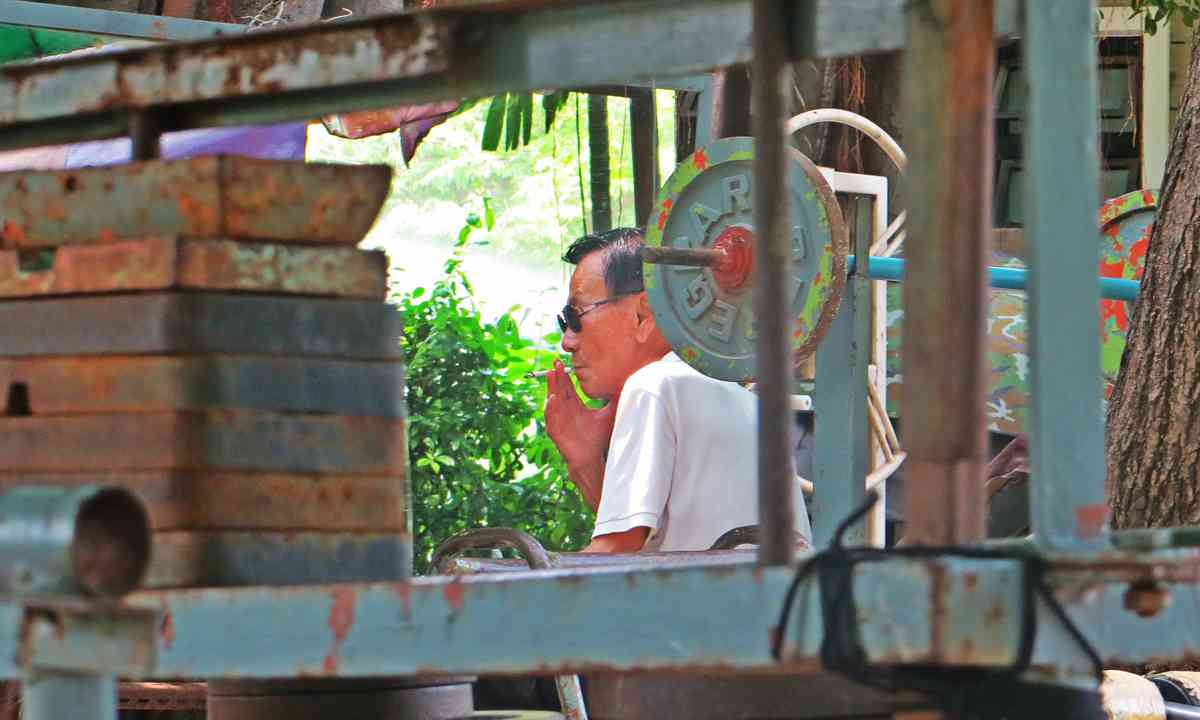 There’s usually a guy sleeping who you are supposed to pay. He’ll come find you eventually, so don’t worry about seeking him out. When I was there some old Thai man just sat on the weights bench the entire time chain smoking and looking at himself in the mirror.

You know those “injury lawyers” adverts you always get on TV? This place would be like a dream come true for them. Sharp metal everywhere. 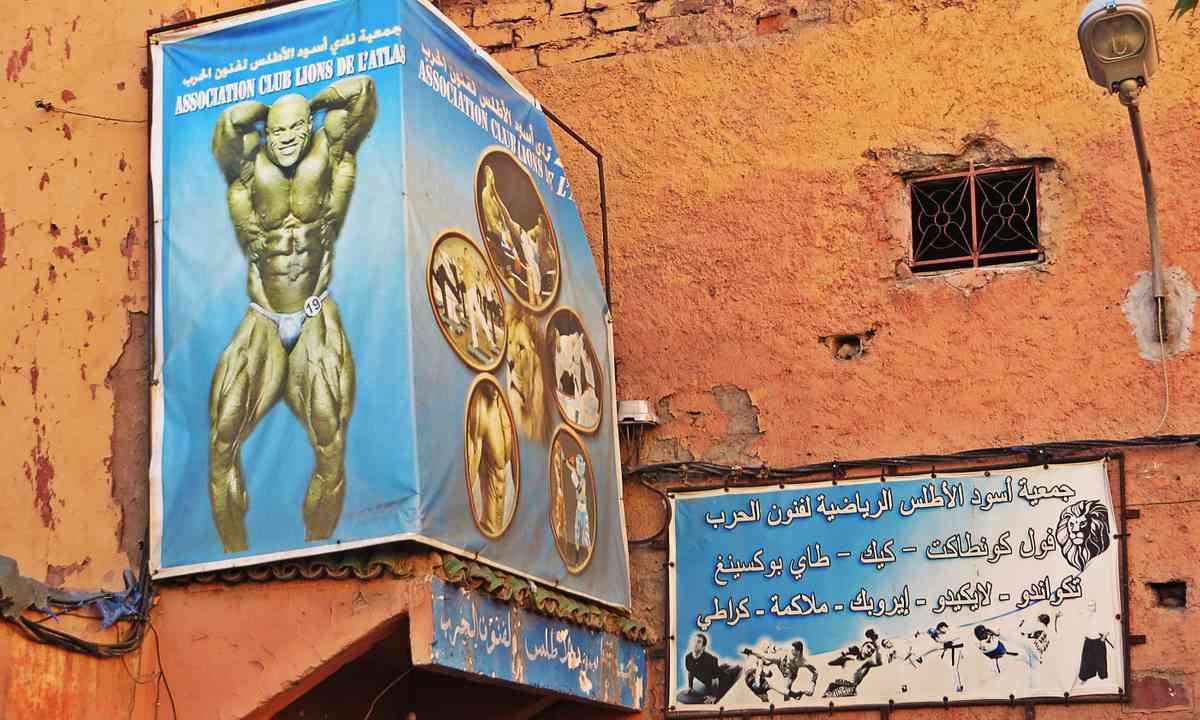 Trying to find anything in Marrakech is a pain. I had heard of a local gym not too far from the place I was staying but of course I couldn’t find it, so I purposely just stood there looking lost. Wouldn’t you know it, a guy approached me within 15 seconds (as I knew he would) and asked me what I was looking for.

Asking for help in Morocco is similar to a private investigator trying to get information out of a criminal in some cheesy '80s movie. The person initially knows nothing but then when you flash the cash – LO AND BEHOLD – they suddenly remember everything. “Ahhh, GYM! Yes I know gym – this way, this way.” So off we went. 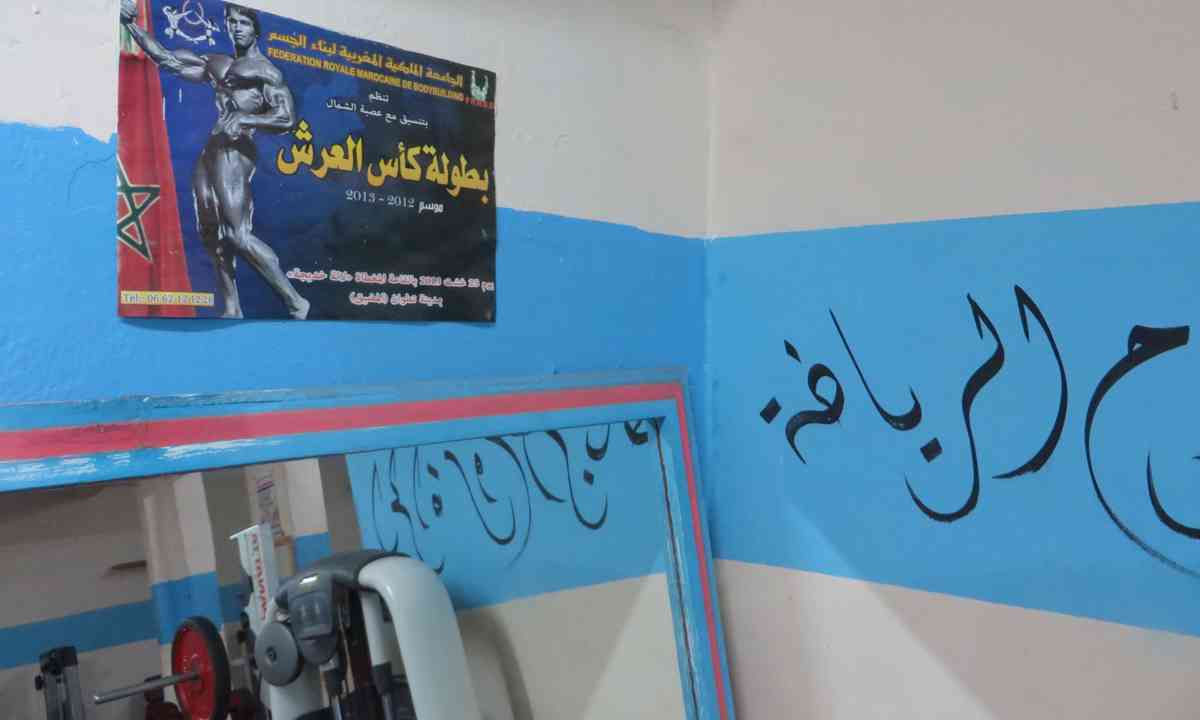 We arrived at an old building with a huge sun-damaged picture of a bodybuilder plastered on the outside and load of arabic writing. Inside a fan was blowing (thank God) and a few big Moroccan guys were working out.

As usual, there were lots of funny posters on the wall including an Arnie one with more Arabic writing. At one point a reggae-dub-techno track came on the stereo and a few guys started dancing. One big Moroccan guy was in the corner eating a chicken. And then there was me sitting there in a pair of fluorescent shorts and a cut-off NOFX tshirt. It was an odd afternoon.


Have you had any weird experiences working out abroad? Tell us about it in the comments below.

Justin Egli writes about Tokyo subculture and his travels around the world at ikimasho.net.