Royal Balinese cooking is a taste sensation, rich in robust, pungent, sizzling and unique spices and flavours. Fortunately it’s no longer the preserve of the elite...

Until the late 20th century, the Bali cooking visitors know today was reserved for festivals and royalty. The staple diet of most ordinary people was rice and vegetables, nibbled throughout the day and eaten semi-formally at two-hour intervals or dauhs, along with mangosteens, durians, fried dragonflies, crickets and occasional meat.

But with increased prosperity, the Balinese adopted royal cuisine as their own – much preferring it to Western food, which they consider nyam-nyam, or flat and tasteless. However, these days some concessions are made for the tourist palate. Royal Balinese food was traditionally served at room temperature; today it’s usually warm, if not hot. The strong chillies Balinese adore are added less liberally to dishes served to visitors. And many of Bali’s original recipes have been forced to adapt: flying foxes and pangolins – game staples when Bali had abundant forests – have been replaced by chicken; sea turtle meat and blood (to flavour stews and sauces) are prohibited.

But Bali’s glorious spices are still used. Many of them, such as kencur and white turmeric, are unique to the region. The age-old cooking methods are still prevalent too. You’ll see few woks in Bali – most traditional Balinese dishes require hours of marinating and slow-cooking, with food wrapped in banana leaves and roasted in stone stoves with rice husks or coconut bark for fuel. The results are worth the wait though and – as with the dishes below – fit for a king too.

5 dishes you should try (and where to try them) 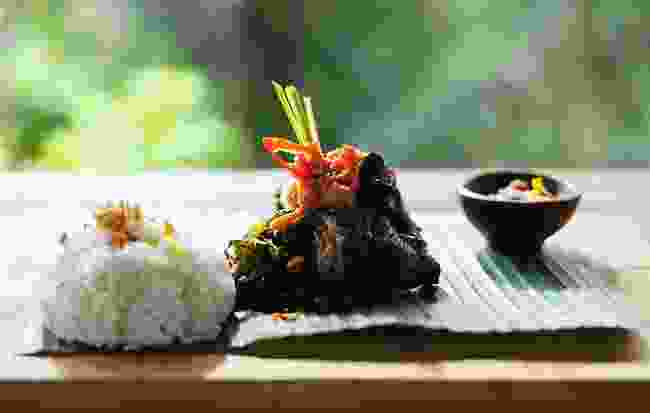 This slow-roasted duck dish is a favourite of Bali’s King Tjokorda Raka Kerthyasa – the monarch still maintains an old open-air kitchen at his palace in Ubud, where his mother prepares this. Traditionally, ducks are wrapped in banana leaves, marinated in a pestle-pounded paste of red chilli, garlic, ginger, turmeric, earthy kencur, belacan shrimp and tangor juice and cooked in embers for 12 hours. Try it in its authentic form at a royal Balinese banquet at Hotel Tugu on Canggu beach. 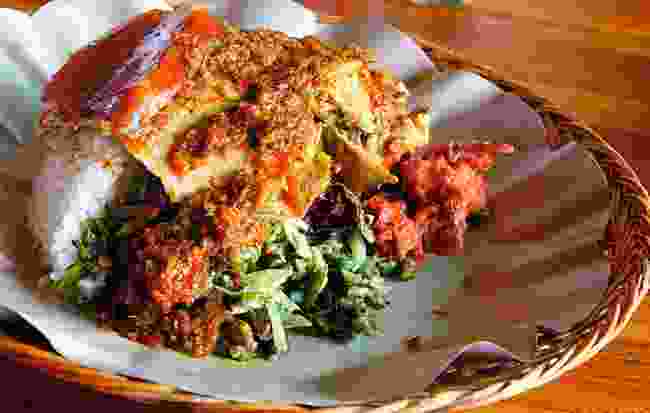 Spit-roast suckling pig has been served at ceremonial events in Bali for millennia. The secret to the sumptuous, smoky flavour is the marinade and the patient cooking process. Piglets are stuffed with chilli, garlic, red onions, turmeric, ginger, peppers, kencur and fish paste andturned over a coconut-husk fire for hours. To eat the real thing you’ll need an invite to a Balinese wedding, but roadside warung café-restaurants are the next best thing. Pak Malen in Seminyak and Ibu Oka in Ubud are local favourites. 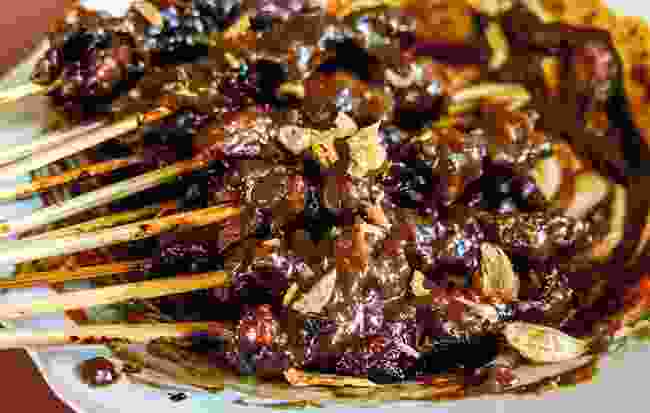 Satay – mini kebabs with peanut sauce – is synonymous with Bali. Prepared properly, it’s a dish famed for its delicacy, served at royal banquets and bearing little resemblance to the limp facsimiles found worldwide. A century ago sate lembat was made with turtle meat, kneaded into a paste of coconut cream, onion, nutmeg and ginger-like roots including isen and kencur. Nowadays chicken or fish are used. Sate is served throughout Bali, including at Biku in Seminyak, which is owned by Australian-born Princess Asri, Queen Consort of Bali. 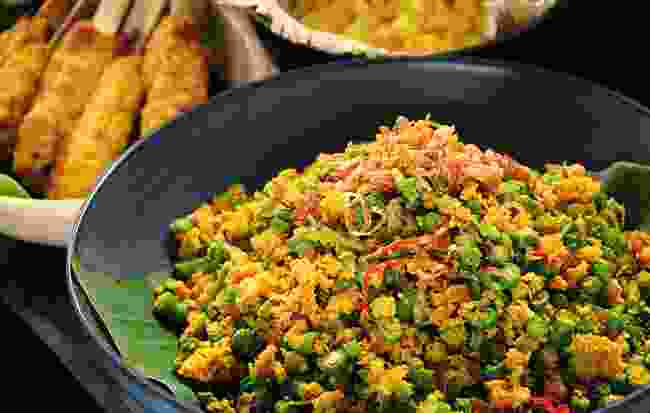 This curried stew is made with green beans, eggs and either meat or jackfruit cooked in a sauce of kaffir lime, galangal and turmeric, and served with rice. Either made with blood (red lawar) or coconut milk (white lawar) it is popular islandwide. Mads Lange (at the Capella Hotel) and Murni’s Warung in Ubud offer the best of both versions. 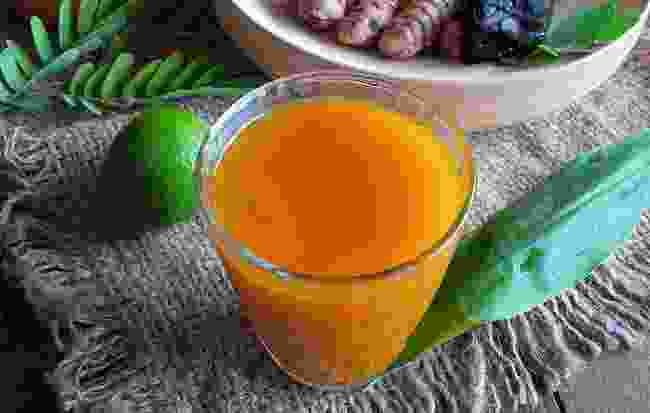 Jamu means medicinal herb in Balinese and you’ll often see locals drinking this traditional energising tonic first thing in the morning or before and after visits to temple. It’s made from turmeric, ginger, lime, temu putih (white turmeric) and honey, and is a powerful and refreshing pick-me-up. It’s for sale all over the island – you can buy it in large bottles from Naturami in Denpasar.