The Olympics have finally arrived – the World Eskimo Indian Olympics, that is. As Alaska hosts the championship’s 60th anniversary from 21 July, here’s everything you need to know 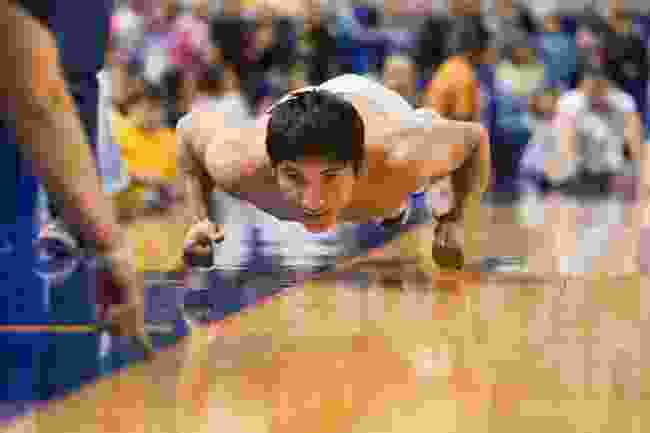 Forget cycling and swimming, instead, the World Eskimo Indian Olympics (WEIO) honours traditional skills used by native Americans, many of which were required to survive.

Dating back to 1961, the event originated in Fairbanks in the US state of Alaska, and after a stint in Anchorage city, it has returned. The 2021 edition takes place over four days, from 21 to 24 July, in the Big Dipper Arena.

The event preserves tests of strength, agility and endurance, as well as performative arts and other crafts practiced by native communities such as the Iñupiaq and Yup’ik. 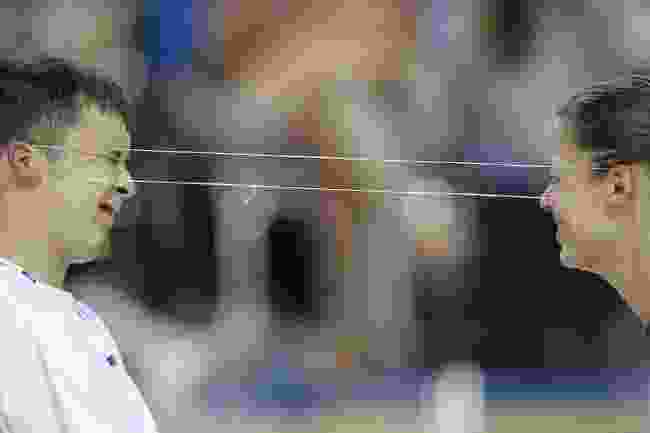 Even as an observer, the endurance activities will make you wince. Athletes competing in the knuckle or seal hop for example mimic a seal propelling themselves across the ice by doing push ups on just their knuckles and toes – the winner is the person who travels the furthest.

The winner of the ear weight challenge is also the person who can travel the furthest – only in this category, lead weights swinging from twine are wrapped around their ears. The painful exercise is designed to mimic natives’ endurance for frostbite.

The ear pull meanwhile involves two contestants in a tug of war – with their ears. The goal is to pull off a sinew looped around your opponent’s ear. Expect blood. 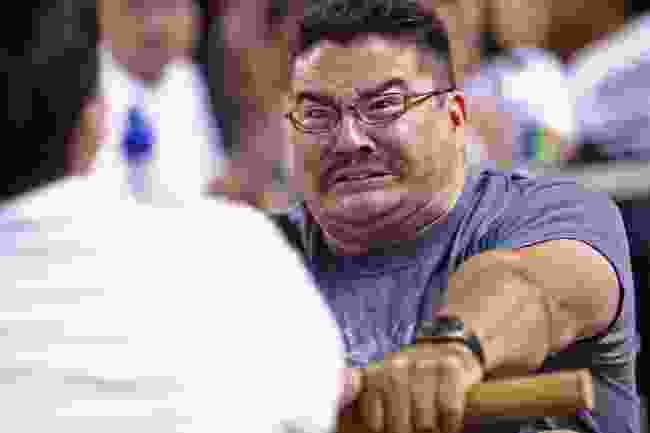 As the name suggests, the four man carry sees contestants travelling as far as possible while carrying four men at the same time, an activity inspired by hunters carrying wood, ice or food back to their community. Drop the bomb also tests athletes’ strength: athletes must extend their arms and legs like a starfish and maintain the position for as long as possible while being carried by their wrists and ankles.

The Indian stick pull is essentially a tug of war with a greasy pole, inspired by natives wrestling with a fish’s tail, while the Eskimo stick pull involves two contestants grappling with a stick as if they were pulling a seal out of a hole in the ice. The winner is the athlete who manages to take the stick from their opponent, or make them fall over.

Pesky seals inspired the arm pull too, which sees two athletes lock their legs and one elbow, with one hand on the other’s ankles. The goal? To straighten their opponent’s arm – or pull them over.

The last strength test is the bench reach. Athletes kneel on a padded bench, and someone sits on the backs of their lower legs while the athlete leans forward to put an object on the floor as far away as possible. 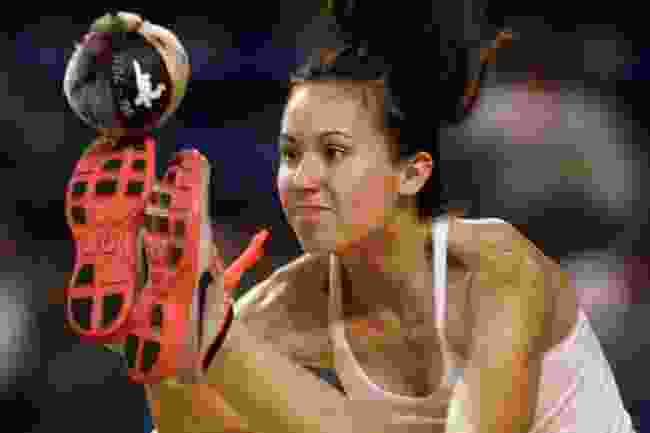 The one- or two-foot high kick is one of the Olympics’ most important events. Traditionally, kicks were used to communicate across distances too far for a shout or a whistle to be heard. A kick signalled that the hunters had caught a whale and the villagers must get ready to help them cut it up. To demonstrate, athletes must jump and kick a suspended object and land on their feet. The Alaskan high kick meanwhile sees an athlete hold his or her foot with the opposite hand, then swing their other foot up to kick a suspended target – the winner is the person who kicks the highest target.

The kneel jump demonstrates speed and agility, as it has evolved from the need to act quickly when you’re on ice that’s about to break apart. From a kneeling position, athletes must leap to a standing position, as far forward as possible. 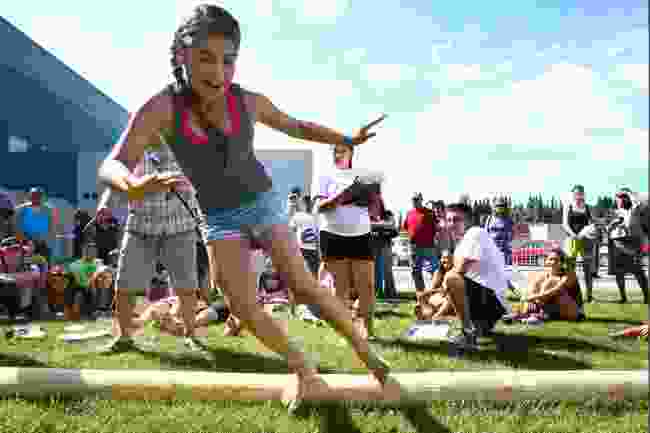 The greased pole walk is fun to watch, as contestants test their balance by walking barefoot across a horizontal greased pole as far as they can without falling off – an activity based on natives crossing a slippery log.

Don’t miss the one hand reach too, which demonstrates balance and strength: contestants must balance only on one hand while touching a ball suspended at various heights with the other.

The toe kick meanwhile assesses balance and agility: from a standing position, athletes jump forwards while kicking a stick backwards as far as they can and balancing again. 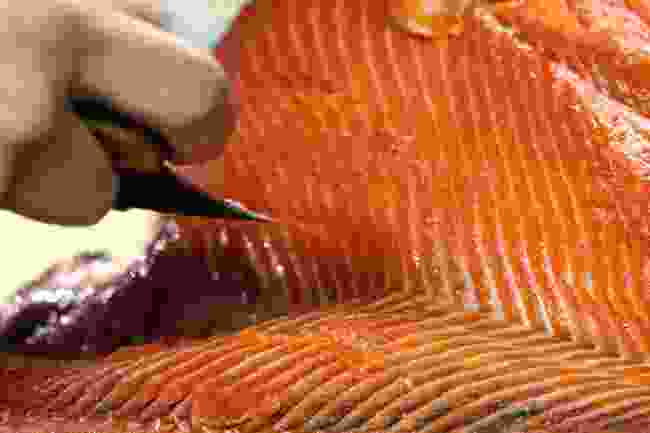 While sports dominate the Olympics, the event is also an opportunity to show off other cultural skills, some of which are assessed on dexterity or poise.

Watch natives remove the head and backbone of a salmon quickly and neatly, just as locals do, without wasting valuable food.

Participants also take part in a seal skinning match. While seal meat is eaten in some communities, the skin is used to make clothes and the blubber used for oil – nothing is wasted. So today, observers can watch contestants removing a seal’s skin as neatly and quickly as possible, while keeping the head on.

Squeamish? Then watch the nalukataq, or blanket toss, instead. Traditionally, whale crews would throw sweets from a blanket made from whale, seal or walrus skin for fun. The game has been adapted so that now a 40-strong team hold the blanket with a rope while tossing someone in the air as if they were jumping on a trampoline. The winner is the person who achieves the greatest height in the most graceful manner. 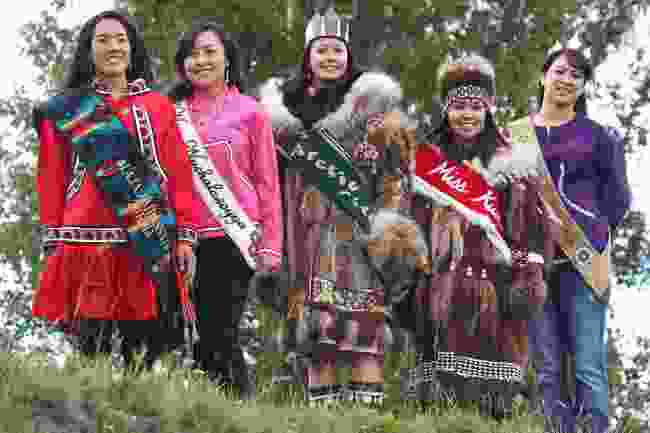 As well as dance and storytelling sessions, the event has a Miss World Eskimo Indian pageant, which tests contestants’ cultural knowledge.

If that doesn’t appeal, how does all-you-can-eat blubber sound? Muktuk is made from frozen or raw whale skin and blubber. This game sees contestants eating muktuk as fast as they can – all in the name of fun.