Newcomers to the African continent will find a perfect entry point in Windhoek, where rich culture and natural beauty are always at hand...

Windhoek is Namibia’s capital and international gateway, and is nestled deep in a picturesque valley in the centre of the country, flanked by the Khomas Hochland Plateau to the west and the Auas Mountains to the east. For those who have yet to visit the country, a Namibian holiday may bring to mind worrying visions of sweltering heat. But at 1,700m above sea level, Windhoek is spared the oppressive weather found in many other parts of the country, with temperatures rarely going over 30 degrees (ºC) in summer, while in winter they dip to around six degrees, on average.

Settled by the Germans in the 1890s, it has an interesting mix of European and African architecture, but it’s keen to shake off its provincial image and colonial past, and modern skyscrapers are springing up in contrast to its incongruous German castles. The city has spread over the years, but is still small for a capital, and it’s relatively safe and quiet – especially for an African city – with clean streets free of chaotic traffic and honking horns. Those familiar with some of the more boisterous areas of the continent will understand why Namibia is often dubbed ‘Africa for beginners’.

Windhoek may be short on major sights, but with comfortable guesthouses and good dining options, it makes a pleasant place to spend time at the start of a trip, stock up on supplies before driving on, or relax before your flight home. 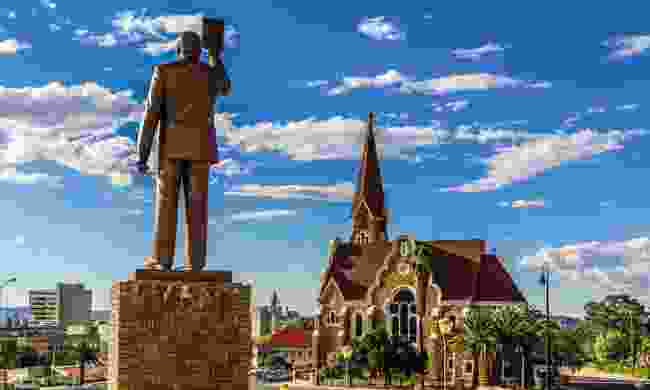 Hosea Kutako International Airport is located 45km and a 45-minute drive west of the city. There are no direct flights from the UK. South African Airways and British Airways have daily direct flights from London Heathrow to Johannesburg for onward flights to Windhoek with South African Airways or Air Namibia. Total flight time is approximately 13 hours, depending on connection times. In Arrivals there are currency exchanges and ATMs, car hire firms and safari company offices.

Arrange a transfer through your hotel or operator, or use a registered transfer shuttle such as City Cab, rather than take a taxi.

If you are coming from elsewhere in Africa and looking to save money, Intercape Mainliner operates budget-friendly bus routes from South Africa and Botswana. 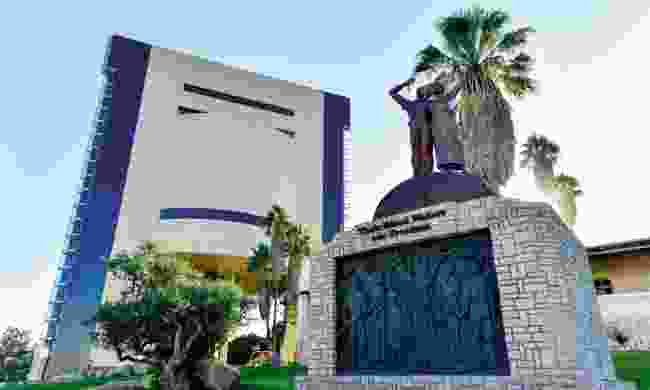 Start at a landmark: the Christuskirche church built in 1907. Nearby, the Independence Memorial Museum tells the story of Namibia’s struggle for independence, finally achieved in 1990.

If you’re short of time, a three-hour City and Township tour with Chameleon Safaris will gives a good overview of the country’s fascinating history.

After exploring the city centre, including the ‘Ink Palace’ and Parliament Gardens, drive to the Penduka Women’s Centre, a non-profit organisation that enables women to support themselves by teaching them handicrafts. You’ll also visit a market in the Single Quarters, part of the growing Katutura Township, to learn about – and try – the staple foods.

The Namibia Craft Centre is filled with small stalls selling Namibian-made ostrich egg jewellery, baskets and more. If you’re still feeling energetic, Equitrails offers horse riding for all levels in the scenic Eros Mountains, just 15km north of the city. And for dinner, try Joe’s Beerhouse, one of Windhoek’s top restaurants and beer gardens, with local meat and game as well as vegetarian options.

Top tip: All Windhoek’s museums are free; the Independence Memorial Museum and the National Museum of Namibia give a sense of the country’s complex history. 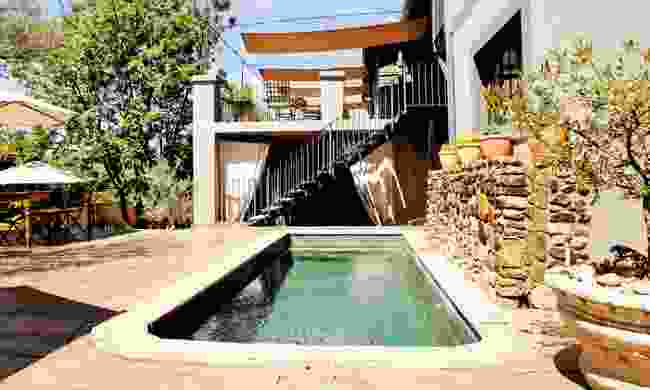 Top-end: The Olive Exclusive (22 Promenaden Road) is an intimate boutique hotel with expansive suites decorated in neutral tones, African materials and local art. There’s a good-sized pool – some suites also have their own plunge pool – and the Olive Restaurant is one of the best in the city.

Mid-range: The 11 individually decorated rooms at the Olive Grove Guesthouse (20 Promenaden Road) are stylish and comfortable, and there’s a small pool and a rooftop Jacuzzi.

Budget: The Rivendell Guesthouse (40 Beethoven Street) is in a quiet city suburb, with a choice of en suite, shared bathroom and self-catering rooms, as well as kitchen facilities and breakfast. There’s a small pool and they can organise car rental and tours.

Go. Windhoek makes the perfect beginning and end to a journey, but there’s so much more to explore. Etosha is Namibia’s largest national park. Its watering holes are a draw for large herds of plains game and predators, especially in the dry season.

The sculpted sand dunes of Sossusvlei and the blackened remains of long-dead trees at Deadvlei in the Namib-Naukluft National Park are among the county’s most iconic sights.

The Kunene region in the north-west is one of Africa’s last great wildernesses, home to epic scenery, the semi-nomadic Himba people and remarkable wildlife. It’s bordered on the west by the wild Skeleton Coast National Park, where fur seals lie amid rusting shipwrecks.

For a taste of Botswana’s Okavango Delta without the price tag, the Caprivi Strip in the north-east is bordered by the Okavango and Zambezi Rivers, with a beautiful landscape and wildlife. 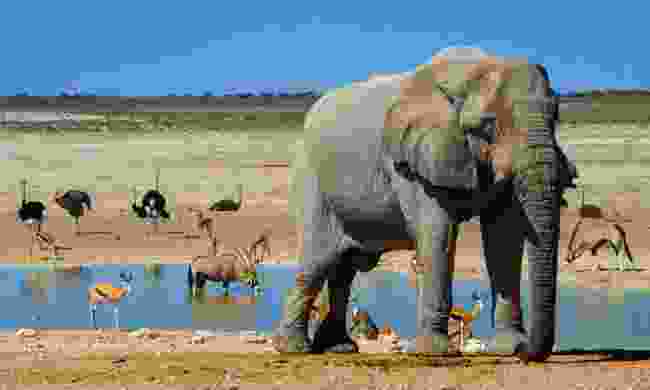 Languages: English is the official language, but Oshiwambo, Afrikaans, German and many tribal languages are also spoken.

Visas: Not required by UK nationals for stays of up to 90 days.

Health issues: Recommended immunisations: diphtheria, hepatitis A, tetanus and typhoid. There’s a risk of malaria in north and east Namibia, especially from November to June, so make sure to consult your doctor for the recommended prophylaxis and cover up to avoid bites. It’s also best to stick to bottled water.

Web resources: The official website of the Namibia Tourism Board is namibiatourism.com.na.

Climate: Namibia is a year-round destination. Winter is the dry season, running from May to October, with the best game viewing in Etosha National Park from June to October. Days are warm but nights can be cold, especially in the desert. The summertime runs from October to April, with November to February the hottest months. November marks the start of the rainy season, with showers normally arriving in the afternoon. The wettest period is from January to March.