There are so many incredible places to visit in South-East Asia, you may be wondering: why add another to the list? Well, Cambodia has so much to offer, and a few surprises, too...

Cambodia’s already a well-known stop on a tour of South-East Asia, and now it’s shaping up to be one of the most exciting.

It’s easy to see why, too. Cambodia’s got something for everyone - from ancient temples and beautiful beaches to modern, vibrant cities and a few unexpected highlights. 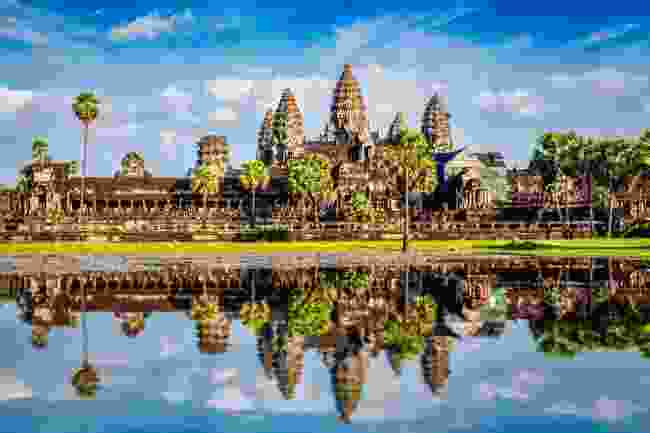 You don’t need a PHD in ancient civilisations to be wowed by Cambodia’s archaeological treasures. Siem Reap’s Angkor Wat — the sprawling temple complex dating back to the 12th century — draws the biggest crowds.

We recommend rising early to enjoy the most spectacular sunrise of your life, before checking out other nearby sites, such as Angkor Thom, a lesser-known ancient walled city, and Ta Prohm, which doubled as a backdrop for the first Tomb Raider films. 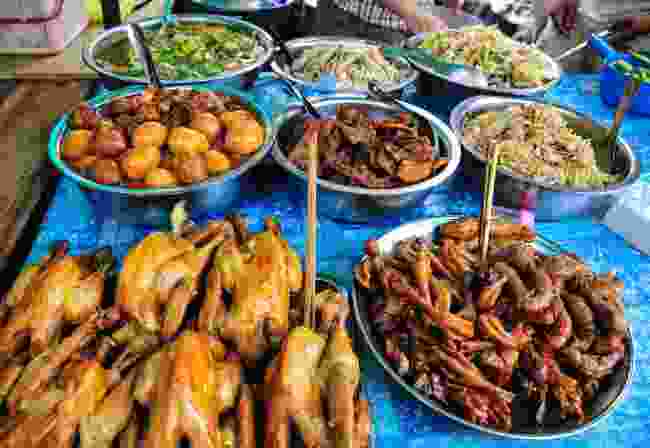 Local food at a rural market in Kampot, Cambodia (Dreamstime)

Given Cambodia’s close proximity to Thailand and Vietnam, it’s not a huge leap to discover that Cambodia’s mouth-watering cuisine shares certain traits. This includes spiciness – although in Cambodia, chilli is usually served on the side, rather than being mixed into dishes. However, you’ll also find dishes which are unique to Cambodia.

Generally, food contains less coconut milk and sugar than Thai cuisine, with ingredients like bananas, limes, lemongrass and shallots used to add flavour. Herbs, rather than spices, are often used to liven up dishes. Pork and chicken are the most popular meats, although seafood – especially crab and squid – is popular in coastal areas. 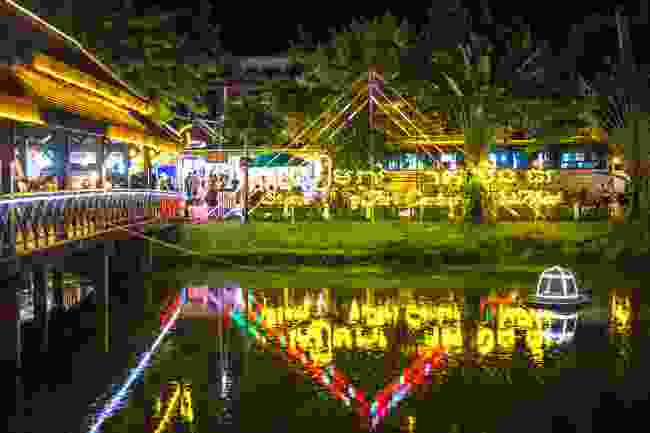 Believe it or not, Phnom Penh is emerging as one of South-East Asia’s most exciting nightlife destinations, thanks to its cheap riverside cafés and innovative bars, such as the tuk-tuk bars you’ll spot in the Bassac Lane area.

But our favourite spot for a sundowner has to be the legendary Foreign Correspondents' Club. This riverside watering hole opened in the early 1990s — a popular hangout for journalists documenting the country’s post-war recovery. It has retained its art deco appearance, and foreign correspondents are still entitled to a discount.

It’s an essential stop-off for anyone visiting the city, despite the fact that the vast majority of customers are writing postcards, not newspaper articles. 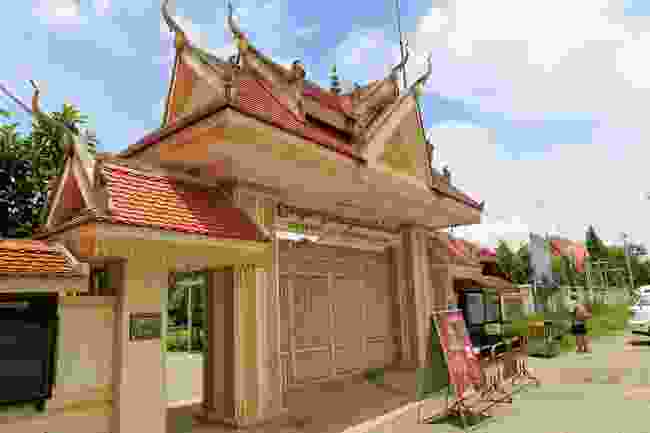 Cambodia is a vibrant success story, albeit shaped by some of the 20th century’s darkest days – the Cambodian genocide, which occurred between 1975 and 1979, when the country was ravaged by the Khmer Rouge.

A tour with a local guide is the best way to gain an insight into the past, especially with an NGO-supported tour guide.

We recommend paying a visit to Choeung Ek, otherwise known as ‘the killing fields’. This sprawling memorial, best explored on a day trip from Phnom Penh, was an execution site during the Khmer Rouge’s reign.

A visit to Phnom Penh’s Tuol Sleng prison, where thousands of Cambodians were imprisoned and killed, is just as harrowing. Both are essential for anyone keen to understand more about the country’s history. 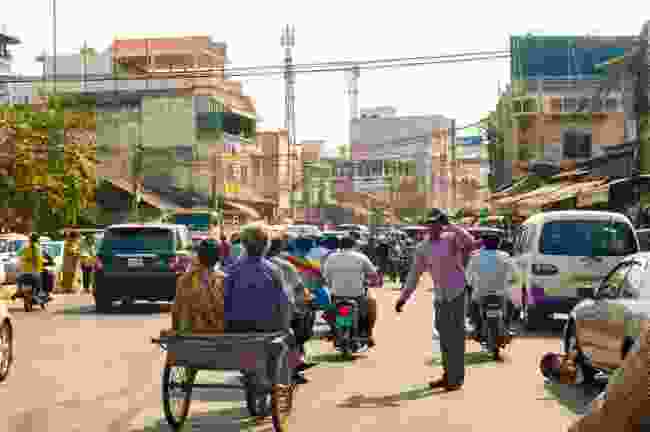 Locals battle the traffic on a main road in Phnom Penh, Cambodia (Dreamstime)

Cambodians are incredibly proud of their country’s recovery, and are keener than ever to show the wider world that it’s very much open for business.

So, mingle with locals where possible, whether it’s by booking a dinner at one of Siem Reap’s many NGO-funded training restaurants (for example, New Hope Cambodia – a vocational training restaurant), or with a visit to one of the country’s social enterprises.

One of the best is Phare, a Siem Reap-based performance troupe and social enterprise set up to offer local youth training and employment. 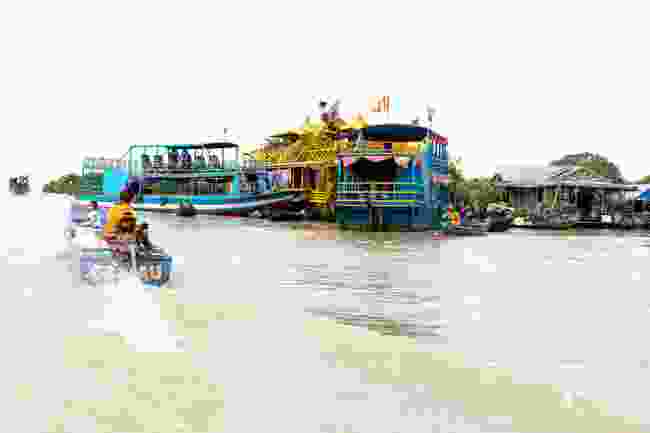 A snapshot of the floating village in Siem Reap, Cambodia (Dreamstime)

Cambodia’s landscape is beautifully diverse. Although it’s most famous for its temples, it’s also got some of Asia’s most breathtaking beaches, along with a substantial chunk of the Mekong River – the longest river in South-East Asia

And then there’s Tonlé Sap lake, near Siem Reap. Its banks are home to three million people, many of whom live in floating villages. No visit to the area is complete without a tour of the lake. These excursions usually include visits to Tonlé Sap’s fish farms, followed by opportunities to meet locals and find out more about their life on the water.

We’ve also got a soft spot for Cambodia’s towns and cities, which include the bustling, steamy heat of Phnom Penh and colourful Kratié in the east. This historic town is famous for its French colonial buildings and wide, tree-lined boulevards. 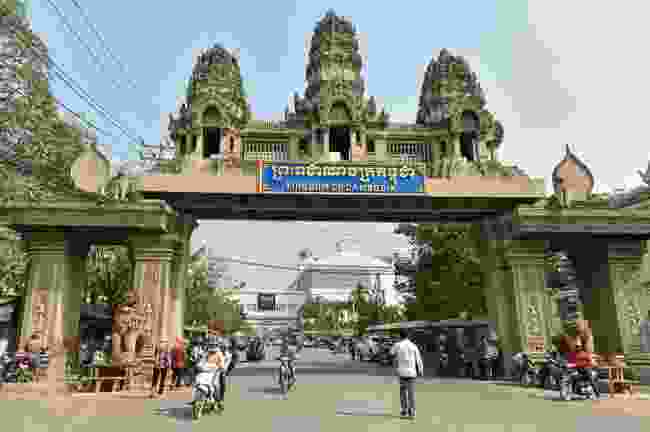 The border crossing from Cambodia to Thailand, in Poipet, Cambodia (Dreamstime)

Cambodia makes the ideal base for an overland exploration of its neighbours – namely Laos, Thailand and Vietnam – and it’s easy to combine all these destinations on a single trip.

This is also a good way to experience the colourful chaos of a border crossing, when you drive across the border from Vietnam into Cambodia, or into Thailand. Flights will link you too, but nothing beats the excitement of driving overland into a new country.