Why paradise should come with a health warning

Life in the sun can come at a price. Liz Cleere has a health scare in the middle of paradise – and has a few words of caution for sun-loving travellers

After the night of storms, we were supposed to be on our way to the boatyard. But these five deserted islands of Ko Ha were holding us back: the water was the most pristine we had seen from Langkawi to Phuket, the tidal beach was revealing itself again, and the nesting terns were singing and swooping with joy. When would we get another opportunity to stay somewhere like this? It wasn’t time to leave yet.

The main reason to visit Ko Ha is for the diving and snorkelling. Tripper boats arrive from the mainland throughout the day, disgorging groups of snorkellers into some of the clearest water in the area.

The lagoon between the islands packs a variety of coral into its healthy garden, and with a depth of no more than six metres, it opens up an aquarium of colourful reef fish to even the most timid of swimmers. Liveaboard dive boats stay longer, their passengers getting to play around in the underwater caverns and swim-throughs for which the islands are famous. 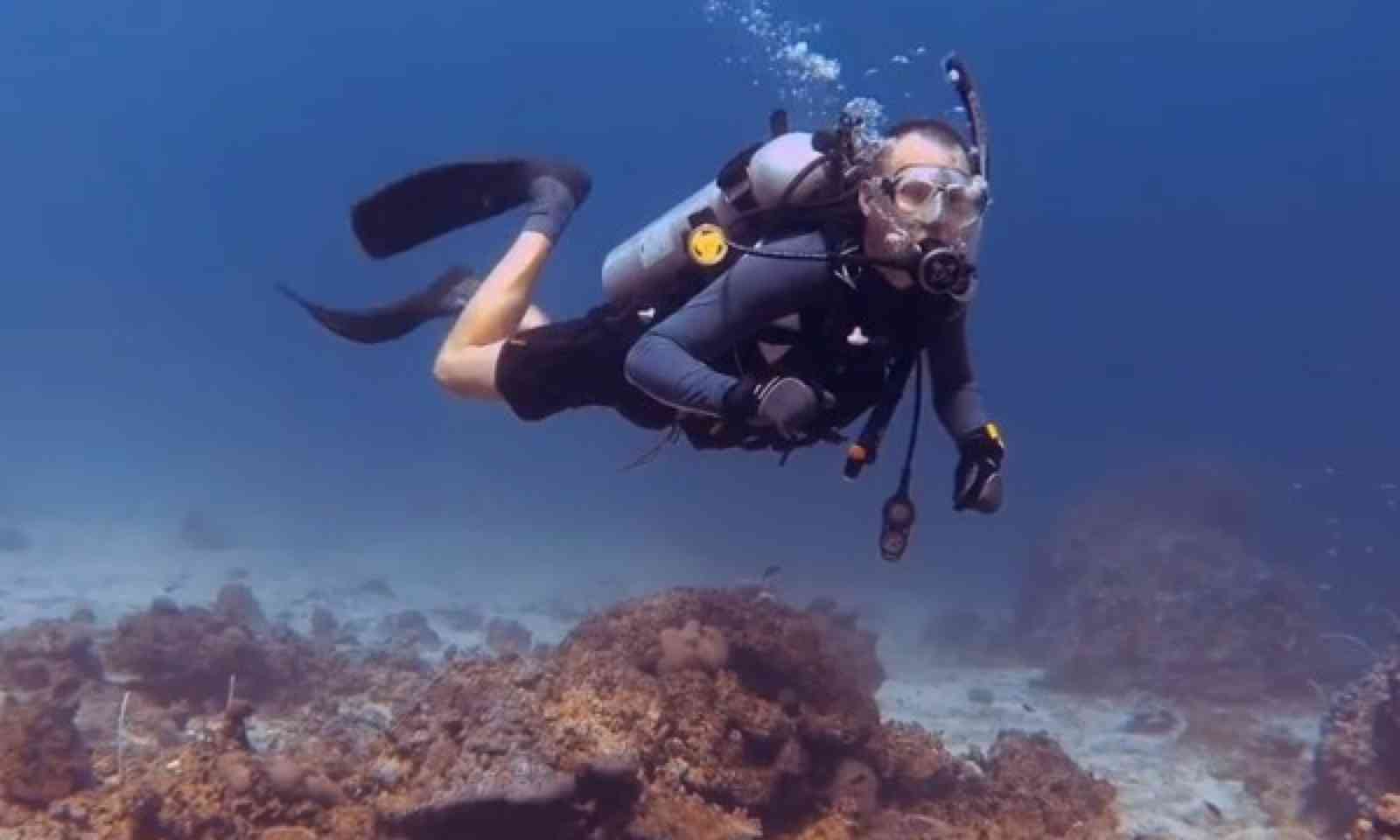 Like most places in this part of Thailand, it can get crowded during the high season, which runs from November to April. But in late May the tripper boats were all tucked up back on the mainland, their skippers over-seeing repairs and maintenance. We were the only ones here.

So the American and Jamie began the day with a dive. American had already lost a speargun over the side of his boat earlier in the morning, which he would retrieve on the way back from their underwater odyssey. Ko Ha is under the protection of the Ko Lanta Marine National Park and fishing is prohibited, so he wouldn’t be allowed to fire it anyway.

After using the mooring line as a guide for their descent, they checked the ropes and heavy concrete slabs fastened to the sea bed. Both boats looked as safe as we could hope for. A moray eel made a dash from the concrete block beneath SY Esper to a coral funnel from where it observed them, its nose pointing upwards.

Although a certified diver, I prefer to snorkel these days, but I could do neither during this break at Ko Ha because I was recovering from a minor skin operation. This meant no swimming until the wound had heeled.

During our stay at Ao Chalong in Phuket, we had taken advantage of the renowned hospital facilities on the island to have our skin checked. The joy of living in the tropics in constant warm weather and life-giving sunshine is intoxicating for people like us who come from northern Europe. But it comes with a price: skin cancer.

We're not the types who go in for sun-bathing, and most of the time we cover up. We don't use sunscreen because in this heat and humidity it just slips off into our eyes and mouth. But, unlike our fellow Aussie yachties who are scrupulous in shielding their skin from danger, we occasionally overdo it, forget to cover up and fry. 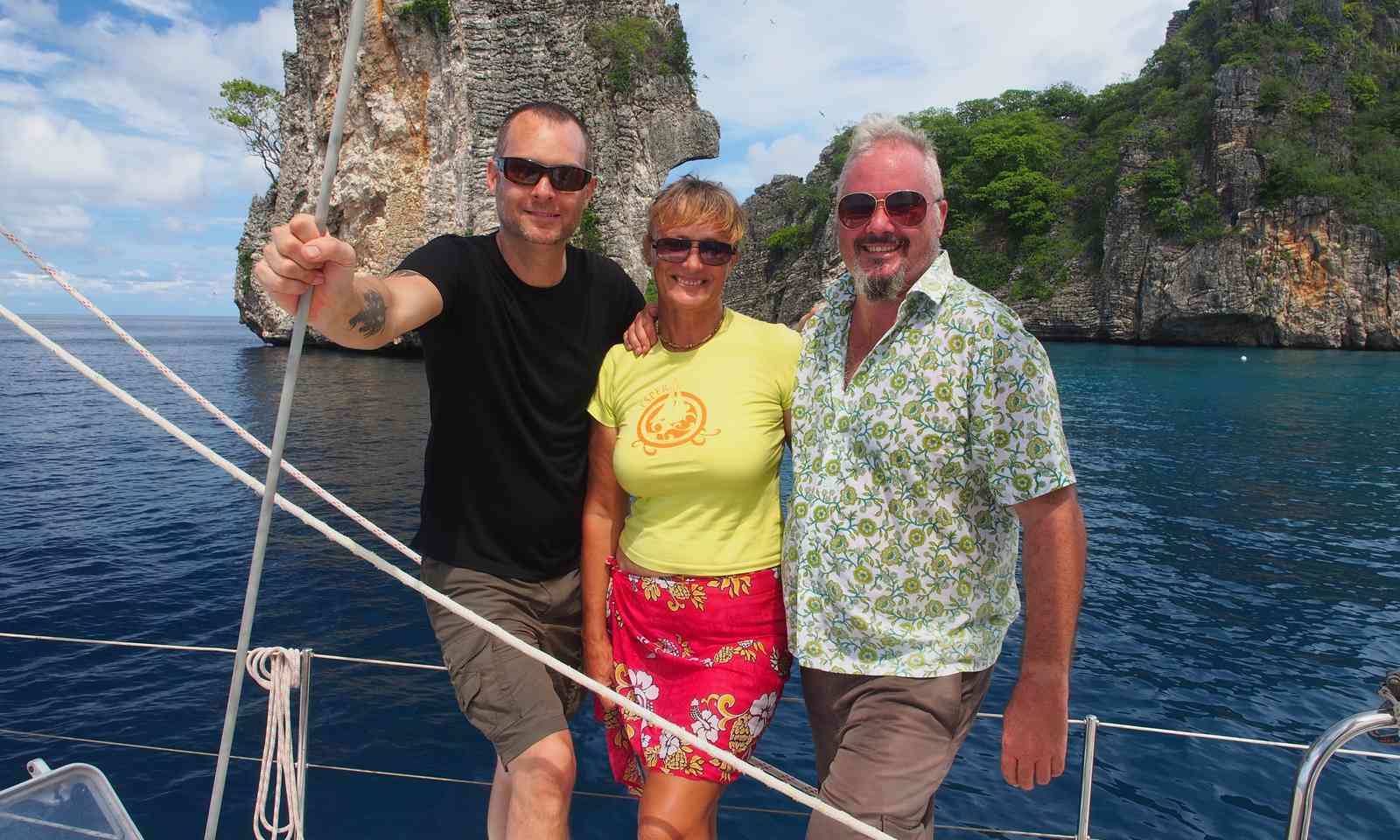 Over the years, we had grown a few new moles, freckles, weird polyp things and strange blemishes on various bits of our ample bodies, and I was concerned. The Bangkok Hospital in Phuket is a galaxy away from the NHS hospitals we're used to in the UK – in fact, it's more like a 5 star hotel. We walked in, were seen immediately, and walked out two hours later having had a thorough seeing-to by a teeny-weeny, pale-skinned dermatology specialist named Dr Vasinee Kerdvongbundit.

Jamie had the all clear. I wasn't so lucky. High on my back, Dr Kerdvongbundit found an evil raised black mark in a sea of redness. I couldn't see it, but Jamie looked through the doctor’s eye-piece and said it was 1mm in diameter, and obvious if you knew what you were looking for.

And that's the thing of it. Do you know what to look for? And do you have someone to check those places you can't see? I've been pretty vigilant about my old moles, checking to see if they change shape or colour, but that's about it. A little Google research using the NHS websites and Cancer Research came up with some useful advice. Apologies in advance for shameless cribbing, but I reckoned both institutions would be less bothered by plagiarism and more interested in getting the word out.

Check moles regularly and see the doc if you notice any of the following:

1. Moles with uneven colouring – most moles only have one or two colours, but melanomas have lots of different shades

2. Moles with an uneven or ragged edge – moles are usually circular or oval with a smooth border

3. Moles which are bleeding, itching, red, inflamed (swollen) or crusty

4. Moles that get a lot bigger – most moles are no bigger than the width of a pencil

Dr Kerdvongbundit removed my mole and sent it off for analysis. I was lucky. She called me a couple of weeks later to tell me the biopsy showed no sign of malignancy or cell dysplasia. I am in the clear, but it was a lesson learned. I now take greater care of my skin, and we keep a store of water-resistant factor 50+ sunscreen on the boat. Mostly, though, we cover up, especially in the middle of the day. 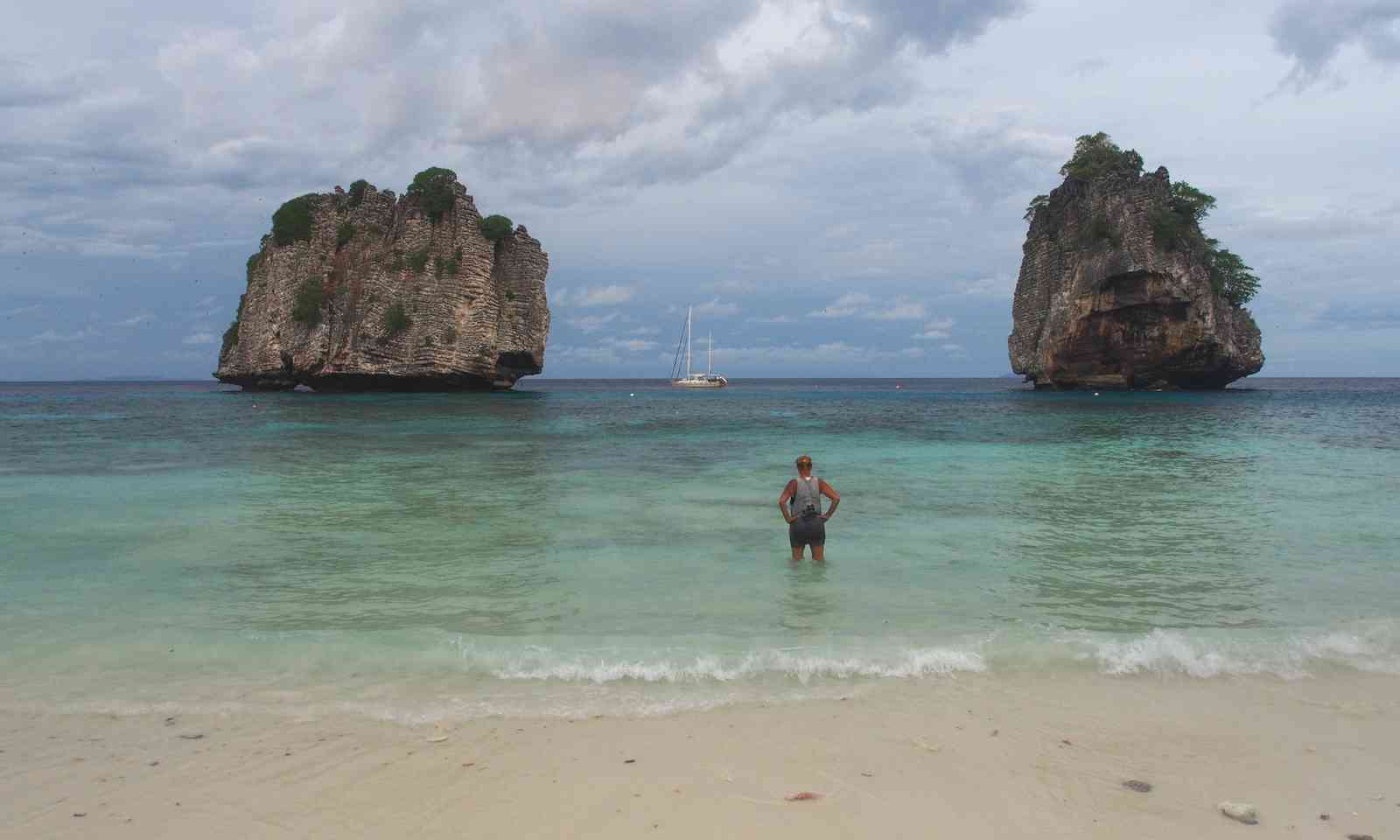 While Jamie and American explored underwater, Alicia and I had fun on the newly-made beach. Each time the tide goes out a new white silica beach appears, along with the flotsam and jetsam of the moment. Stranded red and purple starfish lay in the rock pools and small fish darted in the lapping wavelets. Coral and shells were scattered on the sand. We tried climbing the rocks to get further into the island, but they proved too slippery and sharp for our flip-flops.

This serendipitous break had been exceptional, from anchoring next to remote rock faces, sitting in the middle of a thousand nesting terns, seeing off squalls, diving healthy coral reefs and exploring a brand new beach each day. After one more night under the moonlit cliffs, it was time to move on.

Koh Ha still goes down as one of our favourite anchorages from Turkey to Thailand.