Jamie was sitting at the chart table, editing our latest video, when this unusual call for help on SY Esper’s VHF radio cut through the one-track mind of his concentration. He turned up the volume and listened again. The breaks between his hails were getting closer together, and each time the man’s tone and volume rose higher. The desperation in his voice and message suggested he had been calling for a while, but Jamie had no idea for how long. Nobody answered him.

Channel 16 is meant to be constantly open and monitored while underway, and all vessels are required to assist in emergencies, i.e. maydays and pan-pans just like the (albeit unconventional) call Jamie was hearing now.

Apart from being the first place to send and receive emergency signals, 16 is used to receive messages from the Coast Guard concerning weather warnings or advise on restrictions to navigation. And it is the first channel we all use when entering a new port. All harbour master offices have VHF radio receivers and transmitters. But in two years, the only voices we had heard on the radio in SE Asia had been receptionists guiding new customers into various marinas between Malaysia and Thailand.

We had never heard any other traffic on the VHF.

We seldom have the radio on once we’re tucked up inside a marina, but for some reason – maybe to keep him company while I was still back in the UK – Jamie had left channel 16 open.

The man continued with his hailing. Still nobody answered.

Realising that he might be the only person in the vicinity prepared to reply to the man’s plea for help, Jamie’s instincts kicked in.

“Vessel requesting assistance, this is SY Esper, do you copy? Over.”

For the next hour Jamie worked with the marina and the caller, who was at anchor about 30 miles away, to arrange for help to be sent to SV “EB Transporter”. It was a pains-taking process, slowed down by several strong accents hampering the meaning of some messages. Luckily everyone spoke the phonetic alphabet, a necessity when trying to relay information by radio.

The captain had collapsed with a heart attack and the skeleton crew did not know what to do, or how to make a mayday call. It turned out that the commercial vessel was not only surrounded by other boats at anchor, but was much closer to the harbour master than we were. It still remains a mystery to all of us why no-one else heard, or chose not to respond to, the call. After several phone calls to the police and harbour master a doctor was despatched to the vessel where he attended to the captain. Jamie heard later that the captain survived.

Back in the UK I had been tending to Mum while she recovered from a fall. She recovered slowly, but was now less mobile. My brother and I put in place our own care system which allows her to stay at home and gives her some independence. Satisfied that she was in good hands I flew back to meet Jamie. 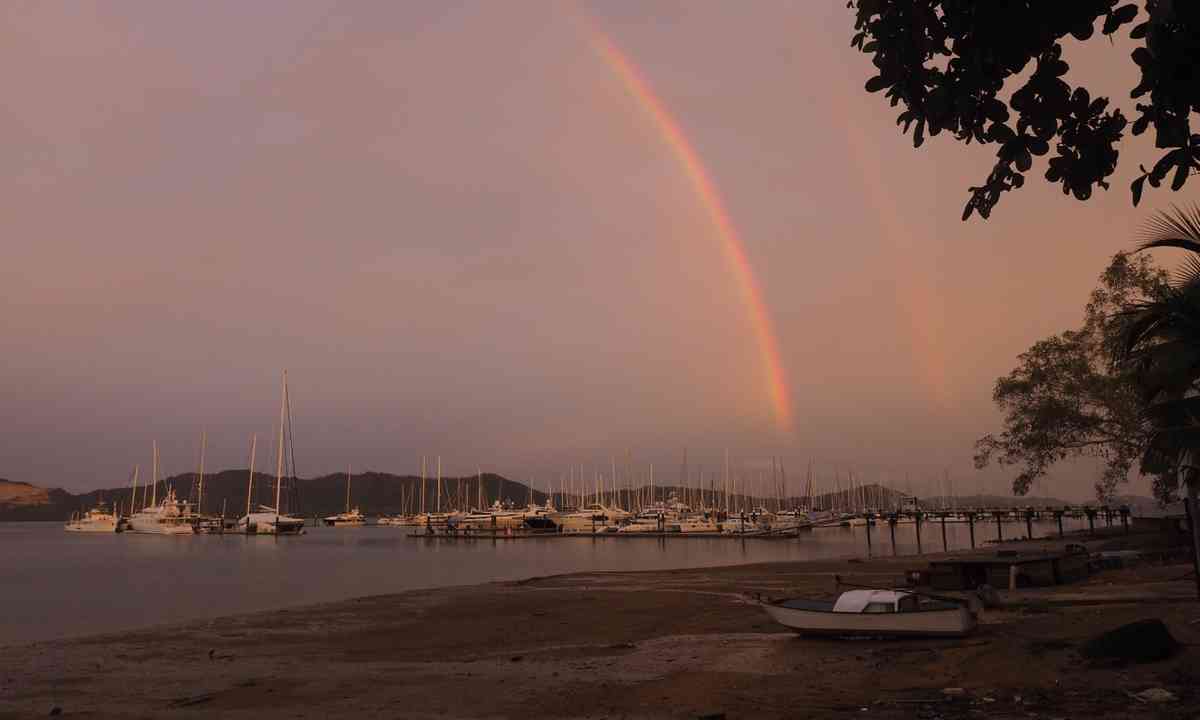 Yacht Haven Marina is on the north eastern tip of Phuket in a spectacular bay, about as far away as you can get from the holiday hotels on the east coast and dots of cheap bungalows spread round the island. The area is predominantly Muslim, and many of the marina’s two hundred workers walk and cycle to work from nearby villages. Surrounded by rubber plantations on one side and the sea on the other, you can find monitor lizards swimming between its pontoons, cicadas and frogs in evening who-can-shout-the-loudest contests, and birds of all sizes mingling with the boats.

Out in the bay there are yachts at anchor, slowly moving back and forth on their anchors as the tide ebbs and flows. Brahminy kites and the occasional sea eagle dive for the plentiful fish.

Although the marina has its own bar and restaurant, most of its visitors eat in one of the three neighbouring local cafés. 'The Living Room', with tables and chairs set out on sand, caters mainly for yachties and day trippers, producing excellent western and Thai dishes, as well as a particularly authentic full English breakfast. 'Papa Mamas' is renowned for its spicy and fragrant Thai food and is usually filled with locals and ex-Pats, as well as cruisers. It is set on rickety Lemony-snicket stilts over the water.

'Coconuts', run by the ever-youthful Pen, tends to be the place people gravitate towards in the evening. She has a menu, but customers in the know never use it, taking the lead from her on what’s good that day. She forages for green leaves, stalks and shoots and doesn’t buy fish from markets, preferring to take them straight from the long-tail boats which work in the bay. Her prawn cakes are simply the best we’ve eaten in Thailand, and when she has fish, it’s everyone’s number one choice.

It was good to spend a week or so in this peaceful place preparing SY Esper to sail during the day and joining new and old friends in the evening. Soon, though, we would be leaving. We were just about ready to venture north to the shallow waters of Phang Nga bay.