We waited, slept, and waited some more. It took three days to get the all-clear to travel to White Island, New Zealand’s most active volcano. A speck of land some 30 miles off the coast of the North Island, near Whakatane, there was a distinct allure about the place, a certain kind of adventure in setting foot on an island that might go up in smoke at any moment, taking you with it. I would put up with the putrid stench of sulphur (think rotten eggs) and the faint risk of mortality in order to say, “Hey, did I tell you about the time I walked around on an active volcano?”.

The reason for the delay, though, was actually quite dull. I’d love to say that the island was expected to explode at any moment, Krakatoa-style, painting the skies red over the South Pacific. Whereas in actual fact, it was just too windy, the seas too choppy to get a boat close to the island and moor up.

And so we dug in at Whakatane, where there wasn’t a whole lot to do. The cinema kept us occupied one night, while on the next day we hired a pair of boogie boards at nearby Ohope Beach, hoping that somehow we could tame the frenzied waters. The chopped-up tides proved too much for us to ride, however, but we weren’t alone – we spotted a blue penguin battling against the waves, flapping helplessly like a poor pigeon that has somehow strayed into a washing machine. 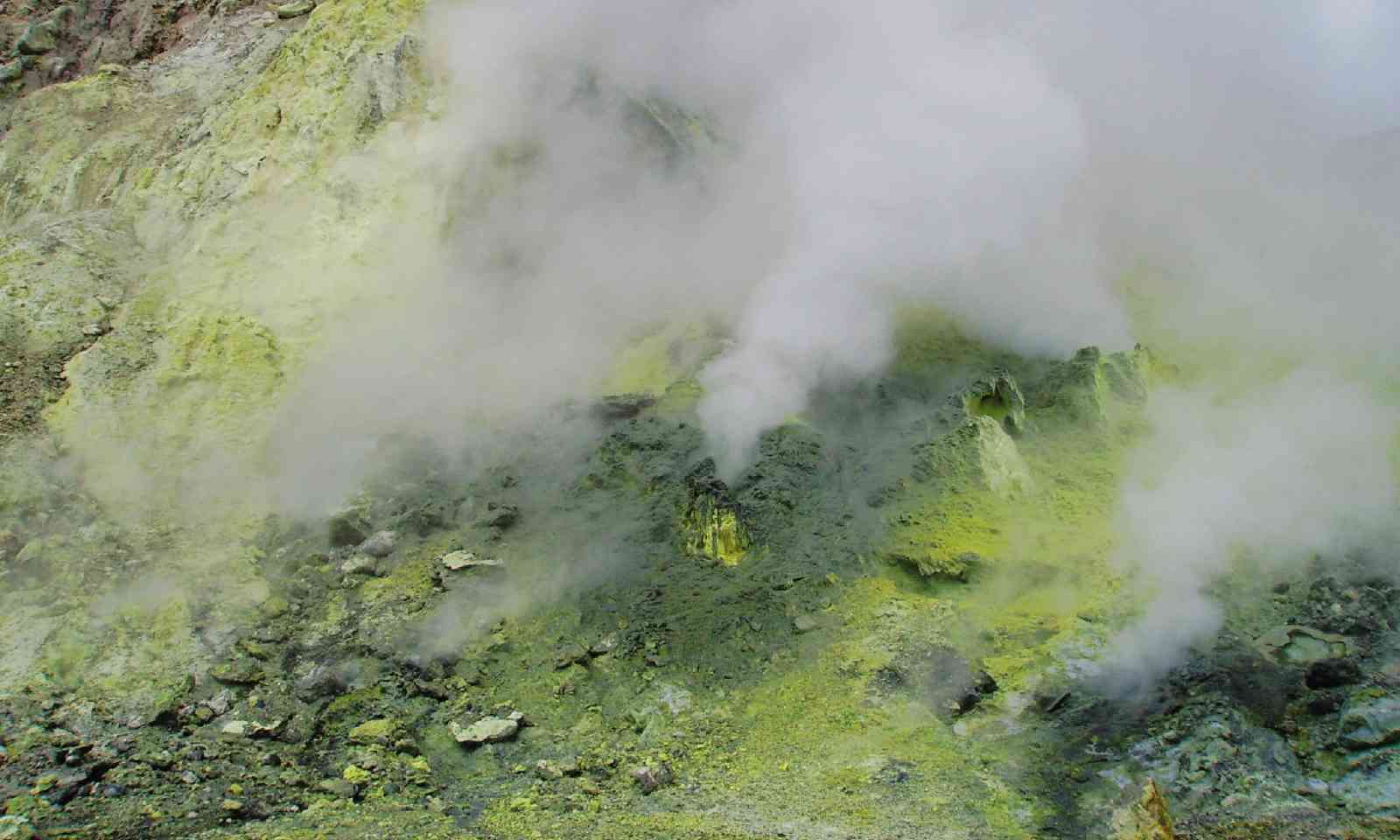 On the second night, the hostel owner’s Maori husband serenaded us with traditional songs and stories. The songs sounded proud, yet tinged with sadness, as if longing for a bygone age. “There are a few stories about White Island,” he told me, “or Whakaari, ‘the dramatic volcano’, as we call it. Probably the most common tale is about a pair of fire demons that rose up out of the sea there. The volcano is the remains of the fiery trail they left behind.”

On the third day, we got the go-ahead to sail. I began to wonder just how bad it had been on those last few days, because even today the boat bounced aggressively off the waves, making me seasick for the first (and only) time in my life so far – so much so that I turned down my complimentary cookie from the boat crew (a disastrous error, I realised in retrospect – Cookie Time cookies are some of the best in the world). Being fitted with a gas mask didn’t help my nausea much, but I took my chance to breathe in the fresh sea air before the ubiquitous sulphur smell of the volcano inevitably overtook my senses.

Arriving at White Island, could best be described as arriving in Hades across the River Styx – if Hell had blue skies and fluff y white clouds. Steam seemed to rise from every single inch of the island, while the rocks were stained unnatural shades of deep red, rusty orange and luminous yellow, like the rotting carcass of a long-dead sea monster. Multicoloured vapour blocked the horizon like a discoloured rainbow, hiding pots of sulphur rather than gold.

We made our way inland to the crater lake near the centre of the island, passing ruined buildings and mines as we did so. Sulphur mining had been abandoned in 1914 after the entire workforce was wiped out by an eruption – only a cat managed to survive. I felt as though we were stepping across a graveyard. I felt queasy again, numbed, suspecting that I might be having some kind of hellish nightmare.

The earth seethed hot, putrid fumes, the steam curling out of the ground and warming the air. Mud pools burped and spat like angry cauldrons of boiling oil. Edging closer to the crater lake, I could feel the heat boiling off it, the toxic fumes enveloping me and briefly denying me access to oxygen. I fumbled for the gas mask hanging around my neck as panic started to set in, but was saved by a change in the wind direction, the cool breeze saving me from suffocation. 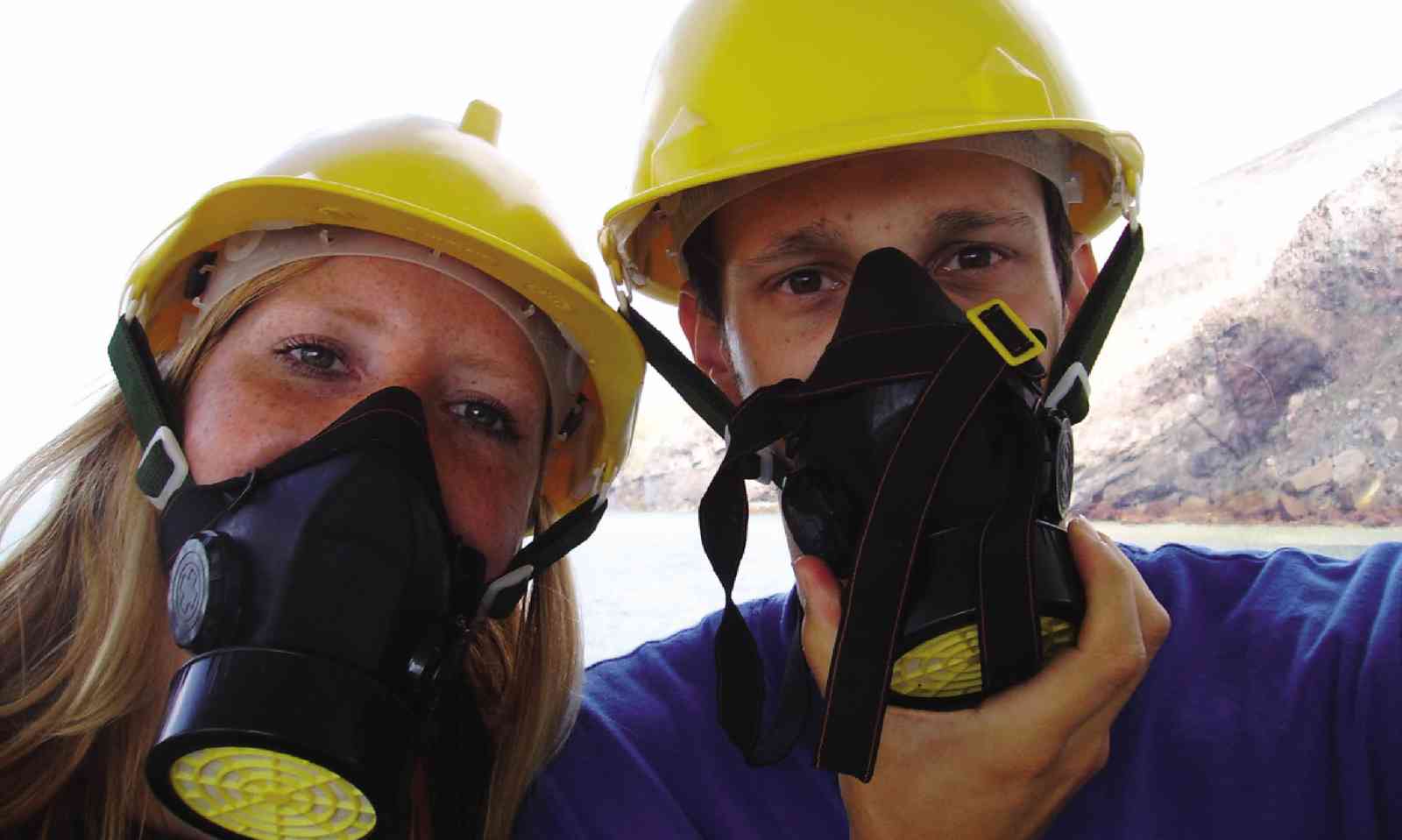 “Yeah, better not get too close to the lake,” the tour guide suggested. “We just don’t know what’s going to happen at any given time. Just being here at all is a risk.”

I asked whether there had ever been any close calls during tours of the island. “Well,” she said, smiling grimly, “we were standing close to the crater once, when it started throwing out these huge rocks.” She gestured with her arms, measuring out three or four feet. “Yeah,” she said, spotting the unease on my face, “at which point we started heading back, pretty quickly, to the boat.”

By now we were heading back to the boat ourselves, and just as well – at that moment, a deafening rumble rose up from where we had just come from. I ducked a little, and glanced around to see a massive lahar (volcanic mudflow) crashing down the cliffs, tonnes of rocks smashing into the earth around the crater lake.

My heart fluttered, and I looked around to check that everyone was still with us. I glanced at the guide, who was looking slightly panicked. “That’ll be the dynamite we put here yesterday to impress you,” she joked. “But seriously, this place is just too unpredictable”.

After the events of the island, I embraced the queasy sensation of the rough, rocky seas over the volatile impulses of the volcano. I wouldn’t miss it – it wasn’t the kind of place that you could stay on for long. But I’d never forget my brush with ‘the dramatic volcano’.