Where can you see wild gorillas in Africa? Our expert lists 10 countries for watching different species of gorilla, including mountain gorillas and western lowland gorillas...

Cross River gorillas are found only in Cross River State, where the government has invested heavily in tourism infrastructure (for example, the spectacular cable car up to the Obudu Cattle Ranch Hotel). However, the chances of seeing gorillas here are still slim. Their total population now consists of 200 to 300 individuals, spread across an area of 3,000 square miles, which includes Afi Mountain, Mbe Mountain, and the Okwangwo Division of the Cross River National Park. For this reason, scientists are cautious about habituating any.

But visiting the habitat does help to conserve it, and two outstanding primate sanctuaries and reintroduction projects – Pandrillus for drill monkeys and chimpanzees, and Cercopan for numerous monkey species – are based in Calabar. 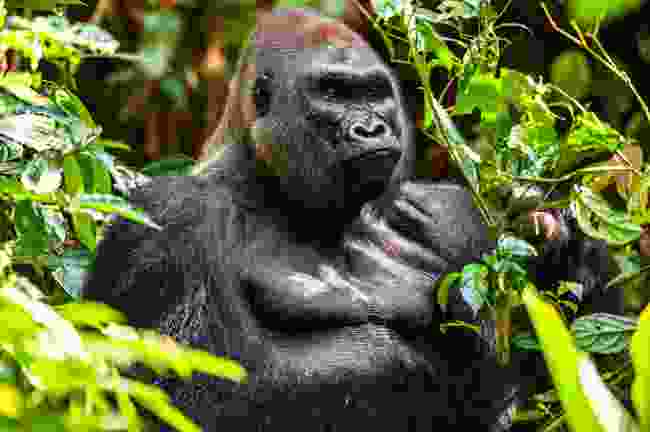 Cross River gorillas live in the English-speaking part of Cameroon bordering Nigeria, in small pockets of forest that are the focus of a conservation project but with no tourism component yet.

Western lowland gorillas live in the French-speaking part of the country. The WWF is developing ecotourism in Campo-Ma’an National Park in the south-west, but it’s early days so gorilla viewing is not guaranteed.

Limbe Wildlife Centre cares for about 15 western lowland gorilla orphans with a long-term goal – funding permitting – of rehabilitation back into the wild.

More rescued western lowland gorillas – orphans of the illegal bushmeat and wild animal trade – can be seen in forest enclosures at Mefou National Park, located close to the capital city of Yaoundé.

The Monte Alen National Park is a spectacular forested park, and its rugged terrain served to protect it from commercial logging. As yet, there are no habituated western lowland gorillas. The tourism infrastructure is in early stages of development, and trained locals have started to conduct guided day treks. 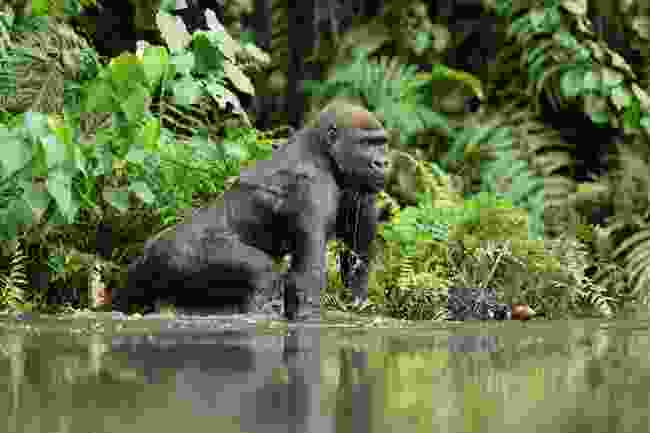 Gabon made a bold bid to diversify its economy by creating 13 national parks in 2002, most of them containing gorilla habitat. The western lowland gorilla habituation programme at the Mikongo Conservation Centre in Lopé National Park was terminated in 2010. But although visitors are no longer taken on specific gorilla-spotting treks, visitors can still see them while looking for other wildlife.

Moukalaba-Doudou National Park has some of the highest densities of gorillas, and an ecotourism project has begun there with help from The Gorilla Organization.

Loango National Park offers the rare combination of rainforest and Atlantic beach, where hippos have been seen surfing, whales and dolphins surface offshore and the forests are home to gorillas, chimpanzees and forest elephants.

Western lowland gorillas are found only in the Cabinda enclave, the part of Angola north of the mouth of the River Congo. There is little in the way of tourism infrastructure, but if it's adventure you want..!

Since the loss of the habituated Lossi gorillas to Ebola in 2002, the nearby Odzala National Park now presents one of the best options for seeing western lowland gorillas. It's currently home to two habituated family groups that can be seen by visitors. They can also be seen from hides as they visit bais (open clearings in the forest).

The most famous bai is Mbeli Bai, in Nouabalé-Ndoki National Park, where about 100 gorillas have been monitored by the Wildlife Conservation Society for a decade; gorilla groups can be seen wading into the marsh to forage for water plants alongside forest elephants, buffalo and antelope such as sitatunga.

Rescued western lowland gorilla orphans are being rehabilitated back into the forest in the Léfini Reserve (two hours’ drive north of Brazzaville), where visitors can view silverbacks on a forested island from a boat. 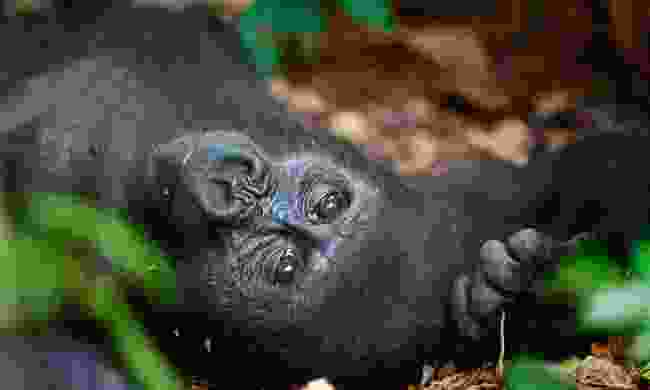 One of the best places to track western lowland gorillas is Bai-Hokou in the Dzanga-Ndoki National Park. A WWF project has succeeded in habituating a group, and a calm contact is likely, though the dense forest and low light beneath the canopy make photography challenging. 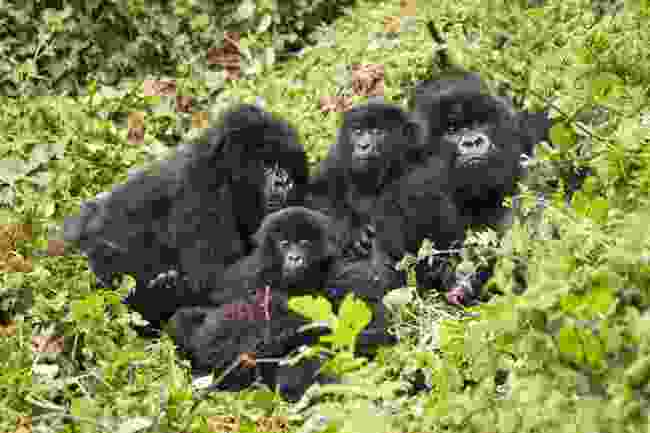 Rwanda is about the size of Wales, with good main roads (making it quick to get around) and a relatively well-developed infrastructure.

But it is the work of Dian Fossey, as dramatised in the film Gorillas in the Mist, that really makes Rwanda’s Volcanoes National Park many people’s first choice for a mountain gorilla safari.

The professionalism and kindness of the guides – many of whom have spent decades helping visitors cope with steep slopes, stinging nettles and nerves – makes every muddy, gasping step that bit easier. But when it's sunny, and the gorillas are only a short stroll from the park boundary, people tend to wonder what all the fuss is about! 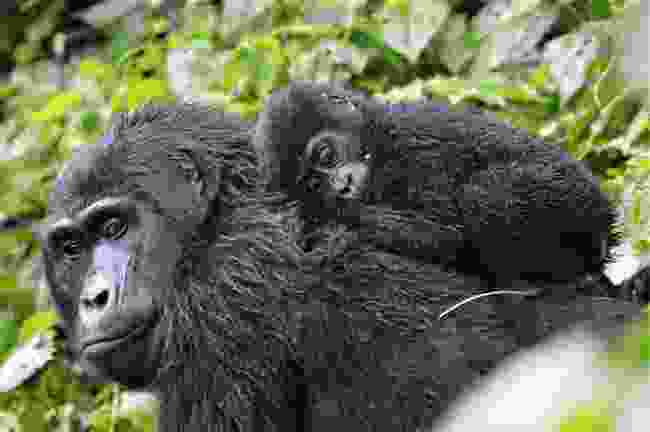 Second in popularity to Rwanda, the two gorilla parks in the south-west of the country offer different experiences. Mgahinga National Park is part of the tri-national Virunga Conservation Area, and its habituated gorillas often cross into the Democratic Republic of Congo. However, climbing to the top of Mt Sabinio, where Rwanda, Uganda and DRC meet, is an outstanding way to see the whole mountain gorilla kingdom – an island of forest surrounded by a sea of densely populated farmland.

Just to the north, on dramatically winding roads, Bwindi Impenetrable Forest National Park is more biodiverse and at a lower altitude. It has four groups well-habituated for tourism, and two more are being habituated to cope with demand. Some taxonomists regard the Bwindi gorillas as a separate sub-species of eastern gorilla – the lack of hair on their brow easily distinguishes them from their shaggier Virunga cousins.

One of Uganda’s real plus points is the range of other activities on offer: combine your gorilla tracking with the country’s other national parks and adventurous activities, from hiking the glaciers in the Rwenzori Mountains to white-water rafting on the Nile. 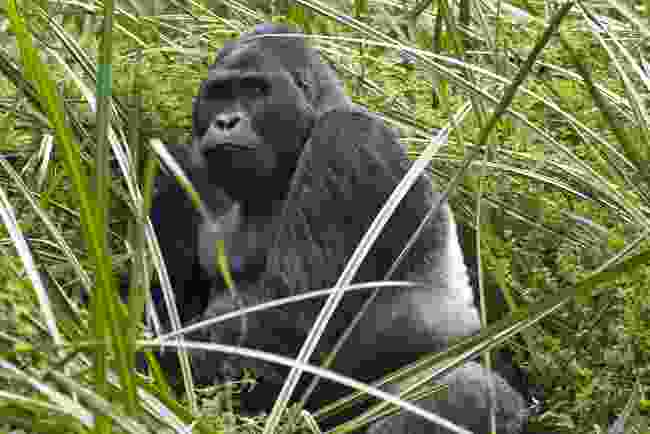 Three of the four sub-species are found in the Democratic Republic of Congo. Gorilla tourism with habituated groups began here in the mid-1970s, in Kahuzi-Biega National Park, a stronghold of eastern lowland gorillas, and this park still offers one of the best gorilla-viewing experiences. Bukavu is the nearest town (with some beautiful lakeside hotels), but check the security situation if entering DRC from Rwanda.

Mountain gorilla tourism in Virunga National Park is also excellent, if security allows. Things have improved since the early 2009 arrest of rebel leader Nkunda, but the area is still unsettled. However, even during the troubles many people visited the gorillas at Djomba on day trips from Kisoro, Uganda, because permits were available in the DRC and sold out in Uganda. Take advice on the spot – it can change from one week to the next.

Some western lowland gorillas survive in the far west of DRC in the beautiful Madiakoko Mountains, Bas-Congo, crossing back and forth from Cabinda (Angola), but you’d be a pioneer tourist here.

More on the world's gorillas:

Why Rwanda’s price hike for seeing gorillas is a disaster

Searching for gorillas in Brazzaville, Congo

Kate Humble goes gorilla-watching in the Democratic Republic of Congo