8 secret spots along the Danube worth seeking out

Covering 10 countries and stretching from Germany to Ukraine, there's so much more to the Danube than its popular tourist destinations. Here are eight secret spots along the river well worth seeking out...

It officially starts its marathon journey in the stately grounds of Donaueschingen Castle where the statue of Mother Baar points the way east to her child, the Danube. Almost 3,000km later, the mighty river drains into the Black Sea.

Whether following the Danube by car, bike or boat, wind your way through fairytale landscapes of dark forests, steep-sided gorges and historic settlements. Some of Europe’s most enchanting cities are found along the way: Passau, Vienna, Bratislava, Budapest and Belgrade. to name a few. But there’s so much more to the Danube than these popular tourist destinations. Here are some of the Danube’s best-kept secrets... 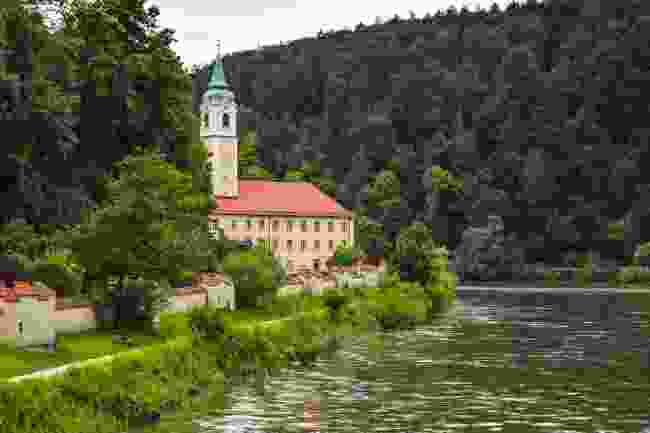 Just beyond the village of Weltenburg, the Danube creates a watery noose as it doubles back on itself. A Benedictine monastery stretches across the neck of the peninsula, an imposing Baroque building with a sumptuous 18th-Century chapel, and more surprisingly, a brewery. Marvel at the grandeur of St George, then head to the cloister courtyard to indulge in the monastery’s very own Barock Dunkel. Relax on the shingle beach that fronts the abbey or dip your toes in the Danube before boarding the boat that squeezes through the narrow limestone gorge to Kelheim.

Amble back along the far bank, climbing to the viewing platform to get a bird’s eye view of the magnificent monastery before taking the rope ferry over to Weltenburg Abbey again. 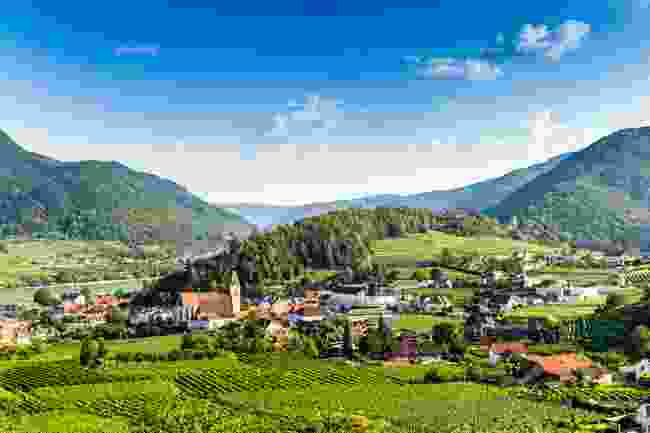 An idyllic Danube valley, hire a bike in Melk and cycle along the waterside to Krems to revel in its beauty. Before pushing off, take time to visit Melk Abbey, a vast monastery that sits on a rocky outcrop high above the river. The chapel is dripping gold, while the Potteresque library, with its ceiling-to-floor bookshelves, holds medieval manuscripts.

In summer the riverside path between the historic towns is scented with the fruit of apricot orchards. Above, the hillsides are striped with vineyards (UNESCO listed) and topped with romantic castles.

Before returning to Melk, explore the opulent churches and resplendent Baroque architecture of Krems – a Vienna in miniature – then cycle  back along the opposite bank to Melk for a different perspective of this enchanting river valley. 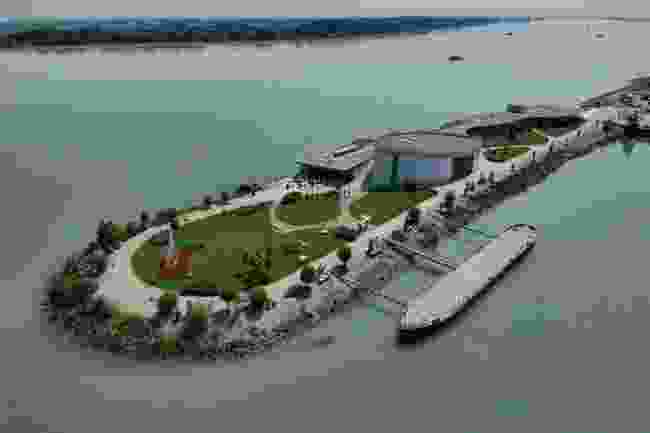 Bratislava is becoming a firm favourite with visitors, with its quirky street sculpture and hilltop castle, but few know of the chic, contemporary art museum that stretches across an artificial island 15km downstream.

Hire a bike in Bratislava and follow the river banks to Čunovo. Alternatively, take the Number 90 bus from the Slovak National Theatre, or one of the sightseeing boats. The sleek, ship-shaped building makes quite a statement on the edge of the water, the playful and colourful waterside sculptures contrasting the simple curves of the dazzling white museum. Enjoy the island and rooftop gardens before heading indoors to a bright and airy space filled with modern art and installations that will challenge and stimulate all art lovers.

4. Hungary: The golden towns on the Danube Bend 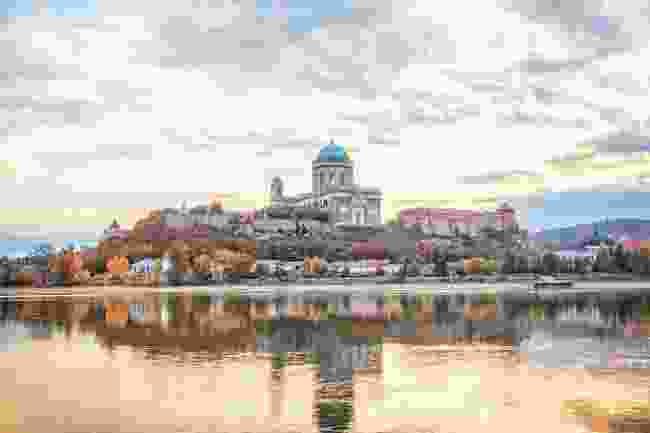 Just a short distance from Budapest, you can visit four exquisite riverside settlements that echo the splendour of the capital, but with fewer tourists.

From Budapest take the hydrofoil to Esztergom, a city of faded elegance and grandeur. Explore the great basilica on Castle Hill, flanked by the city walls, and the streets of stately ecclesiastical buildings. Stop off at Visegrád and climb up to the triangular walled castle, where you’ll be rewarded with spectacular vistas of the Danube and the ruined Royal Palace at the foot of the hill.

A half-hour train ride from Budapest, Vác is the prettiest of the Danube Bend towns, with its riverside promenade and squares surrounded by churches, palaces, colourful architecture and chic cafes. Indulge in a dobos torte or a vanilla-layered Kreme.

A short train ride from Budapest, Szentendre has a Bohemian feel to it with its low-lying pastel cottages, cobbled streets and craft shops. Climb the hill to the church and take in the red roofs of the town in its lovely setting between the Danube and Pilis Hills. 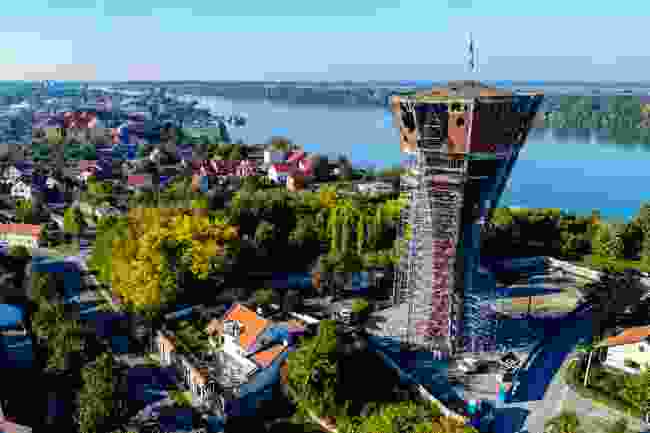 Exploring Vukovar is a bitter-sweet experience. The handsome Baroque town was badly damaged in the 1991 War, and although almost three decades have gone by, the Battle of Vukovar still looms large in the memory of the population and in the remaining bullet-holed houses. The badly damaged water tower has been left as a reminder of a brutal war that left the city under siege for 87 days.

Just 4km from the town centre, at the Memorial Centre of Homeland War Victims, the neat rows of white crosses bear witness to the deaths of almost a thousand men, all killed within the space of a few months. It’s a sobering and fascinating part of Croatia that couldn’t be more removed from the laid-back, sun-kissed Adriatic Coast. 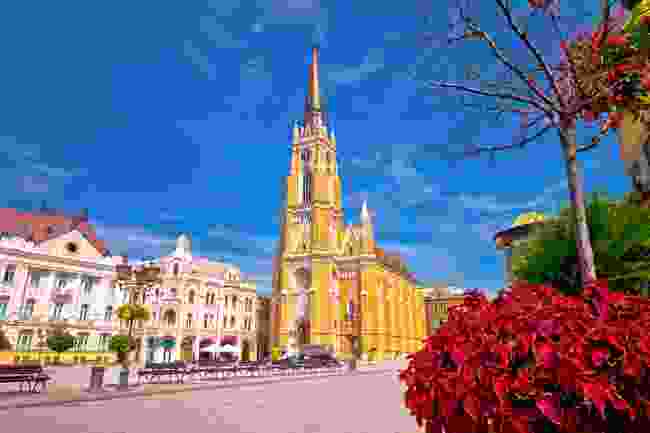 Less than 80km from Belgrade, Serbia’s second city has all the history and urban chic of the capital minus the hectic bustle. Dominated by Petrovaradin Fortress, the historic quarter of Stari Grad sits at its feet and is packed with museums, monuments, restaurants and shops. Come in July to experience Exit, Novi Sad’s world-class music festival at the fort.

Across the river, the pedestrianised Zmaj Jovina has a chilled vibe, lined with outdoor cafe seating. It leads to Freedom Square, Trg Slobode,  surrounded by handsome Habsburg-era buildings and the towering Gothic revival church, Name of Mary. 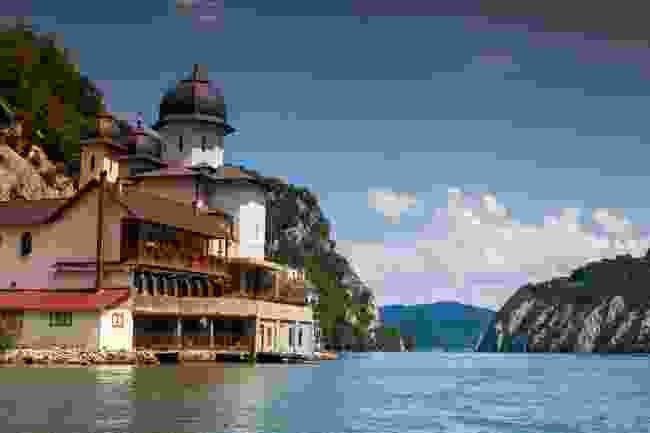 The Monastery at the Iron gates national park (Shutterstock)

A third of the Danube snakes through Romania, one of the most haunting stretches of the river. East of Moldova Veche, the waterway spreads out into a glassy bay of Danube blue before squeezing through the narrow gorge that separates the Carpathian Mountains from the Balkan foothills in Serbia.

Beyond a second bay at Dubova, the river narrows again. Here, a monastery of onion-domed turrets teeters on the water’s edge and the foreboding, larger-than-life  rock sculpture of Decebalus, the last King of Dacia, looms over the water.

20km on from the port city of Orșova, the mighty Iron Gate harnesses the power of the Danube with two hydro-electric power stations. Finish your trip at Drobeta-Turnu with its medieval fortress and fable-book water tower. 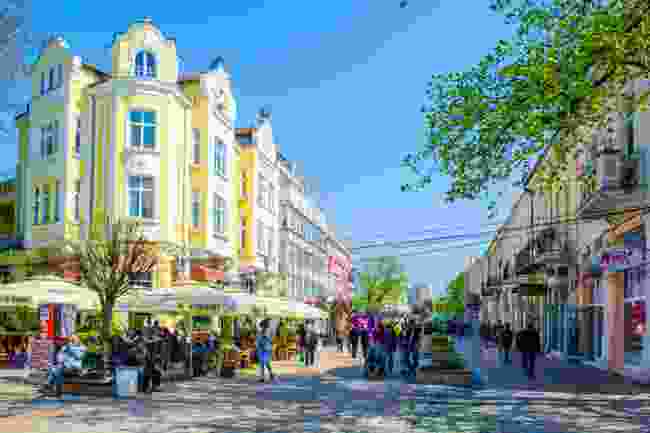 Inhabited since Roman times, Ruse is one of the most attractive Danube cities east of Vienna. Neoclassical, Baroque and Rococo buildings jostle for attention on Aleksandrovska Street. Don’t miss the majestic Sava Ognianov Theatre in Svoboda Square or the quadrangle of the old city centre surrounded by grandly ornate buildings, including  the Rouse Historic Museum and the 17th Century Holy Trinity Cathedral. 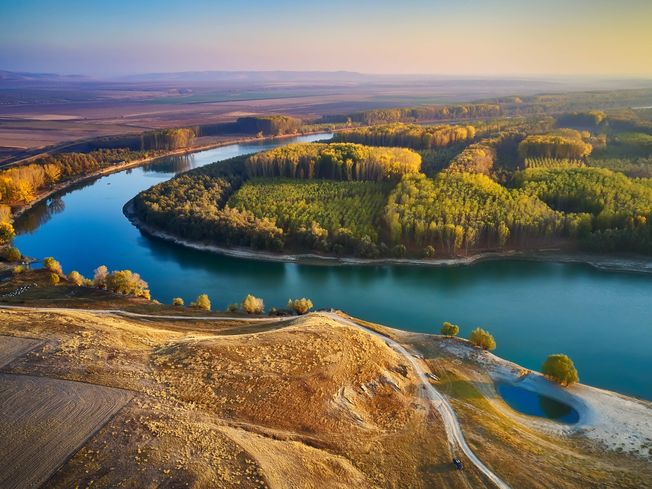 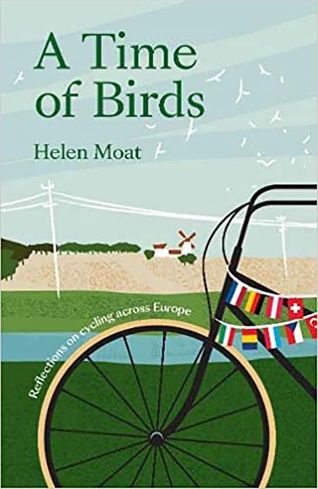 Freelance travel writer and author, Helen Moat cycled from Europoort in the Netherlands to Istanbul in 2015, writing for Wanderlust along the way.

The book about the journey, A Time of Birds,  was published by Saraband in April 2020. Part-memoir, part travelogue, her story celebrates the stories of the people she met along the way, the beauty of Europe’s rivers and its rich diversity of history and culture.

The 25 best rail journeys in Europe