When too much wildlife is never enough

As they travel around the world with their young family, the Cagols have discovered there is one thing their kids never get tired of – spotting wildlife

The kids had enjoyed Kruger National Park in South Africa so much, we decided that a visit to Etosha in Namibia was an absolute must. From all accounts there was even more wildlife here and more easily spotted. We completed our formalities at the entrance gate and started along the corrugated road towards our camp. Within 30 minutes we had spotted zebra, giraffe, warthog and ostrich. Things were looking good.

Etosha is dominated by a large mineral pan. It is dry and short on water and wildlife congregates around water holes, both natural and man-made. At the first two waterholes we spot giraffe, zebra, springbok, ostrich, warthog and oryx, all mixing together beside the waterhole.

At the third waterhole there was a large herd of elephant, zebra and giraffe as well as warthogs, ostrich and springbok. The kids were buzzing from seeing do many animals around one waterhole. We parked the car, switched off our engine and just watched one of Africa's best wildlife spectacles. 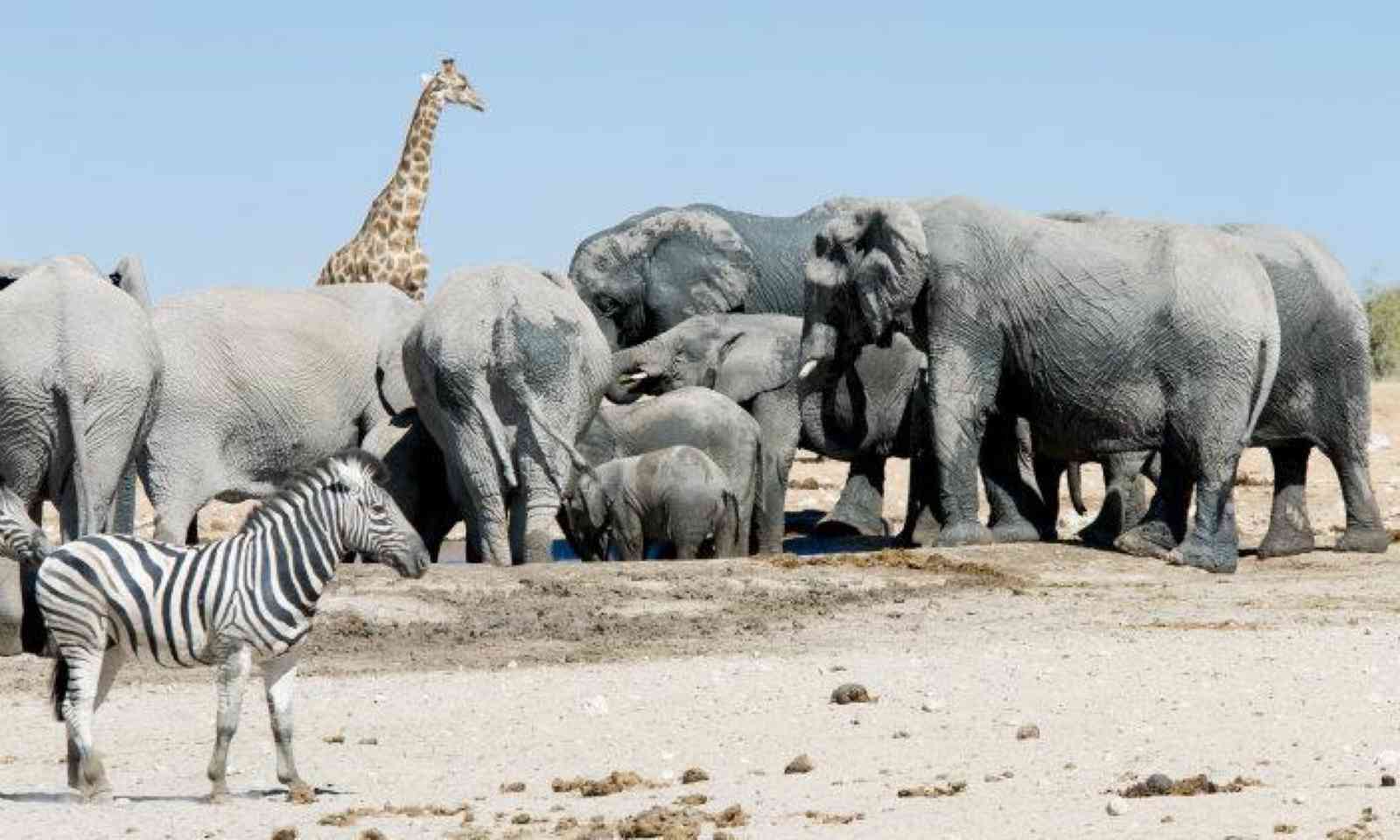 We were spending the night in Olifantsrus. In the 80’s Olifantsrus had been an elephant abattoir. Scientists were convinced that elephant numbers were growing at an unsustainable rate and slaughtered 500 elephants. The meat was tinned and sold alongside the tinned corn beef in the supermarkets. The crane and apparatus can still be seen in camp and give a chilling reminder of the slaughter.

The scientists were wrong, of course. A few years later they discovered that elephants only have an impact on the vegetation a radius of 200 metres around a waterhole. Now Olifantsrus is all about conserving animals. It has a hide, which is lit up at night, and after dinner the kids and I used it to watch a white rhino drinking from the waterhole, only five meters away.

The next day we head out of camp, and the kids are excited about the prospect of seeing even more wildlife. We see plenty of zebras, elephants, springboks and oryx on the road. And at the Okondeka waterhole, we spot over 500 animals on the salt pan. There wasn’t the same diversity of species that we had seen the day before, but the sheer number of animals was mind blowing.

It gets bitterly cold in Etosha at this time of year, so we were glad to have booked chalets for the next four nights – two nights at Okaukuejo and two nights at Onkoshi. Our rooms at Okaukuejo are a stone’s throw away from the waterhole and we watch giraffes, zebras and springboks all take their turns at the waterhole from the comfort of our deck.  As we ate our dinner, a herd of elephants, black rhinos, giraffes and wildebeests came down to drink, silhouetted against the setting sun. 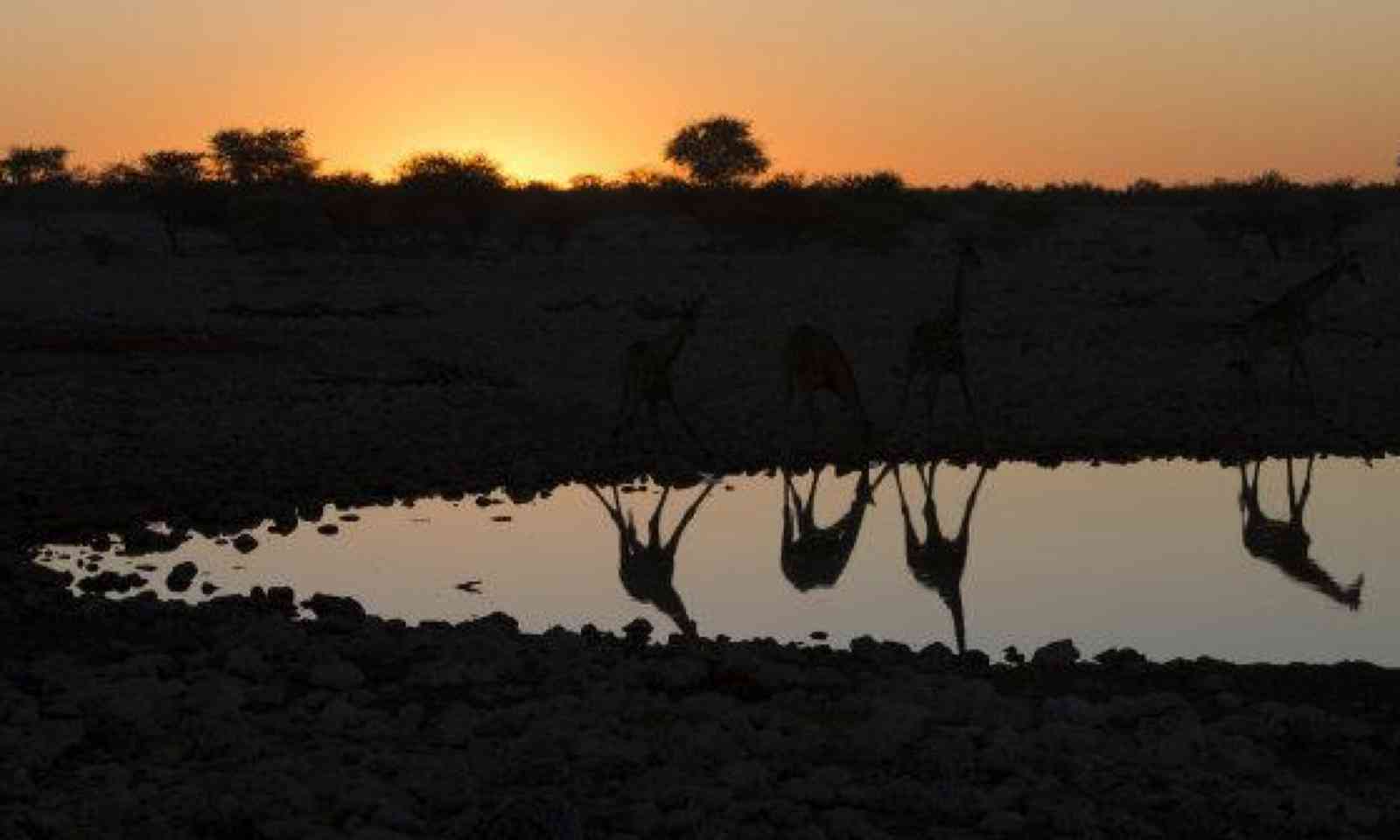 The next day we woke up and discovered that the Tooth Fairy had been. Luca had lost another tooth and was pleased to discover that the tooth fairy visited the Etosha pan and would use his tooth in place of elephant's tusks. We spent the morning driving around the park. We saw lots of game again but no big cats. We were all slightly disappointed.

Edwina and the kids spent the afternoon splashing in the pool at the camp before returning to our chalet to watch the elephants come in at sunset for a drink at the waterhole. Later in the night, after the kids went to bed, five rhinos made their way down to the waterhole. Rhino are solitary creatures, so it was a very special moment. We went to sleep that night listening to the grunt of two rhinos as they faced off each other.

The next day the kids were desperate to see lions, so I Googled ‘Best waterholes for lions in Etosha’ and planned a route using Google’s suggestions. The first waterhole they suggested had nothing, but at the second we spotted two lionesses, relaxing in the sun. The kids were surprised by the number of zebra and wildebeest drinking at the waterhole while the lionesses were so close. I explained that sometimes their need for water is greater than the risk of being eaten. 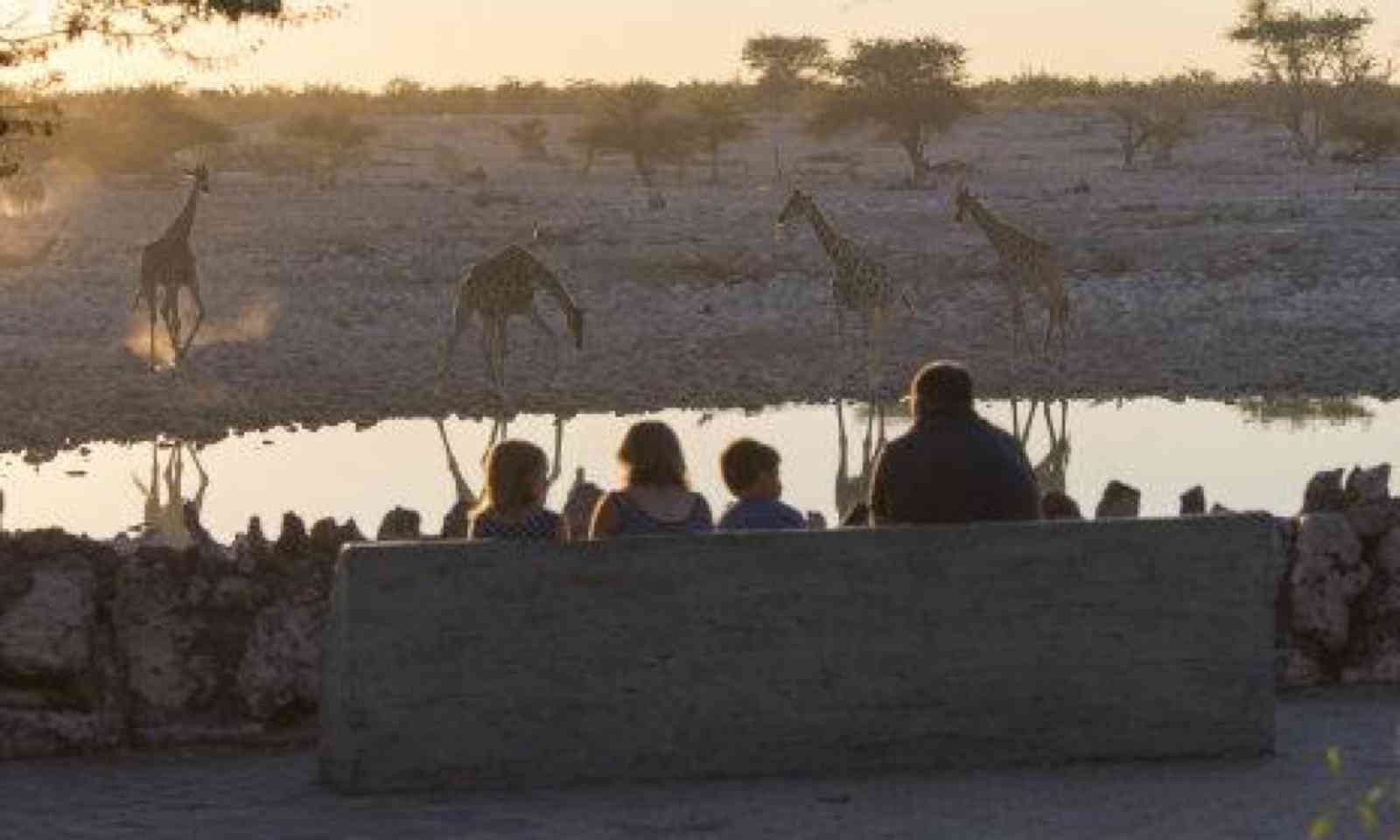 We moved on to Onkoshi camp, our base for the next two nights. The setting is stunning, with the chalets perched on stilts directly next to the saltpan, so we decide to rest here, using it as an opportunity for the kids to catch up with their schoolwork.

While they watched a movie about Mandela – something they’d been pestering to do after visiting Robben Island in Cape Town – Edwina and I watched the sun set over elephants on the saltpan and hyenas slink out of the shadows as night fell.