What children really think about adventure travel in Africa

The Cagols have just spent a year travelling the world. 11-year-old Madeline shares her diary entries from their last week in Africa, revealing what she really thought about her family’s big adventure.

We woke up in the dark again in Iringa (Tanzania) and drove to the border post to get into Zambia. At the border post, me, mum, Arabella and Luca were waiting for dad to get the import permit needed for our car.

Three boys came over and started talking to us. The youngest boy was 11. The second oldest was 12. And the oldest was 15. The boy who was 11 kept making ‘heart’ signs with his hands and saying that he loved me. He said he wanted to take me for a picnic and go for a walk. I just looked at my shoes and ignored him. 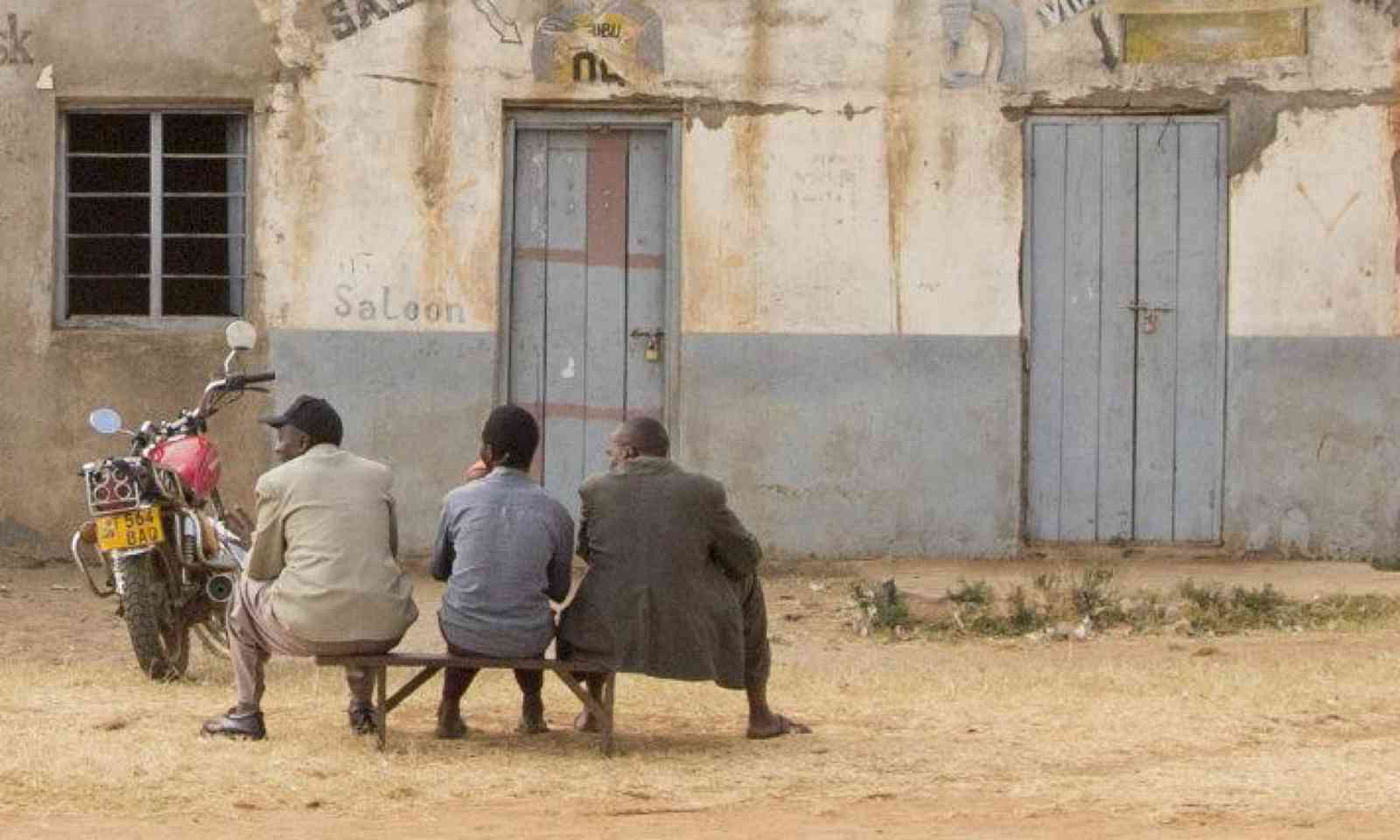 The boys were also peeking in our car and asking for us to give them our CDs. We were desperate for dad to come back – he took ages – and jumped straight back into the car when he did. The boys asked for biscuits, so mum gave then some packets of chilli nuts we had.

It was dark when we got to Mpika. There was a TV in our cabin, so we got to watch a movie, Hotel Transylvania.  It was the first time we had watched TV in four months.

We were meant to set off 5.30 am today but we were delayed by a punctured tyre. The security guard directed us to a house where we had to wake up a man to borrow his air pump. Dad had the tyre fixed by 7am and we were on the road again.

Luca got to have a Triple Decker Pizza for lunch, something he had wanted since seeing one in Kruger National Park.

In Lusaka, dad got fined for turning into a wrong lane, and the police lady had to come in our car to show us the place to pay the fine and make sure dad paid it. 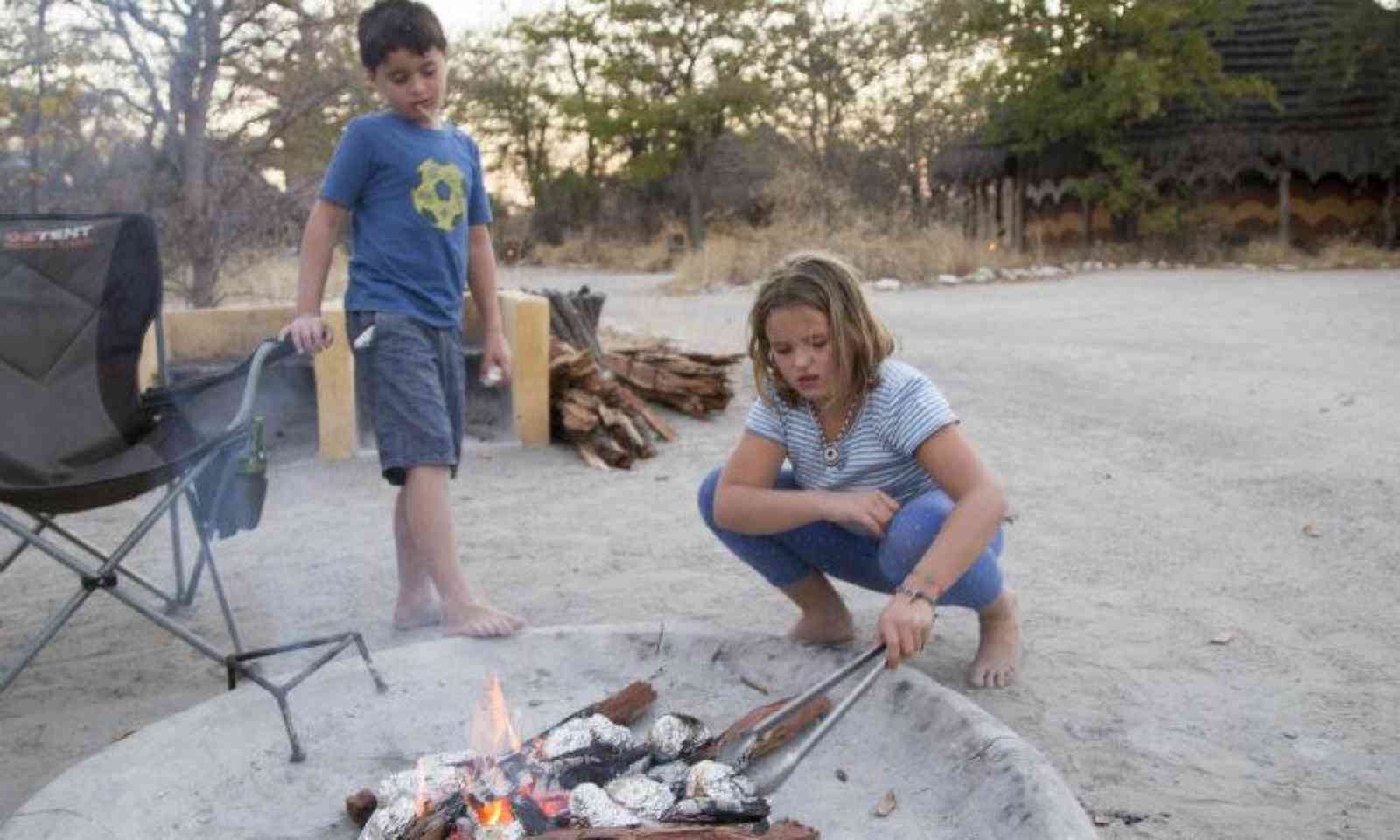 Getting the fire ready to cook breakfast (Edwina Cagol)

We arrived at Moorings Campsite Mazabuka and Monz in southern Zambia in the dark. Mum got mad with dad for parking in the wrong place. When mum moved the truck he said it doesn’t matter where it’s parked because we are just sleeping and leaving early. Me, Arabella and Luca played Uno and ignored them.

Today was not a long day’s drive, but we did have a border crossing into Botswana. At the border post, we had to cross the Zambezi river on a ferry, which was quite exciting. They are building a bridge across the river, but it is only half done.

Dad said the Zambezi flows all the way to Victoria Falls, so if we fell in the river or if the ferry got out of control we would go over the waterfall. It was my favourite border crossing of the trip so far. 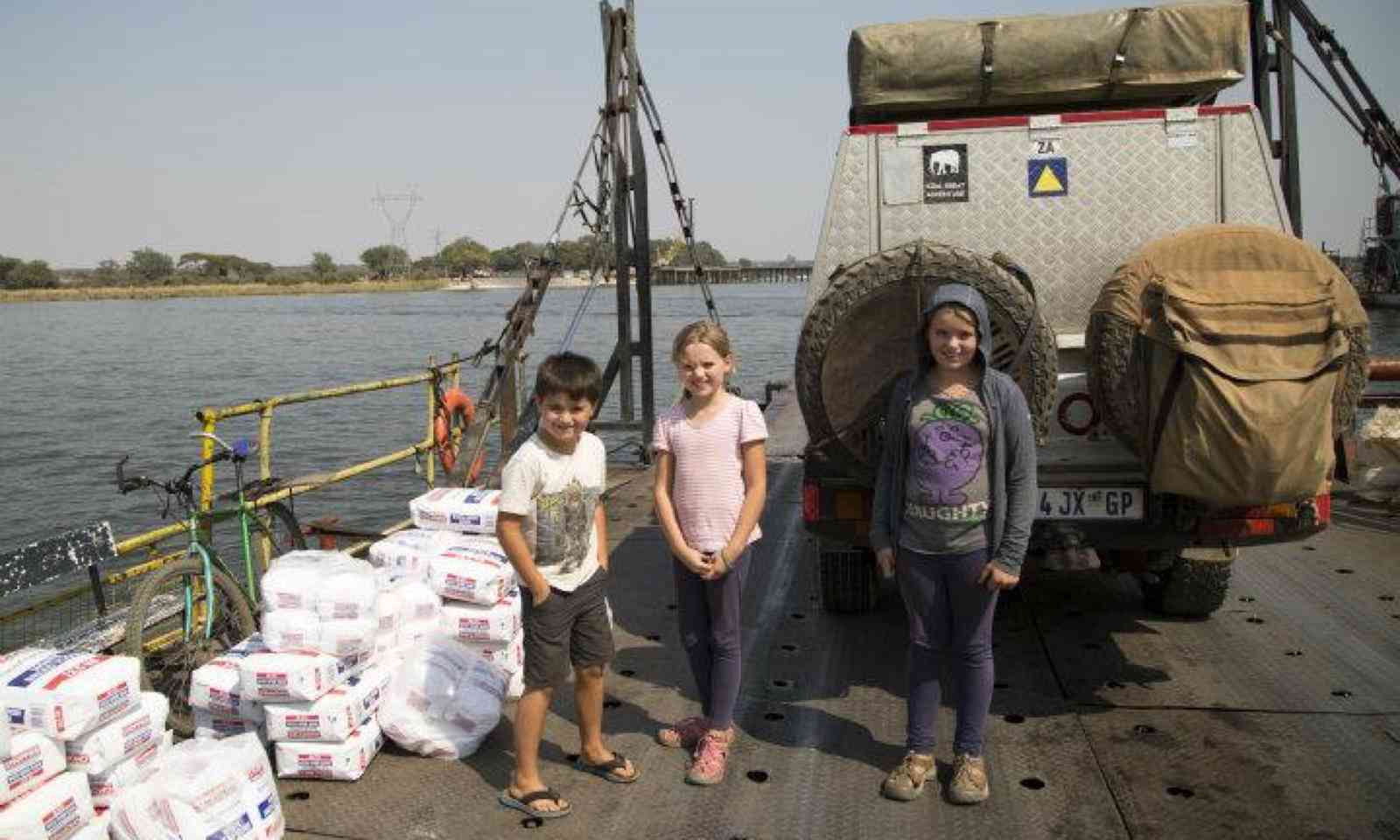 Our campsite, Senyati Safari Camp, had a hide where we could watch elephants around a waterhole. When I was climbing up on the high bench near the window I accidentally fell off and some rude people told me to ‘shhhh.’ One of them told my dad to ‘shhhh' too and dad said ‘Don’t you shhhh at me.’ A nice lady in the hide patted me on the arm when she left and told me not to worry, those other people were just plain rude.

Later that night, me and Arabella surprised mum and dad by bringing them a beer as they sat around the fire together.

Today we have a five-hour drive ahead of us. A lady at the camp had driven along the same road in the opposite direction and saw five elephants. We saw 60 elephants and two sables. 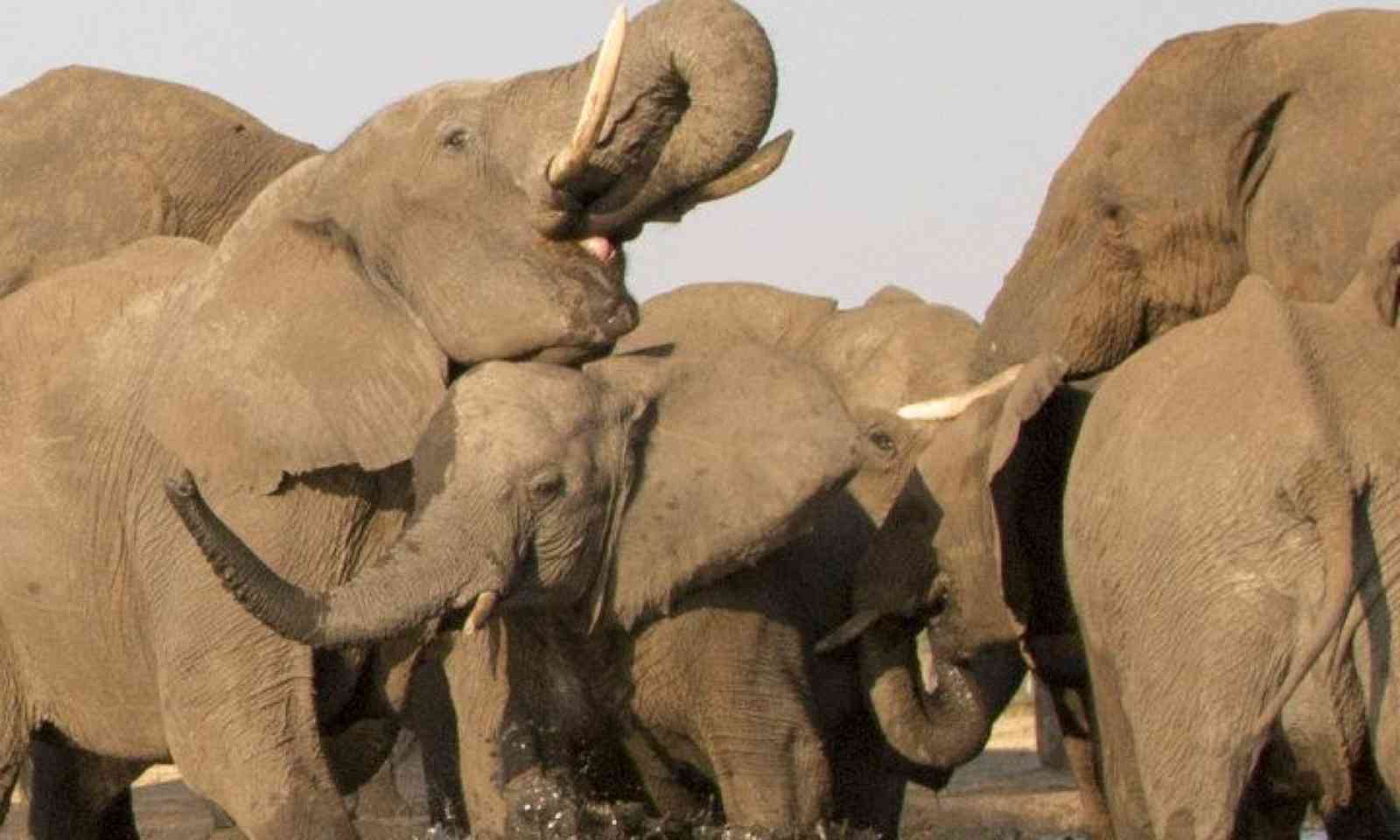 Elephants. Lots of them (Edwina Cagol)

When we got to Planet Baobab, our camp for the night, we had lunch and then got into our togs to go swimming. Some boys from Zambia were swimming in the pool and we played with them until the boy who was five bit me on the finger and spat the Coke he was drinking into the pool.

Today we stay spent the whole day in the pool at Planet Boabab while mum and dad cleared all the rubbish out of the car and repacked it. 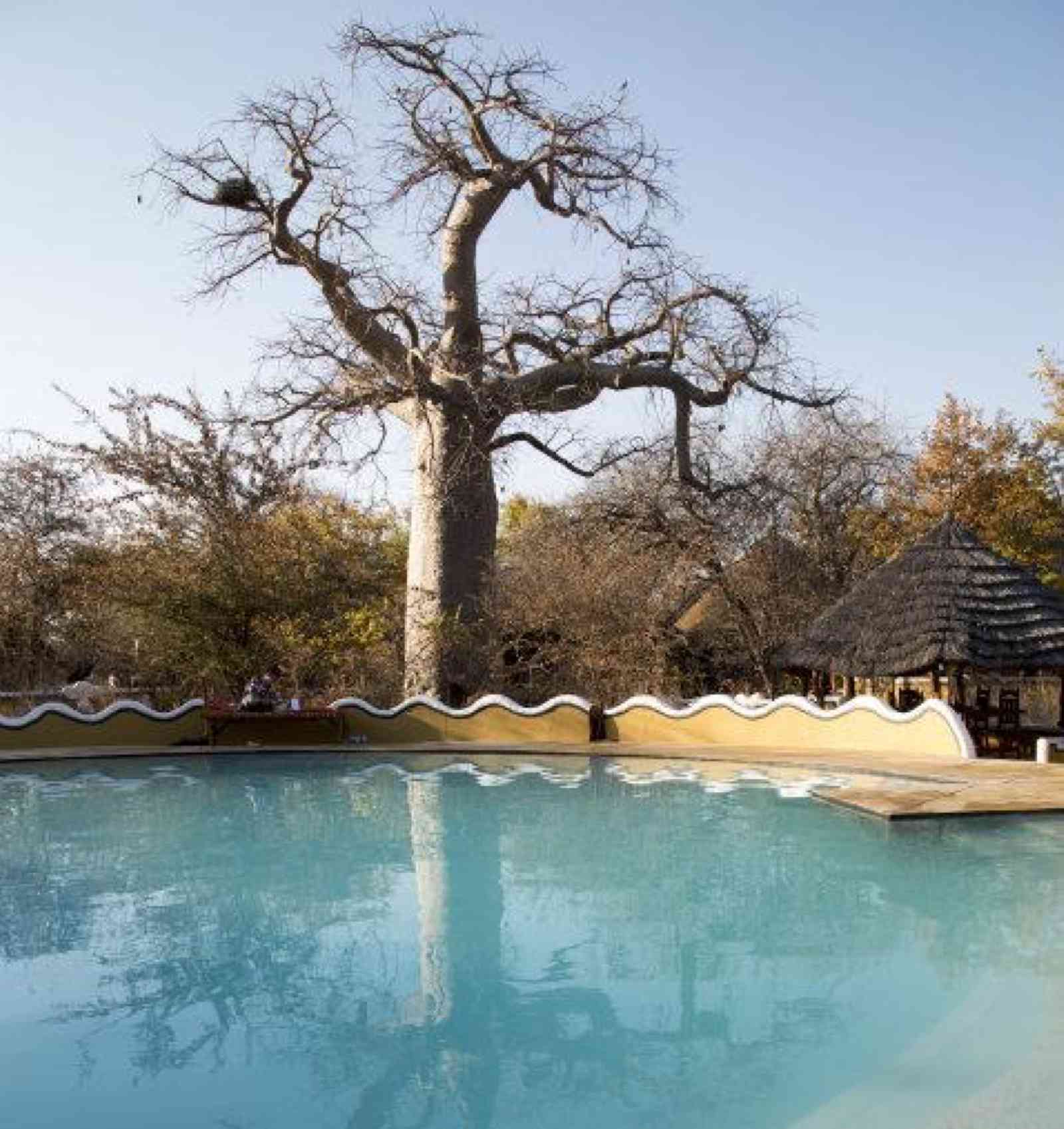 Today we drove to Nxai Pan to see the famous baobab trees. Mum wanted a go of driving on the sandy roads, and dad let her. She overheated the car and me and dad thought she had broken it. 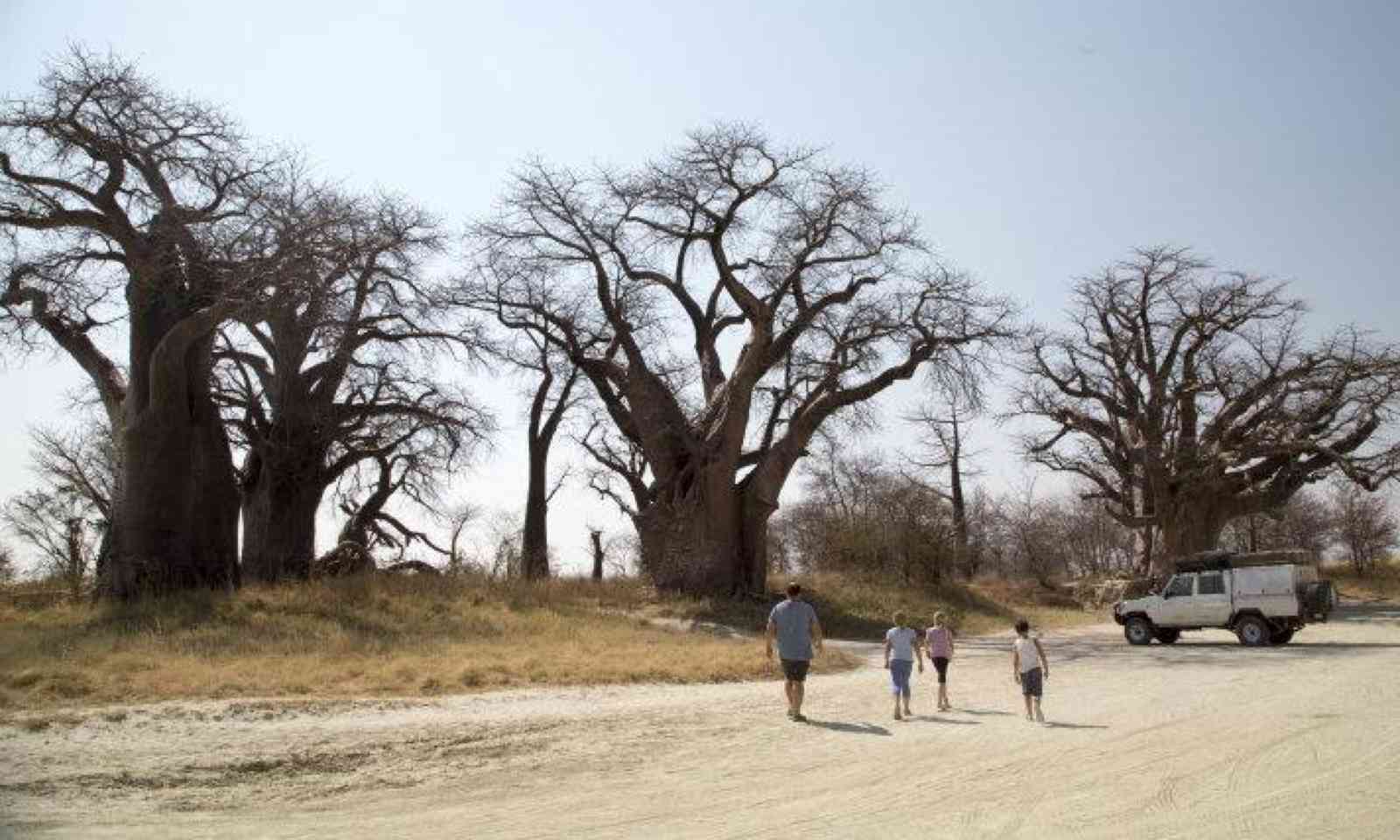 We reached our camp for the night just after lunch, so we had time to go on a safari. We saw jackals, springboks, elephants, steenboks, bat-eared foxes, oryx, wildebeest and ostriches.

Back at the camp that evening, two elephants strolled into the area. Mum, Luca and Arabella were in the toilets at the time, and me and Dad said they were going to get a big fright. We were right. They came out and screamed. 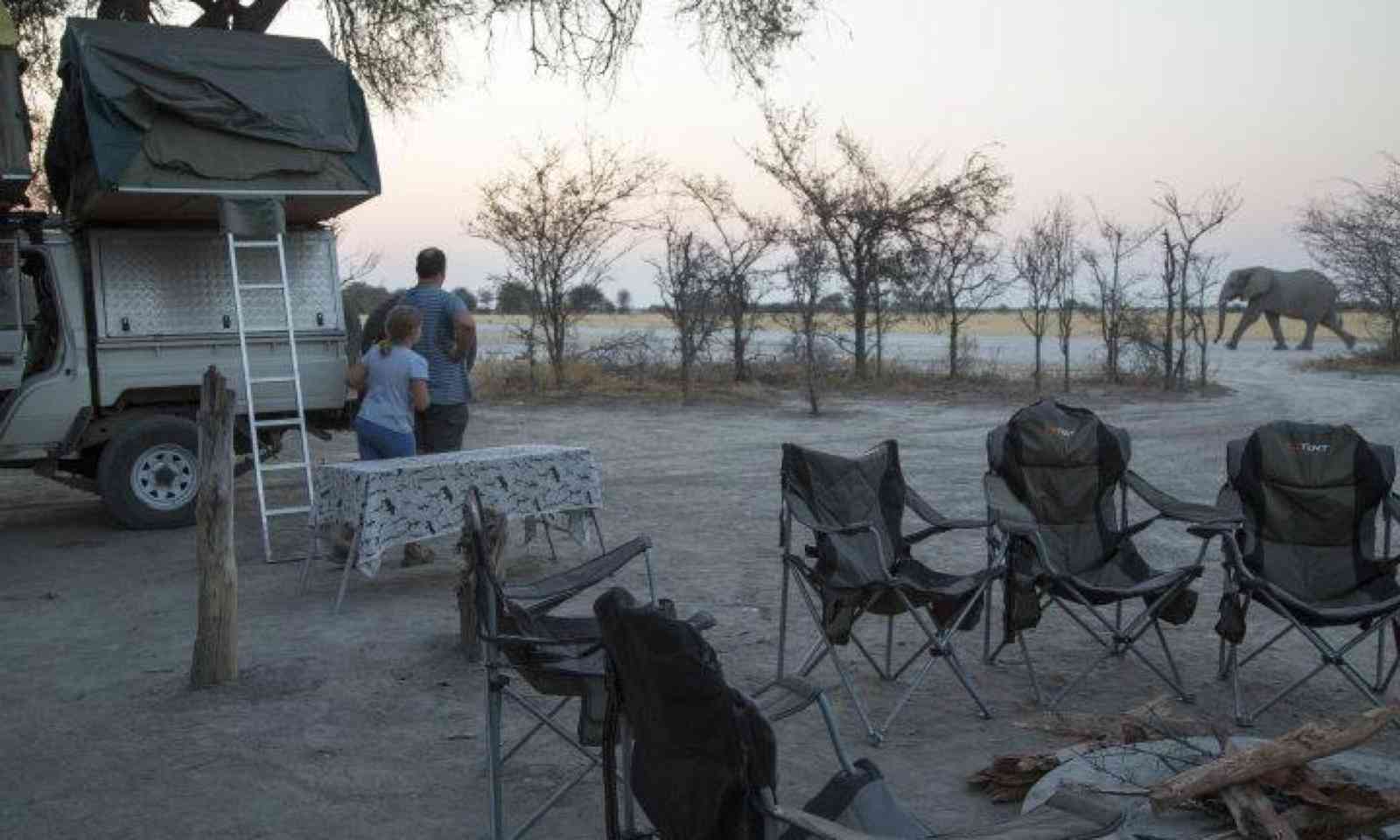 Tonight was our last night camping in the bush, which was kind of sad. Arabella lit the fire, mum cooked tea, and me and Luca laid out the party food. We had crisps, chocolate, biscuits, toasted marshmallows and a can of fizz. It was like a party, but without the music.

We got up early for one last sunrise safari. We saw an owl and a lioness with her cubs. Dad said they looked like they were only a month old. , We got the car washed in Francistown and then headed for the South African border and Johannesburg. 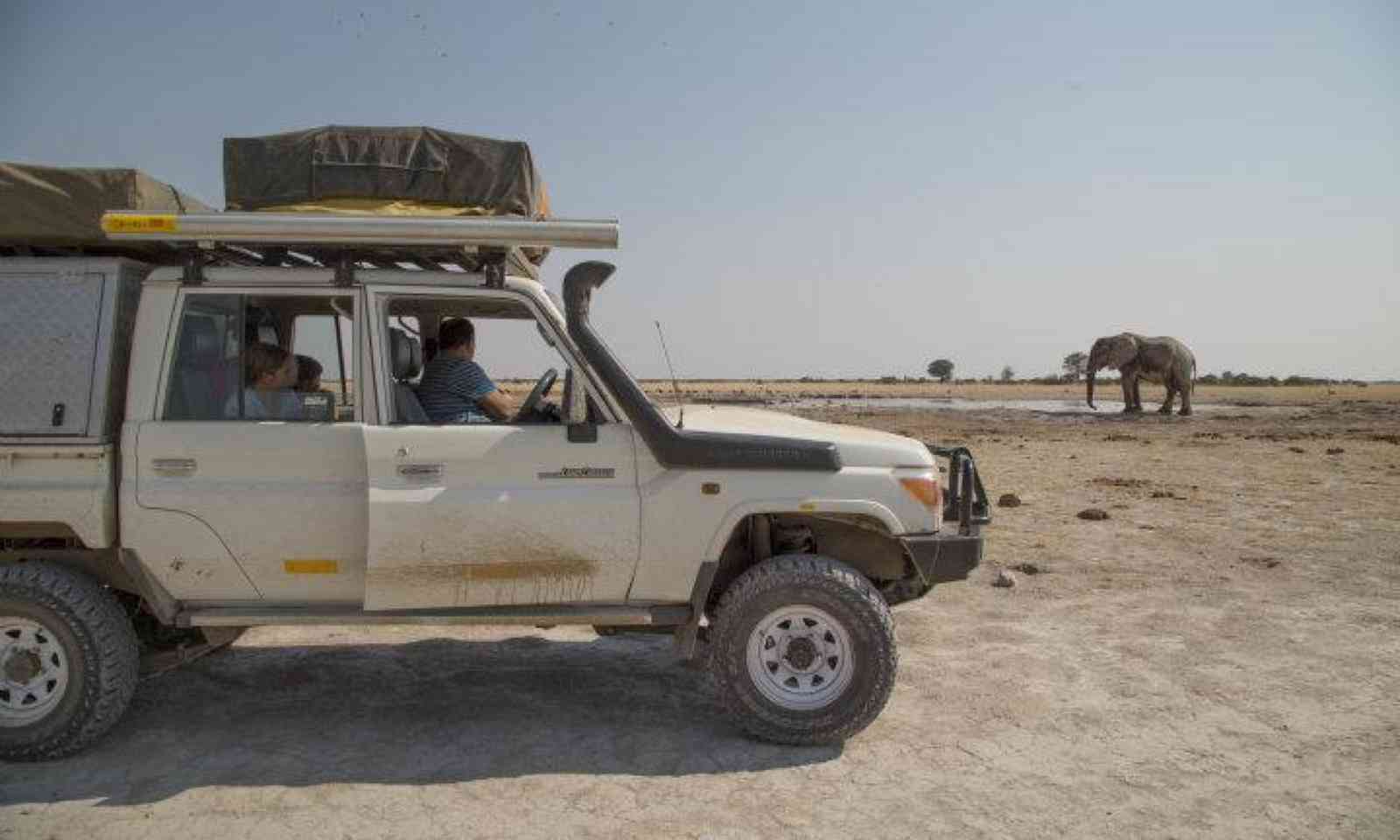 In Johannesburg, we said goodbye to our car, ‘The White Elephant’. I cried a little bit when dad took it away to be sold. Not just because I had so many good memories with the car. It also meant our big African adventure was over and we were finally going home.

Edwina and Mauro Cagol are travelling around the world for a year with their three young children. To find out more about their adventures, visit www.offexploring.com

Main image: The Cagols on the road in Southern Africa (Edwina Cagol)