These pieces were submitted by Wanderlust readers for our monthly writing competitions. They're written by amateur travel writers - but we reckon they're just as good as professional pieces!

Think your writing is equally great - or even better? Try your hand at a Wanderlust writing competition! Sign up to our online travel community myWanderlust and register for our 'Friday Fun' newsletter as part of the process, and try your hand at writing an Experience. We announce each competition in the Friday email - so keep an eye on your inbox...

"Good Morning everyone," the tannoy crackled as Shane’s voice interrupted our slumber. "It’s 5.15am and we are moored just off Culverville Island. It’s a beautiful day and we thought we’d go out on a pre-breakfast landing and check out a small gentoo colony, so join us on the gangway in 20 minutes".

My cabin-mate Melanie and I didn’t need to be told twice; we were already out of our beds and halfway into our seven layers of clothing before our expedition leader had finished his announcement. We were among the first on the gangway of ex-research vessel Akademik Shokalskiy, and after a calm Zodiac crossing we were soon knee-deep in snow, laughing at the antics of the gentoo and chinstrap penguins on the shores of the Antarctica Peninsula. Our excitement kept us warm, while the gentle "krrrrooo" of the penguins and the occasional "krrraaaw" of the skuas on the look-out for unprotected eggs kept us alert to the nature all around us.

Then word came that dozing humpback whales had been spotted off-shore by our adventurous kayaking team, and a couple of Zodiacs were available to ferry anyone who wanted to check them out. We hopped aboard, very excited and somewhat nervous, and were soon approaching three very sleepy humpback whales out in the cove. Our drivers shut down the Zodiacs’ engines. We sat, quietly terrified, holding our collective breaths, cameras at the ready; three huge beasts of the Southern Ocean just a few feet away from us. 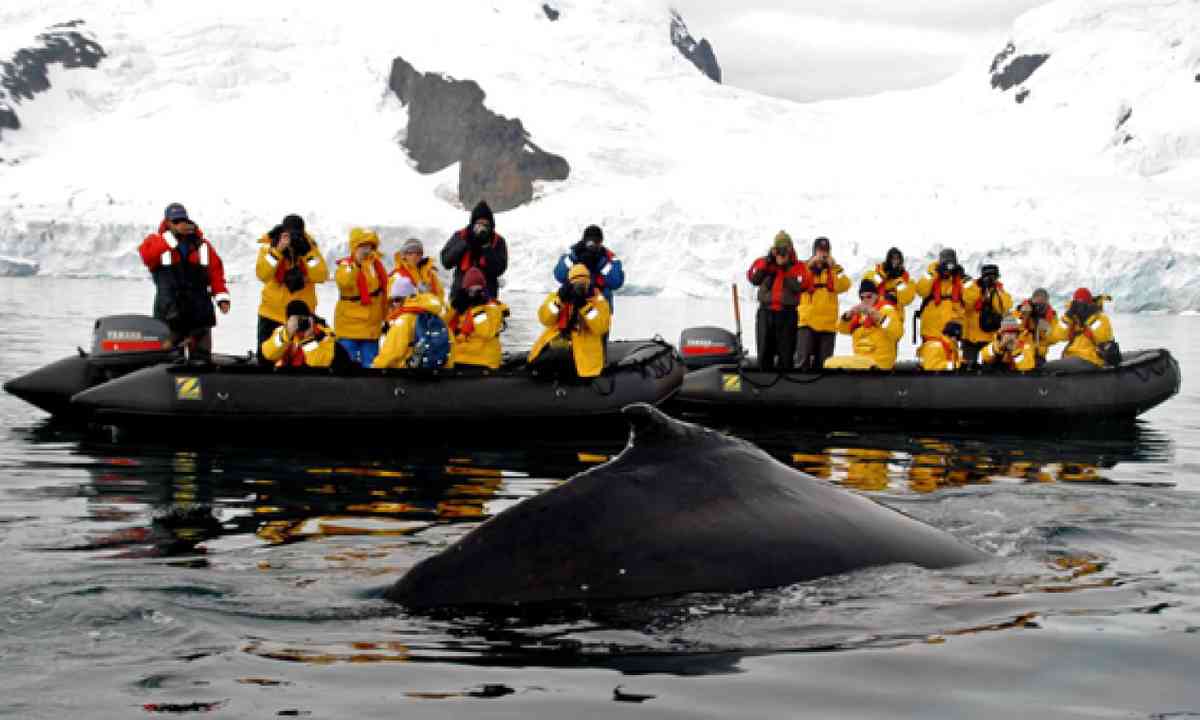 Before long, these 50-foot giants gave in to their curiosity and came alongside, blowing krilly breath out of their blowholes, and showering us with their fishy spume. Although we knew that if we stayed still and quiet we were in no danger, it was with some trepidation that we peered over the side of the dinghy, watching the whales carefully dive beneath us, circle us, then rub alongside us, sticking their heads out of the calm icy water of the cove to eyeball us at close quarters. We could practically reach out and scratch their knobbly tubercles (those warty things on their lower jaws).

They paid each dinghy a call, thrilling us with every close encounter. Memory cards were filled and rolls of film exposed (yes, this was back in 2008) capturing an amazing, never-to-be-forgotten moment. After a heart-stopping thirty minutes of investigation, all three whales moved off to deeper water, giving us an incredible show of their diving prowess as they swam away, breaching and then plunging down into the ocean, with tail flukes fanning out behind them. It was a magnificent sight.

And then they were gone.

In their wake they left 50 very happy travellers replete with beaming smiles and full memory banks (and cards), and I must confess that some of us were rather teary-eyed with the emotion of it all. Our fellow passengers who had ignored the morning call and slept in (slept in! You’re in Antarctica for God’s sake!) were kicking themselves to have missed this magical moment – but for us lucky ones, it was an encounter that lives long in the memory.

By Mark Chadwick (aka markymark983)

The boat drifted lazily in Hervey Bay, a speck of white in a wide expanse of blue sea. I was here for the whales, a family of humpbacks known to visit the bay (tucked away on Australia’s east coast) during their great migration north from Antarctica. Today, though, they seemed a little shy.

“Come on”, I bade the sea. “Come and say ‘Hi’”. With the click and clatter of people on the boat, though, I could hardly blame them for hiding away.

Minutes passed… Then an hour… The sun bounced off the flat sea. My eyelids began to droop…

“A breach!  We’ve got a breach!” The tannoy announced. “About two o’clock from the front of the ship!” I had missed it, and looked just in time to witness a magnificent splash – as if a house had suddenly dropped out of the sky and sent a small tsunami racing away from the point of impact. I hoped and prayed for more. And then…

I felt as though I was watching in slow motion. Keeping an eye on the spot where the previous splash had been, perhaps fifty yards away, the flat sea seemed to suddenly bulge, rising abruptly and giving way to a huge creature. A humpback whale, the size of a bungalow, swam upwards into the sky. 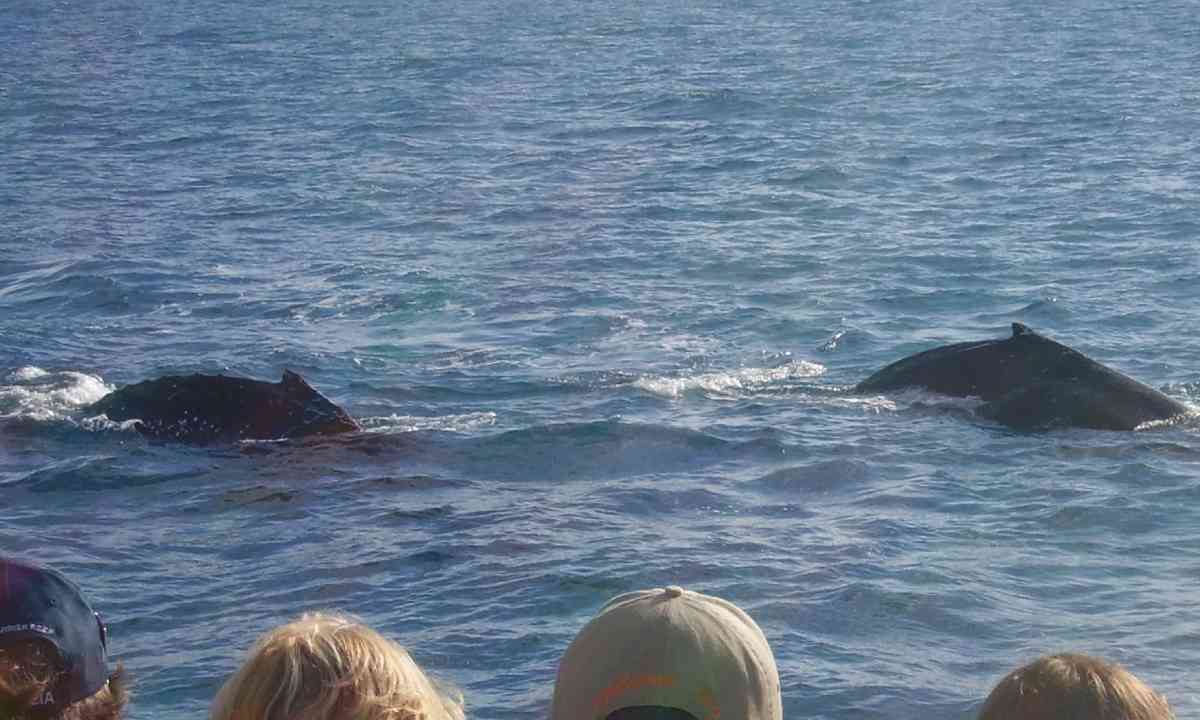 Steadily, it rose into the air, revealing itself in its entirety from rough barnacle-coated head to silky black fin. The whale flipped over onto its back, flashing its white belly at the boat as it began to fall, like a tower block in the throes of demolition, back into the water. The impact of the splash rippled around the boat, shaking the deck. And it was gone, just as suddenly as it had appeared.

My knees almost gave way at the sight of the humpback breaching. I clung to the handrail, my heart stumbling over several beats at a time. That feeling you get in your chest, that brief waterfall of emotion inside that makes you feel alive: it whispered through me, the euphoria overwhelming. The camera-clicking hordes could keep their perfect pictures – they would be no match for the experience of seeing the humpbacks in action.

The curious whales stayed with us, circling the boat. They would appear just a few yards from the deck, spouting water towards us, and then waving their tail fins as they dived down into the deep blue sea, only to breach again minutes later. They seemed to jump out of sheer joy.

As the humpbacks dived for a final time we gracelessly rumbled our way back to port. I flicked through the handful of photos I had caught on my camera – a string of unfocused snapshots. They didn’t amount to much, but I wasn't worried. It’s the experience that matters.
ALL INTERESTS