5 fantastic ways to immerse yourself in the real China

An authentic cultural experience will help you get beneath the skin of the real China, whether cycling Xi'an's city walls, taking a Tai Chi class or doing breakfast like a local... 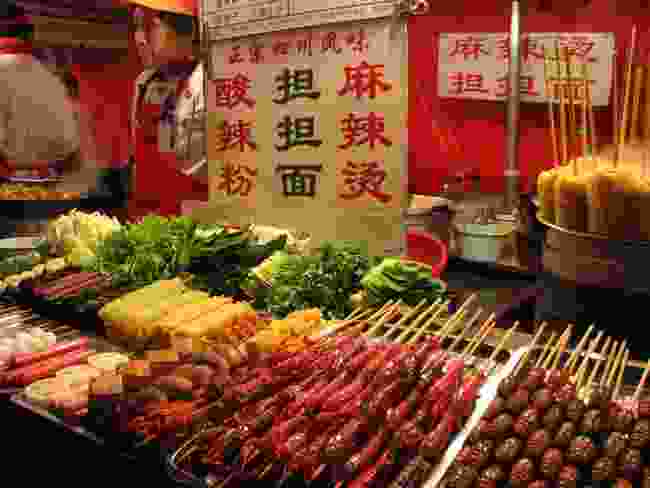 Few things unite China like breakfast. For a few kuai (RMB), you can bag a feast, particularly at Shanghai's street food mecca of Xiangyang Road. Start with a jianbing, a thin, savoury pancake slathered in egg, spring onion, hoisin and chilli (lajiao) sauce, then topped with a crispy fried wonton wafer, which later melts into a delicious mushy centre). The whole thing is folded into a spicy, salty, eggy square to be devoured greedily on the move.

Another favourite here is Shanghai's famous pork buns (shengjianbao). These crisp-bottomed baosi deliver a brothy interior that just dribbles down your chin. Dip them in vinegar or sit down at a food stall and pair with a bowl of congee, Asia's beloved but largely flavourless rice porridge, which often comes seasoned with meat or mushrooms here. This is best eaten with a youtiao, the ubiquitous churro-like doughnut that you dunk and guzzle.

Finally, if you're still hungry, grab a cong you bing, the city's famed spring onion pancakes. They're as tasty (and fattening) as they sound, and locals will line up from 6am just to get a taste of Mr Wu's pancakes at A Da Congyoubing. His famous French Concession location (formerly unlicensed and run out of an apartment) was sadly shut down in 2016 after 34 years, shortly after featuring on Rick Stein's Taste of Shanghai. Thankfully, he has recently reopened a new branch on Ruijin Er Lu and the queues are reassuringly just as long. 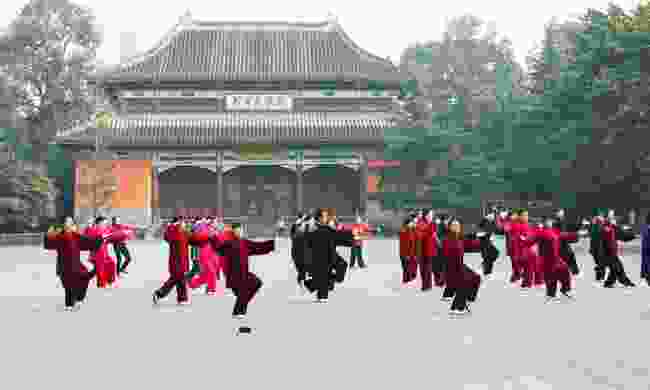 Wander the open spaces of, say, Beijing's Temple of Heaven or Guangzhou's Yuexiu Park before 8am and it's like peering into China's soul. Among the hobbyists practicing calligraphy with long, broom-like water brushes and the 'birdmen' taking their twittering songbirds for a stroll, you'll spy a more familiar sight: the elegant, controlled movements of tai chi (taijiquan) practitioners.

Tai chi is as much a part of China's early morning routine as congee or the complex team-bonding exercise drills of workers that often spill onto its city pavements. While the common sight of group exercise here may have its roots in the doctrines of Mao (since the 1950s, radio cues have orchestrated morning workouts since the 1950s and China even has an official routine), tai chi goes much deeper and has been part of life in the country for centuries.

The discipline's origins are hazy. Grouped alongside China's 300 or so martial arts, known collectively as wushu, tai chi has toes in both traditional medicine and Taoist belief. For the hardcore, Henan province's Chen village is where one of its main schools originated and students there practice up to five hours a day. But it's in the big cities, where early morning park classes make light of the urban chaos, that you see its importance. In an ever-evolving China, it remains a serene constant. Sign up for an outside class and watch the world bustle by. 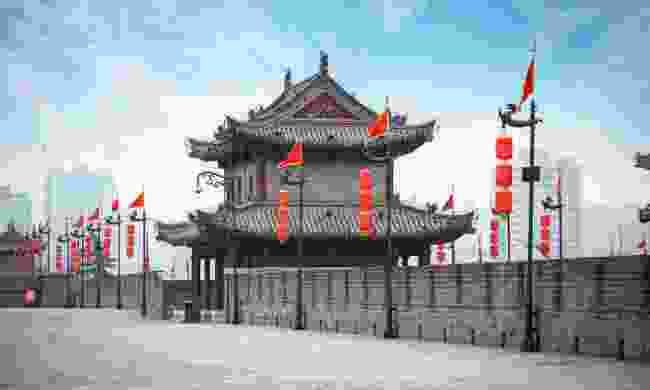 Most people know the city of Xi'an for the Terracotta Army that was discovered buried here in the tomb of Qin Shi Huang, the first emperor of China (210-220 BC). His short reign barely lasted a decade, whereupon, after surviving many assassination attempts, reports say he poisoned himself with a mercury-based elixir of life. You can see why he might need protecting, even in the afterlife.

But there is much more to Xi'an than its terracotta wonders. Most of China's major metropolises were once walled cities. Visit Beijing, for example, and you'll notice that many of its neighbourhoods still end in the suffix 'men' (meaning 'gate'), signifying the fortifications that once stood there. As with Shanghai, most of these have long since crumbled, yet Xi'an's has survived intact for nearly 650 years.

Built in 1370 AD, the city wall stands at some 12m high and 14km in length. Though heavily renovated in places, it remains the most complete in Xi'an and is easily explored atop its ramparts by bicycle, taking the best part of a couple of hours. Access ramps are located inside the major gates, and it's the best way to get an overview of a vast city that is a remarkable patchwork of old and new, just like China itself.

4: Get a spiritual high 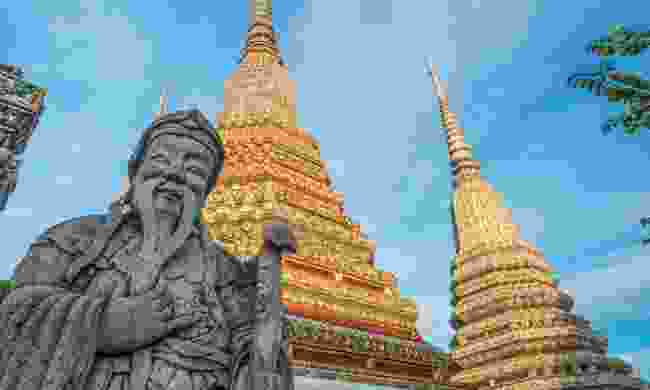 Yunnan is quite unlike any other province in China. Sandwiched between the jungles of Laos, Vietnam and Burma (Myanmar) and the high mountain passes of Tibet Autonomous Region, it was for millenia a meeting point for religions and spiritual ideas from across Asia.

It's no surprise that backpackers finally worked their way up here from the south-east in the 1960s, making their base in Dali, the pretty, old town on the banks of Lake Erhai. The counterculture was not just lured by its highland beauty and alpine waters but tales of mountaintop sanctuaries and feats of spiritual devotion. One site still dominates here, (literally) above all others.

Mount Weibo, near the old wooden houses and drum towers of Weishan, is one of China's sacred Taoist mountains. Over 20 temples trickle down its slopes, with walks through the vast forest of this sweeping park revealing one at a time. Meditation classes here allow a glimpse into a way of Taoist life that hasn't changed in centuries, as you breathe in the frigid, eucalyptus-scented air in utter peace. 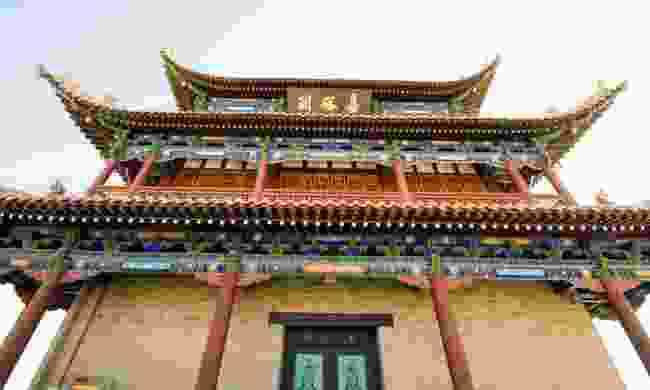 There are few sights on Earth more impressive than the Great Wall of China. Stretching from the red sands of the Gobi desert to the Yellow Sea at Qinhuangdao, it once wound some 21,000km. While a fraction of its original length survives today, there are sections of considerable length remaining that still provide some of the wildest hiking in the PRC, as well as nerve-wracking drops.

Escape Beijing's heavily reconstructed sections, such as Badaling, for the rougher areas further out. Some two hours' drive from the capital, treks around the Gubeikou and Jiankou sections see far fewer visitors and have wind rocky hills, rural villages and vast seas of oak, maple and larch to explore. The route between Gubeikou and Jinshanling is one of China's great treks, though access to the latter may be affected with renovations ongoing from June 2017.

One of the most unique sections of the Wall lies at its western tip in Jiayuguan (4.5 hours flight from Beijing). Here, the arid plains and Qilian mountains of Gansu province remind you that this was where China's control once ended. Its giant fort almost seems as much an attempt to keep civilisation in as the Mongol hordes out. It's a devastating sight that few make the effort to see.

This article was sponsored by Wendy Wu Tours, but it is impartial and independent, just like all Wanderlust content.

For more information, travel inspiration and full details of Wendy Wu's Immersive Tours, or to book your next holiday, see www.wendywutours.co.uk.