Wander Woman: Sleeping like a King in The Shining hotel – and 5 other spooky sleeps

In the run-up to Halloween, Wanderlust editor-at-large Phoebe Smith braves a stay in the hotel where master of horror Stephen King was inspired to write his bestseller…

“You are going to love the room ma’am – it’s got a view of the mountains, a king size bed, a balcony and – it’s brand new…”

It’s rare that many of us would hear the description above and demand the complete opposite. But here I was standing in The Stanley Hotel in Colorado’s Estes Park, on the edge of Rocky Mountain National Park, arguing with the concierge to be moved into an old room, with bad lighting, creaky floorboards and whatever view was available.

“Well, the only room we have in the main hotel is behind the ballroom,” he explained before quickly recommending the modern building. 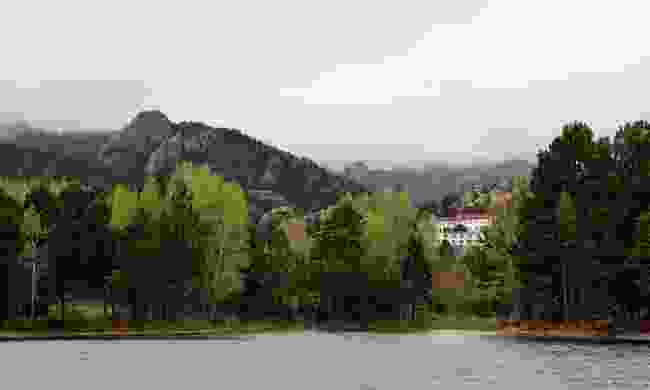 All work and no play... The Stanley Hotel peeks out between trees in Estes Park, Colorado (Phoebe Smith)

Steadfastly I refused his offer and soon found myself wandering down darkened corridors, furnished with rich red patterned carpet that seemed to make the hallways extend way beyond their actual length. The only sound I could hear was coming from my wheelie luggage, which softly trailed behind me over the floor, every now and again becoming rickety and loud on the exposed wooden boards.

As I turned a corner I felt a draught from behind me. It was the open door of the ballroom, its empty space somehow loud and foreboding in the pitch black. I hastened to my door and walked inside to the room where the wooden furniture smelt similar to the musty scent you often get in an old library. As I surveyed my surrounds the door slammed shut behind me, causing me to jump. 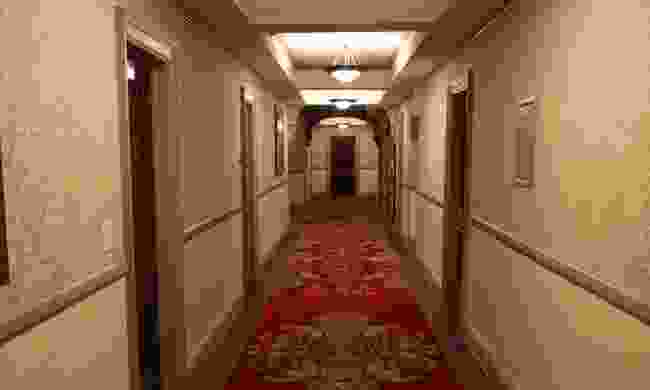 Don’t get me wrong, I didn’t refuse the luxury of a modern building to opt for this because I love old-school charm. The reason I was staying at this hotel – of all the hotels in the state – is the same reason many guests come to seek it out: it was the very same hotel where author Stephen King and his wife stayed on October 30, 1974.

When they arrived, unlike on the day I did, they found themselves to be the only guests just before it closed up for the season. After a few whiskeys in the bar (which is still there today) King headed for bed.

“He somehow got a little confused,” my guide explained an hour later as I joined one of the regular ‘Night Spirit Tours’ on offer. “He found himself on the top floor – floor 4 – where he ran into two little girls and apologised before finding the stairs and descending to his own room.” 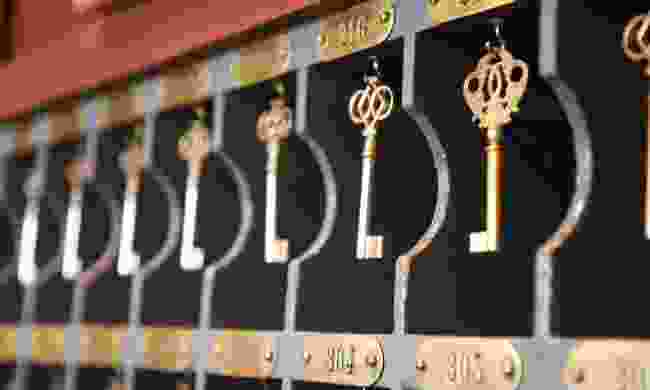 Standing on the fourth floor ourselves, we froze. I knew instinctively that everyone was, like me, picturing the two girls who appeared in front of little boy Danny in The Shining, promising that they would play with him “forever, and ever, and ever…”

She continued: “He fell asleep in his room but woke up a few hours later, having a nightmare that his son was being chased down the halls by a fire hose.”

As she finished the lift door opened and we all looked, transfixed, to see who – or what – would come out of it. It was… empty. I wondered if this was all just part of this tour and looked around to see how my fellow spirit hunters were fairing. Some were chuckling to themselves, but mainly everyone was straight faced, almost unsure of whether they should be scared or not. We started walking again. 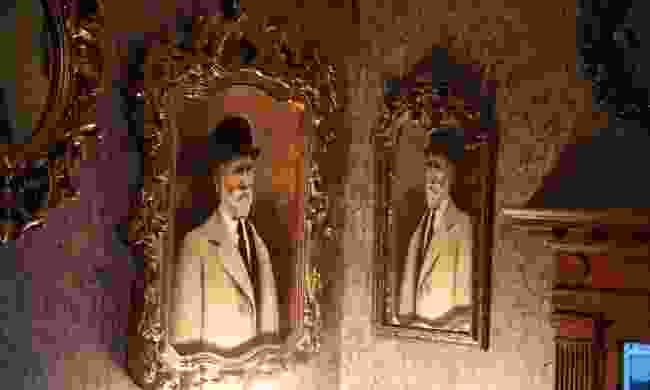 Reflections on the past (Phoebe Smith)

The fourth floor is itself famous. Having been featured on a number of ghost-hunting TV shows, in the USA and beyond, three particular rooms – 401, 407 and 428 are said to be ‘spirited’ and tend to book up quickly. Reports of ghosts sighted vary from children laughing (this floor would have once been the nursery following its construction in 1909) to wardrobe doors slamming, figures stood at the end of beds and even, rather bizarrely, luggage being unpacked.

Wishing I had a friendly ghost to follow me around and do all my packing and unpacking, I walked on to where a ladder leads up to the attic.

“Is there something written there?” someone asked. So I shined the light from my phone to see. The word ‘Redrum’ was clearly etched into the flaking white paint. I laughed – this was a definite set-up.

We wandered downstairs once more to stand outside the most famous room in the hotel – Suite 217. It was here where King stayed and, once awake, sat smoking on the balcony writing up his idea for the now legendary horror book.

“In the morning King spoke to the owner and mentioned how he’d run into his two daughters,” explained the guide. “’Daughters?’ said the owner. ‘I don’t have any daughters…” 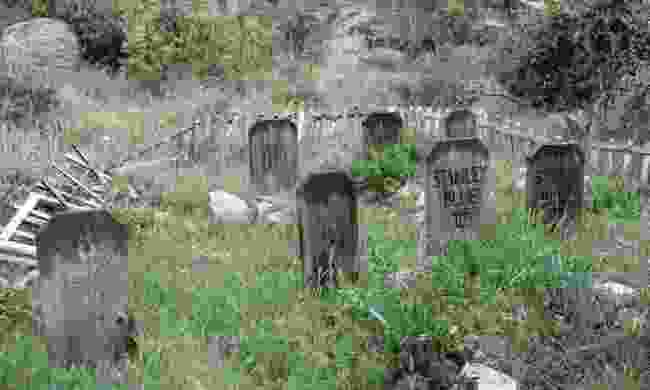 The Stanley Hotel has its own pet cemetery (Phoebe Smith)

A wide smile cracked across her face as we laughed, nervously. Due to guests being in the room now (as they usually are – it’s the most requested room – recognised by the fact there is no number on it as every time they put one on a souvenir hunter takes it), we were unable to go inside. But there were a few more points of ghoulish interest still to come.

There was the pet cemetery just to the side of the main building, the concert hall (said to be the most haunted room of all), and the strange underground limestone caves underneath the main hotel, which the staff once used to get around. They have since been blocked up but we, the privileged few, got to look inside. 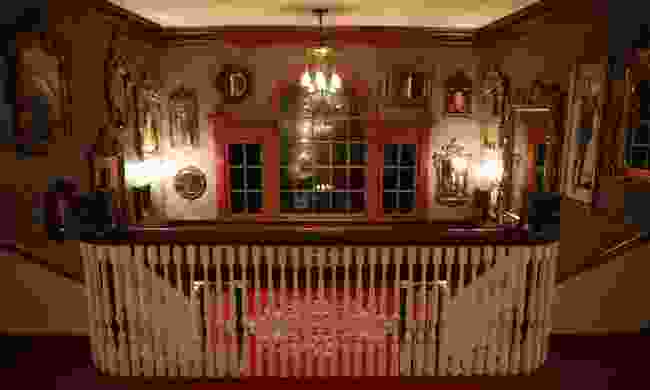 The old-world charm and spookiness of The Stanley (Phoebe Smith)

First in, I immediately snapped a shot of the empty space and swear there was an orb on my photo – a circular shape said to indicate paranormal presence – though it does perhaps resemble a few specs of dust. The guide was delighted with my capture – though I was not wholly convinced.

But as I made my way back to my room I decided to take a detour back upstairs. Standing in those long empty corridors on the second floor that seem to echo with silence, I waited for a few minutes. Other than the occasional creak or sound from the air conditioning, nothing happened.

Tired from my journey (I drove straight from the airport in Denver) I headed to my own room, and as I walked through the darkened corridors I couldn’t shake the feeling I was being watched. As I entered my room the bathroom door slammed shut, a light flickered and, when I finally switched it off and rested my head on the pillow, I felt the bed move as though someone was lying right beside me. I couldn’t move and refused to open my eyes in case I came face-to-face with a ghoul.

I willed myself to fall asleep that night, refusing to acknowledge the strange sounds around me, determined to let jetlag do its thing. The last thing I remember before waking up the next morning is thinking one thing and one thing only: What on earth is wrong with a modern room anyway? 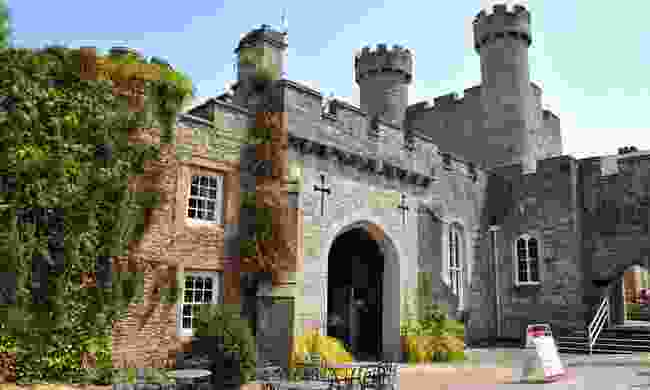 Fancy a stay where things (may) go bump in the night? Check into one of these notorious ghostly hangouts...

Perched atop the Welsh town of the same name, this medieval fortification built during the 13th century is now a plush hotel. But it wasn’t always a hostelry. In the 1920s it was, for a time, a hospital for rare internal diseases, which may explain a few ghostly goings on amid the hallways. From strange sounds, to the appearance of the ‘Grey Lady’ – said to be the spurned wife of one of the commanders who was stationed here and had an affair with a local woman (who she murdered with an axe) – guests frequently report a ghostly apparition photo-bombing their pictures, so keep your camera ready.

Often topping the list of most haunted hotels in the world, this grand hotel was once the largest in the city, attracting clientele that ranged from Oscar Wilde to Mark Twain, Princess Diana and Winston Churchill. But there’s another frequent visitor nowadays, which guests who stay in room 333 may meet. He’s a Victorian doctor, who decided to murder his wife then kill himself on their honeymoon in that very spot. Other than the unstable GP, there are also reports of a German prince who leapt to his death off one of the balconies and now moves between the walls causing every room he passes through to drop in temperature. Best take the thermal pyjamas… 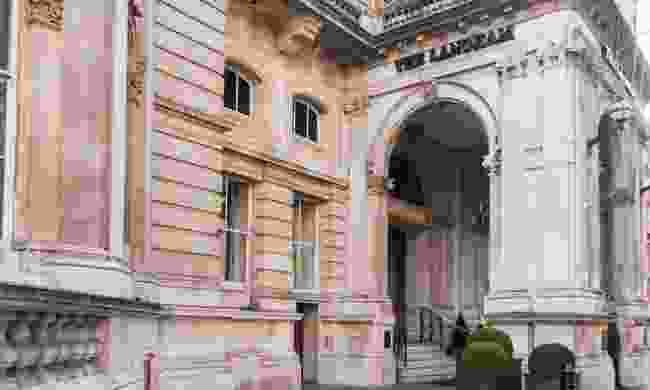 Not a mistype and not ‘The Stanley Hotel’, but rather the now-called ‘Haunted Shanley Hotel’ on the other side of the continent. Situated in New York State, it’s reputed to be a hotbed of paranormal activity. Having been the backdrop to many a tragedy – including the death of several young children – sleep is by no means guaranteed. In fact previous guests have been made to sign a waiver and must be over 16. Reports of ghostly goings-on range from chairs rocking by themselves to giggling children, unexplained clock chimes, footsteps and mysterious piano playing. Adding another ominous element is the correctional facility nearby. Sleep well.

Part of the famous Fairmont group – who have their fair share of luxurious if not eerie properties across the country – this castle-like structure is situated in a dreamy forest surrounded by mountains. But inside there is a more secret, but spine-chilling sight. That is the bricked up room of 873, which was where a murder took place many years ago. Both staff and visitors have seen spectres of the family who died wandering in and out the disguised brickwork. Then there’s the tragic case of the ‘burning bride’ whose dress caught fire on candles as she emerged from her room, causing her to panic and fall down the stairs and break her neck. Reports have her still dancing endlessly in the ballroom, unaware that the party’s over. 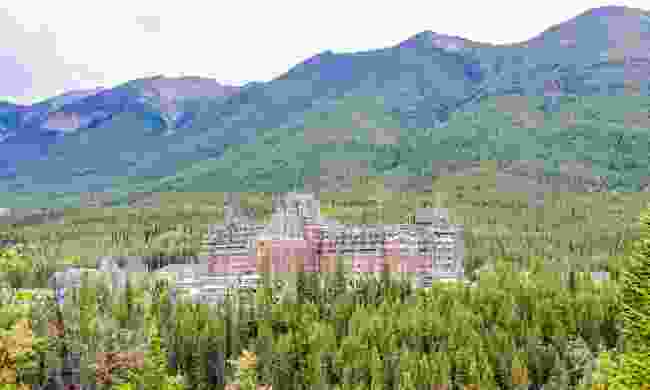 From a, ahem, ‘resting’ place for rowdy seamen fresh off the boats, to a hospital to those suffering from the bubonic plague in the early 1900s, the Russell Hotel has seen (and been) it all. Nowadays it’s a very quaint boutique hotel in the charming area of The Rocks, but many guests and even staff have decided to leave without staying the whole night due to ghostly activity. Most of it seems to happen in Room 8, where one of the aforementioned sailors likes to linger, watching over lone female guests while they sleep. Also heard are creaky floorboards, footsteps and a feeling of panic in residents who wake up in the early hours struggling to breathe. Luckily there’s a pub downstairs, so perhaps a stiff drink before bed is required – purely for medicinal purposes, of course.