From smooching with a cod to drinking copious amounts of rum, Wanderlust’s editor-at-large Phoebe Smith checks out some of Canada’s strangest drinking rituals…

Kissing a cod was never an encounter that topped (or even featured on) my bucketlist. To be brutally honest, visiting the Canadian province of Newfoundland didn’t quite chart either. But on a bitterly cold autumnal day I found myself in latter, about to do the former – and couldn’t help but wonder just how on earth I got myself into such a predicament.

It started with an invitation to explore a little known National Park called Gros Morne. Situated on the western side of the island province (which is coupled with the more northerly region of Labrador) I was shown photo after photo of hikers stood on mountaintops gazing down into an inland fjord. Being a wilderness lover I was suitably intrigued. 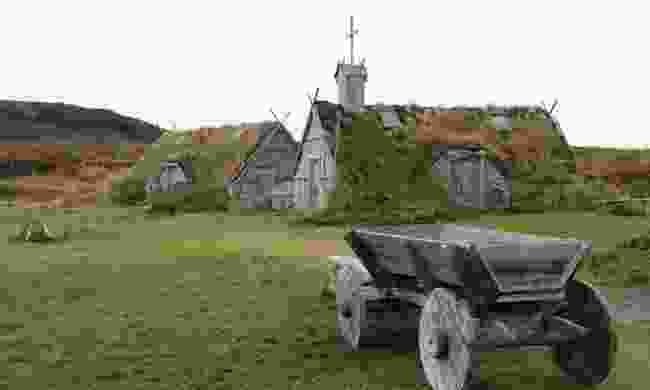 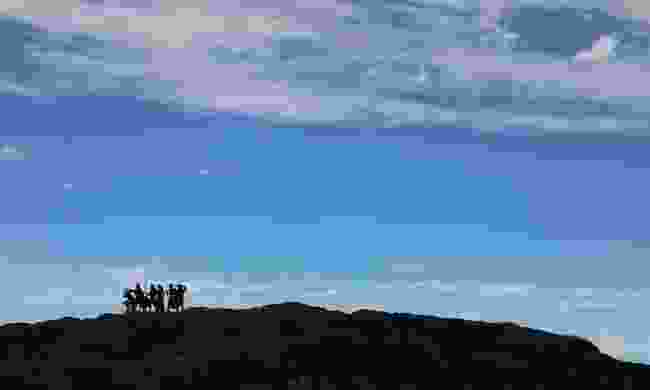 Then I was told about an archaeological site where Vikings are confirmed to have landed over 1,000 years ago and where the first European baby was born into the New World – and my interest piqued. Finally, I heard someone say that there may still be a chance to spy whales from the land and curiosity got the better of me. Before you could say ‘humpback’ I was on the 5.5hour flight to St John’s, then on a puddle jumper 14-seater aircraft for 25 minutes, bound for a place called Deer Lake. 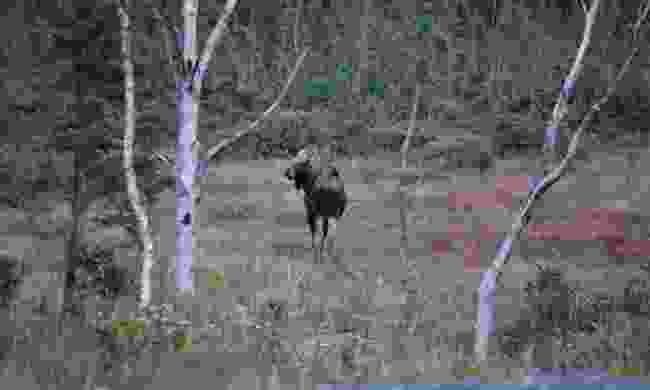 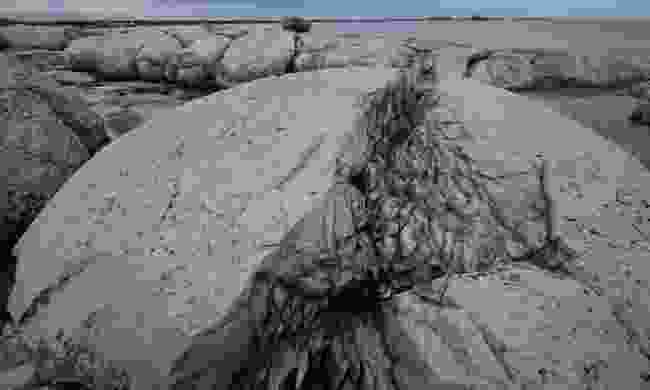 The town may have been little more than a collection of small houses and handful of hotels, but the following morning driving north, the coast began to present itself in rugged, windswept glory. Coves were labelled with captivating names from ‘Deadmans’ to ‘Savage’ while colourfully painted wooden houses dotted the water’s edge and signs casually promised an array of hidden treasures to discover – from shipwrecks (visible from the beachside car park), to geological wonders – think thrombolites (large round disc-shaped Cambrian-mounds bound by algae and bacteria over millions of years ago) and wildlife – in the form of moose nonchalantly wandering across the road. 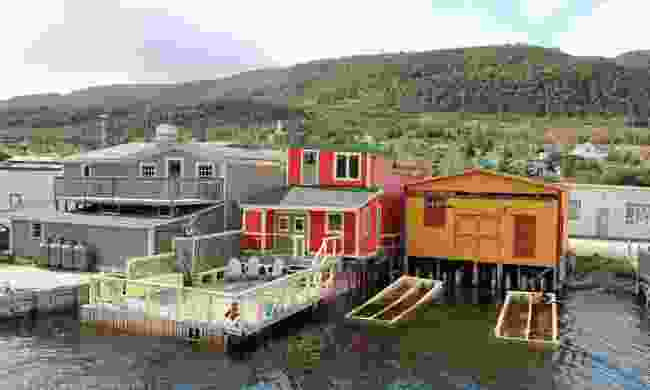 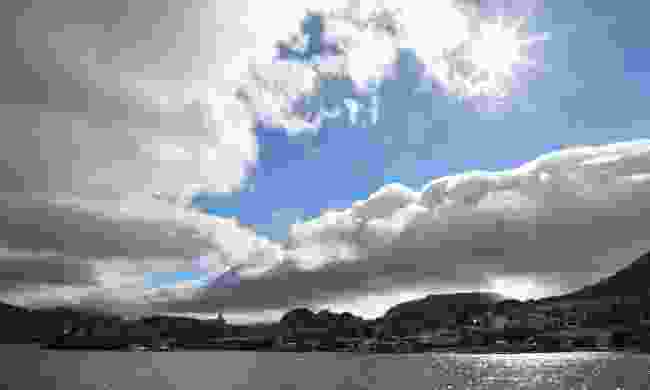 “You never told me about all this,” I said to guide Karen as we neared another little inlet, where the fishing boats reflected in the water looked like a scene from the Norwegian coast. She just smiled.

This, I soon realised, was very typical of Newfoundland. Settled by fishermen and farmers mainly from Ireland and England in the late 17th century, the self-depreciating humour, modesty and unabashed warmth and friendliness, hits you harder than the incoming westerlies that whip off the ocean.

The more I explored the more the island intrigued me. But not in the way I thought it would. With heavy rain setting in, it wasn’t the landscapes I could get to know but rather the places the locals went to – from cafes-cum-galleries to tiny pubs ­- and the locals themselves. 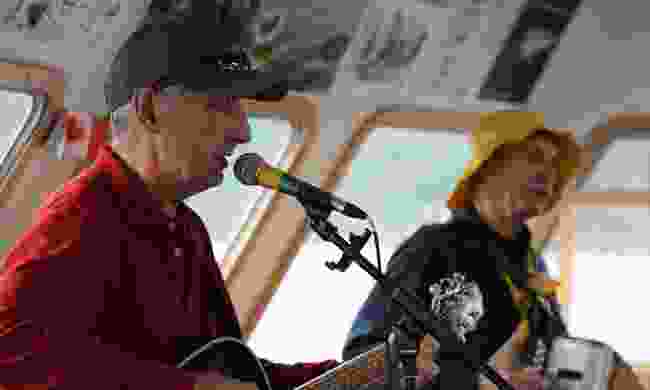 I found myself in a tiny town called Rocky Harbour watching an island-famous band, called Anchor’s Aweigh, perform seafaring ditties on banjos and accordions. In between the songs they told jokes about the realities of living in a place where the primary industry of cod fishing collapsed in 1992 and those left there had to work hard to find a new way to make a living to stay in the place they called home. The answer, it seemed, was tourism and a very clever bit or marketing by a savvy bar-keeper – goading visitors to get ‘Screeched in’, which I was destined to find out more about the following morning. 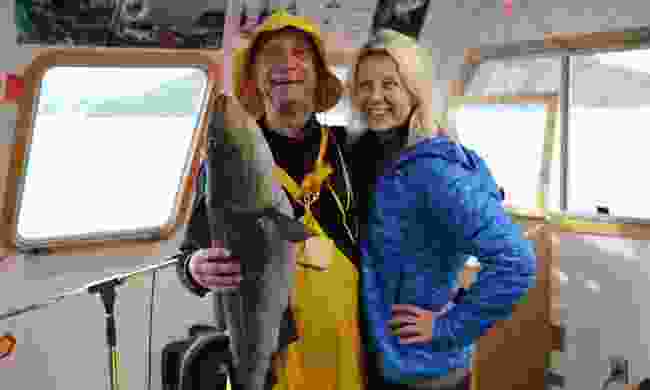 Getting screeched in (Phoebe Smith)

And so it was that I found myself on a small ship in the entry to the Gulf of St Lawrence, a few miles out from the town, readying to kiss a fish. As I eyed the bag in his hand nervously, the captain (aka accordion player) – known as Reg – dressed in a yellow waterproof sou’wester handed me a shot glass filled with dark-coloured rum.

The Demerara sugar distilled Jamaican drink has a long history on the island. Back in the early 1800s cod would be traded with the West Indies for rum, and sailors are said to have drunk a particularly high strength blend that resembled a kind of moonshine. During WWII when some American soldiers were based there one is said to have taken a shot of the brew and cry out in pain as it burned his throat. From then on it became known as Screech. And, since the 1970s to become an honorary Newfoundlander, you have to do what that solider did and sup the spirit in one go, swear allegiance to the island and… kiss a cod.

“We’ve heard rumours that there have been some Come From Aways [the Newfoundland term for non-island born people] wandering around the province,” Reg cried out in his distinct Newfie dialect that sounds like an often-indecipherable combination of Irish and Jamaican.

“Why do we need to kiss a cod?” I asked singer (and crewmate) Wayne. “It’s a traditional symbol of the island,” he said, “you’re showing your allegiance.”

And so after repeating a string of sentences after Reg – not really knowing all the time what I was actually saying – downing some Screech (and yes, it burned), I readied to kiss the cod. 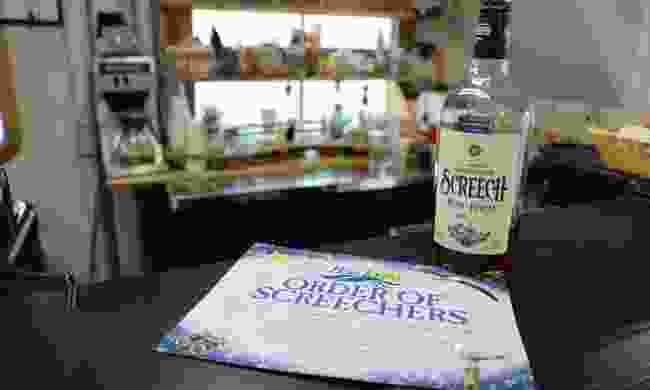 Reg reached into the bag and pulled out a cod. It was large, it was ugly, it was grey, it was… made of plastic.

“We can’t bring a frigging cod onto the boat!” he declared, and proceeded to ‘baptise’ me with this symbolic fish.

It was the most fitting way to celebrate the uniqueness and character of the island. And as I stood up to perform a jig with him, to the applauding crowd, cementing my entry into the official ‘Order of the Screechers’ while being presented with my certificate, I mentally tore up my imaginary bucketlist and resolutely promised myself to stop being closed minded about destinations that didn't quite make it. For they, like Newfoundland, can hide some of the most unexpected travel experiences. And I’m sure it wasn’t just the Screech talking… 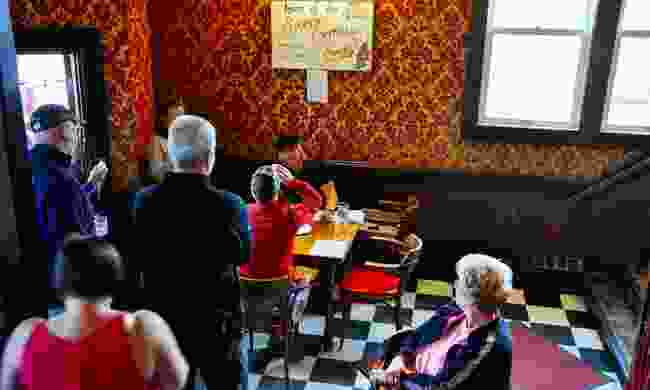 Head to the far reaches of this northern territory – in particularly the town of Dawson’s City – and you can’t quite escape this rite of passage. The idea is to drink a shot of Yukon Jack whiskey, which contains, floating in it – a severed (and mummified) human toe. Invented in 1973 by a man called Captain Dick Stevenson who found the toe of a man called Louie Linken (a rum runner back in the 1920s whose brother had chopped it off for him to prevent gangrene when frostbite set in) he came up with the legendary procedure to join this very exclusive club. The rule is you lips must touch the toe. – only mind you don’t take too thirsty a gulp and swallow it…

2: Have a ball in the Testical Festival, Calgary

There’s a little known delicacy in the Rocky Mountains area, often found on menus, known as the Prairie Oyster. The astute may note that there is, of course, no sea in these landlocked states and provinces. Though what there is, every year, is an event that does indeed start with a C, as in mass Castration. First eaten by the cowboys who roamed the flatlands with their cattle, they wouldn’t want to waste potential profit by eating one of their herd. So, instead, they would, after castrating all the bullocks, feast on these off-cuts. Bull testicles were the order of the day and are now ubiquitous in many a downtown Albertan brewery in early July (harvesting season) during the annual festival, where visitors are goaded to see if they have the balls to try one – washed down with a local ale. For the super brave, you can opt for a special beer derived from the ‘oysters’ themselves. Sounds nuts to us…

Inspired by the Newfoundlander’s tradition, a few years ago a brewery and a distillery decided to team up to offer out-of-towners the chance to become an honorary local. The process involves pounding your chest three times, mixing a shot of Saskatoon Liqueur (made from the province’s native berries) with the local 16 Beer (that’s a type of beer not 16 pints!), downing it, clinking glasses with a local and yelling the town’s name. Those who partake get a card proving your status as a native – now there’s something to yell SASKTOON about.

Taking the lead from their fellow ski-enthusiast Austrian friends (though there are fiercely debated reports of the traditions’ origin, with many claiming this province started it first), the Shot Ski is definitely focused on pals rather than rivals. Well, if you’re not close before you proceed to do this, you soon will be. It basically involved placing multiple shot glasses on a ski and then all lifting and drinking at the same time. Usually done in groups of five, the world record stands at 522 people (done in this fair province by fixing together over 700 skis). The perfect way to find your ski legs.

5: Cuddle up with a Caribou, Quebec

It’s winter, it’s cold, there are tonnes of deer roaming around – so what else are you going to do to keep warm, right? Well, not exactly. This kind of caribou does not involve hugging a furry quadruped, rather, supping a special warm drink that contains a rather macabre part of one – blood – or so legend has it (another story says it was simply that First Nations people mistook the dark wine the French trappers drank for this). Either way, the recipe doesn’t actually contain any now, rather wine, mysteriously unspecific ‘alcohol and flavours’. Some say it’s vodka and cinnamon, others claim it’s maple syrup – go to the winter Carnaval de Quebec and you can try and hunt the recipe yourself, though after a few – to quote a bad cracker joke punchline – you’ll still likely have no-eye-deer what’s in it…