Wander Woman: 7 deadly sins of travel – How many have you committed?

Sick of being at the receiving end of bad travel manners, Wanderlust’s editor-at-large Phoebe Smith draws up a charter to make travellers behave a bit nicer to each other in 2019…

It was somewhere over the South Atlantic when it hit me. Not a thought or a notion, you understand, nor a feeling of awe as I gazed down at the mighty ocean whizzing past me at several hundred miles per hour. No, what hit me – quite literally – was a rogue rucksack strap, square in the face.

There I was, sat comfortably in my aisle seat minding my own business, when the woman from across the way decided she needed something from her hand luggage, urgently. After getting said item, without a single thought for her fellow passenger (a.k.a. me) she swung it around readying to put it back and, as she did, its strap slapped me right on the cheek.

I yelled out in pain and she looked down at me. “You hit me with your bag strap,” I stated, rubbing my injured face.

Without even a ‘sorry’ or a nod, she pushed the overhead bin shut and went back to her seat. I was livid.

This year has been undeniably wonderful. I have travelled the globe in search of rarely sighted wildlife, learned how to dive – opening up more places to explore under the waves as well as on land, and spent time in some of the wildest and far-flung destinations – always on the hunt for stories. But travelling this much has also brought into sharp focus just how rude we can be to our fellow passengers when we travel. Gone are the usual social norms of good behaviour and etiquette – it’s every (wo)man for themselves and anyone who gets in our way be damned.

With the stress of passing through security factoring in their ever tighter restrictions on just what we can and can’t take with us – not to mention longer than ever lines to actually make it through meaning we might not even make the flight at all, not to mention restricted space on airplanes themselves – both for us and our precious hand luggage, and in many cases now not even a free meal or drink to keep us sane – it’s perhaps no wonder that good manners left the aircraft. My theory is that they departed at the same time a complimentary cup of tea was taken away.​ 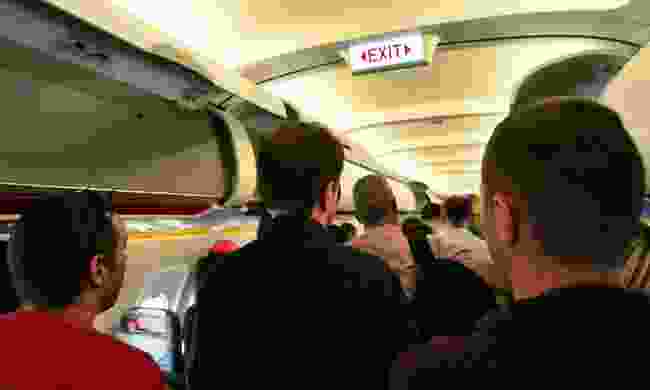 Everyone gets off the plane eventually. Simply be patient and wait your turn (Shutterstock)

On that same journey where I got a face slap by a rucksack strap (headed for Chilean Patagonia, for anyone wondering) I also had to endure someone trying to persistently force their way into the bathroom while I was in there – despite the door being clearly locked and the engaged light on; walking in on someone on the toilet who didn’t bother to lock the door themselves; getting soaking wet flight socks from someone (or perhaps several people) who didn’t appear able to go to the toilet on a plane without peeing on the floor and, when I finally reached Santiago with a very tight turnaround to a connecting flight to Punta Arenas looming, getting stuck behind people who clearly weren’t in transit and so thought that no one else should be in any rush either and proceeded to block me from passing them.

And so, with a new year looming, I thought it time that someone (again, me) could help us all have a more pleasant experience if we avoided committing these particularly annoying travel sins…

1: Not walking on travelators

They are there in the airport for a reason – to get passengers from A-to-B smoothly and efficiently. And they are especially useful at enabling those of us with connecting flights to move between terminals and gates quickly. So why, oh why, do you insist on standing two-abreast, chatting about all manner of irrelevant things, when there is clearly a growing crowd behind you who are desperately trying to get past. Yes, we get it, you are not in a rush, but we are. It’s wonderful you have time to stand still and watch the airport madness go by, but please – we’re begging you - stand single file well over to one side and let those in a rush get past you.

2: Putting your hand luggage in a totally different overhead bin from where you’re sitting

Sounds like a good idea doesn’t it? You’re at seat number 48A (likely one of the last off the plane) so to save carrying it all the way down, you may as well stow it above seat 12 and simply pick it up on your way back – clever, right? Wrong. Because you have now taken up a whole wedge of space intended for that row and, effectively began a vicious game whereby row 12 steals row 13’s space, they steal 14’s and so on – until either tempers fray or some poor soul in row 15 can only find space for their bag near the back of the plane meaning on exit they have to battle the wrong way down the aisle filled with angry passengers. You’re messing with the system – don’t do it.

It’s been over 12 years since the rules changed (2006 to be exact), restricting passengers from taking any liquid through security that is over 100ml. At the same time everything tightened up security-wise, with laptops being needed to be placed in their own tray (out of any case), jackets needing to be removed and water bottles emptied. A fact you’re reminded on your way through security on several occasions. Yet how come every time you reach the security gate you seem to act as though these rules are completely new? You look surprised when you are asked about liquid. Incredulous about the need to remove a laptop or tablet and proceed to take 20 minutes getting yourself ready. Meanwhile we’re all stood behind you (rushing, naturally) to our gate. Prepare yourself for security while you’re queuing – everyone will thank you for it. 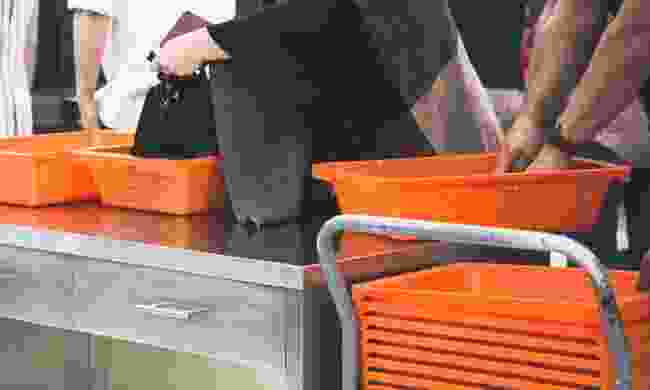 Have your laptop and liquids ready at security (Shutterstock)

4: Failing to give way to someone exiting the toilet on the plane

We understand – you are desperate for the loo and have been holding it in ever since you neglected your common sense and settled in for a movie and meal before relieving yourself. But it’s not our fault. And you’re damn well not going to get into the tiny cupboard-like cubicle any quicker by steamrollering us as we exit. The rules are simple – like in the London Underground – let exiting passengers out before you step in. It’s simple. It works – so do it.

No one likes the middle seat – no one. And why would you? You don’t get to sleep resting against the side of the plane or escape the drudgery of airplane travel by admiring the view like the window seat taker. And you don’t get the luxury of getting up and stretching your legs, taking something out of your hand luggage or nipping to the loo when you need to unlike your aisle dwelling counterpart. So there has to be some concessions. The unwritten law is that the one suffering in the middle gets both armrests – it’s only fair. So don’t be greedy and steal it from them – offer it up like the hero we both know you are. Well done.

6: Being hit with a bout of temporary numerical amnesia

Second to the nightmare that is going through security, is perhaps the actual act of getting on a plane. With narrow aisles and an obligatory scrum over space in the overhead bins, everyone is in a mild sense of panic. But why is it that even though you knew your seat number when you strategically picked it out during online check-in, knew it when you organised yourself by group number at the gate, and were reminded it again when stepping onto the aircraft, you suddenly stop in the middle of the aisle confused to find that seat 57 is no where near row 21 where you’re currently stood. Yes, we all look wistfully at the lie-flat beds in business class. And true, we wish we’d forked out the extra for the bulkhead seat, but deal with it; you have the ensuite (aka toilet adjacent) at the back. Deal with it and move on – so we all can too…

7: Driving wheelie luggage without a licence

Those 4-wheelers steer like an absolute dream – but hang on – you’re steering it this waaaay… ouch! There’s no doubt that pulling your bag behind you is way easier than having to carry it, but do remember, while it’s so easy you can simply tug the handle and forget about it – you really shouldn’t. Because you are surrounded by people, tired people, stressed people, people running for a flight that has changed gates last minute. Your wheelie luggage is not part of you; if you make a quick change in direction it will not always follow you. It’s also not a cattle prod – if you roll it towards someone they will not automatically get out of your way. Be kind with your luggage and with your fellow travellers, because luggage trends may come and go, but passengers – we’re in it for the long haul and you never know who you may end up sitting next to for that 12 hour flight…