Want to break away from the crowds and visit rural Andean communities on your journey to Machu Picchu? Try a 'community trek' from the village of Lares

5 mins
“We're making good progress!” Herbert, our guide, told me as we settled down for lunch. Sitting near the top of the Pachacutec Pass at almost 4,450m, we had been climbing all day and we could see the Lares valley stretching out in front of us. The lakes below were with the clearest I'd ever seen, and yet I was so tired I was more interested in the content of my lunch pack – at least for now. I turned towards my friend, but she was already halfway through her sandwich. It was our second day hiking the Lares trail on our way to Machu Picchu – we'd been geared up for a tough day, and it hadn't disappointed.

As I gulped down some more water, I saw a movement at the bottom of the hill. It was the porters with the donkeys. “Didn't they leave two hours after us?” I asked Herbert, hoping he'd correct me and make me feel at least slightly more adequate. “They grew up on this terrain,” he answered, “they make this journey almost every other week.” When I next turned my head they had already passed. The three donkeys – weighed down with our luggage and cooking utensils – and the elderly couple who led them, all trotted by as I wheezed into the thinning air. 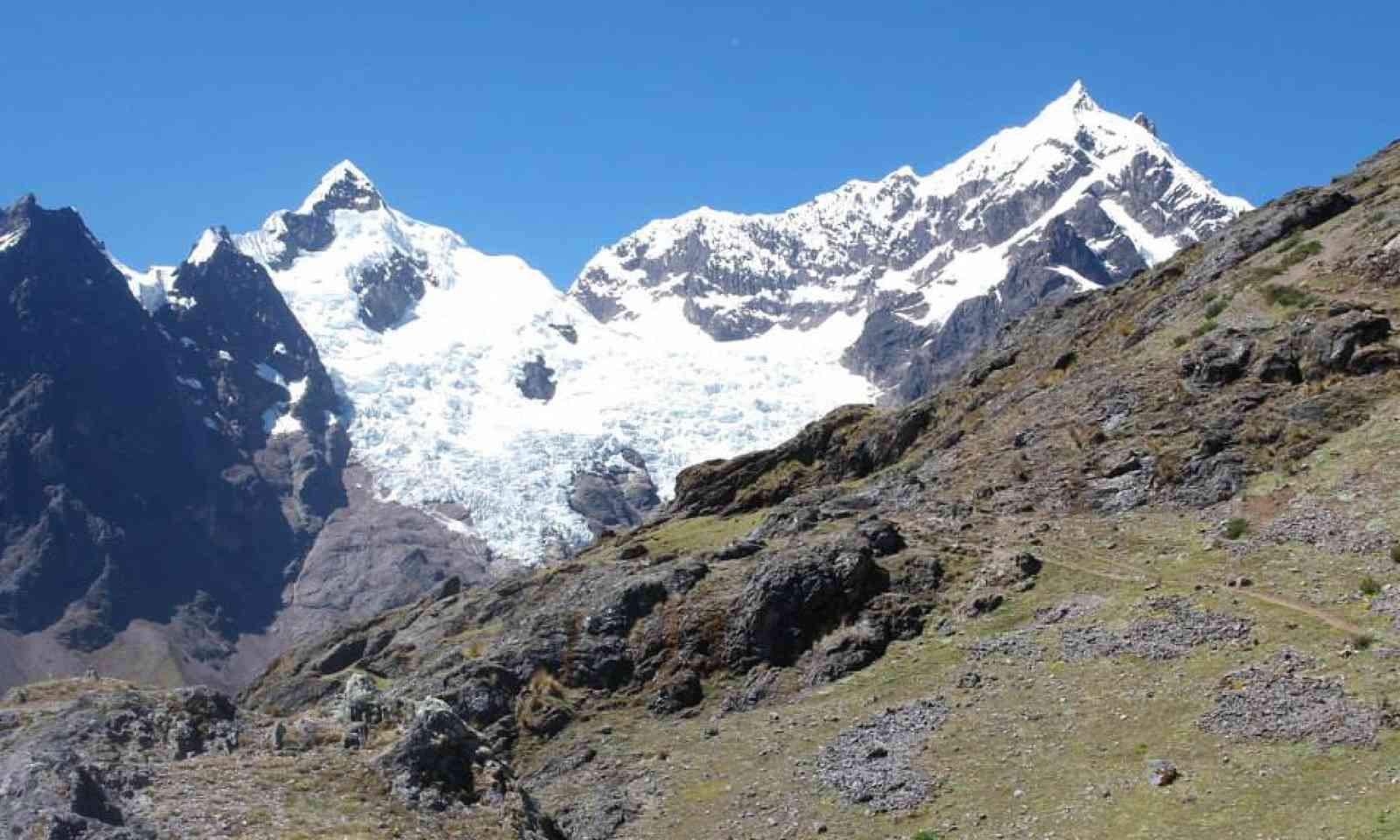 The Lares trail doesn't follow the popular path of the Incas. Though there are scant traces of their civilisation along the way, without guidance you probably wouldn't notice them. The main attraction of this route – along with the scenery – is the people you encounter on the way.

Dubbed the 'community trek,' it leads you through some of the remote native Andean villages folded into the mountains, and to the homes of the residents whose lives remain practically untouched by the commercialisation of the western world – or any other world for that matter.

Our first stop on the way to our starting point at Lares was the town of Calca. As we climbed out of the car, Herbert told us that we were going to buy bread rolls for the journey. “They are not for you,” he said. “These are for the people we meet along the way.”

At the stand, we settled on eight rolls each, tied the plastic bags to the outside of our day packs and made our way back to the car, the bread bouncing off the back of our thighs. A few hours later, we  had arrived at the village of Lares and were standing at the start of Pascana – the path chosen for our three-day hike.

The first stage would take us to the village of Quishuarani, about two hours away. Our luggage and the chef went on ahead of us to set up camp, and we started on what was to be a fairly easy climb. “It will prepare your legs a little for tomorrow!” Herbert said, smirking slightly. 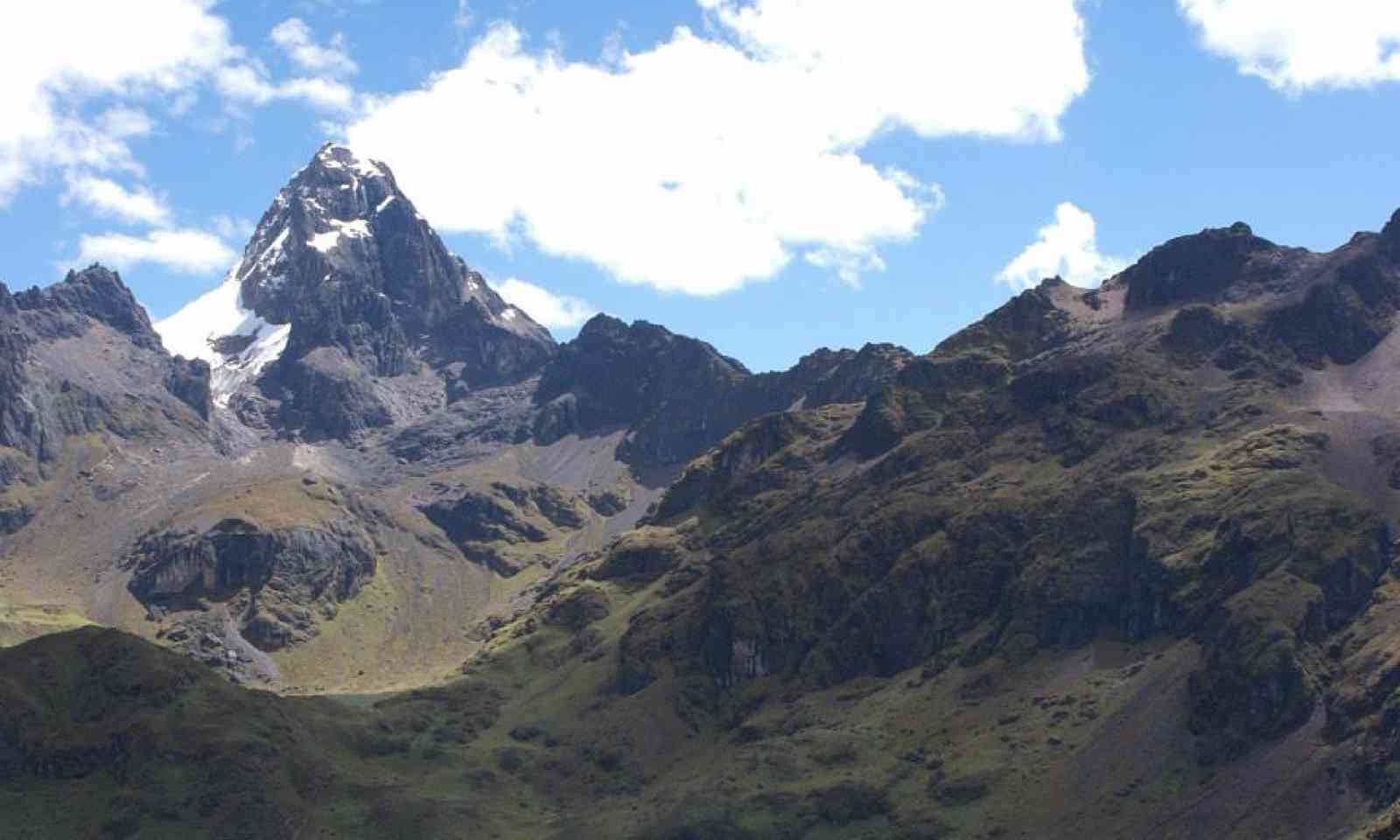 The dirt track had a very gradual incline, but we were already nearing an altitude of 3,850m, so progress was slow. The hills around were freckled with the odd wandering llama, and trees stood bare and frail. After an hour of walking, I spotted a woman in a field below, her bright red cardigan set starkly against the relentless green. She was weaving. “Go offer her some bread,” Herbert said from behind me.

I made my way down the hill, and he followed to offer some opportunity at conversation. “The village is a long way away, and so they often go without it,” he explained as her two dogs bounced towards us. We had a brief exchange, and she showed me what she was working on. She was watching over the village flock, she said in Quechua, and weaved blankets to sell in the market as she did so. As Herbert relayed her response to me in English, her fingers worked like mechanical pins on a machine. All I could offer was a smile, and a couple of bread rolls.

As we went to cross the log bridge into Quishuarani, I felt a dull thud on my walking boot. I bent down and picked up a marble. Turning around, I saw three young boys rushing up the hill towards me. One apologised as I handed it back to him, and the others descended on Herbert a mass of enthusiasm and questions. “They're just on their way back from school,” he told us as they paced around, throwing their marbles across the ground. “Where are you from?” one asked me. Herbert nudged a glance towards my bag, and I reached for another roll. “Gales,” I replied, to some confusion. “Inglaterra,” Herbert offered. “My sister makes beautiful hats, would you like to see?”

They accompanied us to the village, calling their friends over along the way. By the time we reached our camp, a crowd had formed to welcome us. But the sun was setting quickly over the ragged peaks behind us, and as we made our way through the gate to our host family's house the group dispersed.

Our tents were already set up under a shelter in the garden, and the three-course dinner was almost ready. The eldest of the family's four children sat on a mat on the ground outside, weaving intricate bracelets with her fingers. She had set out a couple in front of her, along with some traditional scarves. I sat with her, and she smiled as I tried to get mine started – only managing a couple of anaemic braids. She took the threads in her hands and showed me a simple pattern to follow. It soon became obvious that, tonight, I was a lost cause. 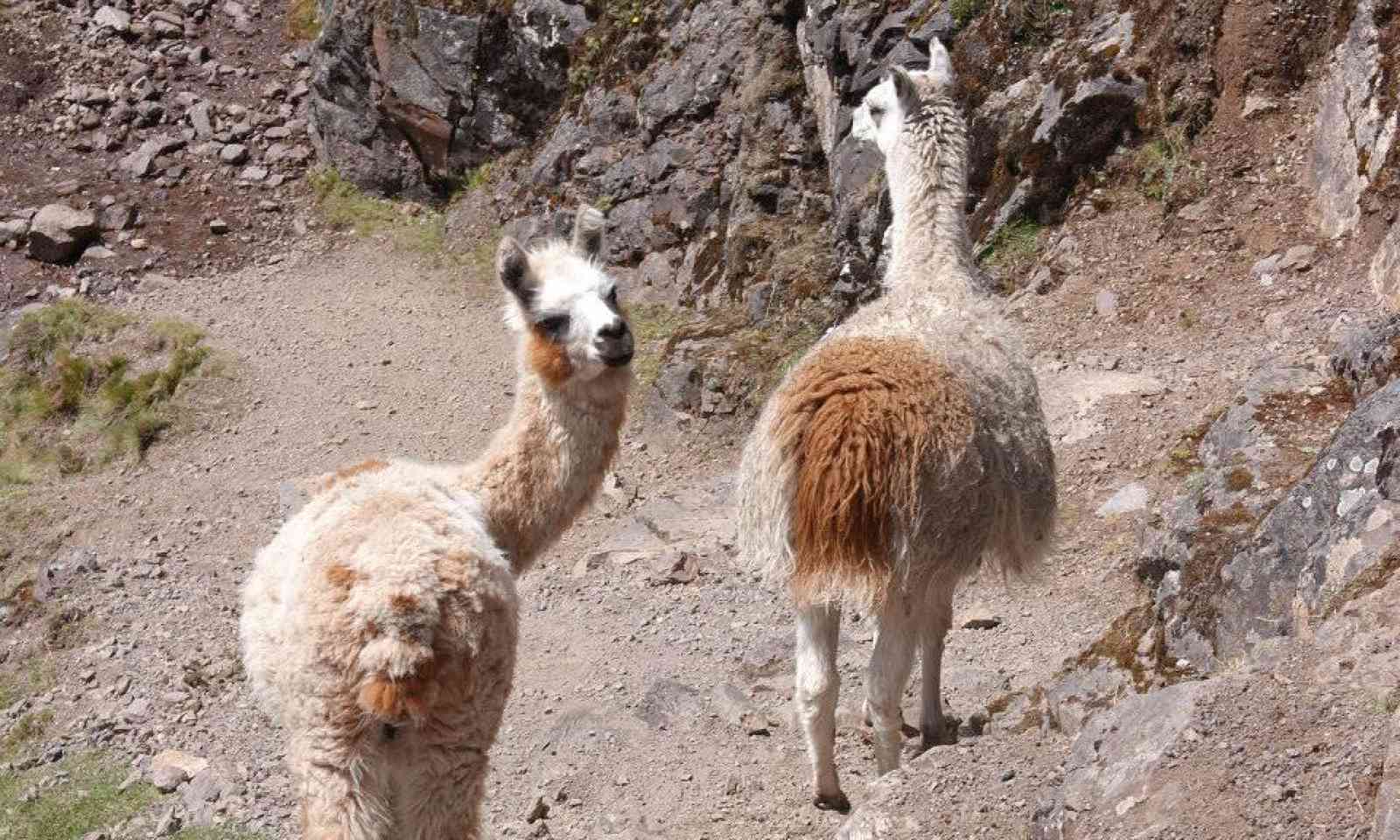 We started early the next morning. It would be the longest and most difficult day, walking up to the highest point at 4,450m and down again to Cancha Cancha at 3,800m. We walked up towards the Quanchis Phaqcha – the seven waterfalls – and made our way up the rock, skirting the downfall to our right. The icy morning at Quishuarani was prolonged due to the height and proximity of the slopes, and the valley below was still shrouded by night. But we had climbed towards the daylight, so we shed our hats and fleeces and reached for the sun cream.

As we resumed our climb, another splash of colour appeared against the slowly fading landscape. A red poncho followed the stream, jumping from one rock to another and steered down the narrow path. Herbert called, took another roll from his bag and held it in the air. The girl came over and stood next to us, no more than six years old and no higher than four feet. She took the gift from his hand, turned on her heel and waved as she continued on her way – her backpack bouncing behind her – before disappearing over the clip and down past the waterfall. She was late for school – in Lares.

After lunch, we only had a short climb left before we go to the top of the pass. The vegetation grew sparse, as did the shelter, and the wind bit away for a while. But it was calm when we reached the top, where we were awarded with views of the glacier across the valley and the gleaming snow-capped peaks of Pitusiray, Sawasiray and Chicon.

Throwing my sights over the contours of the hills below, I could see no-one else. The porters had long passed our horizon, and had probably reached the next village by now. The lakes mirrored the high slopes above them, giving the entire valley yet another dimension – but there was no sense of loneliness, only awe. The knowledge that life still existed in the crevices broke the silence somewhat, and the tired voices I'd heard coming from the house as it stirred this morning seemed to have lifted on the wind and followed me here.

For the rest of the day, we were walking mostly downhill. We made our way over rocks and streams, parting herds of curious alpaca. Gathering pace after the morning's uphill slog, we suffered a few falls from unsteady ground, but soon made it down to Cancha Cancha in time for a cup of tea and a game of football with the villagers. 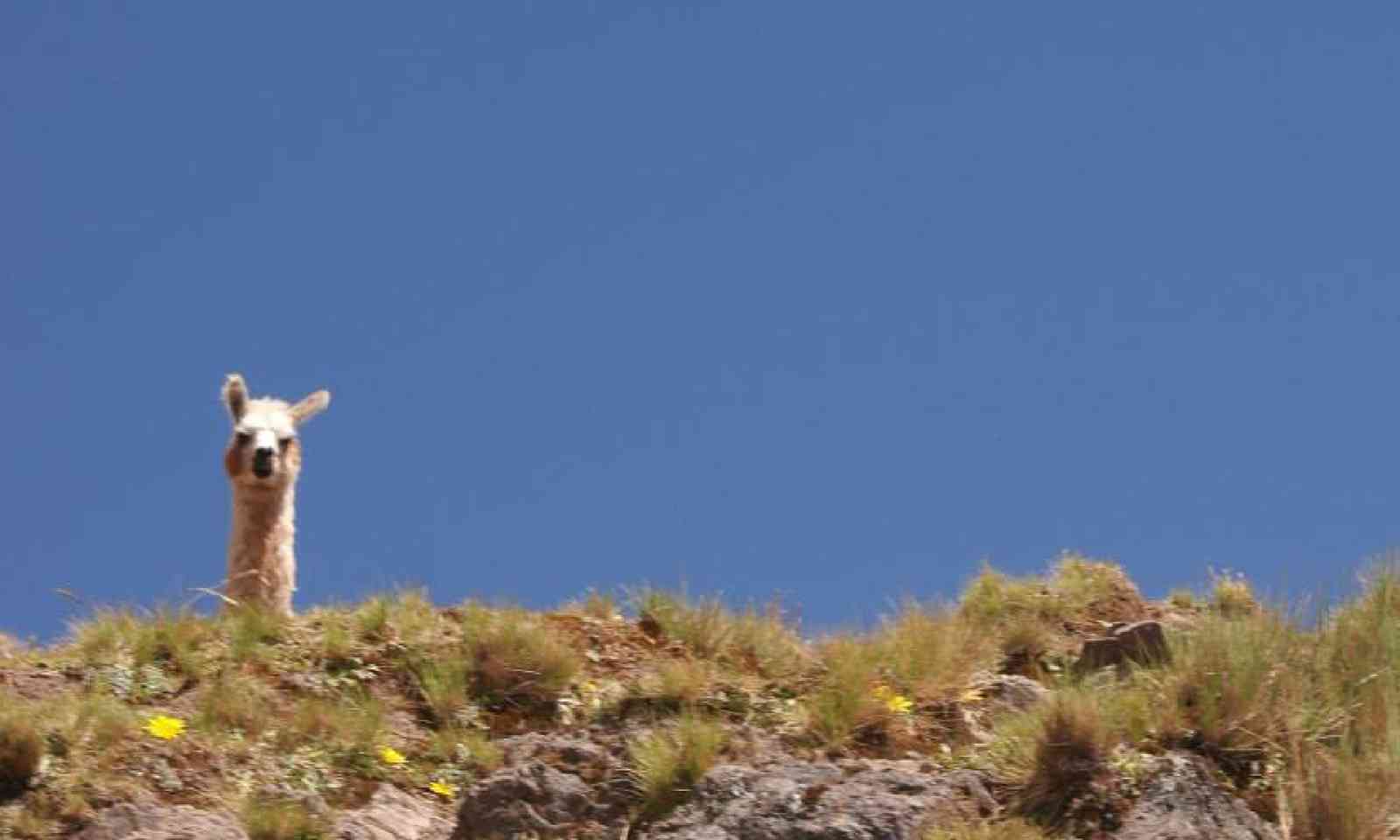 The last day of the hike was hazed by anticipation. Tonight, we'd be at the base of Machu Picchu. We couldn't see it yet – there was still a five-hour walk, a taxi and a train ride to go. We started that morning in a lingering fog, and followed the river downstream. We walked surrounded by lush vegetation. The trees were coated in moss, and delicate bushes and green leaves sprouted from the riverbank.

We remained in shadow for most of the morning, along a stone path which appeared to have been more regularly trodden. But even so, we remained lone walkers for most of the day until we emerged into the sun at Cruzniyoq on the outskirts of Huaran – a village of corn farms, and the end of Pascana. Passing fields of yellow, sunset orange and black, we got onto the road and trudged on our heavy feet towards the family-run shop to await the taxi to Ollantaytambo – where the train would take us to Aguas Calientes.

The train snaked its way through narrow valleys, with each curve in the track revealing a higher or lusher peak than the last. No one was certain whether we would see the iconic dome-like rock on the way, or if we would even recognise it, but everyone had an eye out just in case. I was tired, with my mind on tomorrow's early start. The anticipation was almost off-putting. I put a great deal of responsibility on this ancient site to live up to my expectations. But I suspected that it would never come to heed such a burden.