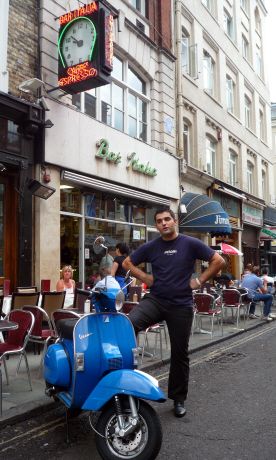 Piaggio gave me one of their new Vespa PXs motor scooters for a week. They’re the same as the old PXs they produced back in the 80's but with a new euro-compliant engine. It was tutti-frutti blue and had Italian plates. I rode it to and from work all week and it wasn't long before I was feeling altogether more continental and chic. I decided to spend our last weekend together venturing forth to the most Italian place in England.

It's Bedford, in case you’re wondering. Whole villages of men from southern Italy were press-ganged into working for the London Brick Company there and brought a little bit of home in their food, hairdressing techniques and penchant for unreliable but exotic looking motors to Bedfordshire.

According to the BBC, there are about 14,000 people of Italian origin living in Bedfordshire, most of these in Bedford itself. The town has an Italian Vice-Consulate, and the local radio station has a weekly programme, called Mondo Italiano, dedicated to its Italian community. And every June the local Italian Society throws the Bedford Italian Festival, primarily to deck the town in green, white and red and eat Italian food.

I set off from Bar Italia, naturally, in Soho. The street was blocked off so I was able to park right outside. One of the waiters came out and insisted on posing for a photo. I asked why the street was closed and he answered that it was his wife's birthday. It was also the day of the Gay Pride march.

I headed north out of central London and after an hour or so, found myself riding through the rolling hills of Cambridgeshire. The fields had been freshly slashed and for a moment I fancifully imagined I was riding through Blighty’s answer to Tuscany. That moment passed when I stopped at Baldock services. Around about lunch time I was approaching Bedford.

My first impression of Bedford was that it didn’t look very Italian. In fact, down by the river, near the boatshed, and beside the imposing Swan Hotel, it looked like any riverside town in Surrey. But it wasn’t long before little Italian flourishes began revealing themselves. La Piazza cafe, laden with Italian memorabilia, in a little kiosk near the markets. The stalls in the market selling Italian delicacies. The Pricecheck supermarket selling Pezzetti coffe makers, biscotti and pasta from the home country. And the hairdressers. Scores of them. With names like Enzo’s and Russo’s and Vincenzo’s.

The real find, however, was the Honey Crust Bakery, a little cafe/deli in a skanky neighbourhood on the edge of town. The lady at the Bedford Tourist Information Centre put me on to it. She said it was popular with builders. I could see why. I got a foot long roll, stuffed with grilled aubergine, goats cheese, salami and various other Italian goodies, a can of Chinotto and an Italian pastry for £3.50.

I rode out to the old London Brick brickworks out near Stewartby and ate my lunch under the shadow of the crumbling smoke stacks and a sign from Brown & Lee saying that the Grade II listed chimneys and kilns were available to buy or let. A wedding was taking place in a church that looked more New England that New Florence, with a fish and chip van outside.

Having visited Bedford I can't say I can imagine visitors from Italy commenting on how much it reminds them of Rome. But if you're after a packet of Agnesia oven-ready cannelloni or a haircut just like the one pappa had back in the 50s then it's well worth making the trip. Especially on Vespa on a sunny day in summer.

Just make sure you pop out to the Honey Crust bakery before you head home. The torta di ricotta are to die for.

The 'new' Vespa PX is available now in blue, red, black or white. Visit the official Vespa website for more details. For more about the Bedford Italian Festival visit the festival website.