The ancient Kushite capital, marooned in the Sudanese desert, must be a top contender for the world’s most impressive least-visited site, reckons Lyn Hughes. Here’s why you should make the trip…

If someone asked you which country has the most pyramids, you’d immediately know the answer, right? A big pat on the back if you said Sudan.

However, even armed with that knowledge, it’s still a jolt when you’re driving the highway north-east of Khartoum and you see the pyramids of Meroe start to appear on the horizon. Rising from the desert like jagged molars, due to their various states of disrepair, they elicit the same spine-tingling awe you feel spotting Stonehenge from the A303.

This area of northern Sudan was once home to the ancient civilisation of Kush, a powerful trading culture that had strong links – and deep rivalries – with the pharaohs of Egypt to the north. For thousands of years, power over the region of Nubia ebbed and flowed along the Nile between Kush and Egypt. Indeed, for a brief period of nearly a century, the Kushite kings – the so-called Black Pharaohs – ruled Egypt.

Countless pyramids remain as legacies of successive Kushite kingdoms. There are nearly 100 at Meroe alone, the oldest dating back to the ninth century BC. At the time, Meroe was the second city of Kush, the capital being at Napata. Following the fall of Napata in around 590 BC, the capital was relocated to Meroe, a position it held until the fourth century AD. During that time, deceased kings and queens were buried under pyramids in the necropolis outside of the city.

French naturalist and mineralogist Frédéric Cailliaud brought the pyramids to the attention of the world in the 1820s, and sparked a graffiti trend by carving his name in the stone. However, the sorry state of many of the Meroe pyramids is primarily due to Italian adventurer Giuseppe Ferlini, who visited in 1834. He had a licence to excavate, but was really a treasure-seeker in search of bounty. In one tomb, belonging to Queen Amanishakheto, he discovered a rich hoard of jewellery. He found little else, but destroyed around 40 pyramids in the process of looking. 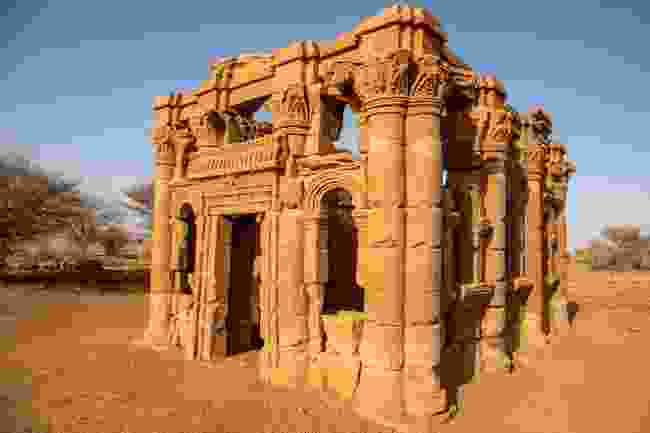 Today, the ancient site of Meroe is bisected by the main north-south highway. The remains of the Royal City lie to the west, towards the Nile, but are closed due to flooding in 2020. Even when they’re open, you need a good guide and a powerful imagination to really appreciate what little is left.

The Royal Cemetery lies to the east of road. This is Sudan’s main tourist attraction, not that you’d know. As it only sees a few thousand visitors a year, you may well have the place to yourself. The pyramids are split between two main clusters, the Southern necropolis, which is older, and the Northern, which is better preserved. To enter the archaeological site you need to pass a few handicraft stalls – and may be offered a camel ride – but it’s all very lowkey.

The pyramids aren’t as big as those found in Egypt – they have much smaller bases and steeper sides, and many have temple structures attached. Also unlike Egypt’s tombs, the bodies here were buried beneath the pyramids rather than laid to rest within. A few have been reconstructed, which UNESCO tends to frown upon. However, in 2011 the Archaeological Sites of the Island of Meroe, which also includes the mysterious temple complex of Musawwarat es-Sufra and the Meroitic temples of Naqa, was granted World Heritage status.

As you visit, it becomes clear how little is known about the Kingdom of Kush and day to day life in Meroe. Archaeologists admit to relying mostly on theory and speculation. But that is all part of the appeal. Just sit in the shadow of a pyramid, slowly soak up the atmosphere and ponder the mystery of one of the great ancient civilisations. 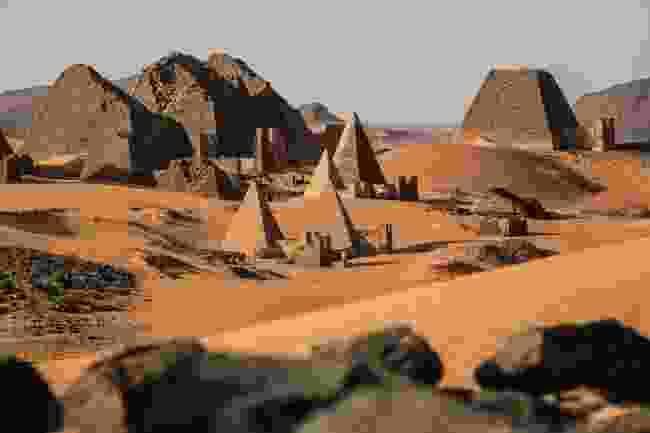 The pyramids of Meroe, Sudan (Shutterstock)

Getting there: There are no direct flights from the UK to Khartoum. Turkish Airlines flies to Khartoum via Istanbul, Egyptair flies via Cairo.

Getting around: It’s possible to catch a bus from Khartoum to Meroe via Shendi. But we recommend using a good tour operator and guide, and visiting other historic sites. ITC Sudan is an Italian-owned company specialising in cultural tours, used by incoming companies and independent travellers.

When to go: October to April, when temperatures are bearable.

Accommodation: Meroe Camp, owned by ITC (details above), overlooks the pyramids – stay here to easily access Meroe in the morning, when it’s coolest, and to see the sun set over the site. Accommodation is currently in simple, comfortable tents but new thatched stone bungalows are being built to replace them. Food is a good mix of Italian and Sudanese dishes.

Read more about Sudan and Egypt:

Riddles of the sands: northern Sudan

Cruise along the re-opened Nile route

9 awesome pyramids... that aren't in Egypt