On the paradise beaches of Costa Rica, thousands of sea turtles make their nests in one of the world's greatest wildlife spectacles. Welcome to the 'arribada'

The sun rose on a battlefield that was thick with flying dust. Hunched shapes lay in tortured postures, writhing on the sand. Others crawled, inch by painful inch, towards the relative cover of the waves – where sharks and crocodiles waited.

In spite of imminent danger, exhaustion forced them to stop every ten steps, gasping. Around them hundreds of vultures flapped and bickered. Thunder rolled in from the watery horizon and, in the gloomy mangroves, coyotes could be heard whining at the lightning that drove them off the beach.

Beyond those twisted, briny trees, the tropical forest of Guanacaste cloaked the hills in a blanket that stretched inland almost to the chain of volcanoes that forms Costa Rica’s spine. We had trekked through much of that forest during the previous week – under the accusing bellows of territorial howler monkeys – and arrived on remote Nancite Beach during a brief, golden sunset the evening before.

As soon as we stepped out onto the sand we sensed the mood of anticipation that seemed to fill the whole bay. A few frock-coated vultures, hopping like busy undertakers, were there to meet us. Though we could see nothing among the gilded waves, we were aware that something was amassing, ready to converge on this short stretch of Central American coastline. This particular beach is one of the only places in the world where massive numbers of endangered olive ridley turtles swarm in the phenomenon known as the arribada (literally ‘the coming up’). Nobody knows how the turtles are able to coordinate themselves in order to all lay their eggs over a period of a few days, or why they pick this particular stretch of sand in preference to other, apparently identical, patches of coastal real estate next door.

Costa Rica is home to six of the world’s seven species of marine turtles and, despite only being about the size of Wales, the aptly named Rich Coast harbours an incredible 6% of all the world’s biodiversity. In ecological geek-speak, Costa Rica has been described as ‘a mother lode of eco-diversity’, but for the amateur wildlife enthusiast it is simply one of the world’s last paradises.

This section of the Pan-American land-bridge is home to an unusually cosmopolitan community: South American jaguars share territories with North American pumas; coatimundis hunt alongside coyotes; collared peccaries browse with white-tailed deer. Then there are kinkajous (a member of the raccoon family), possums, monkeys, squirrels, ocelots, foxes, macaws, quetzals... the list goes on.


There are over 800 species of birds, 220 reptiles and 10,000 plant species, and the National Biodiversity Institute is already into its second decade of counting insects! For a splash of colour, the country has been blessed with 1,200 orchids, around 50 hummingbirds and over 1,000 butterflies, including the magnificent blue morpho, which the indigenous tribes believed to be fallen bits of heaven. Less than a century ago the country was still almost completely covered in impenetrable rainforest. The miracle is that Costa Rica realised the importance of its unique natural riches in the nick of time – more surprising still for such a small and not at all affluent country – and resisted the temptation to exploit them wholesale in search of a quick buck.

Today the country is divided into 26 conservation areas. But, more importantly, the people live cheek-by-jowl with their wildlife in a way that you are unlikely to find elsewhere; you can often spot more animals during a single walk through a Costa Rican village than you will see in the greatest national parks of many other countries.

This doesn’t mean there are not still problems: deforestation, a result of the burgeoning population, is threatening sensitive eco-climates; degradation is rife in over-exploited reserves near the capital; and illegal fishing and poaching continues.

While the olive ridley turtles at Nancite Beach have to deal with their natural predators, they are protected from the most voracious of egg thieves: the human poachers who sell the eggs as pick-me-up tonics in the bars of the capital.

Nancite, though part of Santa Rosa National Park, is off-limits to poachers and tourists alike, and to earn our entry permits we had to help with whatever work was needed at the research station. So on arrival we reported to the collection of beachside shacks that Lenin, the Costa Rican guard, was privileged to call his ‘office’. 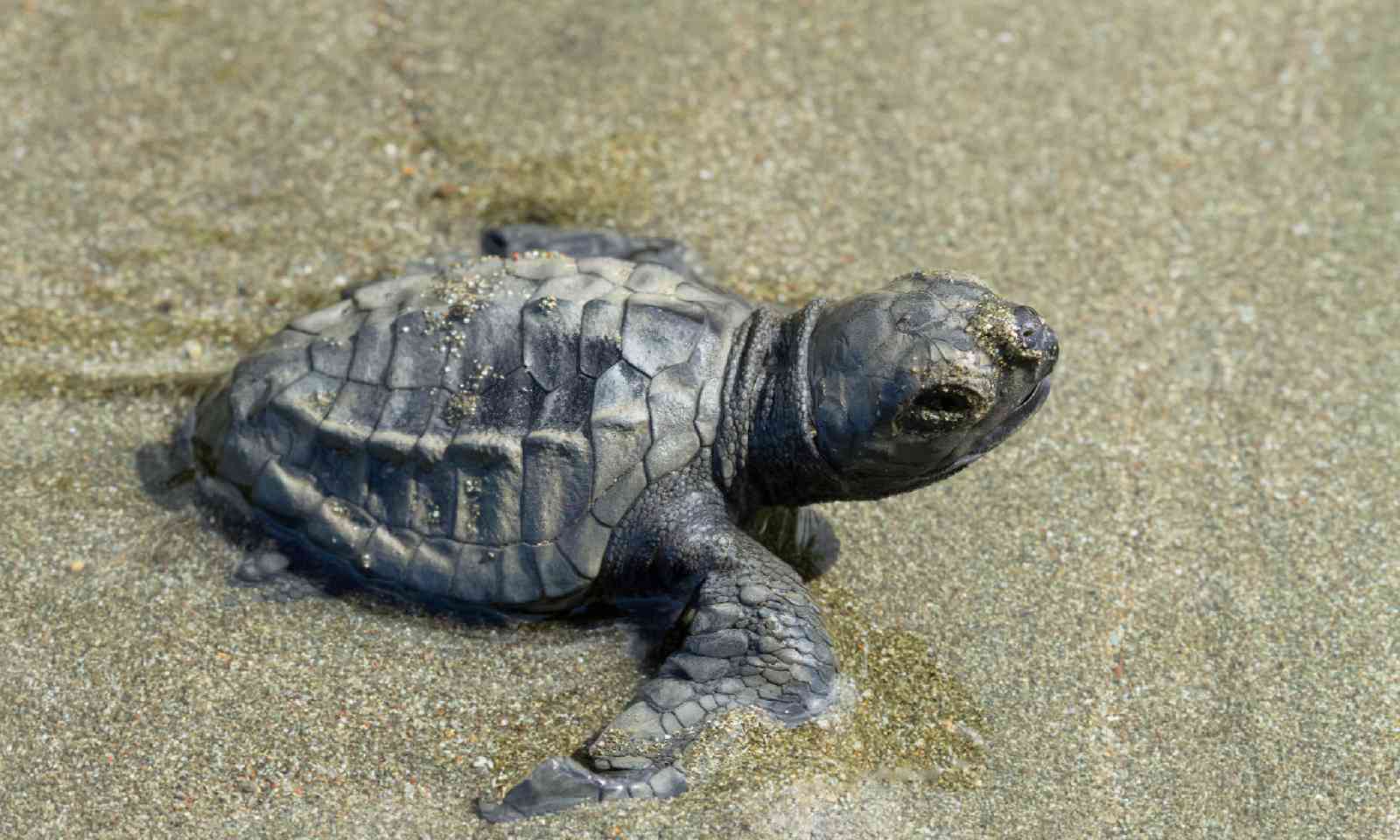 Although even Lenin could not yet have known it, we had arrived by pure chance on the night of one of the biggest arribadas of the year. By 9pm the first turtles were already emerging. In the moonlight we could see shiny black domes rising up on the water’s edge, and now and then a head would bob up out of the waves where the males had already congregated.

We were careful to keep our distance as the first ‘scouts’ peered around shortsightedly, trying to determine whether the coast was clear. The long, hard slog up the beach, on fins perfectly designed to propel them for hundreds of watery miles, was almost painful to watch.

These first arrivals were mostly tired old maids, struggling up the sand to offer their eggs – and, if necessary, their bodies – to the waiting predators for the benefit of the younger, prime layers who would come later with the main ‘invasion’. They may have understood that the mangroves were a source of danger and that their ageing frames would make an easy meal for a jaguar or crocodile, but they would not be swayed from their mission and, once they started digging, seemed totally oblivious to our presence.

The oldest of these veterans was over 50 and weighed about 45kg. Their faces were strangely human, with their mournful, down-turned mouths and tearful eyes that wept as a reaction to the unaccustomed dryness. The youngest may have been cruising the Pacific for 15 years, never having been on dry land until feeling irresistibly drawn by the scented waters that flow off this beach. 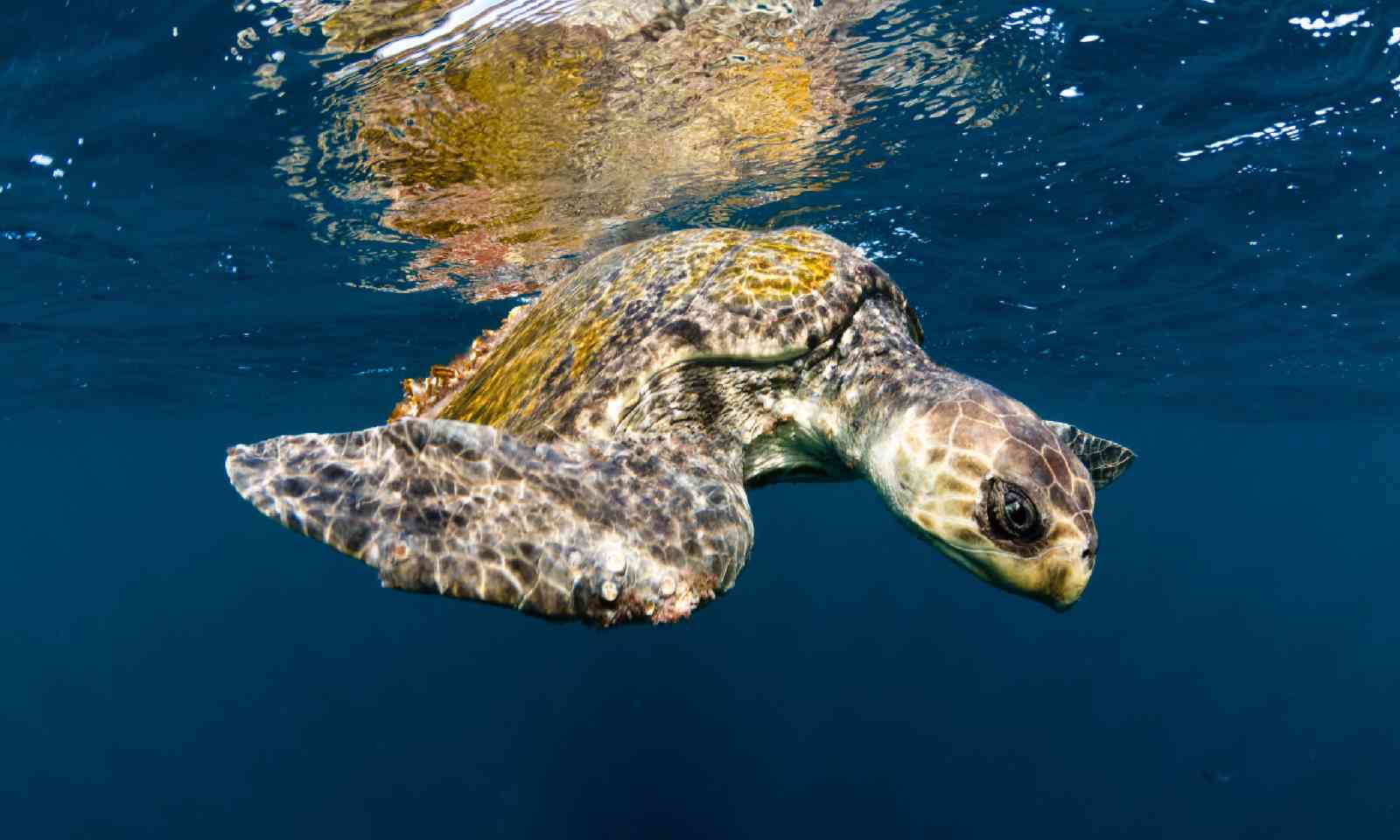 Lenin assigned us each a section to survey. “A turtle takes an average of an hour to come out of the water, lay her eggs and get back to the sea,” he explained. “So we only have to do a count every hour to know how many turtles have visited.”

These figures provide the only accurate estimate of the world’s olive ridley population. They are not reassuring.

Around 60,000 turtles visited Nancite in 1999, but by 2001 the figure had dropped to 17,000. Very little is known about the arribada phenomenon, but naturalists believe that fluctuations may always have been the norm and that large numbers of turtles will periodically abandon a beach to let it lay fallow so that they do not contaminate it with their own rotting eggs. Where they go to when they leave Nancite is another part of the mystery.

By 11pm there was a constant stream of turtle traffic heading stoically to and from the sea. It seemed that each one had a fixed idea of exactly how far up the beach she wanted to be. Some settled for the high-tide line and others continued almost into the trees before digging a pit with their hind fins.

There were a few battle-scarred old matrons who barely got to the edge of the water before they started to dig, obviously thinking, “That’s it, I’ve done my bit”. Position decided, each turtle would then lay a batch of around 50 eggs before filling in the nest and tamping it hard by pounding her weight from side to side. 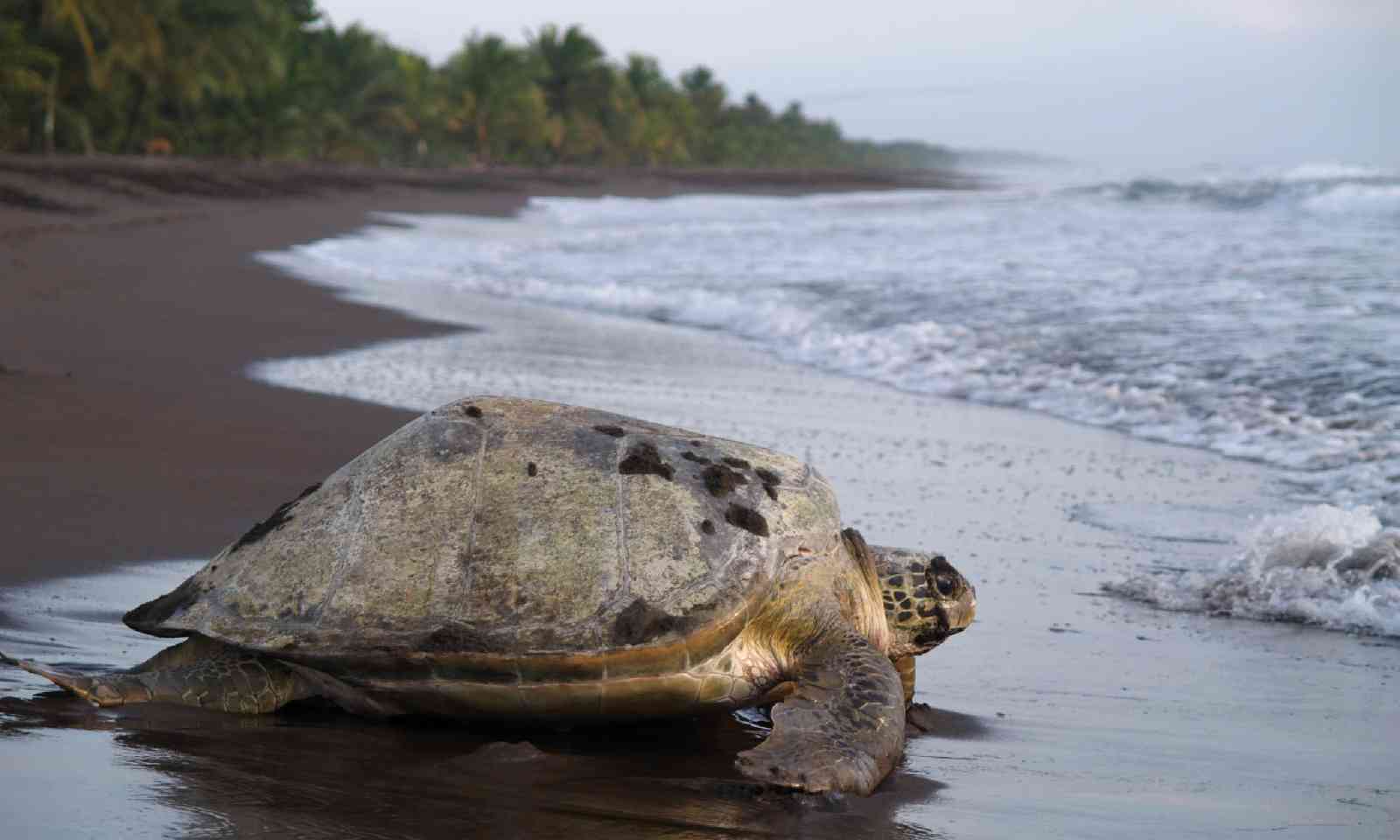 The main landing came in the early hours of the morning. It was a veritable invasion of protein, designed to overwhelm the hunger of any predator – jaguars, pumas, crocodiles, coyotes, coatimundis, raccoons, vultures and even hermit crabs, which would gorge themselves on overturned nests. Arriving in sufficiently intimidating numbers, the turtles have been known to drive predators off the beach.

As we patrolled we did our best to disperse the vultures that were now confident enough to snatch the eggs even as they emerged from the labouring mothers. Lenin showed us a turtle carcass and the tracks of a large crocodile at the end of the beach. Though we worked by moonlight, we occasionally shone our torch-beams to illuminate the eyes of coyotes and raccoons, digging frantically for fresh eggs.

A final corps of veterans came later, laying their eggs as a protective covering on top of this immense clutch. By the time the stragglers had arrived in the hazy dawn we had walked miles between the gasping creatures, and had counted 2,464 turtles.

It was sad – almost tear-inducing – to witness the risks and the strain that these creatures underwent. Hundreds of times I watched that gruelling climb up the beach into the alien, dangerous land; the exhausting digging, laying, burying and pounding; and finally the even more tiring struggle back to run the gauntlet of marine predators.


From the haunting memories of that incredible night some images stand out: the constant thump of pounding belly-plates, like minor earthquakes resonating through the sand; the unfertilised juvenile turtles that sat patiently on their nests, and then filled them back in without laying anything; the stubborn female who butted her head against my back because she wanted to lay her eggs on the exact patch of sand that I had chosen for a well-earned rest. 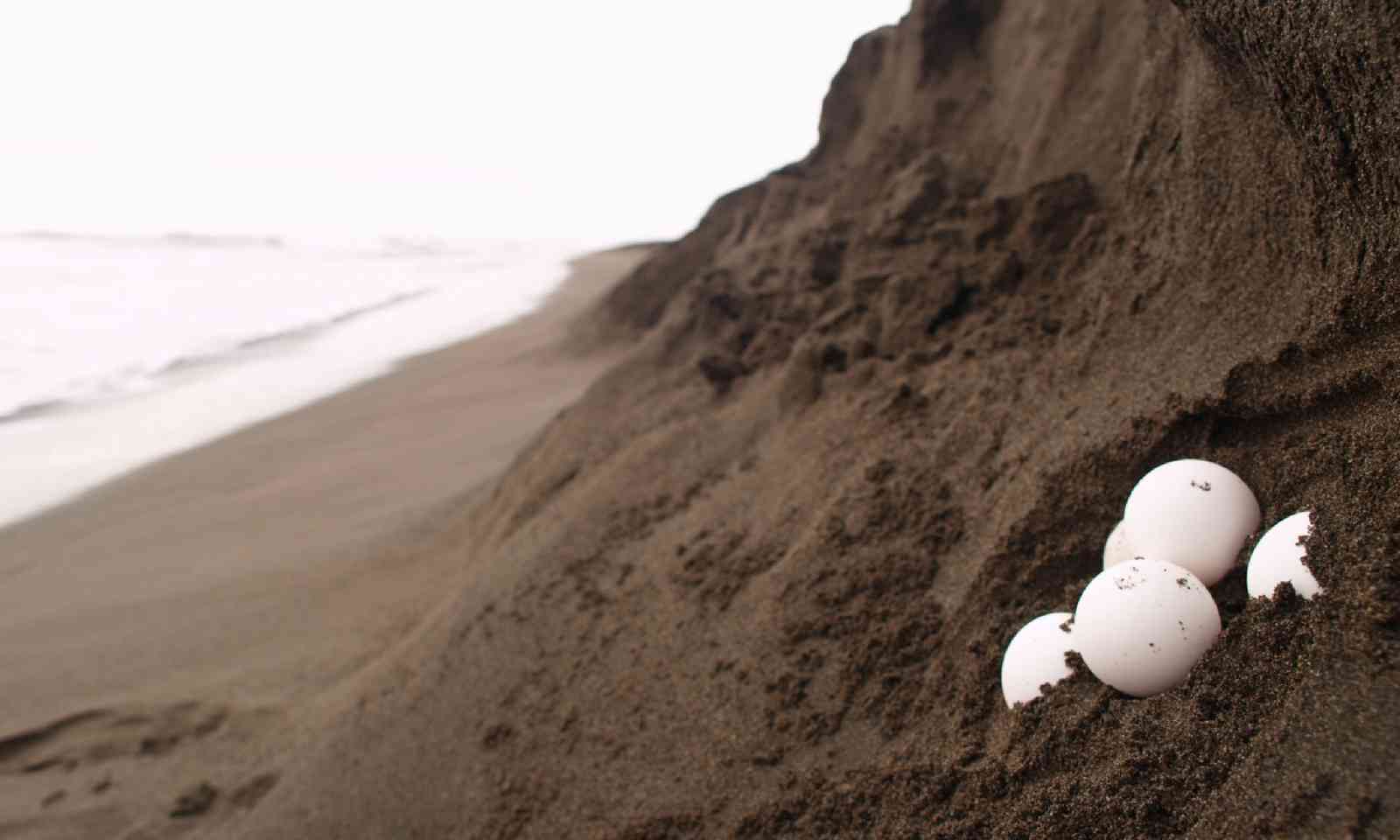 But among the thousands of amphibians that joined this incredible migration – and even among the carnage of dawn, when the vultures, corpses and pillaged nests became fully visible – there was one particular turtle that seemed to epitomise this desperately fatalistic drive of survival that has continued for 100 million years.

Sometime in her earlier days she had been mauled by a shark and lost the back of her shell and most of her right fin. Somehow she had survived and now, smaller than her companions, she was something of a runt.

She was one of nature’s ‘fall-girls’ – living only to take the brunt of whatever misfortune might befall her species. With her exposed, wrinkled backside she would have been a prime target for the coyote that slunk away as we arrived. We stayed close to guard her and to keep away the vultures that were waiting to snatch her eggs.

To add to the calamity, she had chosen to lay right on top of another nest and, while her crippled fin uselessly went through the digging motions, her good one was making a sandy omelette out of healthy eggs. We pulled unbroken eggs away from her mangled back end and by the time she started laying we had a little heap of seven leathery lottery balls to slip back into the hole.

With single-minded determination she carried out her task and, still ignoring us, turned back for the long crawl to the sea. My heart was in my mouth as I watched her let the water take her weight and slip through the waves towards the ocean.

The entire ordeal was like a lottery. The fate of this one crippled old lady was unimportant in comparison with the survival of the species, and it would be nature’s way if she should be sacrificed to save another, more able, breeder.


With odds of a thousand-to-one against a turtle surviving to breed, the seven eggs that we ‘replanted’ were virtually meaningless. But after experiencing this humbling night with these wonderful creatures, it felt good to do whatever we could to stack the odds even a little bit more in their favour.

The best time to travel on the Pacific side is during the dry season, from December to April. The height of the nesting season for olive ridley turtles falls in September and October. On the Caribbean slopes, the drier season is February to June.