To where – and how – does a travel legend retire? Well, we modestly get some clues from Sir Patrick Leigh Fermor, by nosing around his fabled literary retreat in the Peloponnese

"This is how it happens everywhere. Someone makes a beginning and others follow,” smiled Elpida Belogianni, fondly nudging an old picture frame. The proof was all around me. I was stood in the lounge of one of Britain’s most celebrated travel writers, the late Sir Patrick ‘Paddy’ Leigh Fermor, gazing at an old photo of the home he’d built here over 50 years ago in a lonely bay in Greece. Back then, little but a thick stubble of macquis surrounded it; now it was part of the tiny, leafy suburb of Kardamyli.

Elpida was Fermor’s housekeeper and knew him well. Her words seemed a fitting epitaph. Whereas some stumble upon their place in the world, others carve one. As a traveller, soldier and author, Paddy had searched longer than most when in the 1960s he and his wife, Joan, settled here as ‘the only foreigners in the Mani’, a region deep in the southern Peloponnese, trailing visiting artists, writers and politicians in their wake. Now the couple’s old home, left in the care of the Benaki Museum since Paddy’s death in 2011, has opened as a seasonal boutique stay. But while Covid rules meant that I couldn’t stay overnight, in Elpida’s company I found something more: a house that seemed to tell a hidden story. 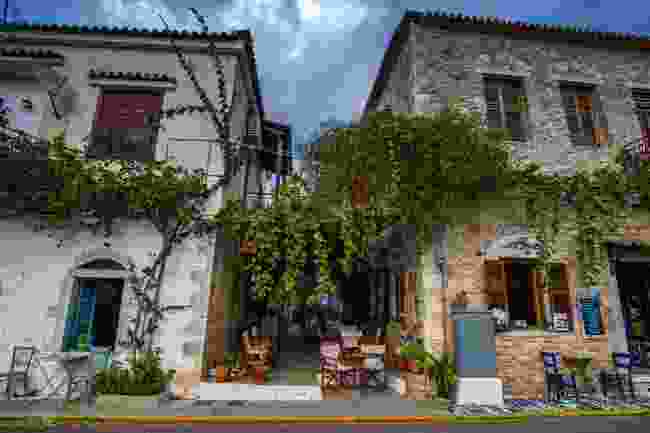 Before my visit I’d contacted Giorgos Giannakeas. He was around 11 years old when the Fermors arrived. His father had helped build the house, and his late mother, Lela, was their cook for years. He now runs the taverna she opened, where Paddy would eat every Thursday, without fail.

“People would ask him why the Mani and not Crete [where he’d been stationed during the Second World War],” Giorgos told me. “He said if he’d gone there, he’d never write anything because he’d be drunk all the time.”

In truth, Paddy never took the easy route, whether walking across Europe at 18 or swimming the Hellespont, aged 69. So why not build an impossible house?

“There were no roads here,” explained Giorgos. “Everything had to be delivered by hand or by donkey, with heavy stones carried by up to a dozen men.” It was backbreaking, taking two years to complete as the couple camped nearby. The 1960s was also a difficult time here, with the civil war (1946-49) being recent history. Locals knew Paddy by the name of ‘Mihali’, the nom de guerre he’d adopted in Crete when he’d helped kidnap a German general in 1944. “He even added it to his passport,” Elpida told me later. But such tales stoked rumours.

“Some thought he was searching for money the British army had left behind in Kalamitsi,” laughed Giorgos. “Others thought he was a spy and submarines were waiting in the bay.” When a bomb was later planted under his car (luckily injuring no one), it wasn’t entirely surprising.

As we padded from room to room, Elpida pointed out details inspired by Fermor’s travels, from monastic-style stonework recalling his days on Mount Athos, to a fireplace in the manner of a Romanian palace he’d once visited – journeys recalled in the posthumously published The Broken Road. I gained the creeping impression of the house as his final travelogue, only plotted in stone instead of ink.

It chimed with something Giorgos had said. Paddy used an architect but would laboriously draw all the details himself, often late into the evening. “He built the house as he wanted… they’d build something, knock it down, then start again if it wasn’t right.”

Outside, we walked on a terrace daubed with mosaics created by his friend, the artist Nikos Ghika. Paddy had tipped local kids to fetch colourful pebbles from the beach, Elpida told me. Scattering the floor were curlicued serpents (“Paddy loved snakes”), cats (“Joan’s favourite”), and a giant compass, its points marked in Greek. With each step I started to feel I was walking in one of those endless Fermor sentences, unwavering and bubbling over with information.

Our tour ended in the study, where Paddy’s huge leather writing desk dominated the room. He’d sleep here often, in a bed just off it. The house had been designed for large parties, and guests would moor below, free to stumble up and use the facilities. Here he could sequester himself when needed. It felt private and special, but I didn’t feel like an intruder. Elpida had been right after all: where Paddy went, you couldn’t help but follow.