Travel in the time of ebola

Round-the-world cyclist reaches West Africa to find borders closing in an attempt to control Ebola. Will this mean the end of his journey?

Stateless people lived in the handful of scruffy villages lining the 20-miles of no-man's land between Congo and Cameroon. I was muddy and shirtless when I rounded a corner and unexpectedly arrived at the makeshift hut housing the immigration office. It looked like a makeshift slum house but an immaculately-dressed guard stepped out and started shouting at me. His furious French suggested he was saying something like "How dare you arrive here in such an indecent state? What if there had been women here? Go away and put a shirt on!"

I wheeled my bike back around the corner to dress. While doing so, I spotted two village women emerge from the bushes with water containers. They wandered off down the track, topless like me.

It took an hour for the immigration officer to be fetched. He welcomed me kindly, stamped me in and wished me luck. The track bobbed over tightly-packed hills and splashed though clear streams between them. The humidity felt intensified by the close-pressing trees which thankfully kept the sun off. I had no map and everyone I asked had different opinions on where I would next find a shop. I was completely out of food at the end of 30 miles. There had been only one village which had no shop, and where nobody had extra food to sell me. 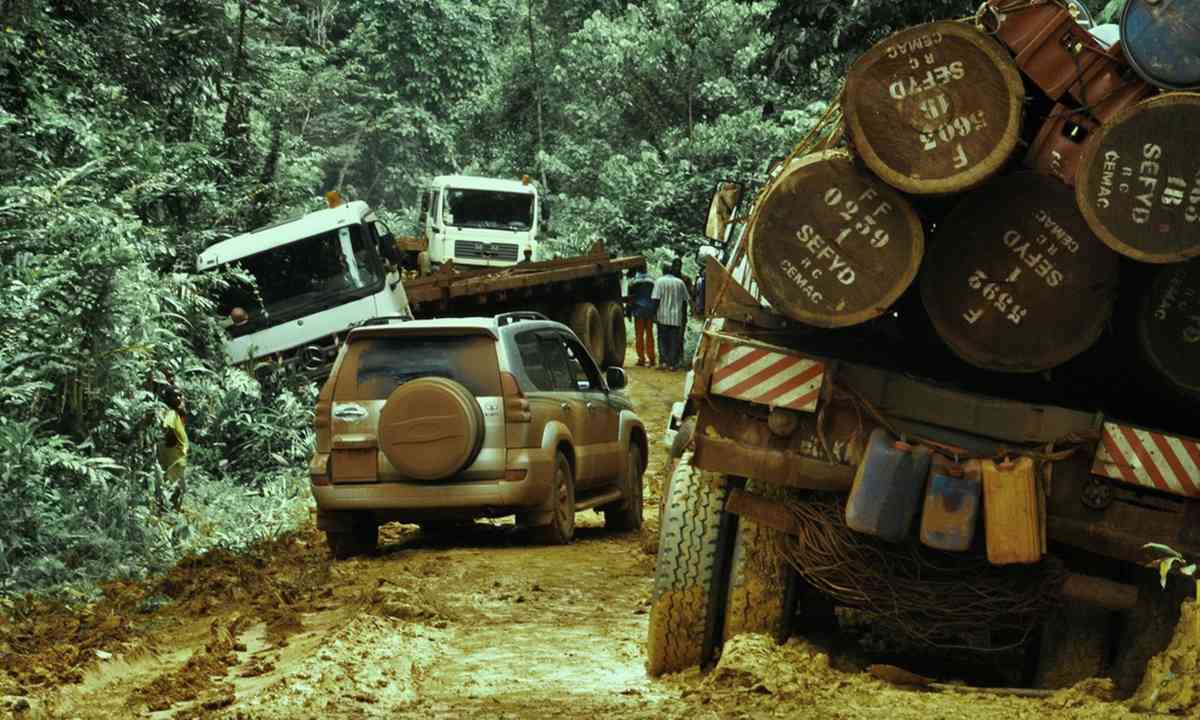 I was experiencing hunger cramps when I arrived at a jam of ten or so trucks, each with formidable trunks of African hardwood strapped to their backs. The path had become a cloying pit of rich red mud. I watched as some of the trucks wiggled hopelessly halfway into the foliage in their attempts to free themselves. It was odd to see 20-ton vehicles sliding slowly sideways while their wheels span uselessly within the eternal embrace of mud.

Barefooted men squelched and sucked their way up and down the problem with their trousers rolled to the knees. I joined them and was soon speaking to Gilbert: a friendly man in his 30s from Cameroon’s Anglophone southwest. Gilbert was on his way back to the capital having delivered barrels of petrol to power the generators in the region’s various telecommunications towers.

It was obvious that I couldn’t cycle this track, and the reports of the next 50 miles were similar. I accepted a space in the empty back of Gilbert’s truck and we eased our way past the heavily-laden logging vehicles. After three hours of skidding and getting stuck several times, the track improved and I got back on the bike. I bought some smoked bushmeat in a village to keep me going. I think it was antelope.

It was early morning when I arrived in Djoum and managed to better stock my food bags. A petrol pump attendant mentioned something to me about the border with Nigeria (my next destination) closing due to Ebola. There was no power in the town so I couldn’t verify this with the internet. I tried to bury the potential roadblock in my mind while pedalling onwards along a rattling stony track.

The path climbed and the jungle thinned but my fretting increased about what I might do if the border rumour were true. Little Bastard’s (my bicycle’s) frame cracked by the seat post again and I was forced to stand on the pedals. My strength sapped quickly. 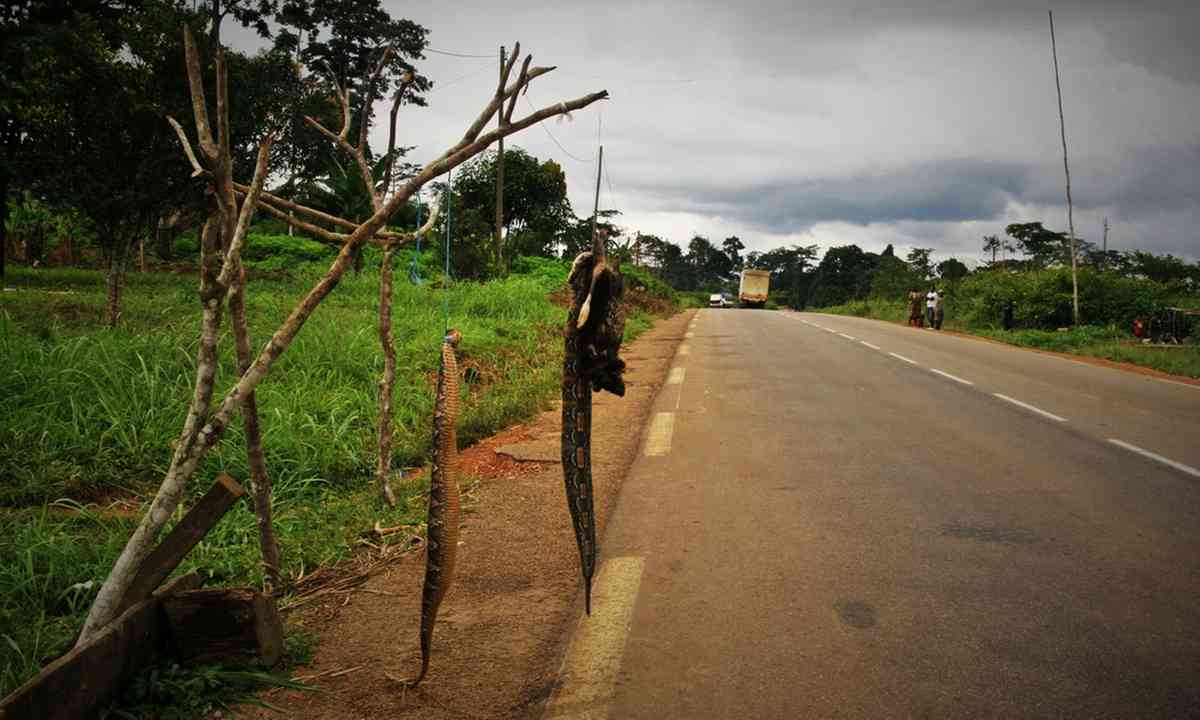 I was keen to reach Yaoundé and get on the internet. The next few months of my life would hinge on what I found there and what subsequent decisions I made. I sped past numerous roadside vendors flogging fat snakes, porcupines and other bushmeats. The animals all hung from tree branches by their necks and span slowly in the warm breeze.

There were an increasingly frequent series of roadblocks on the way into the capital. At each one I was stopped and my passport was inspected. Many asked me absurd questions and treated me with suspicion. In the eyes of the police, my burned and bearded face looked Arabic and the high security alert was due to recent cross-border raids made by the fundamentalist Islamic group Boko Haram. As I cycled through the suburbs, many people shouted “Arab” and “Boko Haram” at me.

I was approaching the end of a geopolitical cul de sac: the border with Nigeria was closed for ebola, Niger’s for Boko Haram, and Central African Republic’s for a civil war. I would have to fly.

Charlie Walker is a bicycle adventurer on a four-year, 40,000 mile cycling trip to the four corners of the Earth. He is hoping to raise £20,000 for a variety of charities. You can follow his exploits on his website, CharlieWalkerExplore.