Planning a Christmassy short break? Whether you fancy a medieval meander in Guteneck or a taste of tradition in Munich, Germany's a festive wonder. Our guide reveals the best German Christmas markets...

Please note: These Christmas markets may be affected by the ongoing COVID-19 pandemic. We will update this page when we have further information. 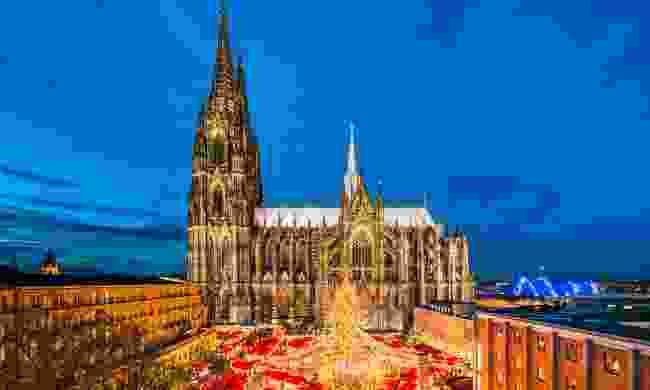 Set before the gothic backdrop of Cologne Cathedral and under the largest Christmas tree in all of the Rhine, is Weihnachtsmarkt Am Kölner Dom – the biggest and most popular Christmas market in Cologne. Explore its glittering wooden pavilions to find handmade gifts including wood carvings, tree decorations and soaps.

With a particular emphasis on regional organic foods, this is a perfect place for foodie travellers. Grab yourself a mug and fill up on gluhwein, before joining in the festivities with song and dance in the streets. There's entertainment provided for all ages, including young ones, who can enjoy a ride on an old-fashioned merry-go-round, or spin their fate on the wheel of fortune.

Elsewhere in the city you'll find the Angel’s Christmas Market, which is renowned as Cologne’s oldest. It features various artisan stalls and mulled wine stands around the shopping district, and has an added sprinkling of magic by angels spreading glitter through alleyways. With a chance of luck, you may even see Santa Clause riding around on a horse.

Other markets worth visiting include the beautiful Old Market Christmas located at the front of the town hall, as well as the Harbour Christmas Market by the chocolate factory. 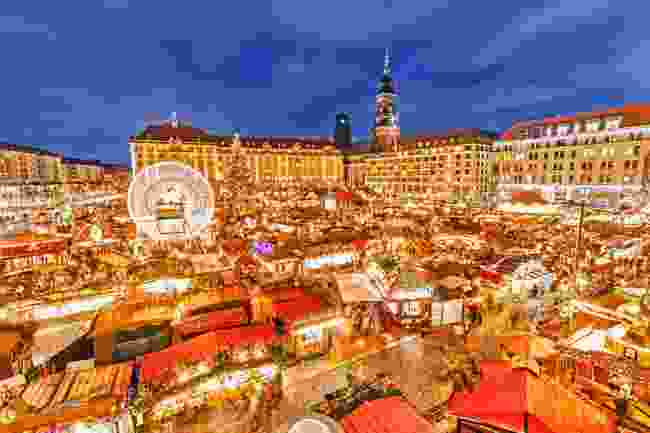 With a blaze of lights glittering over the river, a thick scent of mulled wine in the air, the sound of festive music and the twirling of carousels, Dresden Striezelmarkt sets the atmosphere for Christmas cheer.

Not only is it the oldest Christmas market in Germany, but it also showcased the world's tallest Christmas pyramid in 1999, which reached a staggering height of 14.62 metres. The most recent record was crowned at Berlin Christmas Market at a height of 20 metres.

While exploring the stalls, keep an eye out for traditional handcrafted nutcrackers that are favourites at the market, as well as the Dresden Pflaumentoffel – a small chimney sweep made out of dates. Aside from miniature statues, visitors can indulge in Germany's classic stollen fruit loaf.

Locals love it so much that there's even a market day dedicated to stollen, which sees a colourful parade and giant fruit bread sweep through the baroque city. You can even try your own hand at making some at the Stollenfest baking stand. 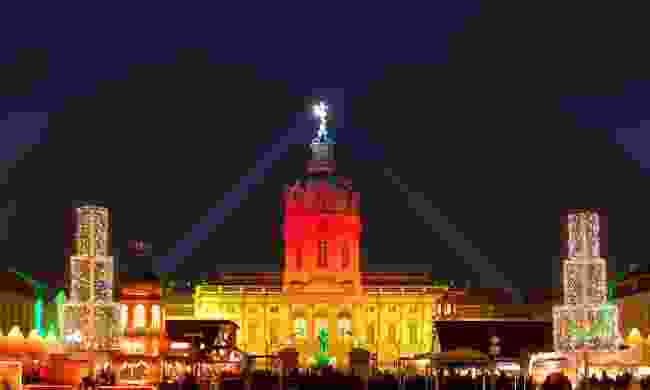 Like in Cologne, you'll find yourself spoilt for choice in Berlin during the festive season. For a magical experience to remember, head to Charlottenburg Palace where you can pick your way through gifted crafts and wintertime treats, including obligatory roasted chestnuts. Those with children can make their way to the winter forest for a spin on the carousel, or a ride on the train.

Believed to be the most beautiful square in Berlin, Gendarmenmarkt is particularly eye-catching during the festive season. Browse as craftsmen intricately carve wooden gifts and dressmakers sew in their stalls. It is also a popular spot for artists to gather and display their work; expect everything from jugglers and fire-eaters, to a variety of musical performances.

The 17th Fairy-Tale Christmas Market at Jagdschloss Grunewald makes for a scenic day trip not far from the city centre. Set beside a reflective lakeside, market stalls open in the courtyard of Berlin's oldest palace on Advent weekends, where visitors are greeted by fairy tale characters such as Hansel and Gretel. 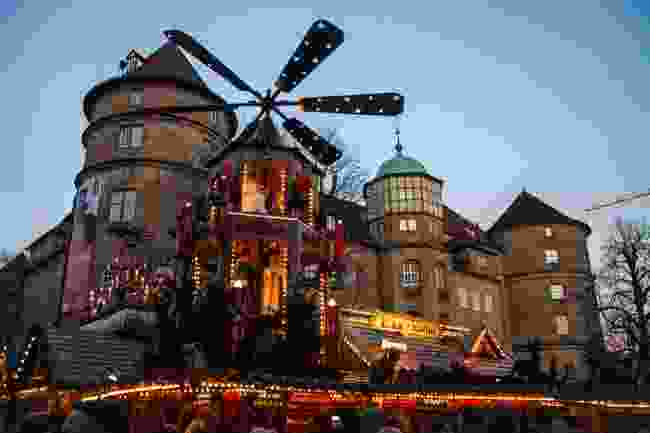 Boasting almost 300 ornately decorated stalls, with prizes handed out for the best, it’s no surprise the Stuttgarter Weihnachtsmarkt is regarded as one of Europe’s most beautiful.

Take a medieval meander before the imposing backdrop of the New Castle, Old Castle and Collegiate Church. Be charmed by the choirs, fill up on local delicacies and have a slipping good time at the ice rink.

Close by is the energetic Esslingen Medieval Market, where costume-clad stilt-walkers and renowned European performers take to the timber-house lined streets to take the town and its visitors back to the Middle Ages. Expect spine-tingling performances and watch out for pranksters. 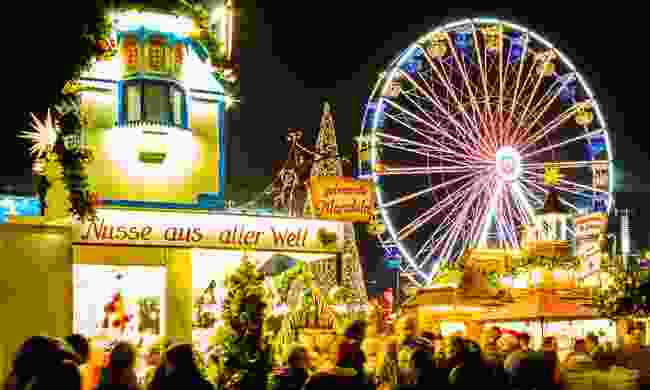 Centred around the historic Marketplatz, around 300 stalls, dwarfed by the bulk of the Old Town Hall make up the Leipziger Weihnachtsmarkt – the second oldest in Germany, dating back to 1458. The thick of the market thins out through the adjoining streets with a bombardment of lights, music and parades streaming through it all.

Keep your eyes peeled for the giant Advent Calendar and board the 38m-high Ferris Wheel for sparkle-studded views over the square. 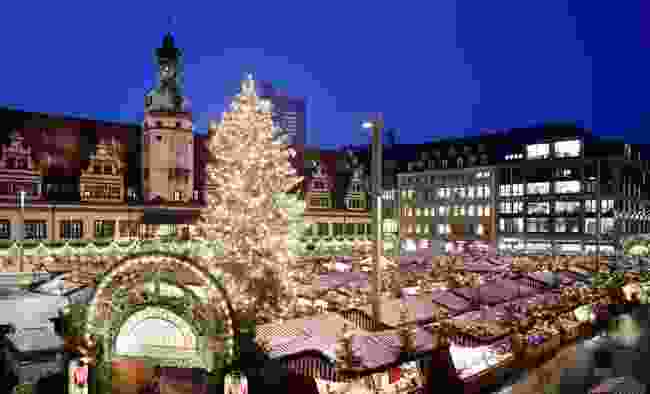 “Did you know? The popular Christmas song ‘Silent Night’ first found its fame in Leipzig.

Four peasant children known as the Strasser siblings walked for a month into Leipzig to sell gloves. When that plan failed, they started singing Silent Night...” 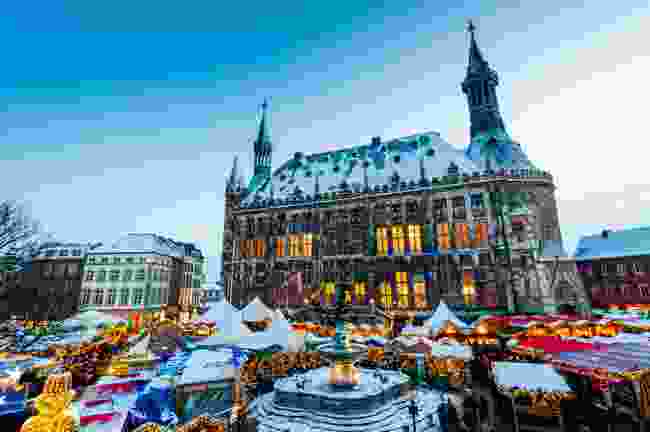 Each winter, the grounds before the flood-lit Aachen Cathedral and Town Hall are transformed into an authentic Christmas village, with clusters of wooden chalets drawing the Christmas crowds to Aachener Weihnachtsmarkt.

Don’t just eat a famous Aachen Printen (gingerbread) but meet the six-metre Printen gingerbread man mascot. Fill stockings for everyone with gifts ranging from the very traditional to the extra special and make time to appreciate the carefully erected fair that’s so well loved by locals and visitors alike. 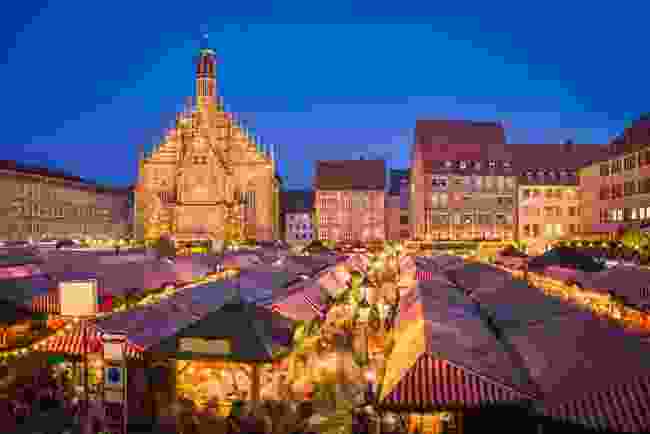 Packed into the Old Town, the gold-hued Nuremberg Christkindlesmarkt oozes with history and tradition. Attend the opening ceremony outside the church and look up at the balcony to hear the festive prologue being bellowed out amongst a flair of trumpets.

Order a drei im weggla (three in a roll) Nuermberg Brahurst or the famous Lebkuchen (gingerbread) and search the stalls for gifts from all over the world, such as Czech wooden angels and French marmalade.

Meet the crowned, gilded-cloaked Christkind, passing on your wishes to them. Climb to the top of the Church of our Lady to see the red and white booths on the streets below. 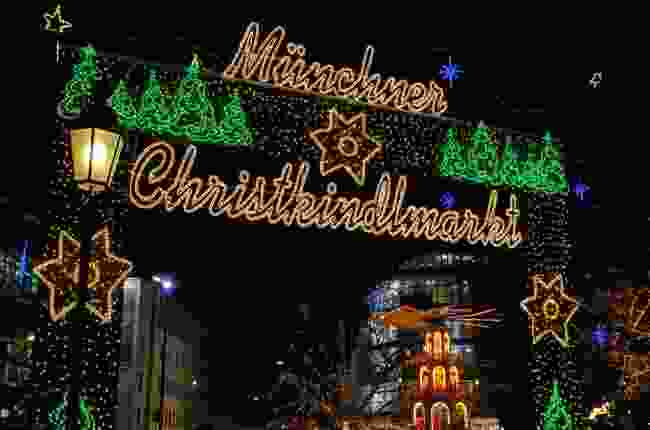 Munich’s main and extremely traditional market, the Münchner Christkindlmarkt, bursts out of the Marienplatz, winding all the way up the shopping street and reaching the Richard Strauss Fountain. Expect a Bavarian extravaganza with hand-painted glass balls and home-brewed Beerenglühwein.

Wander the stalls lit up by the massive Christmas tree in front of the town hall and the 2,500 candles creating a warm, merry glow. 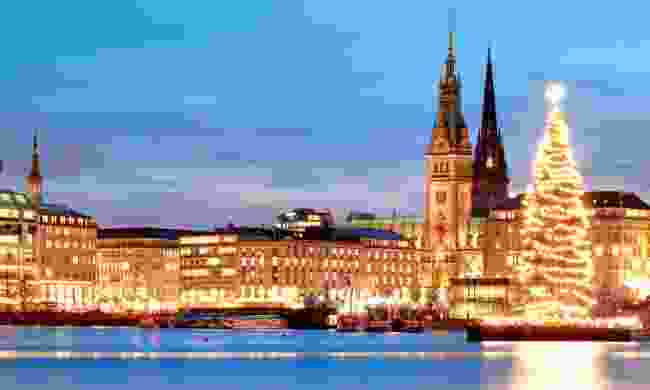 The historic Hamburger Weihnachtsmarkt is housed in Hamburg’s largest square, with around 80 vendors setting up stalls in front of the glittering town hall.

A stroll down these antiquated streets will soon make you forget all about your mobile phone and be entranced by the unusual gifts displayed instead. The Glühwein here is a must-try, made specifically for Hamburg's market by a small winemaker ­- you can’t taste it quite like this anywhere else.

Children can enjoy rides on a large model railway through the toy lanes and see Father Christmas on his reindeer-led sleigh announcing himself with a merry ‘ho, ho, ho!’

Hosted in the grounds of the pastel-yellow Schloss (castle), the Weihnachtsmarkt Schloss Guteneck plays host to the Middle Ages, with strings of lights wrapped round trees and roaring fires dotted around for warmth.

Minstrels, clowns and jugglers roam through the stalls and farm animals can be petted in their pens. Open only on the weekends, it offers something different each time, from falconry to fire-dancing and even camel rides! The evening's events revolve around the various Advent celebrations, along with live Nativity scenes.

A variety of music can be enjoyed throughout the festivities, including baroque flautists, brass bands and concerts in the barn. The aroma of mulled wine and flame roasted-almonds scents the air, while fried doughnuts and Langosch are the fair's more unique culinary choices.