Bless you: 4 Tibetan monasteries you must visit

Author John Dwyer travelled across China and Tibet in search of the most inspirational monasteries in the region. From quiet corners of reflection to rowdy places of debate, here are his top four 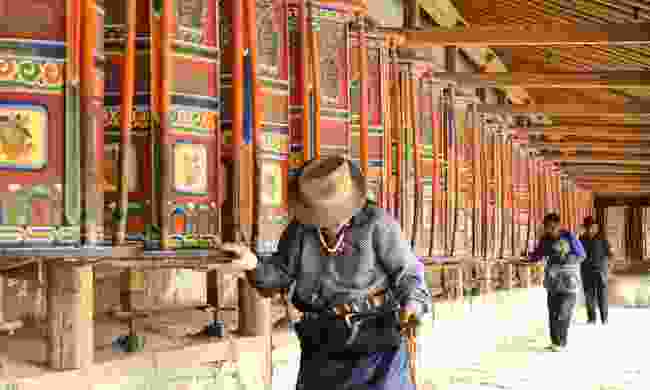 Labrang is situated in China’s Gansu province and is one of the largest Tibetan monasteries outside Tibet itself. It is also the seat of the Gelukpa sect, one of the four main schools of Tibetan Buddhism. They are better known as the Yellow Hat sect due to their bright-yellow headdresses.

On the day of my visit, two monks stood on the roof of the main building, each blowing a gilded horn about eight feet long. They were bedecked in maroon robes and their signature headdresses. The roar of the horns echoed across the valley. Inside the main courtyard, other monks rang bells and burned juniper. Fragrant smoke wafted across in the air as pilgrims prayed and prostrated themselves before the main building. These were sights and sounds from another age.

Soon after, I joined the pilgrims on the kora, the religious circuit of the monastery. Such is the stream of devotees, that few of the two thousand prayer wheels along the route remain stationary. The pilgrims fingered their prayer beads with one hand turning the prayer wheels with the other, all the while muttering the mantra, “Omni padme hum.”

Up ahead of me a woman was prostrating full length on the ground. She rose from the dust and clasped her hands to her forehead, lips, and chest before again going full length on her stomach. Only a leather apron and gloves protected her skin. She moved herself forward slowly, repeating a mantra before prostrating herself once more.

At the time of my visit, the most senior Lama was a four-year-old boy, believed to be the incarnation of the founder of the monastery.

Nothing beats local knowledge and people are happy to show you around if you express an interest. If they speak English, you also have the added bonus of a translator. I was lucky enough to befriend such a person named Frank, who offered to show me the secretive College of Astrology, one of the six institutes housed in Labrang.

Frank believed that the senior lamas at this college could do some remarkable things based on ancient Tibetan knowledge. When I pressed him on this, he told me stories of lamas being seen in different places at the same time, and of others levitating into the air. He said that he himself had seen one lama rise into the air while being turned into a brilliant light. 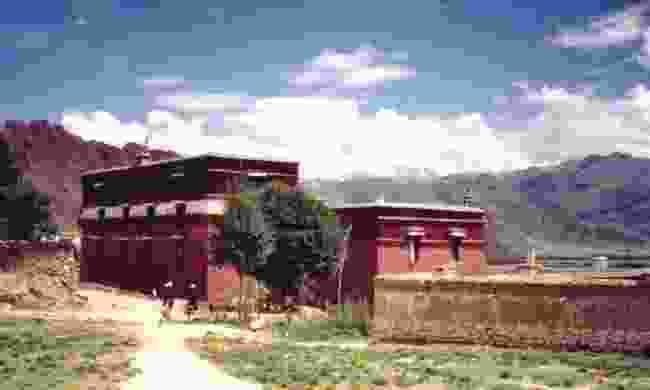 “Hollow, eerie music greeted us at the gate of the temple. Inside, the spectacle was ghastly. From every wall looked down hideous, grimacing faces and the air was filled with stifling fumes of incense.”

Nechung Monastery has changed little since Heinrich Harrer described it in his book Seven Years in Tibet. Situated a few miles outside Lhasa, it was the seat of the State Oracle during the reign of the Dali Lama. The Oracle was the medium through which the protector deity of Tibet spoke. The Tibetan government always consulted him before taking any important decisions. The last State Oracle fled Tibet to India with the current Dalai Lama in 1959.

Just inside the monastery entrance, bottles of Chinese rice wine are sold as offerings. This is unusual as in most Tibetan monasteries people buy butter to feed the lamps. The walls are decorated with paintings of people being disembowelled by devils and dogs devouring the innards of the dead. The borders of the every room are dotted with images of skulls, with snakes slithering out of the eye sockets. The rooms and chapels reek of alcohol.

I stumbled upon a small chapel where a monk chanted a mantra in a deep, guttural tone while banging on a drum and crashing a cymbal. Even the glass in the windows reverberated with the sound. It wasn't hard to imagine demonic possessions taking place there.

If you wander to the back of the monastery, you can watch workers carving mane stones, brightly decorated stones used in religious ceremonies. You might also be able to purchase some small pieces. 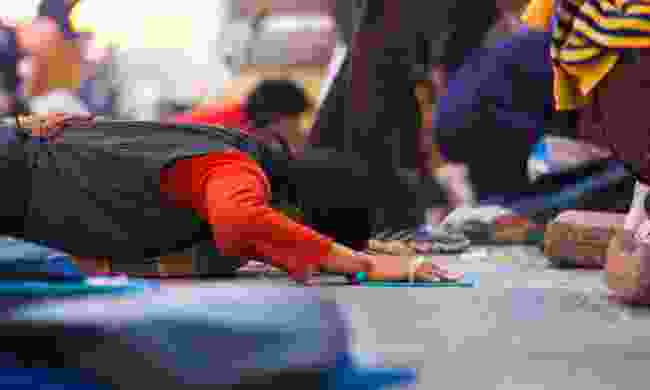 For Tibetans, The Jokhang Temple in Lhasa is the holiest of holies. Pilgrims come from all over the Tibet to pray here. There was a joyful atmosphere as I waited with the pilgrims for the doors to open. People smiled broadly and seemed happy and excited. Once the heavy doors finally swung open, they surged through them with shouts of joy.

The centrepiece of the temple is a golden statue of the Buddha at the age of twelve, the most revered sculpture in Tibet. People prostrated in rows in front of the statue, monks chanted in unison, and temple custodians shuffled around filling lamps with yak-butter. The flickering lights of hundreds of lamps cast a pale glimmer around the otherwise darkened hall.

Pilgrims chanted around the statue before throwing themselves full length on a plank of wood at its base. A huge monk stood behind the prostrating pilgrims and yanked them off the plank with one hand after a few seconds, thus keeping the line moving.

With a bit of searching, I found the stairs to the roof. There I was treated to a fantastic view of the city with the Potala as a backdrop. Below me in Barkhor Square, about 30 pilgrims prostrated in front of the Jokhang. Fragrant smoke rose from a white chimney nearby and was scattered across the square by a light breeze.

If you can, join the pre-dawn kora around the Jokhang before it opens and soak up the atmosphere before the tourists arrive. It’s also a good idea to purchase a white scarf as an offering before entering the temple. 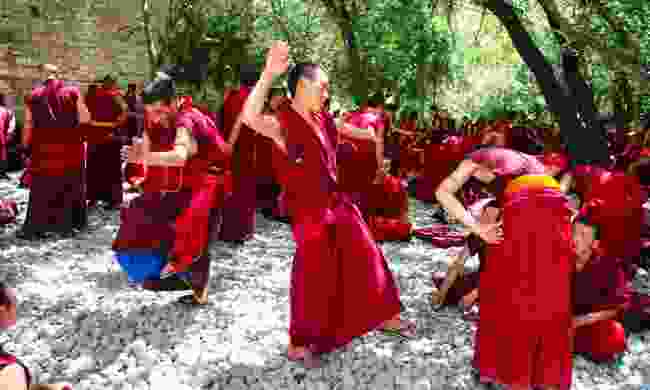 At Sera, monks gather every day to debate Buddhist scripture. I got there early and found myself a nice spot in the courtyard before they arrived. The monks filed in gradually and took up positions on the stony ground. Initially, they seemed to be very conscious of the tourists watching them. Once they started debating however, they completely forgot about us.

The whole exercise was intended to help the students gain a greater understanding of the scriptures they had learned. Some of the debaters seemed to be novices, while others were pure showmen with experience and swagger.

Young monks debated with each other while sitting cross-legged on the ground. Senior monks walked among them, correcting their arguments. Some of the young monks stood up and made their point with wild gesticulations before clapping their hands together to pass the right of reply back to their opponent.

If you do the kora around the monastery, you’ll see some beautiful rock paintings at the eastern end, depicting fearsome protector deities. Climb the steps above these rocks to find a lookout point with some incredible views of the Lhasa Valley. 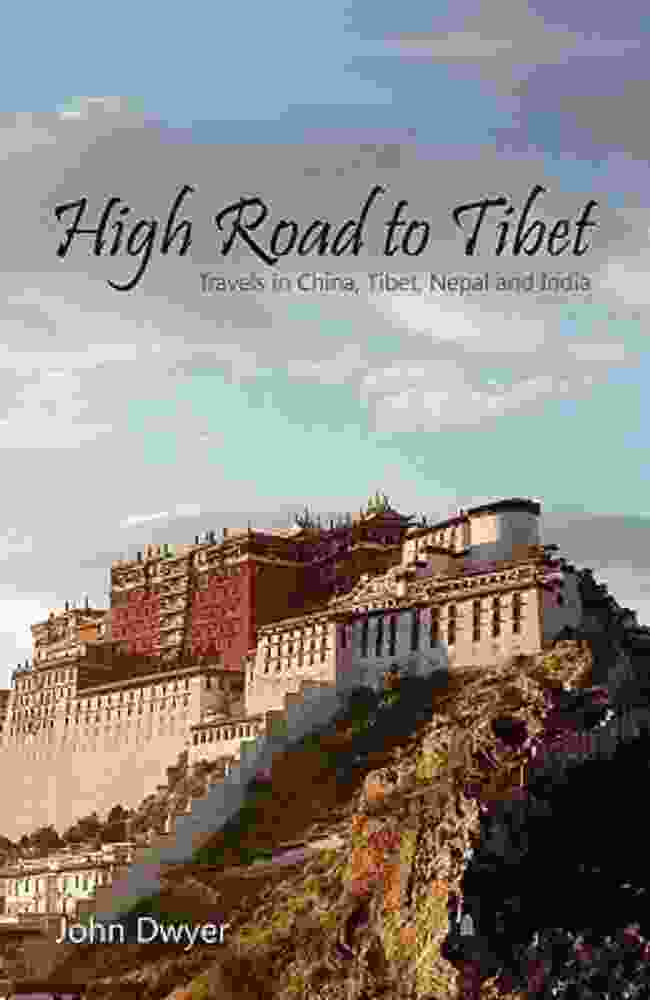 John Dwyer is author of High Road to Tibet: Travels in China, Tibet, Nepal and India. He has travelled extensively in Asia but is especially drawn to the Tibetan land and its people.