From roasted guinea pig to the world's most pungent potatoes, Peru's cuisine isn't for the faint hearted – but fortune favours the brave. Don't leave 'til you've tried these dishes, says Julia Hammond...

Peru is fast becoming known as a foodie destination, changing people’s perceptions after years of supplying mediocre food because few people could afford anything better. Now, with the economy booming, locals can afford to eat out on a regular basis and celebrity chefs like Gastón Acurio are revolutionising the way food is served. Lima and Arequipa lead the way with upscale restaurants that will satisfy even the pickiest of gastronomes; Cusco is snapping at their heels. And with a rapidly growing tourist sector, you too can eat well when visiting this South American gem. Here are the food and drink experiences you can’t afford to miss.

Ceviche (pronounced 'say-bee-chay') was originally conceived over 2,000 years ago by fishermen who mixed freshly-caught fish with tumbo fruit and finely-chopped chillies. It’s now so popular that there’s even a national Ceviche Day held on 28 June each year. 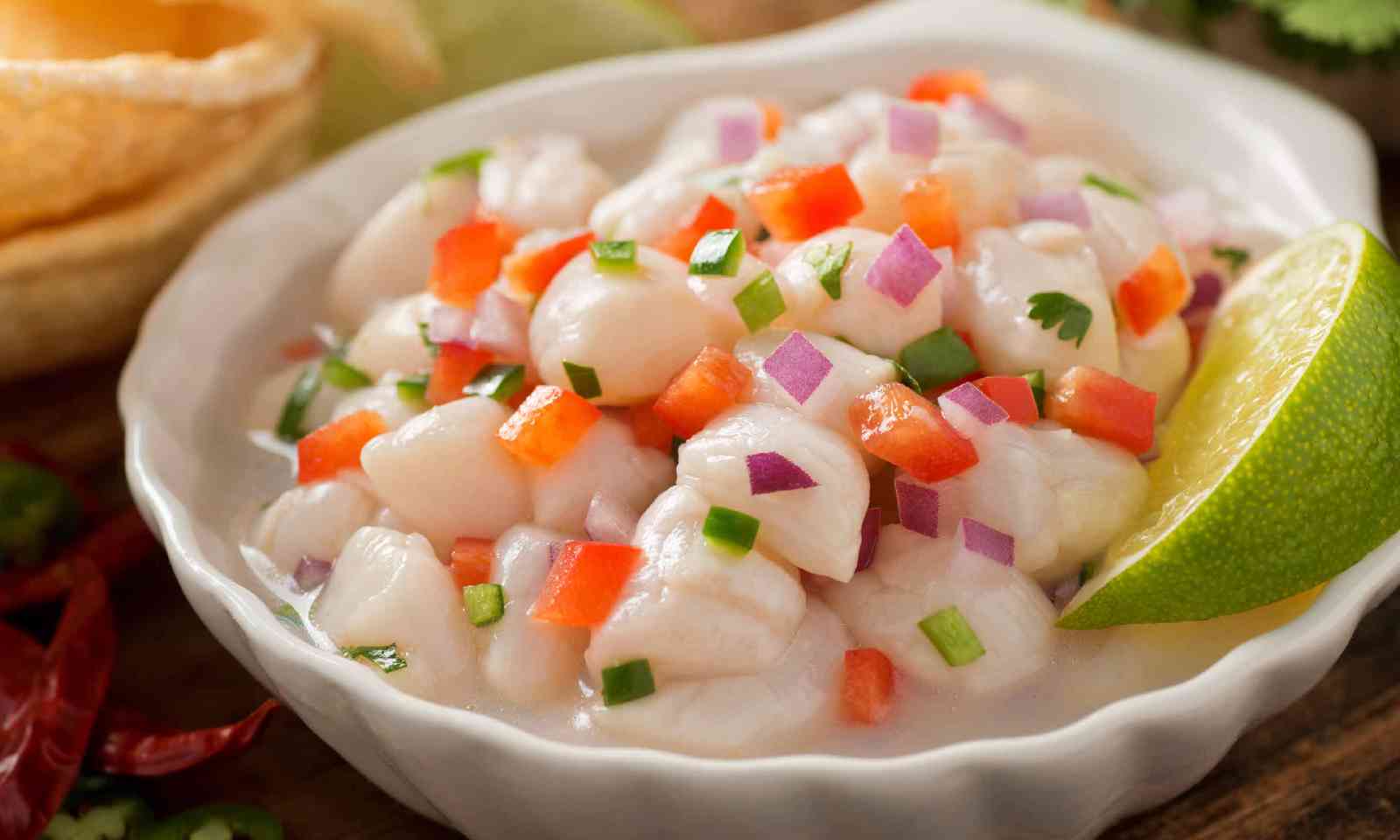 These days, tumbo juice is usually replaced with the more widely-available lime, which marinates the raw fish to perfection in around twenty minutes. You won’t find it anywhere after five, even if you travel the entire length of Peru’s 1500 mile Pacific coast - cevicherias close in the afternoon as the fish is considered past its best by dinner time.

Not for the faint hearted, cuy (pronounced 'kwee') is one of Peru’s more controversial taste experiences. Most easily found in highland towns like Cusco and the Urubamba valley, cuy is guinea pig. Get out of the main square and burrow deep into the back streets for a more authentic experience. 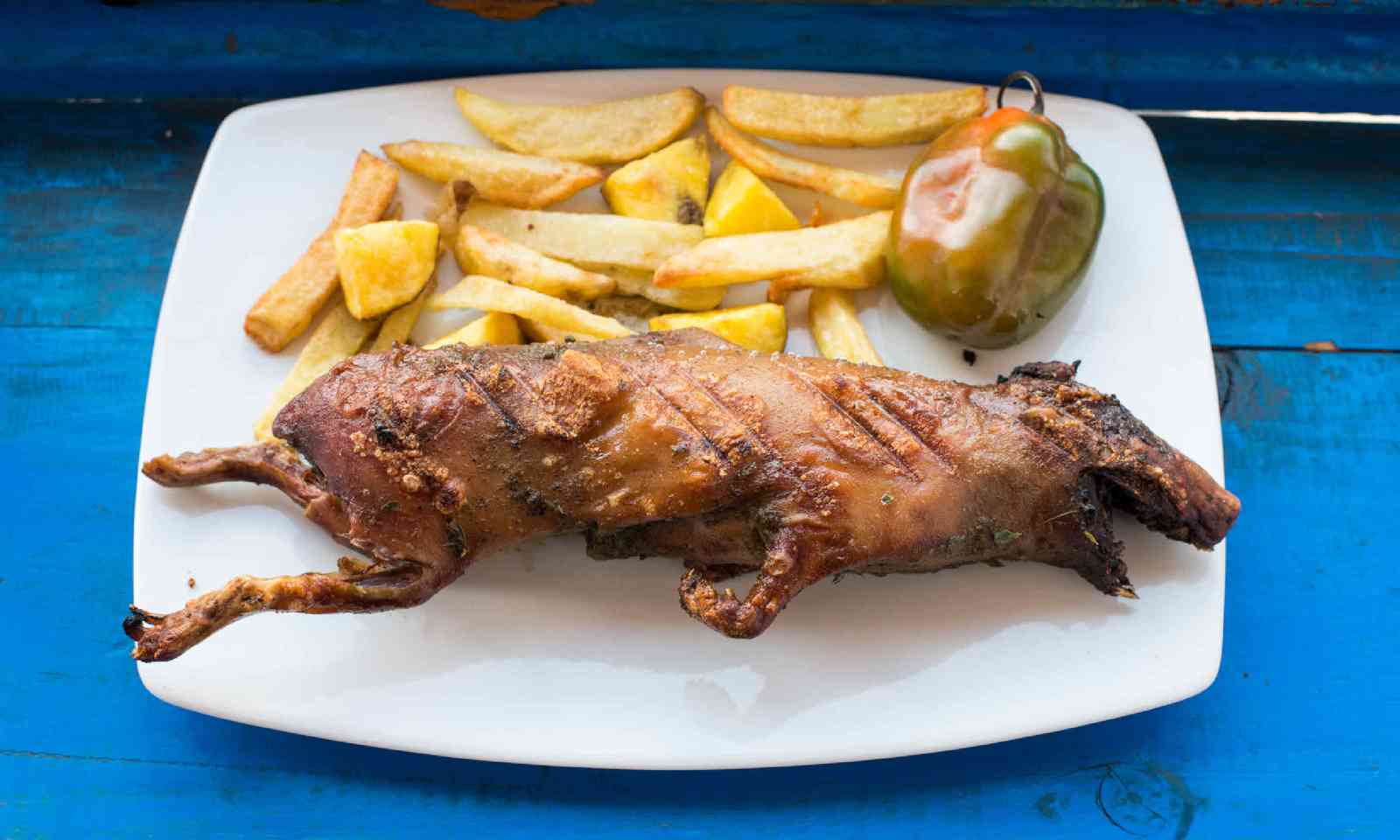 The creature is typically eaten roasted, its four tiny legs splayed like a spatchcock chicken across your plate. It’s a Marmite kind of dish; while some rave over it, the squeamish will struggle to get their head around eating something that they once cuddled and stroked as a kid. (Honestly, no one in Peru eats a pet; these guinea pigs are reared for the table.)

Obliging waiters will pander to your sensibilities by chopping off the head and four paws if you ask, though they’ll be having a laugh at your expense all the way back to the kitchen. If you really can’t bear to eat it, lie – tell your friends it tastes like a cross between crispy duck and roast chicken.

Try cuy on or off the bone at Cicciolina, Calle Triunfo 393, Cusco.

If meat’s your thing but you can’t stomach guinea pig, then head for Arequipa. Sitting in the shadow of El Misti volcano, the mountain’s sillar stone is ubiquitous in the old quarter. Nowhere makes better use of its surroundings than Zig Zag restaurant, housed in an ornately carved building dating from Spanish colonial times opposite San Francisco church.

Not only is the place constructed from sillar, it also heats stones originating from the slopes of the volcano to cook and serve a trilogy of locally reared meat: alpaca, lamb and beef. This sizzling platter is a popular draw so you’ll need to prop up the bar for a while if you don’t have a reservation. Don't worry about making a mess: the restaurant provides bibs.

When you’re asked in Peru how you want your potato, they’re not just asking whether you want it mashed, boiled or roasted. Potatoes have been cultivated in the Andes for 10,000 years and even today, there are 3,800 different types on offer. 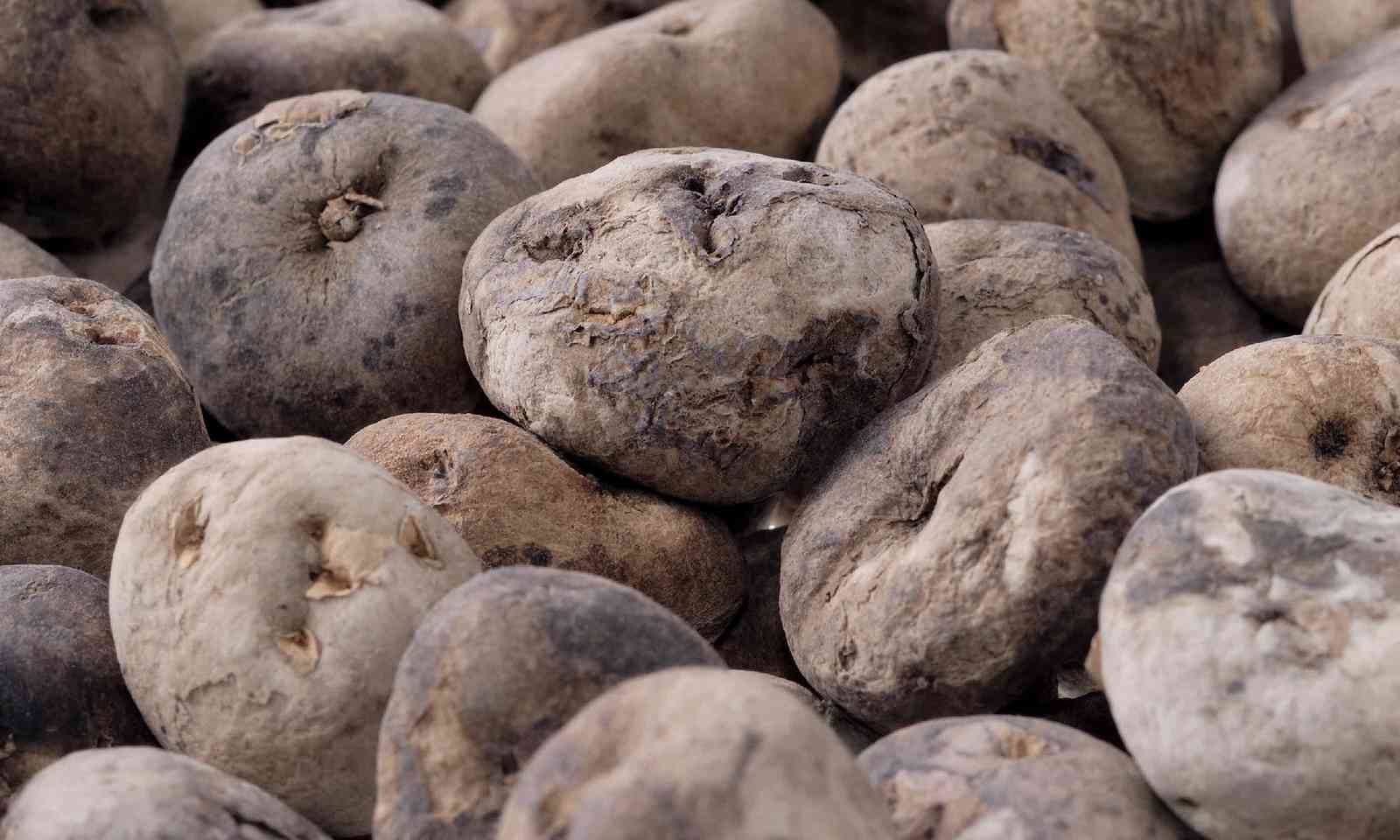 The strangest to foreign palates has to be chuño, small potatoes that are spread out on the gentle slopes of the Altiplano to dry in the high altitude sun by day and freeze as the temperatures plunge at night. The result is a bitter, blackened potato used as an ingredient in soups.

It’s a favourite practical joke to swamp these revolting tubers with so much soup that they are completely submerged, leaving unsuspecting visitors to pop them into their mouths thinking they are regular potatoes. If you’re truly blessed, a wrinkly-skinned chicken foot will be down there as well. You should try them at least once if only to appreciate how lucky we are that they’re rarely exported.

Peruvians have a sweet tooth and always leave room for dessert. Lúcuma, a little-known fruit native to the Peruvian Andes, has been grown in the country for centuries and was often represented by Moche artists in their work. 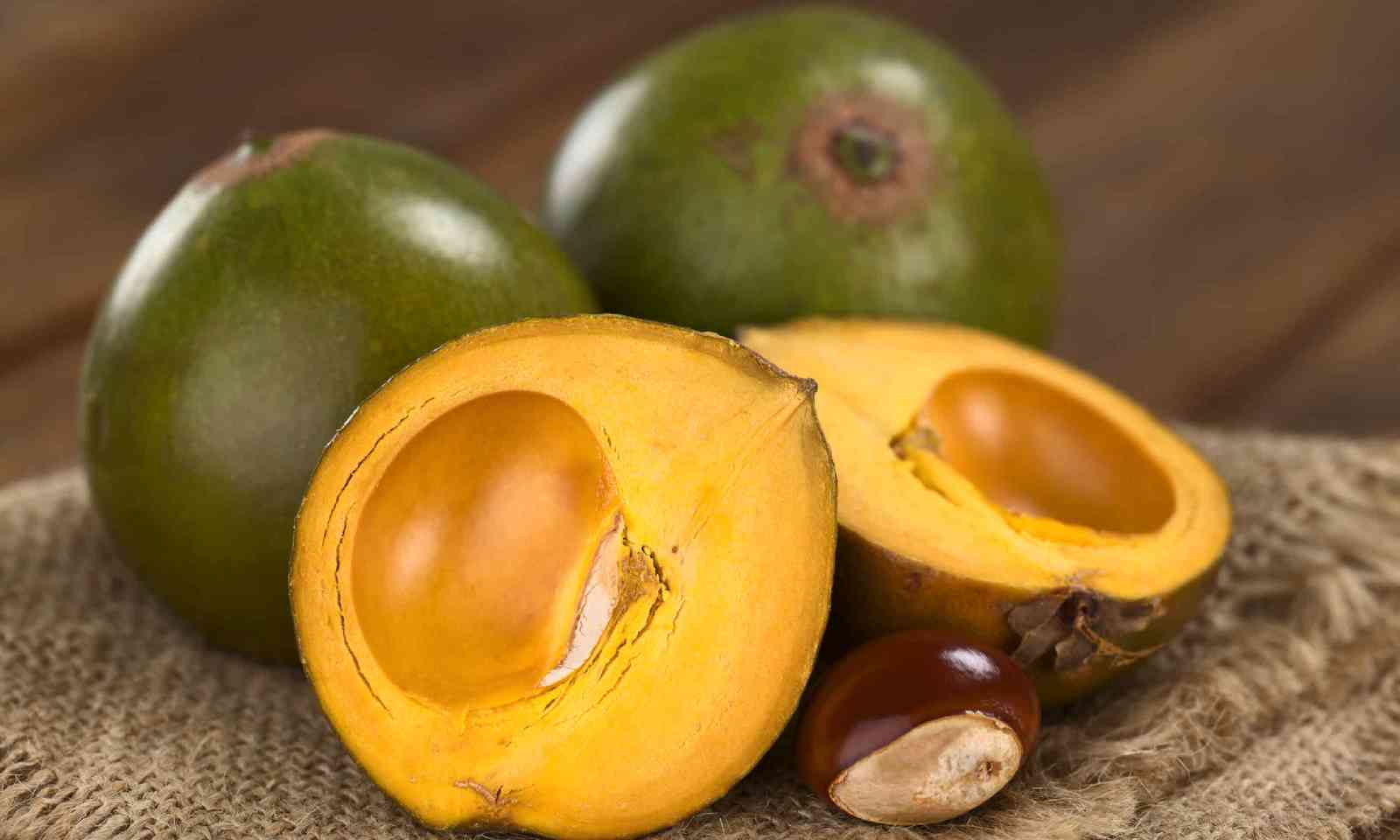 Popular as an ice cream flavour, as a fruit it has the texture of a hard-boiled egg, claggy on the tongue. So try it buzzed up in a blender with some milk and let the smooth butterscotch liquid slide down. That’s just the way they serve it at my favourite Lima café, La Bodega Verde in the arty Barranco district. Sit in their courtyard garden and escape the crazy traffic for a while.

Powdered lúcuma is available in the UK (from Holland and Barrett, Ocado), though it’s no substitute for the real thing.

Be careful when ordering a coke in Peru; you will need to specify that you mean Pepsi or Coca Cola. If not, you will be served Inca Kola, a sickly-sweet yellow soda created by a British immigrant named Jose Robinson Lindsey back in 1935. Its key ingredient, other than sugar, is the lemon verbena which gives it a unique flavour.

Launched to celebrate Lima’s 400th anniversary, its initial advertising slogan ran "There is only one Inca Kola and it's like no other." That’s true. We should be thankful for that. It’s the reason I spent a flight over the Nazca Lines with my head in a sick bag, but don’t let that stop you trying it for yourself.

Whether you drink Cristal or Pilsen Callao in Lima, Cusqueña in Cusco or Arequipeña in Arequipa, one thing’s for certain – cerveza is big business in Peru. Drinking beer is a social activity; typically a group of friends will buy a single bottle of beer and pass a single glass around from person to person, downing and refilling the glass until the bottle’s empty. It’s common to hear a mantra repeated each time the glass moves around the circle: "Arriba, abajo, al centro, a dentro!" Roughly translated, it means to raise and lower the glass, hold it into the centre of the group and then down it in one.

By the end of the bottle, let alone the evening, no one has a clue how much they’ve drunk but everyone’s spirits are high. This isn’t the place to drink alone so gather a group of friends and see if you can choose your favourite. I recommend Cusqueña Negra, Peru’s answer to Guinness.

Just a few blocks from the Arequipa’s cathedral, in San Camilo market you’ll find tough-as-boots women butchering alpaca into thick steaks and smell the pungent aroma of artisan cheese. But the jewel of this local market is tucked away in the furthest corner from the entrance: the cuajada stalls.

While you perch on a decades-old wooden stool alongside market traders on their break, the lovely ladies will serve your cuajada (milk curds) in a glass, lukewarm and topped up with algarrobina (black carob syrup). It slides down and soothes the throat – perfect for the morning after a raucous night on the town.

No list would be complete without the inclusion of pisco, Peru’s potent national drink and the source of conflict with its neighbour and rival, Chile. Pisco, the Peruvians insist, is a far superior beverage to the rough aguardiente or firewater passed off south of the border as the same thing. The Chileans counter that their drink is entitled to the name pisco and is just as good, if not better. It’s the South American equivalent of the champagne/cava debate. 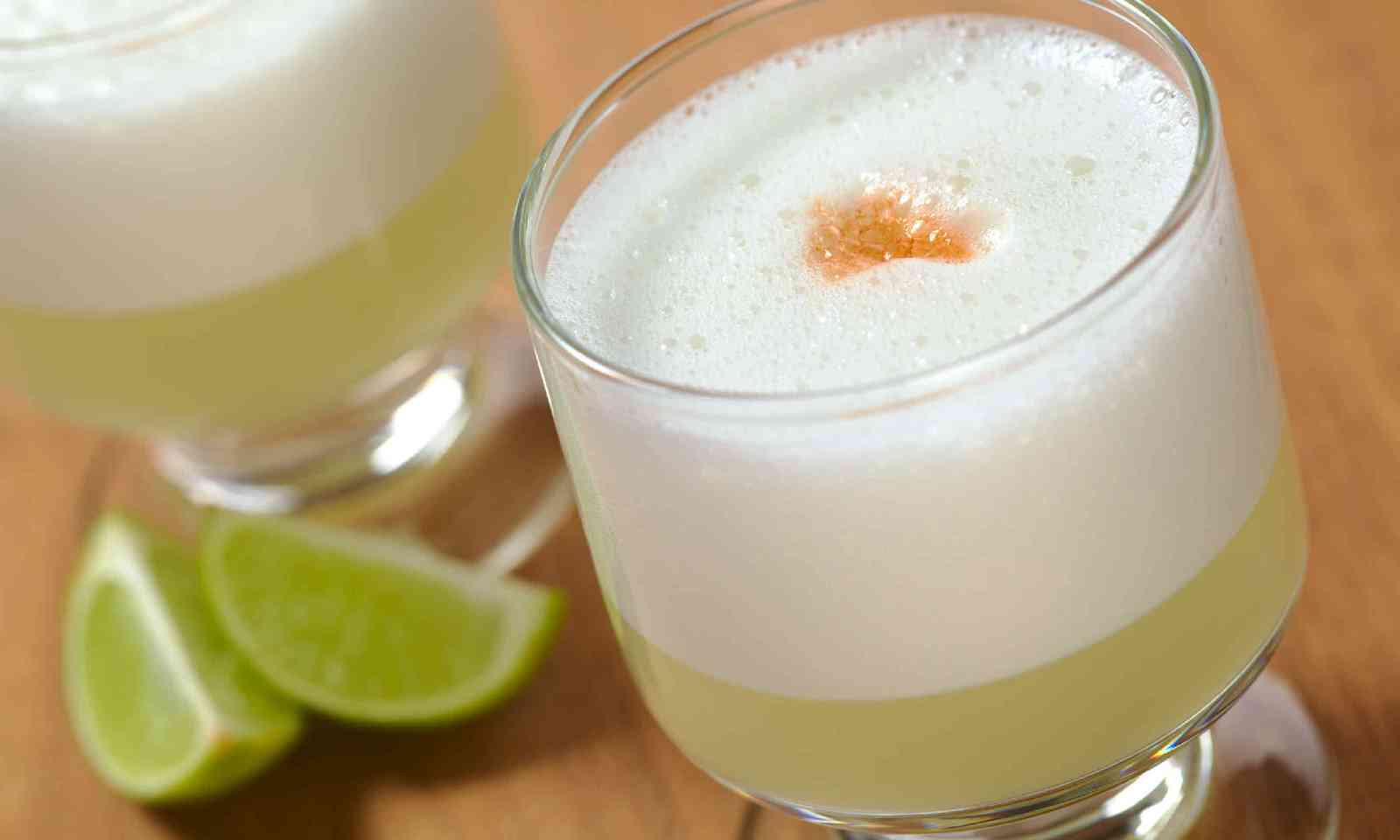 One thing is certain, both drinks are extremely strong grape brandies and, drunk neat, both will attack your throat and render you temporarily speechless. Drink it as the locals do: shake egg whites, sugar syrup and a dash of angostura bitters with a measure or two of the demon drink to create a pisco sour.

A word of caution: altitude magnifies the effects of this utterly irresistible but lethal cocktail. It’s the reason why I ended up lying in the middle of an Atacama Desert road staring up at the starriest sky I’ve ever seen. I swear I’d only had two. Instead, follow in the footsteps of Richard Nixon, Ernest Hemingway and John Wayne and sip it slowly in the genteel surroundings of the Country Club Hotel in Lima where you remain safely at sea level.

As USPs go, the restaurant at Huaca Pucllana in the heart of Lima’s upscale Miraflores district takes the biscuit – you dine so close to the 1,500 year old ruined pyramid you may as well be eating off it. The huaca, once a temple, has been carefully excavated and restored by the owners of the restaurant, a condition of them being able to build so close to an ancient monument.

Novo Andino cuisine is inventive, its presentation so perfect you’ll be reluctant to dig in. But dig in you must. Try the roasted goat with creamy Lima bean mash or the medallion of alpaca served with a delicate corn soufflé. In between courses, diners are entitled to a free guided tour of the ruins. Go in the evening when the pyramid is creatively lit, but choose a summer night to avoid the drizzle that Lima endures for much of the southern hemisphere winter.