11 things you must do in South Korea

Often overlooked, South Korea offers a beguiling mix of ancient culture, futuristic cities, extraordinary nature, and one of the most exciting foodie scenes on the planet...

1. Chow down in Gwangjang Market 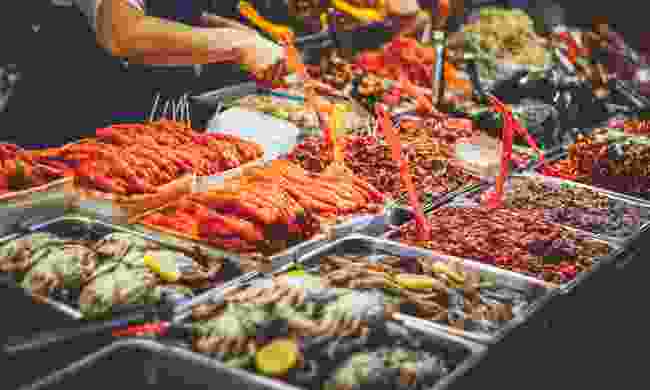 South Korean food is famous around the world and there is no better place to sample it than at the source: Gwangjang, Seoul’s busiest meokja golmok (food alley). Once the city’s fabric market, it has been colonised by over 200 food stalls, pop up restaurants and makeshift bars.

It's the chaotic food stalls that you’ll love. Choose one that takes your fancy, pull up a plastic stool and join construction workers, salary men and tourists in eating the best mandu (Korean dumplings), jokbal (braised pig's trotters), bibimbap and boribap (mixed rice and barley topped with a selection of veggies) on the planet.

2. Immerse yourself in ancient Korea in Jeonju Hanok Village 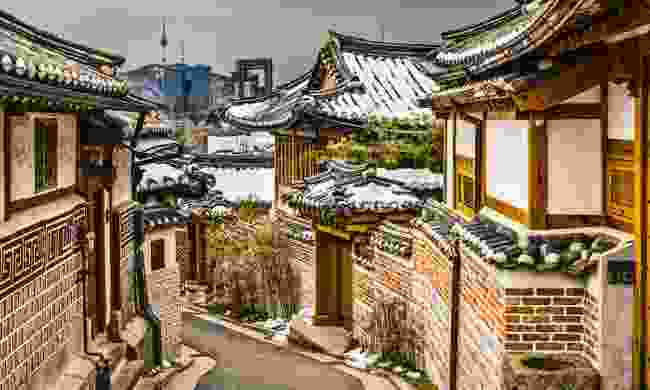 Step back in time in this picturesque maeul (village) featuring more than 800 hanok (traditional wooden homes).

Sitting in the shadow of the modern city of Jeonju, in the western part of the country, the village is a jumble of cobbled lanes, curved tiled roofs and tiny bars and restaurants selling traditional favourites like bibimbap, the best known dish from the Jeonju region.

To avoid the crowds, stay overnight in one of the beautifully restored guest houses or take a workshop on making traditional paper or the local moonshine. As the sun sets, the smoke from kitchens and fireplaces drift into the air. It is a truly enchanting sight.

3. Be dazzled by the Jinju Lantern Festival 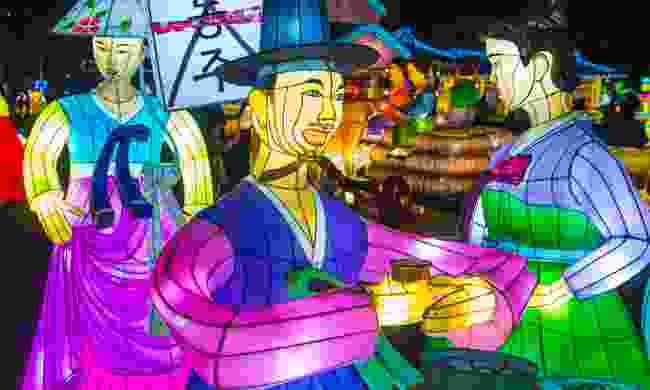 Starting out as a small ceremony to honour the 70,000 men and women who lost their lives fighting the Japanese during the Imjin War, the Jinju lantern festival has gone on to become one of most colourful and lively in the world.

Every October, thousands of people flock to this southern town to watch a procession of gigantic, technicolour lanterns float by on the Namhan River. It’s bright, colourful and with plenty of stalls selling all kinds of local food and drink along the river bank, it’s quite the party, too. 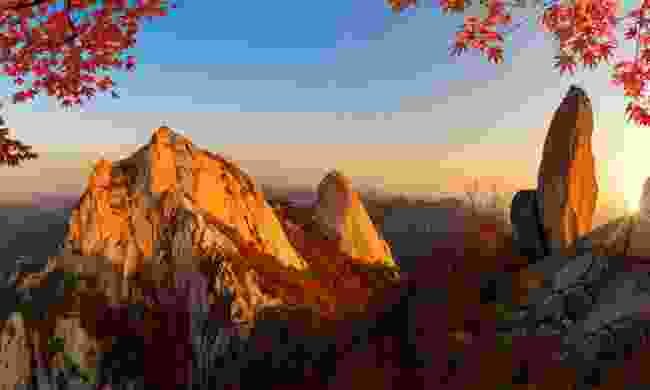 When you’re in the middle of Bukhansan National Park, gazing upon its imposing granite peaks, surrounded by forests of maple trees, it’s hard to believe that the centre of Seoul is only 45 minutes away by subway.

Idyllic hikes to some of the highest peaks in the country draw over 5 million hikers and rock climbers annually, but as you wander past rushing streams and remote temples, you certainly wouldn't think it.

One of the most popular hikes is the trek up Dobongsan (740m), with a detour to the forest temples of Cheonchuksa along the way. In the southern part of the park, you’ll find South Korea's highest peak, Baegundae, a three and a half hour return trip via the Bukhansanseong trail.

5. Get down and dirty at the Boryeong Mud Festival 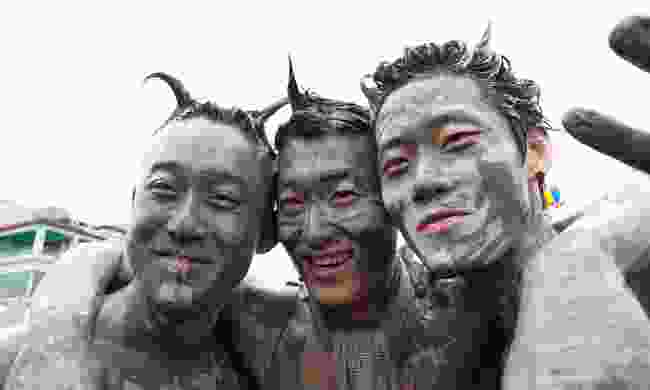 Rivalling La Tomatina in Spain as the one of the world’s messiest festivals, the Boryeong Mud Festival started as a way of promoting the health benefits of the local mud. Now, over 20 years later, it attracts more than one million people keen to get down and dirty in an unabashed, alcohol-assisted mud wrestle.

Most of the action is centred on Daecheon Beach. Here, participants are ‘baptised’ with a bucket of grey mud, before taking on a mud super-slide, a mud rain tunnel and a number of muddy pools.

After taking a dip in the ocean to wash off the mud, you can take your pick from the host of concerts, parades and fireworks put on by the organisers every July.

6. Visit the DMZ at Panmunjom 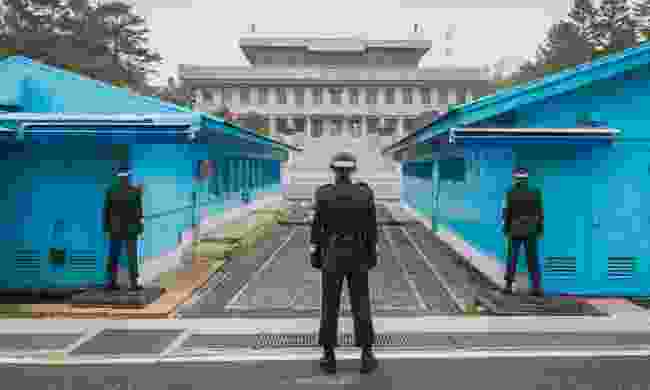 A truce was called in the bloody Korean War in 1953, but the war has never officially ended. Instead, a demilitarised zone, the DMZ, was set up, stretching 248km from coast to coast. Negotiations are ongoing, and a visit to the DMZ at Panmunjom, only 62km from Seoul, is a popular day trip.

The highlight is the Joint Security Area (JSA), where soldiers on both sides of the barbed wire glare at each other. You’ll also visit the sky blue conference huts, where both sides meet periodically.

Your tour will also take in the Mount Odu Observatory, also known as Unification Hill, where binoculars provide for a 360-degree panoramic view of the Korean Peninsula, the Peace Palace, and secret North Korean tunnels, discovered by South Korea. You must apply to do the tour three days in advance, so the necessary paperwork can be arranged. 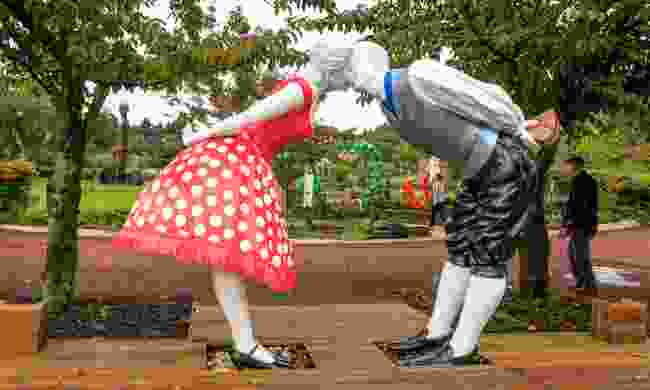 Statue of couple kissing at Loveland on Jeju (Shutterstock)

Located off the southwestern coastline of the Korean Peninsula, the beautiful volcanic island of Jeju-si has long been popular with Korean honeymooners. You’ll spot them lining up to have their photo taken at beauty spots, often using the leaves of the island’s palms to form the shape of a love heart around them.

For the rest of us, the UNESCO-listed island boasts a geo-park, a bioreserve, plenty of hikes and towering statues of ancient deities, carved from the local volcanic rock. The island is also famous for the haenyeo, traditional women divers who dive to depths of 10m to 20m without equipment in search of clams, abalone and octopus. 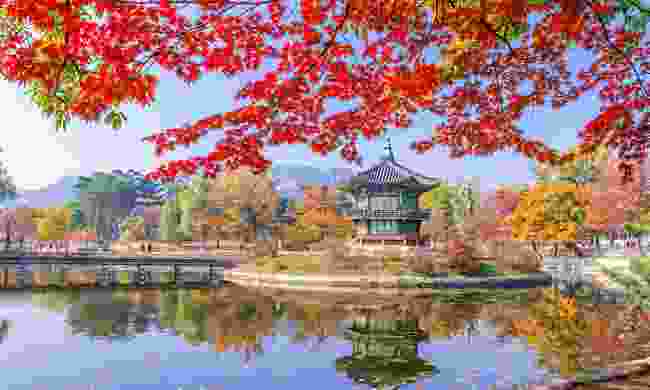 With five ancient imperial sites spread across the city, Seoul is a city of palaces. Juxtaposed against the city’s futuristic skyline, these ancient places are a reminder of the country’s colourful past and are places of respite in this most bustling of cities.

The grandest is Gyeongbokgung, built during the Joseon Dynasty and set on 40 hectares of beautifully manicured parkland.  Known as the 'Palace Greatly Blessed By Heaven', it comprises of 14 restored buildings, including the king’s main living quarters. Don’t miss the spectacular changing of the guards, held every day, every hour on the hour, between 10am and 3pm.

Of the other palaces – Changdeokgung, Changgyeonggung, Deoksugung, and Gyeonghuigung – Changdeokgung is the most spectacular. Make sure you visit the Secret Garden, which boasts 56,000 specimens of trees. A truly stunning sight in autumn.

9. Make like Moses at the Jindo Moses Miracle Festival

Every year, sometime in March or April, an series of extreme low tides reveal a temporary land bridge between the southern Korean islands of Jindo and Modo.

Thousands of locals and foreign tourists descended on the area to walk across the ‘parted sea’, and the Jindo Moses Miracle Festival was born.

As the popularity of the walk grew, so did the festival.  Now the event hosts some of the country’s biggest K-Pop bands, and countless food and drink stalls await pilgrims on both sides of the sea path.

10. Step into the future in modern Seoul 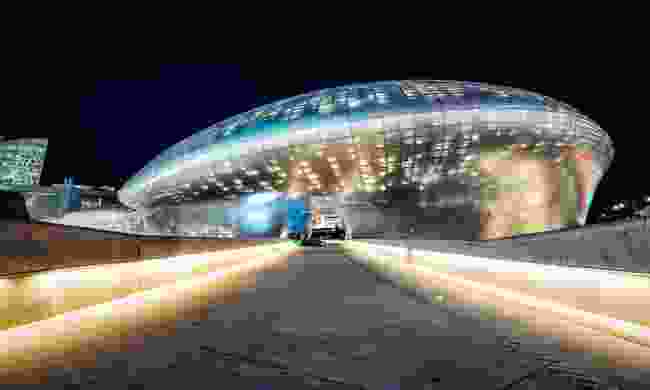 South Korea is home to some of the most innovative and hi-tech companies in the world. Sometimes, walking the streets of Seoul feels like you’re on the set of a futuristic sci-fi movie. Indeed, many companies, like Samsung and DJI, have set up ‘museums’ showcasing the tech of the future, right now.

Samsung D’light, in Gangnam, offers a hands-on experience showing how Samsung products will change the future. DJI, the drone company, has an arena in Yongin, where you can fly their latest drones through a series of hi-tech obstacles.

There’s a Robot Museum in Jongno-gu that explores the history and future of robotics. And VR Plus, a virtual reality cafe in Gangnam, showcases the latest and greatest in VR. At K-Live, a concert hall in Dongdaemun, you can attend a holographic concert by your favourite K-Pop stars.

The city’s ultra-modern Incheon International Airport has embraced the future too, with a cafe called Beat, where robots make your coffee. 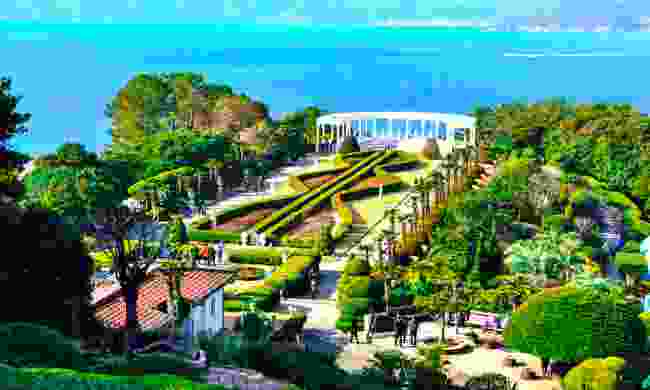 Oedo was transformed into one of South Korea’s most exotic botanical gardens by the Lees, a husband and wife team, who moved to the island in the 70s.

Their initial plan to grown tangerines and breed pigs was unviable, so instead they started planting rare and exotic plants from around the world. The mild, subtropical weather proved ideal and now the island garden is home to over 3,000 plant species.

Oedo is a short ferry ride from the southern port city of Busan, and best visited in spring and autumn.

A beginners’s guide to street food in Seoul

How to make Korean baechu kimchi