12 of the best things to do in Slovenia

A Balkan country known for its colourful squares, impressive peaks and ethereal, dreamlike lakes – but also its green tourism efforts. So, what's there to see, do and explore in sustainable Slovenia?

Slovenia's natural prowess means it has a lot to offer travellers. Like to hike? There's a peak for that. Love a view? Simply head to one the country's many dramatic, sprawling lakes. Enjoy a jaunt around town? The capital, Ljubljana, is the perfect blend of Old Town charm and modern markets ideal for a short city break.

Don't forget that Slovenia has been hailed a sustainability-conscious traveller's dream, most recently by National Geographic in the US. Their own green tourism initiative, the Slovenian Green Label, provides a handy rating of each and every destination and activity in the country. Fortunately, lots of the places on our to-do list were given a shiny 'gold'.

Here are just some of the best things to do in Slovenia... 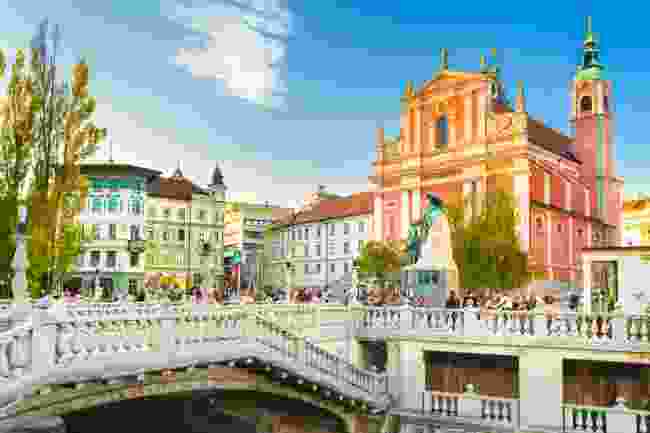 Right in the heart of Ljubljana's city centre is Prešeren Square: an excellent place to start your stroll. First, head into the iconic pink Franciscan Church of the Annunciation. Zig-zag across the 'Triple Bridge' (Tromostovje) and admire the River Ljubljanica below.

Cross the Dragon Bridge and grab a cheap eat at the daily Central Market, or show up for Friday's Open Kitchen market. Enjoy green space in Tivoli Park, and take a wander around one of the historic museums on site.

Head out to the fringes of the city to find Metelkova, a small, autonomous arts zone. Expect building-upon-building (many formerly military) decorated in vibrant colours, the odd shop and market stall, an independent cinema, live music venues, and a hostel or two in the vicinity.

Despite the odd hanging skull and black paint adding to the intense vibe, you'll find the Metelkova's residents and visitors to be quite friendly.

More amazing things to do in Ljubljana

2. Go beyond the famous Lake Bled 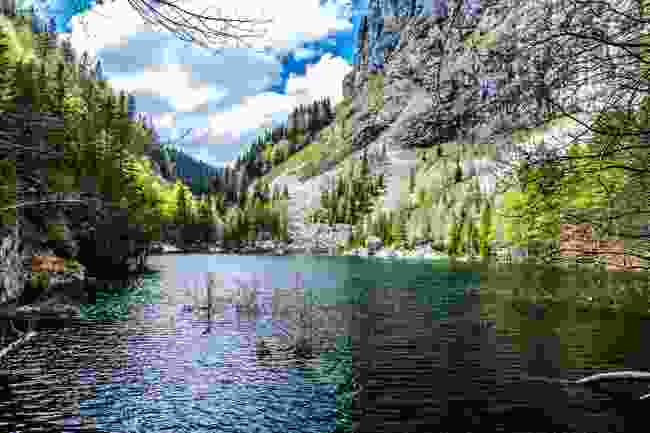 The Black Lake, one of the lowest in the region, in Slovenia (Shutterstock)

Lake Bled is a must-visit, renowned the world over for its incredible beauty. But Slovenia houses many other, equally impressive lakes –  spread all over. They're all well worth a visit.

The Black Lake in Triglav Lakes Valley, for example, is the lowest-lying of several lakes in the valley. Its dark deep waters seem to stretch on for days. Lake Jasna, near the ski resort town of Kranjska Gora, is postcard perfection in the summer, framed by rich, green mountainside.

Lake Bohinj comprises of 318 hectacres in the Julian Alps. It typically boasts pristine blue-green waters, but looks equally pretty and even more mystical under cloudy conditions.

3. Don't skip the wonders of Bled altogether, though 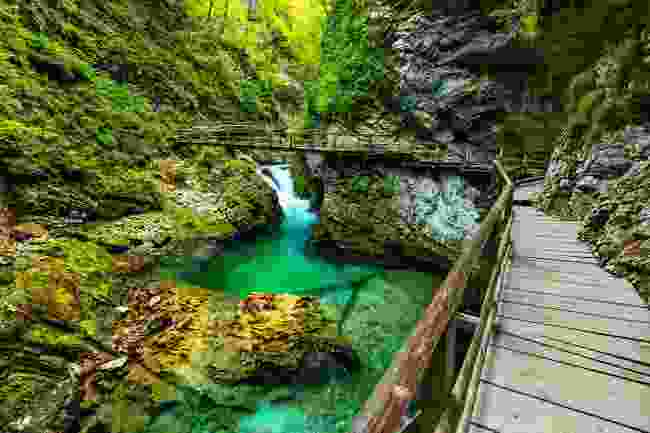 While its unlikely you'll ever board an empty bus to Bled, there's a good reason why the lake and its surrounds are so popular with visitors.

Firstly, Lake Bled itself is just as beautiful as its counterparts. It'll be busiest in summer, of course. It'll be sparkling, though, with plenty of water-based activities on offer, and is perhaps the best time to get the boat over to the petite-but-worth-a-look Bled Island.

As the weather gets wetter and colder, the walk around Lake Bled remains just as good – with the added bonus of visitor-free paths. The medieval Bled Castle looks atmospheric and almost eerie in grey, cloudy weather – after all, it's thought to be the oldest castle currently standing in Slovenia.

A few miles from Bled town is the magical Vintgar Gorge, bursting through Hom and Boršt hills in a rainbow of green shades. A morning visit is advised, so not to do battle with fellow travellers on the 1.6km of wooden walkways. 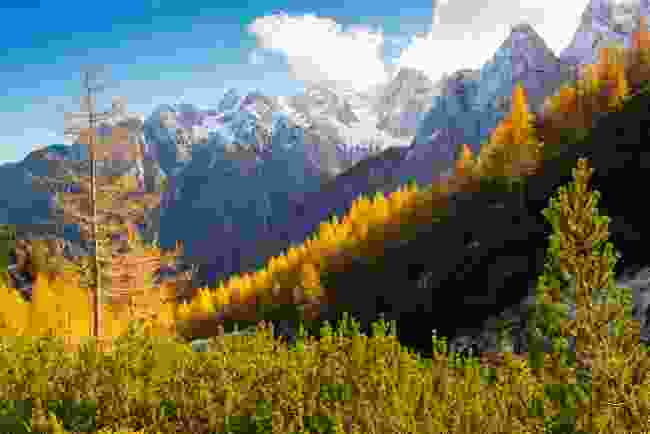 Expect to see myriad colours on your trek through Triglav National Park: yellow, green, orange, brown, blue skies, white clouds and a mix of greys making up the many high peaks available to hike.

Serious hikers will be keen to climb the mountain after which the park is named: Mount Triglav. It is 2,863m tall, making it the highest in all of Slovenia and in the Julian Alps. July to October is the best time to summit, and you'll be looking at two to three days of all-day climbing to reach the top.

Easier and moderate hikes are on offer for those who love to walk and take in the views, but who aren't visiting Slovenia purely for the climb: the Triglavska Bistrica Trail provides simple terrain, great views and leads to the Slovenian Alpine Museum, the Soča Trail offers plenty of nature experiences, while the 2km-long Mostnica Gorge is another must-see.

5. Enjoy the Adriatic coast in Piran 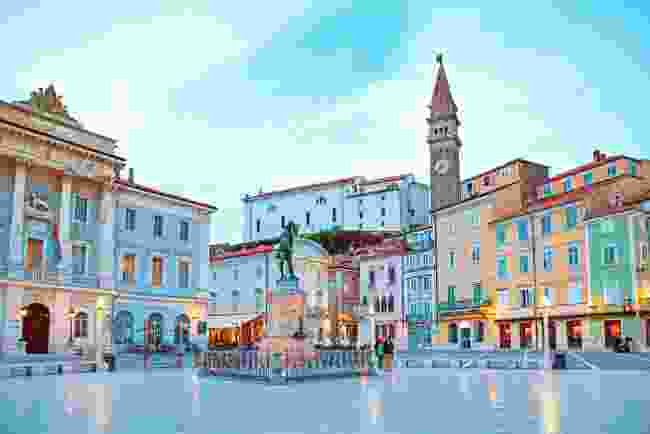 Tartini Square in the centre of Piran, Slovenia (Shutterstock)

Parts of Piran in south-west Slovenia are just as pretty as they look in pictures. Tartini Square, named after the 1800s violinist Guiseppe Tartini (whose statue resides in the square to this day), is a mix of pastel-coloured oranges, pinks and greens with signature terracotta roofs.

There's more to do that take pics: walk along the (rather long) pier, enjoy views of or a dip in the glittering Adriatic Sea, and get a feel for Slovenian Istria by sampling the local delights at a coast-side cafe. 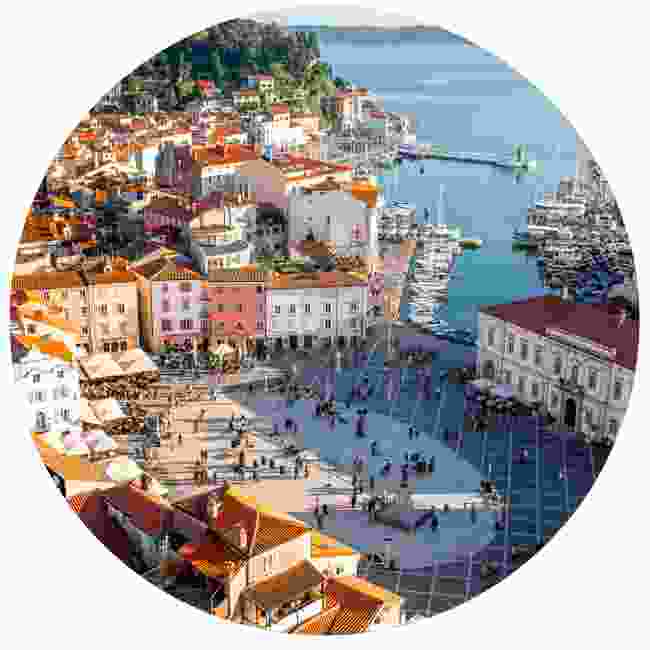 Piran's Tartini Square is right on the Adriatic coast (Shutterstock) 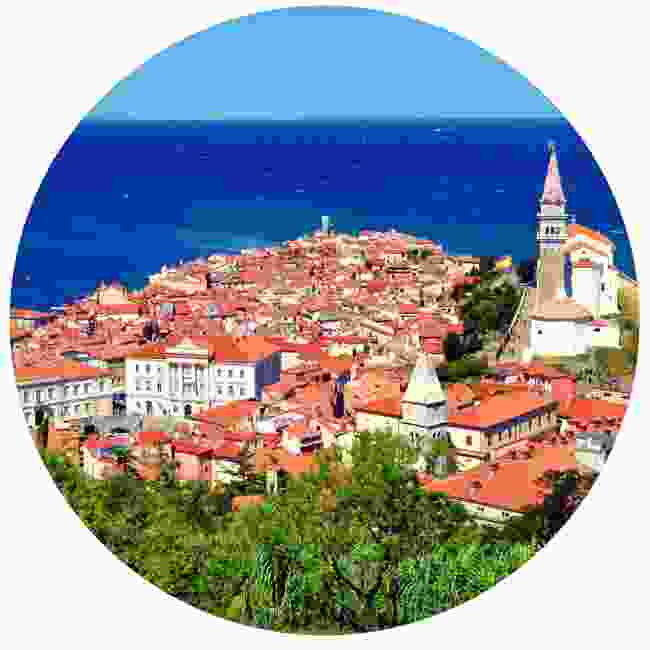 There's more to do than dreamily stroll around this Istrian gem. One historical wonder worth visiting are the Walls of Piran, a feat of 7th century to early 16th century architecture surrounding the city.

The city walls are well-preserved, with narrow stairways allowing you to explore. The views of the city below are, as you'd expect, quite something, too.

6. Watch wildlife in the Dinaric Alps 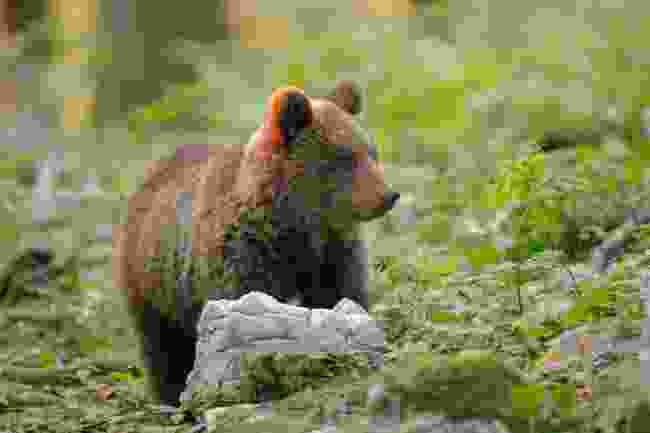 In the peak summer months (May to August), it's possible to see brown bears roaming the grassy wilderness of the Dinaric Alps. There are approximately 400 living in the region, and a number of tours are available to help you spot and photograph these great creatures in their home. It goes without saying you'll need a guide to get the most out of the experience.

The Dinaric Alps also offer prime birdwatching opportunities, with over 276 species seen in the area. Over 100 butterflies can be seen, too. Another of Slovenia's great lakes, Lake Cerknica, pools into existence for eight months each year. This protected wetland is incredibly biodiverse, and with it comes plenty more potential wildlife sightings. 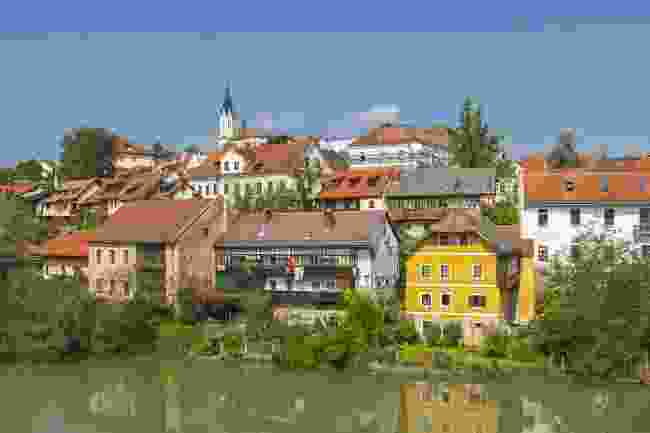 In the heart of the Dolenjska region is the town of Novo Mesto. Awarded the Slovenian Green Destination label of silver, it's little wonder, as everything here seems brilliantly bright green and natural.

Get your camera ready, for photographing the colourful homes (pictured above) on the bank of the swirling, turquoise River Krka. In the Old Town, you'll find everything you'd expect: a 16th century town square, a Franciscan monastery, the Cathedral of Saint Nicholas, and the fascinating Bishop's Palace.

There's also one of the largest prehistoric graveyards in Europe. Follow the Amber Road trail for a thorough walking tour through Novo Mesto's highlights.

You can also take a hike through the nearby historic Gorjanci Hills. The highest peak, Trdinov Vrh, is 1,178m tall, but there's miles of surrounding forest to explore, too. 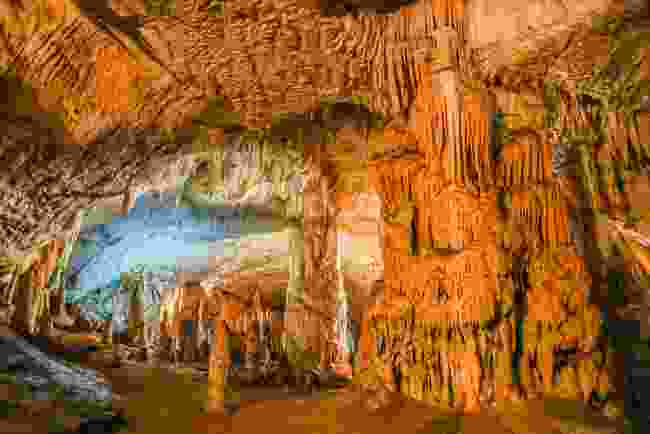 The weird and wonderful insides of Postojna Cave, Slovenia (Shutterstock)

For all the lakes we've mentioned, we'll now turn our attention to caves. Slovenia is the perfect place to try your hand at cave exploration, with the UNESCO-listed Skocjan Caves being one of the top locations.

It dubs itself a 'true open-air museum', with surface-level walking trails and the underground cave system, hidden beneath a Karst. There are tours to explain its natural significance year round, and this experience can easily be done on a day trip from Ljubljana. It's approximately one hour and 10 minutes away by car.

Another of the most famous caves to explore is in the south-west. Postojna Cave is another Karst cave system – made of limestone and 24,340m long, making it the second longest in the country.

Inside, it is truly spectacular. Once you've explored Postojna's natural majesty, head above-ground and travel 9km away to Predjama Castle, the largest castle to be built inside a cave mouth in the world.

9 of the world's most awesome cave systems 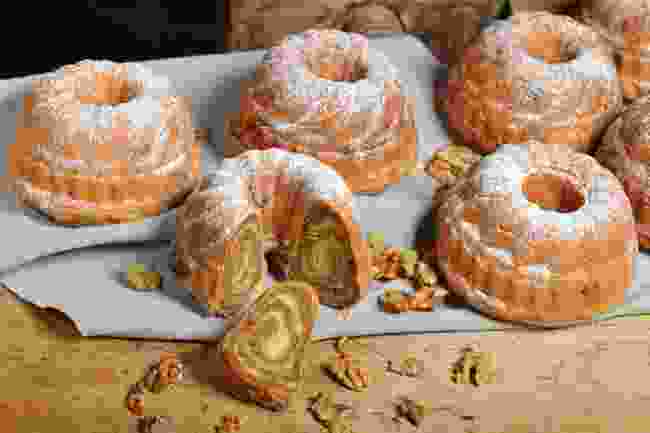 Of all the Slovenian delights to try, one of the sweetest literally and figuratively is Potica: a deliciously doughy roll flavoured with walnuts, hazelnuts, honey and sugar. It's traditionally a festive pastry, so a dash of brandy or splash of rum is rarely amiss.

It shouldn't be hard to come by, but if you're out of luck trying to taste this nutty dessert, we'd suggest searching for a local experience to help you make your own. There are sessions for visitors in Lake Bled, for example. 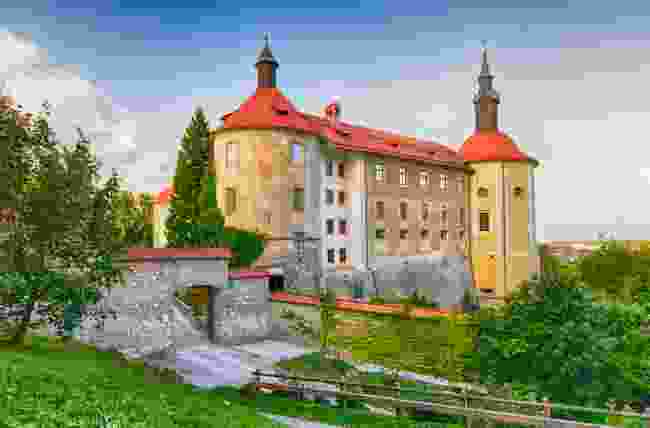 The castle of Škofja Loka (Shutterstock)

Škofja Loka is a fairy tale-and-a-half. It may be a small town, but it makes up for its stature with its breathtaking scenery: classic pale-coloured homes with sunny orange roofs, hugged by bushy green hills.

The setting of the Škofja Loka Passion Play, Slovenia's oldest piece of theatre, its protected as a UNESCO List of the Intangible Cultural Heritage of Humanity

It's well worth passing through for a day (or two if you can spare), if for nothing else but its centrepiece: the medieval Škofja Loka Castle and Museum. First built in the 12th century, the building you'll see today was made in the 1500s.

There's a short walk to the castle, and about two to three hours-worth of museum to explore. There's a mill, and a brilliant viewpoint with excellent views over the town, so bring your camera. 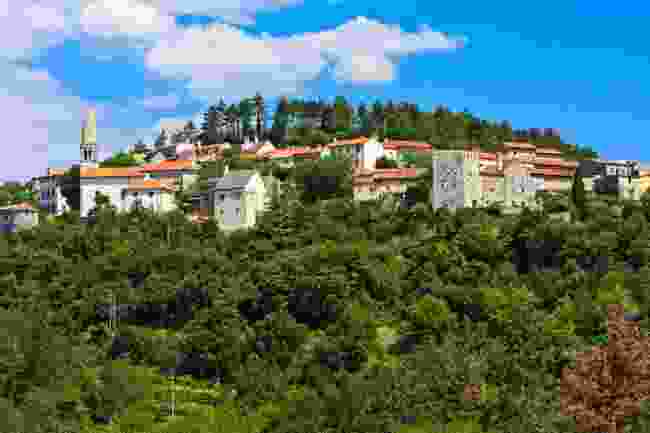 The view of Karst city Stanjel from the city walls (Shutterstock)

Those keen to learn local history will want to have Stanjel in their itinerary. Thought to be one of the oldest settlement in the Karst region, dating back to the 1400s, this village has centuries upon centuries of change to discover.

Notably, Stanjel was fortified in the 1600s to defend itself against raids during the Ottoman wars. Despite its historic significance, some of what you'll see - including the castle - has been rebuilt in the years following World War II, after fires swept through the village. 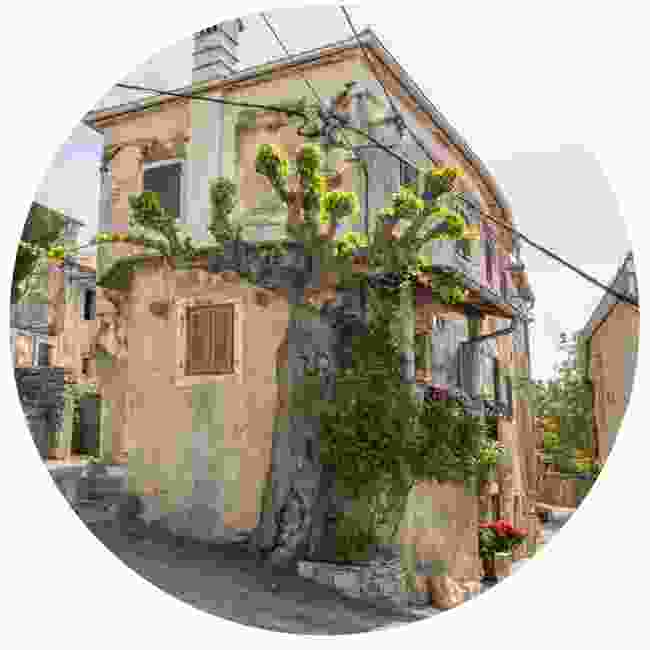 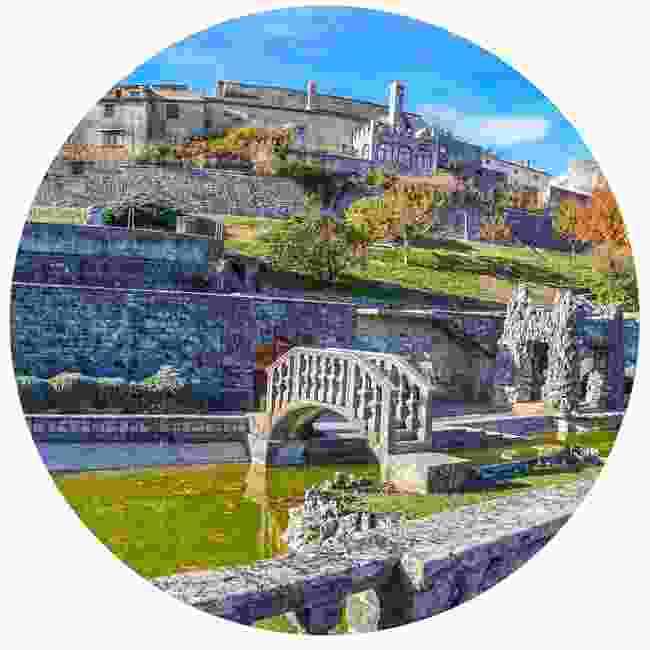 A panorama of the Ferrari Gardens in Stanjel (Shutterstock)

Do remember to enjoy some of Stanjel's natural beauty. Again, you'll want to get up high to get a killer view of the village from above. There's also Ferrari Garden, a lovely place to admire immaculate greenery, and while away an hour or two. 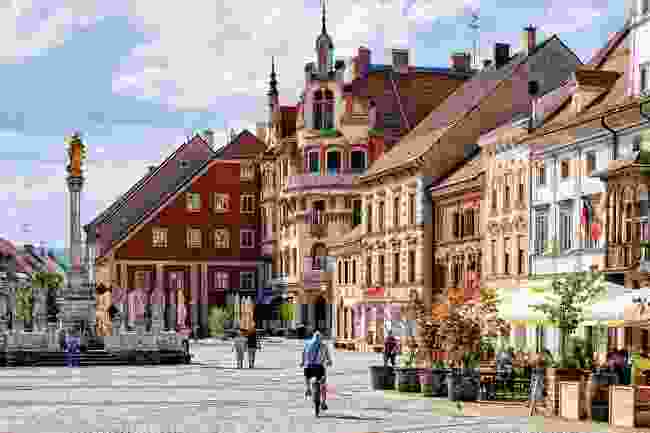 The town of hall of Slovenia's second city, Maribor (Shutterstock)

Slovenia's second city, Maribor, is not nearly as famous is Ljubljana. But if there's two things its known for, it's skiing – and then wine. We'll argue a case for the wine.

Set amongst the hills of Styria, Maribor's home to the oldest vine in the world. The region is known for its crisp white wines, which you'll be able to sample all over the city.

Go one step further than a makeshift bar crawl and meet the makers, explore the wineries and traverse the vineyards on a specialist tour. The Maribor Wine Trail is a fine place to start.

How to do a short break in Ljubljana

The best outdoor adventures in Slovenia