The 7 best things to see and do in Sintra, Portugal

Sintra's mystical landscape was designed to be admired by successions of artists and romantics. We've listed seven of its best attractions, plus budget-friendly visiting advice...

Portuguese royalty once retreated to the sanctum of Sintra: a mountainous landscape a stone's throw from Portugal's capital of Lisbon, partitioned by dense forest. The world's wealthy wanderers soon caught on, designing for themselves a romantic, fairytale-like landscape now referred to as the Portuguese Riviera.

How to visit Sintra, Portugal on a budget

Thanks to transport links and cheaper accommodation options, Sintra is no longer reserved for the wealthy - it's totally possible to visit on a shoestring. Hire a car from Lisbon airport, and use one of the nearby towns as your base for exploring the area.

Colares, for example, is a no-frills town with a smattering of cheap hotels and B&Bs, restaurants, and a gorgeous coastline with several beaches including: Praia das Maçãs (a large, clean, family-friendly sandy beach), Praia Pequena do Rodízio (a quieter beach enclosed by steep cliffs), or further south, the spectacular beaches Praia da Ursa and Praia da Adraga (a little more difficult to access but totally worth the journey).

Driving into the Sintra hills can be hellish in the peak season, though. Use local buses instead, a charmingly old-fashioned tram, or park your car near Portela di Sintra train station for free and make the 20 minute up-hill walk to the old town.

Now, here are the 7 best things to do in Sintra, Portugal... 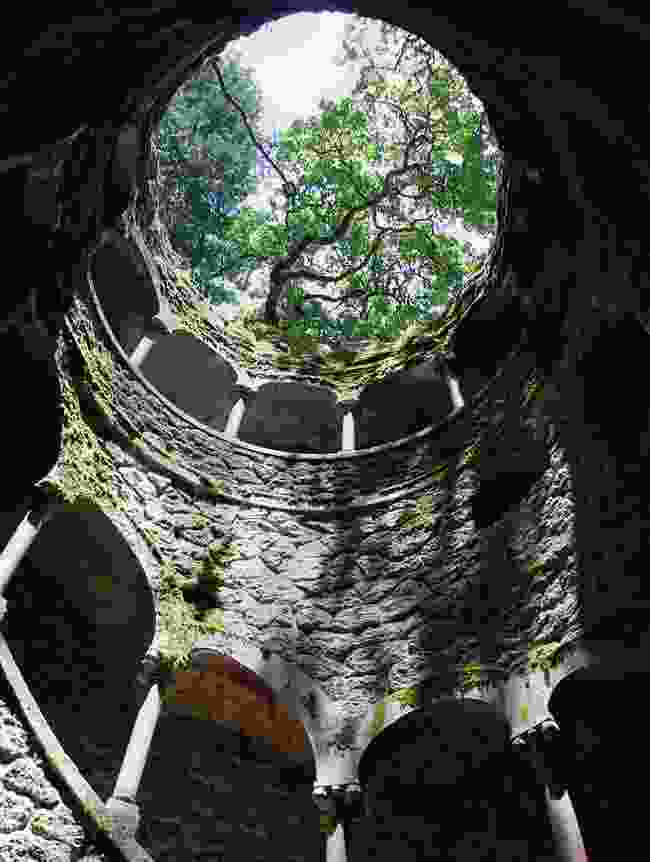 The Tolkien-esque landscape of Quinta da Regaleira is a fantasy of seemingly forgotten architectural curiosities, ethereal grottos and secret gardens.

The estate, built in the late 1800s, was the brainchild of eccentric entomologist António Monteiro, whose zealous interest in literary iconography was brought to life by architect Luigi Manini.

Today, the estate is recognised as a UNESCO World Heritage Site within the Cultural Landscape of Sintra. Its grounds have been artfully left to romantic rack and ruin; among its most atmospheric extravagances are The Waterfall Lake and The Initiation Well (pictured).

As one of the principle sites of Sintra, it can get extremely busy from late morning to mid-afternoon, so travel early or late to avoid the day-trippers.

Visiting information: Opens from 9.30am to 8pm from April to September, and 9.30am to 6pm from October to March - last entry is one hour before closing.

Entrance costs €5/€8/€5 for young adults/adults/seniors, and is free for children under five, seniors 80+ and people with disabilities. 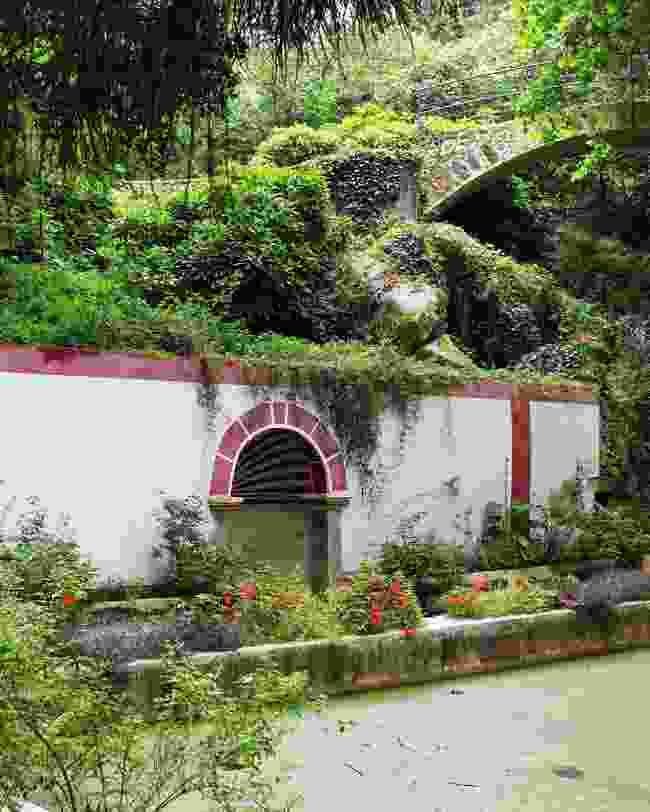 Pena Palace is often the first point-of-call for day-trippers from Lisbon, who spend time exploring the cartoon-like castle and its ramparts, not leaving enough time to explore the grounds - which, given their beauty, is tantamount to criminal!

While the castle is in itself a spectacle of Romanesque and Romanticist style, its grounds deserve exploration too.

Descend the park's winding paths and spend time with a picnic at the Tank of the Friars, the greenhouses, or The Valley of Lakes; their eerie, forgotten-world opulence are emblematic of the region’s Romanticist landscape.

Visiting information: The park and palace are open from 10am until 6pm from October to March. From April to September, the park is open from 9.30am until 8pm, the palace closing at 7pm.

Budget-friendly tip: Visiting the Park and Palace of Pena is half of the above prices if you wish to visit the grounds only - you’ll get the view of the castle anyway.

3. Sit in quiet contemplation at the Convent of the Capuchos 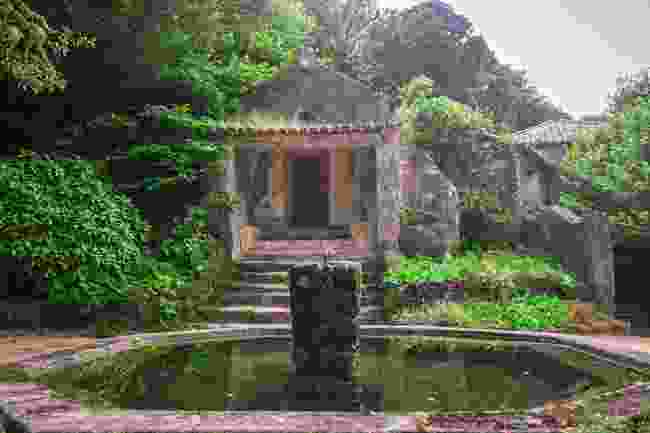 Convent of the Capuchos, Sintra (Dreamstime)

High in the Sintra Mountains lies a quirky relic from an ancient past - a Franciscan friary built in amongst giant boulders surrounding the mountain's edge.

The friary was once a figment of a man's imagination. According to local legend, Dom João de Castro, a Portuguese nobleman, dreamed of the religious retreat while sleeping in the forest after a hunt. Believing his dream to have been a divine message, he conveyed the vision to his son. Dom Álvaro de Castro commenced the building of the convent, which was completed in the late 1500s.

One of the convent’s unique features is its patchwork of cork accoutrements, harvested from nearby trees. Cork would have been an ideal material in the building of the monks’ frugal living quarters - its properties allow for insulation from the cold in winter, relief from summer heat, cushioning, and rot- and pest-proofing.

Top tip: Hug the left of the convent, and eventually find your way to an enormous boulder that can easily be climbed for spectacular views over the city, and across to Lisbon.

Visiting information: Tickets cost €7/€5.50 for adult/child. The convent is open every day from 9.30am to 8pm in the summer season, and 10am to 5pm in the winter. This is ideal for surfers. Portugal is huge on the surf scene - a monster 80ft wave was the largest to have ever been surfed in the world, which took place in Nazaré, around 60 miles north of Sintra.

The turbulent shorelines explain why upon visiting many of the region's white-sand beaches you'll find them nearly deserted. The water's undercurrents and riptides can be dangerous to swim in, and as such the numbers of people prepared to travel to them are limited. Flags are in place on every beach signalling whether it's safe to swim, so you can rest assured it's still absolutely possible to charge into the sea, just make sure you check the flags first, and if in doubt speak with the lifeguard.

5. The Castle of the Moors The Castle of the Moors, Sintra (Nora Wallaya)

The Castle of the Moors (Castelo dos Mouros) is a castle constructed in 800AD during the Islamic period in medieval Iberia. The castle’s cobbled paths scuttle over the contours of the mountains, protecting the fertile land within which was Moorish territory at the time.

Walking the paths reveals to you possibly the best panoramic views in Sintra - the entire city is visible, along with Pena Palace in the distance. In the summer months, hundreds of hydrangeas bloom within the grounds.

The site is of significant historic interest and is currently undergoing excavation, though visiting is still possible. Archaeologists have traced the dwelling’s past back to the Bronze Age, and numerous ancient artefacts have been unearthed including a vase dating back to the 5th century BC.

Visiting information: Opens from 9.30am to 8pm from April to September, and 9.30am to 6pm from October to March - last entry is one hour before closing.

Entrance costs €6.50/€8/€6.50 for young adults/adults/seniors, and is free for children under six years old.

6. Fall in love with the Park and Palace of Monserrate The Palace of Monserrate, Sintra (Dreamstime) 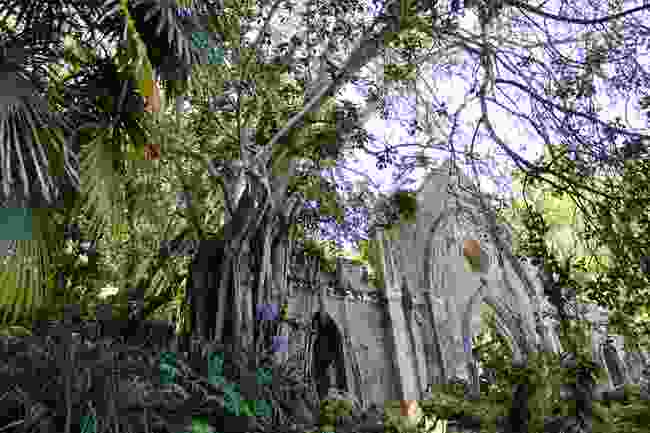 The poetic Palace of Monserrate was always meant to instil admiration in its beholders. It was built with the purpose of being a summer retreat for its wealthy owners and their guests, one of which included Lord Byron, whose poem Childe Harold's Pilgrimage was inspired by the property.

The palace, although small, is immaculately presented, with Moorish, Gothic and Romanticist architectural elements. One of the palace's highlights is the ruined chapel in the surrounding landscaped gardens, which was never actually a chapel at all but designed to resemble one in recognition of the palace's history.

The palace currently there was actually constructed over the top of the ruins of chapels created in 1000AD and the 1500s, and when Sir Francis Cook (a British merchant and art collector) took possession of the palace in 1856, he honoured the site’s history by building the faux ruin.

Visiting information: Opens from 9.30am to to 7pm from April to September, and 10am to 6pm from October to March - last entry is one hour before closing. 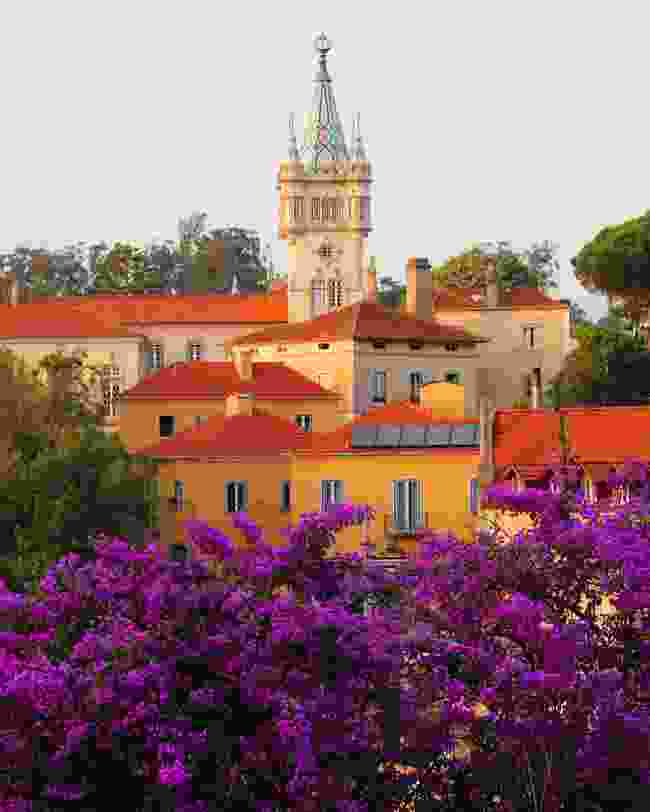 When you're finished exploring the many sights hidden within the Sintra Mountains, head to the historic centre of Sintra to browse the shops (which include genuine artisan ceramicists), spend time in the restaurants, or visit the Sintra Museum of Art and magnificent Town Hall buildings.

The historic Lawrence's Hotel, whose affluent guest list once included Lord Byron, serves moderately-priced, excellent food. Ask for a seat on the balcony to enjoy views across the mountains.

Top tip: While dining in the old town in the evening, ask to face west so you can see dramatic sunsets across wildflower-filled valleys.

One of the most beautiful spots to stand is by the historic Sintra train station, looking out to a valley bejewelled with blue agapanthus and morning glory flowers.